In two landmark rulings this morning, the Washington State Supreme Court ruled in favor of the City of Seattle in two lawsuits related to the city’s “First in Time” and “Fair Chance Housing” tenant protect ordinances.

These are two big, complex cases, so for background on the legal issues I encourage you to read my previous articles on the First in Time ordinance and the Fair Chance Housing ordinance. Also, here’s my summary from the oral arguments in front of the state Supreme Court last June.

On the “First in Time” case, the Court overturned a lower-court ruling that found the ordinance unconstitutional based upon a long legacy of precedential cases. In doing so, the Court also overturned those previous rulings — dozens of them.

A key issue in the case was resolving a conflict between the state’s working definition of property rights versus the U.S. Supreme Court’s definition; the two have diverged over the past few decades, with the federal courts setting a lower bar for justifying government restrictions on some property rights. In this morning’s ruling, the Court ruled that it had always intended to adhere to the federal court interpretation, but that federal courts’ interpretation had evolved since the last time the state Supreme Court had ruled, creating the apparent conflict. To resolve it, the Court stated its intention to follow the federal interpretation and disavowed all of its own previous rulings that were no longer aligned with that view.

As a result, the Court significantly narrowed the restrictions on the government’s ability to regulate the use of property, lowering the bar that the government must reach in order to justify the regulations.

The “Fair Chance Housing” ruling wasn’t on the merits of the ordinance itself, which is being tried in the federal courts. Rather, it was answering essentially the same property-rights question, as asked by the U.S. District Court judge presiding over that case: what is the proper standard of review for government regulation of property rights under Washington’s Constitution? And the state Supreme Court gave the same answer. While this doesn’t provide a final resolution on the “Fair Chance Housing” ordinance, it tilts the board heavily in favor of the city in predicting how the judge will ultimately rule.

Together, these two rulings are a devastating setback for property-rights advocates in Washington State, curtailing their ability to push back on government regulation specifically on the use of a property (though not necessarily on other property rights).

They are also a stunning application of the principle of “horizontal” stare decisis. Normally the Court follows its previous precedents, unless either it later finds the reasoning to be clearly erroneous, or finds that legal developments since those precedential cases have rendered them outdated or problematic. This is clearly the latter case, where the Court calls out several cases that recently clarified or modified how the federal courts interpret property rights. But the sheer scale of the flip by the Court is astounding: it lists TWO PAGES of cases that may no longer be cited as precedent. 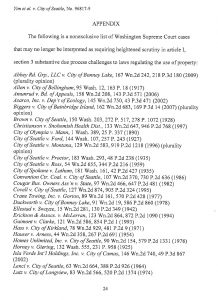 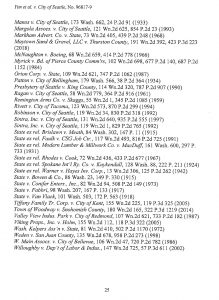 As an aside, having upheld the “First in Time” ordinance, the Court has essentially ruled that Rentberry’s rent-bidding service is illegal — it obviously violates the ordinance.

There is much more to be said about these two rulings — I will write a longer post later today with a deep dive.