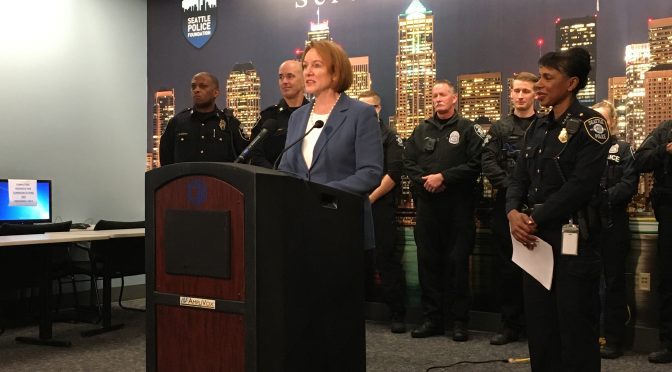 The nine areas of the city that will see extra patrols are:

The extra patrols are expected to be concentrated in high foot-traffic times on Thursdays, Fridays and Saturdays. When asked why these nine areas were selected and not other retail areas such as the one in the Central District, a spokesperson for SPD said that the police captains had selected these based upon the data available to them, and that they intentionally spread them across all five police precincts. They certainly didn’t spread them evenly, however, with four of the nine in the North Precinct — though none in Council District 5 (the home of Northgate). District 4 Council member Abel Pacheco will be happy, though: he has repeatedly requested that SPD deploy emphasis patrols in the University District retail core near the site of the future light rail station.

According to a press release, SPD is making separate plans for patrols on Black Friday and New Year’s Eve.

Durkan tried to distinguish the holiday patrols from the extra “emphasis patrols” that SPD has been conducting in pockets of the city where crime has been spiking, noting that SPD has deployed extra holiday patrols for many years and that “it’s a proven strategy.” That said, she also emphaiszed that she believes the emphasis patrols have worked well, saying, “The number one question I hear from communities is, ‘Can I get one?'”

Best added that this year’s holiday patrols are a 20% increase over last year.

Durkan also took the opportunity to put in a plug for the public-safety investments in her proposed 2020 budget, some of which the City Council has reduced or stripped out — including funding for some of the recommendations from Durkan’s task force on  “prolific offenders,” and investments in officer recruitment and retention programs. Best chimed in with her support for the Mayor’s proposal for recruitment and retention programs, saying “We have strained resources. Everyone I talk to says ‘we need more cops.’ We need it — it’s not a frivolous ask.”