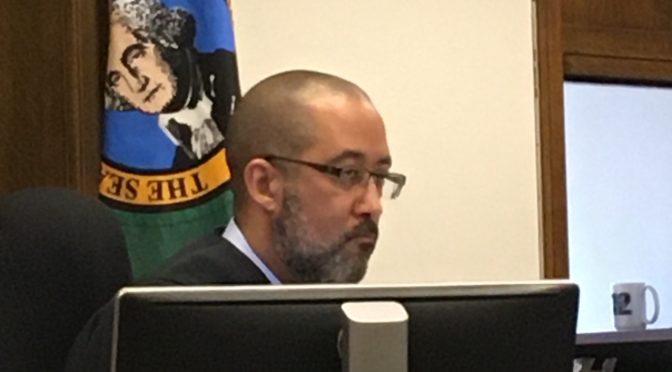 The ruling comes after a flurry of legal filings over the past week and a hearing yesterday morning in front of Ferguson. The judge grilled both sides on the finer points of their case.  The plaintiffs include the City of Seattle, King County, the Garfield County Transportation Authority, the Association of Washington Cities, and several transportation advocacy organizations from across the state.  The state Attorney General’s office is defending I-976, as is its responsibility to defend all of the state’s laws.

In order to grant the injunction, the plaintiffs needed to prove three things:

All three of these requirements were argued back and forth in court yesterday. The plaintiffs argued five different reasons why they believe I-976 is unconstitutional, with varying degrees of success. The strongest argument they put forward was that the initiative violates the “subject in title” requirement of Article II, Section 19 of the State Constitution, because the ballot title said that I-976 would limit motor-vehicle license charges to $30, except for “voter approved” charges — but didn’t clarify whether that including existing ones already approved by voters (it doesn’t — they are all repealed). See here for a full explanation of the other arguments they made.

In the end, this is the only one that Ferguson cited in his ruling this morning — though he only needed one. He did point out that he was not ruling definitively on the point, and there are plausible arguments that I-976 doesn’t violate the subject-in-title rule, all of which will be debated at length as the case moves forward. But for the purposes of a preliminary injunction, the plaintiffs met the requirement of showing that they will likely succeed on the merits (at least on that point).

The fact that he didn’t mention any of the other arguments is difficult to interpret. Ferguson’s questioning and comments at the hearing yesterday made it clear that he was less sympathetic to them, and he may simply be reserving judgment for the time being. But basing the injunction solely on a violation of the subject-in-title rule (which is highly subject to interpretation by judges) makes his ruling easier to overturn by an appeals court if the state chooses to appeal.

The question of immediate harm also was argued at length in the hearing yesterday. The state argued that governments have other sources of money to choose from, and whether they choose to de-fund transportation or shift funds from other uses is a policy decision they are free to make, thus there is no immediate harm; they also pointed out that Seattle, WSDOT, and other jurisdictions have reserve funds they can draw on — at least enough to get them through the next few months while the case plays out at the trial court level (though appeals could take months, if not years). On this point the plaintiffs made it harder on themselves by stumbling around in their description of the immediate effects of the implementation of I-976. They hastily filed an additional declaration late yesterday afternoon to bolster their case for immediate harms.  And in the end, the judge bought it, citing the strongest points: King County Metro must make decisions on spring transit levels by December 9, and if tax collection is halted next week, there is no mechanism for going back later to collect those taxes if I-976 is ultimately found to be unconstitutional (whereas if I-976 is blocked now and tax collection continues, governments can issue tax refunds later if it’s found to be constitutional).

The judge also noted that the timeframe for ultimate resolution of this case is not just a few months: it’s ultimately headed for the state Supreme Court, which means it will probably be more than a year before there is a final ruling. Because of that, he found that the balance of equities tipped in favor of the plaintiffs: eventually, they would all be forced to cut services, even if it took some number of months for some of them to reach that point. Those cuts would create “long-term hardships endured by Washingtonians whose lifeline transportation services were cut for those many months or years, whose transportation work-hours were reduced or eliminated completely, and whose transportation projects were unfinished or never started” — harms which “could not be retroactively mitigated.”

With the preliminary injunction now in place, the judge requested both sides to confer and provide the court by December 5th with a proposed schedule for moving the case forward. In the meantime, the state must continue to collect motor vehicle excise taxes as it has been doing, as if I-976 had not passed.

Because I-976 is a Tim Eyman initiative, it of course comes with the Tim Eyman side-show. This was on full display yesterday, as Eyman disrupted the court proceedings at the end of yesterday’s hearing to try to argue his own points as to why his initiative is constitutional. Ferguson wasn’t having any of it, though, and quickly shut Eyman down, pointing out that he is not (currently) a party to the case and thus has no standing to address the court.  (I was personally disappointed that Ferguson missed his opportunity to tell Eyman to “take a seat.”)

While Eyman has not officially moved to become a party in the lawsuit, he is supporting a group of taxpayers who have moved to intervene in the case by giving them a declaration in support of their effort. The taxpayers are asking for a change of venue, arguing that because King County is a party to the case, any King County Superior Court judge, whose paycheck comes from the county, has an inherent conflict of interest. This is a nonsensical argument; King County is a party in cases in King County Superior Court every day. And using that logic, there is no court in Washington State — including the state Supreme Court — that could hear this case, since the State of Washington is the defendant. The legal brief filed by the intervening taxpayers is a whirlwind of tortured logic and legal mumbo-jumbo.

After the hearing adjourned yesterday, Eyman picked a fight with the lawyers from the Attorney General’s office, arguing that they were doing a terrible job of defending his initiative and should turn over the defense to a third party because the Attorney General is prejudiced against the initiative. He continued his rant for several minutes before the media’s cameras in the hallway outside the courtroom.