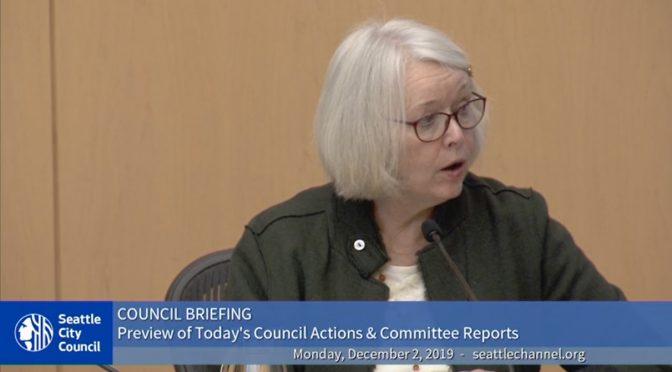 It’s shaping up to be an important week for the proposal to create a regional governance structure for responding to the homelessness crisis, with Thursday being the key day.

This morning Council member Bagshaw, who has been leading negotiations with King County and other stakeholders on behalf of the City Council, laid out for her colleagues where the negotiations stand and what the next steps are.

She explained that late last week there was a long conference call among the stakeholders to hammer out details of a new proposal, after the one that Seattle Mayor Jenny Durkan and King County Executive Dow Constantine negotiated failed to gain the support of their respective councils or the mayors of smaller cities in the county. After follow-up exchanges over the weekend, Bagshaw said that the parties are “so close” to having a deal struck. Here’s the parameters of the deal, as Bagshaw described them:

Thursday morning, the King County Council is scheduled to discuss the proposal in committee. Bagshaw is attempting to schedule a City Council committee meeting for Thursday afternoon to consider the same proposal, though some of her colleagues have concerns about the short amount of time between those two meetings and whether they will have enough time to understand any changes the County Council proposes.  However, time is not on their side: the City Council’s last full meeting of the year is scheduled for Monday, December 16th, so if a proposal is to be approved before the end of this year, it needs to be voted out of committee either this week or next week. And if the City Council wants changes made to the agreement, those will need to go back to the County Council for its approval too.