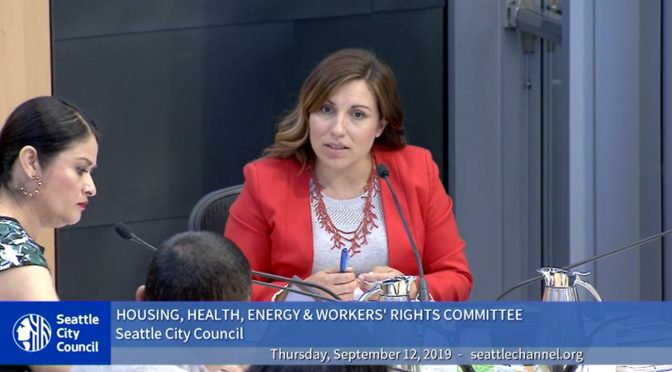 Earlier this year, Initiative 124 was working its way through the court system — and losing badly. But over the summer Council member Teresa Mosqueda rewrote it to address its legal shortcomings, successfully shepherded the reworked version through the Council’s legislative process, and got the Council to repeal the original I-124 ordinance.

That solved the problem with the main lawsuit. But there is a second lawsuit that has been in limbo while the first one played out, and the plaintiffs in that case are forging ahead with their narrower legal challenge.

The primary issue in the first lawsuit was that I-124 seemed to violate the “single subject” rule for legislation; it covered multiple subjects that weren’t closely related enough to each other to withstand accusations of legislative “logrolling.” In rewriting it, however, Mosqueda broke it up into four separate ordinances, and passed each one separately; she also took the opportunity to address some of the policy shortcomings that had been raised by critics of I-124. Doing so effectively mooted the question of whether I-124 violated the single-subject rule, and also took some of the wind out of the sails of the critics. The lawsuit was dismissed in October.

The second lawsuit, however, lives on. Filed by the ERISA Industry Committee (aka ERIC), it alleged that the provision of I-124 that required hotel employers and ancillary businesses to provide health insurance for their employees is pre-empted by federal law. That case was put on hold while the first one played out; at most the second one would have invalidated only one part of I-124 while the first one looked to throw out all of it, so in the spirit of “judicial economy” it made sense to let the big case run its course and possibly moot the second one.

And in the end I-124 was repealed by the City Council, and the health insurance provision was replaced with a new ordinance that attempts to accomplish the same end through a different means — one that Mosqueda hopes will withstand legal scrutiny. However, in a court filing today ERIC said that it believes the new ordinance is also pre-empted by federal law. With the assent of the City of Seattle, it is asking the court to lift the stay on the case and allow it to file an amended complaint that would remove the references to I-124 and restate its argument based upon the replacement ordinance.

ERIC doesn’t lay out the details of its new argument, but it’s safe to assume it follows the contours of the old one. The federal preemption clause reads:

Case law has interpreted this to mean that any state or local law that “makes reference to” or “is connected to” an employee benefit plan is pre-empted.  The new ordinance is carefully constructed to try to avoid pre-emption, and is more of a “minimum wage” ordinance where compensation is defined to include healthcare expenses. It thoroughly scrubs the bill of references and connections to ERISA benefit plans. Instead, it declares its intent to ensure that hotel employees have access to quality healthcare through additional compensation. It falls back to listing minimum employer healthcare expenditures, while giving employers several additional options for qualifying expenditures other than paying for a health plan — including just paying the amount directly to the employee.

The rewrite is modeled after the City of San Francisco’s Health Care Security Ordinance, which similarly requires the city’s employers to make minimum payments for employees’ healthcare expenses. The HCSO was challenged in court as a violation of the ERISA pre-emption, but in 2008 the 9th Circuit Court of Appeals ruled in the city’s favor, finding that the ordinance was legal.  So the closer Seattle’s healthcare ordinance for hotel workers is San Francisco’s HCSO, the more likely it is to survive legal challenges.

Nevertheless ERIC believes it still has a case, the City of Seattle believes it doesn’t, and the courts will have the final word. Assuming the court grants ERIC’s motion (it likely will), the schedule looks like this:

Needless to say, expect this case to take to the end of 2020 to be resolved — and possibly longer.