This morning, the newly-seated City Council passed out of committee two bills that are part of Council President Lorena Gonzalez’s “Clean Campaigns” legislation package, leaving one more to receive additional tooling over the next three months. 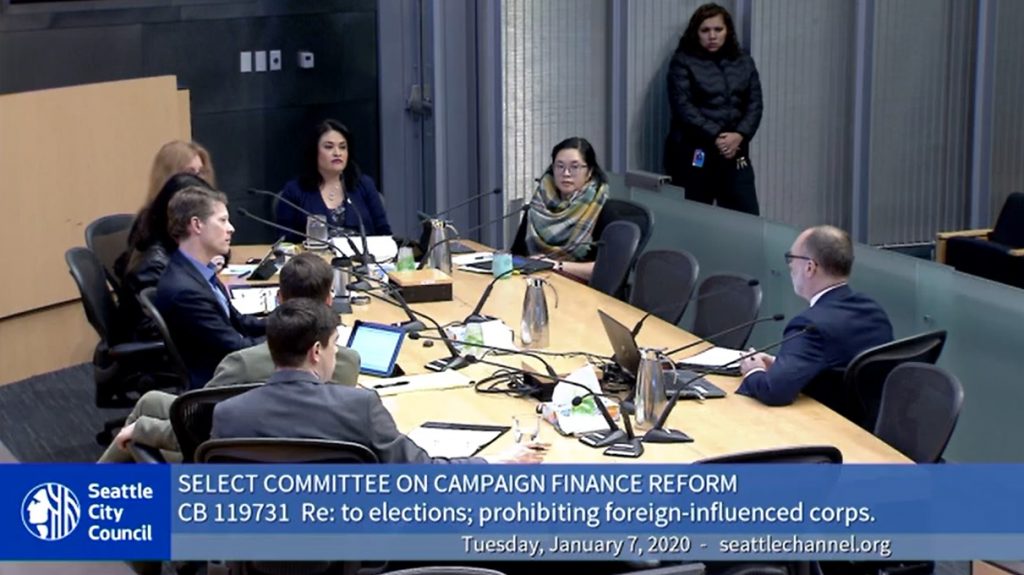 As I reported earlier this week, what was originally one bill has now been split into three:

The first bill is not controversial, and there is ample case law empowering governments to require reporting for political communications. That was voted out of committee this morning, quickly and with no last-minute amendments.

The second bill, prohibiting contributions from “foreign-influenced coroprations,” was also voted out of committee. There was a brief discussion of whether data exists as to how many of the corporate contributions in the 2019 City Council elections would have been prohibited under this rule; Council staff said that the data would be difficult to come by, and certainly not by next Monday when the bill comes up for final vote in the full Council. The bill would require that companies making contributions self-certify that they aren’t foreign-influenced as per the definition in the bill, making enforcement somewhat easier: corporations have that information on their own shareholders, but don’t necessarily publish it. However, there are still policy and legal questions as to whether the threshold for “foreign-influenced” is set too low: a single foreign shareholder with 1% ownership, a group of foreign shareholders with 5% ownership collectively, or a foreign national holding a position in the corporation with influence over political decision-making. This is far stricter than the current federal limitation, though it’s widely agreed that the federal law is much too lenient and full of loopholes. But under this rule, Amazon, Uber and AirbnB would all be declared “foreign-influenced” and prohibited from making contributions at any level, whereas membership-based organizations including unions and labor advocates would not, regardless of the percentage of their membership that are foreign nationals. Needless to say, this will get challenged in court: government limits on political speech face the toughest restrictions, known as “strict scrutiny,” and must not favor certain parties over others; on the other hand, there is clear precedent for prohibiting foreign influence in U.S. elections. It will be interesting to see how this plays out — and there’s a good chance it will go all the way to the U.S. Supreme Court.

The third bill, placing limits on contributions to campaigns for city offices and to PACs spending money on those elections, saw one amendment but was held in committee for additional work. The amendment did two things:

The bill, which will apply to all PACs — including corporations, unions, business associations, and neighborhood groups — was held in committee in order to further develop the “legislative record” before it’s passed. In other words: they want to make it as solid as possible before it gets challenged in court, by backing it up with data and other evidence. As I’ve written before, this bill is a “hail mary” pass to try to undo some of the damage done by the Supreme Court’s ruling in Citizens United, in which the Court ruled that independent expenditure committees do not create an appearance of corruption and therefore IE expenditures may not be limited. In the aftermath of that ruling, two federal Courts of Appeals — including the 9th Circuit, which covers Seattle — have interpreted the Supreme Court’s finding that IEs don’t create an appearance of corruption and concluded that therefore contributions to IEs also may not be limited. That is potentially in conflict with a separate Supreme Court ruling that predates Citizens United, in which the Court stated that there may be acceptable reasons to limit contributions. But since neither of the recent Appeals Court rulings were appealed to the Supreme Court, there is no final word on that question.  So once this bill passes, it will get challenged in U.S. District Court in Seattle; there the judge will strike it down because of the 9th Circuit precedent that it is required to follow. It will then get appealed to the 9th Circuit, which most likely will follow its earlier precedent and affirm the lower court ruling. From there it will be appealed to the U.S. Supreme Court, which may or may not decide to hear the case. And since litigants may only introduce evidence and legal arguments at the district court level (with few exceptions), if the city wants to win this case it needs to have all its ducks in a row from the very beginning — thus the extra time and effort now to develop the legislative record.

A few other notes about these three bills:

Thanks for reading to the end!  Articles like this one take a lot of time and effort to research and write. If you find my reporting valuable, please consider making a contribution to support my work.