A few things happened this past week related to the city’s Consent Decree over biased policing.

First, the city delivered what may be its final annual report on the use of force by SPD officers. The report is chock-full of statistics, charts and graphs on the types of force used by officers, who it’s used on, how SPD reviews incidents where force is used, and the results of those reviews.

The 2019 report, by and large, is not much different from last year’s. SPD’s use of force remains low, and there aren’t substantial changes in the types and applications. Last year officers were dispatched 850,910 times in response to 396,755 events. Across those dispatches and event, officers used force only 1,264 times over 675 events — .15% of officer dispatches.  The vast majority (77%) of those uses of force were “Type I,” the lowest kind, representing either brief, transitory pain or an officer pointing (but not firing) a weapon at a suspect. “Type II” force, described as “force that causes or is reasonably expected to cause physical injury greater than transitory pain but less than great or substantial bodily harm,” was 21%; and “Type III,” “Force that causes or is reasonably expected to cause great bodily harm, substantial bodily harm, loss of consciousness, or death, and/or the use of neck and carotid holds, stop sticks for motorcycles, and impact weapon strikes to the head,” was 1.5% (include officer-involved shootings). 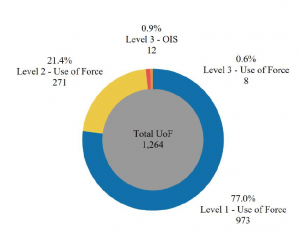 Here’s a breakdown across the last few years:

While it looks like there is a big drop-off in the use of “Type I” force, it’s an artifact of a change in how complaints of handcuff pain are classified: they used to be classified as “Type I” but now are tracked separately (and SPD is using new handcuffs that are intended to be more comfortable). SPD reports 827 complaints of handcuff pain in 2019; adding that back in, the Type I use of force statistic is nearly unchanged from last year. The Type II use of force declined significantly, though. And the Type III numbers are too small to have useful trendlines, and small fluctuations from year to year look like a big percentage change.

It has been well-known and well-documented that SPD’s use of force is disproportionate towards persons of color. That continues to be true. Here are the numbers from last year’s report: 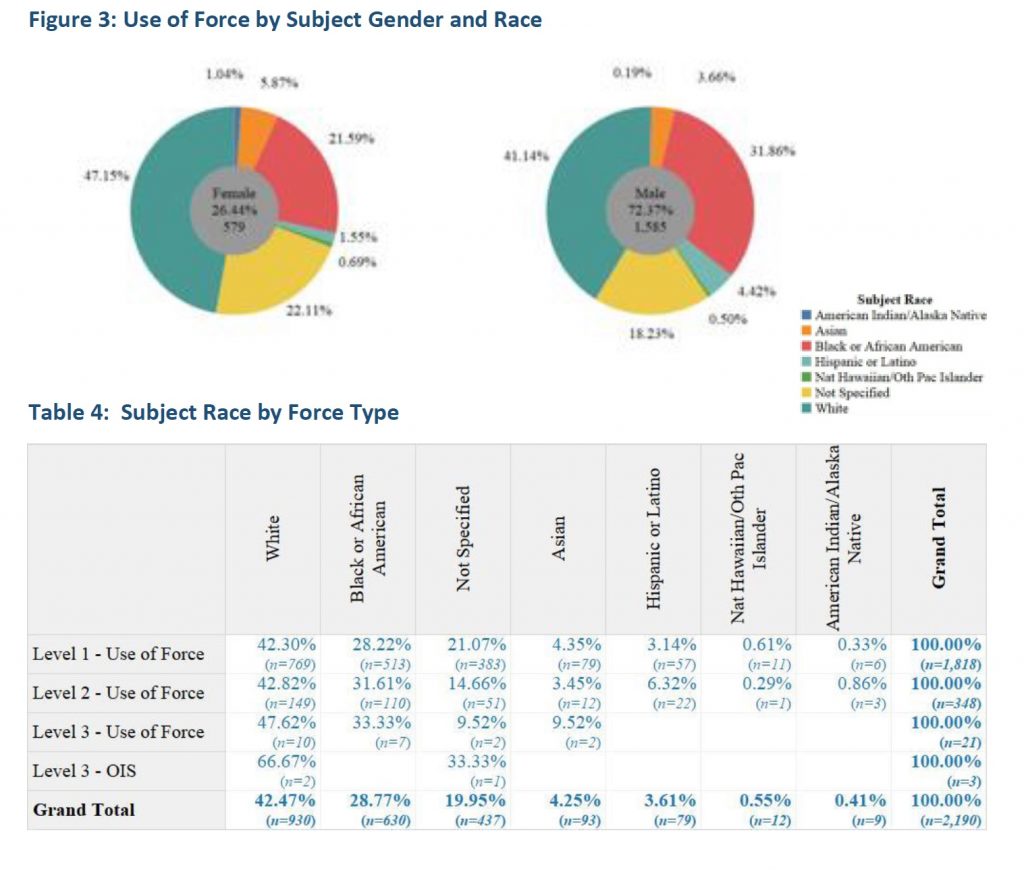 The changes are small, not enough to signal a trend. It is curious (and somewhat eyebrow-raising) that the percentage of male suspects whose race is “not specfied” increased — and was almost 1/4 of the men. That’s a lot of missing data, and could hide an underlying trend. I’m not suggesting anything nefarious, but someone at SPD should be looking into why so many of the recipients of officers’ use of force don’t have data related to their race.

A quick shout-out to the data wonks at SPD, who for once realized that a trend-line on a chart doesn’t have to be linear (though it is an apples-to-oranges comparison with the change in classification in 2019). 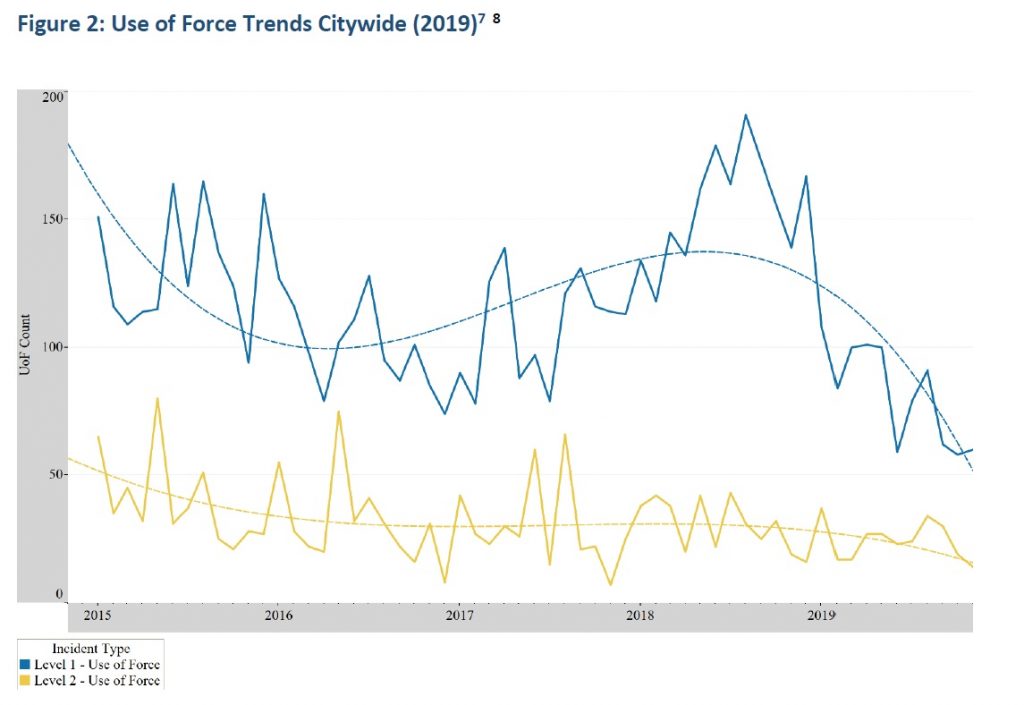 The second event this week was that the Police Monitor filed an assessment of the Office of Police Accountability (OPA). This was a follow-on study to an assessment by the Monitor from January 2016, which found several issues with the office (which to be fair, was still new at the time).

The new report praises the OPA for several improvements in the timeliness of its investigations, and for an adjudication-review “Director’s Certification Memo” process that is “among the strongest [they] have seen.”  OPA raised the number of investigations it completed within the required 180-day timeline from 75% to 95%. The reviewing team found that the quality assessment of OPA investigations remained steady, with 81% judged as “adequate” or better. 19% “inadequate” is an issue, however, and the Monitor and the reviewing team provided OPA with several recommendations on changes to make to improve the quality. Those include:

Finally, this week was the deadline for the CPC and the Department of Justice to respond to the city’s evaluation report on its police accountability system. Curiously, the DOJ did not file a response. The CPC, however, did, and indicated its determination to continue its spat with the Mayor and SPD.

In the introuction to the consultant’s assessment report, which was submitted to the Court last month, it says:

The City of Seattle has one of the most multi-layered and sophisticated oversight systems in the United States. Up to four civilian-led agencies can at some point have a role in reviewing or evaluating a use of force incident or a finding that an officer acted out of policy when using force. These agencies operate independent of and in addition to the units within SPD who investigate and evaluate force incidents (the Force Investigation Team, Force Review Unit and Force Review Board). The civilian-led agencies not only serve as a check on the SPD but on each other as well. The current state of accountability appears to be quite effective in no small part due to the commitment of city leaders, police officers, other city employees, and the public.
That does not mean that the current accountability system, though generally working as intended, could not see improvement in a few areas which this report identifies. The findings summarized below are based on 21CP’s site visits, interviews and review of records and are presented in greater detail throughout this report.

In its cover letter submitting the report, the City highlighted this section, saying, “The report’s Executive Summary concludes that Seattle’s disciplinary and oversight system is working as intended, while also pointing to areas in which the system could benefit from improvement”.

In its filing this week, the CPC took great offense at this, portraying it as the city and its chosen consultant trying to make the case that the current accountability system does not require reform. Last fall, Judge Robart cautioned the city not to use the consultant’s evaluation to try to make the case that Robart should reconsider his ruling finding the police accountability to be inadequate; the city promised that it would not do that, and has shown no sign that it intends to file a motion to reconsider. Nevertheless, the CPC denounced the city:

The City appears not have heeded the warning after all. The City submitted 21CP’s assessment on December 13, 2019, which only addressed the first part of the Court’s May 21, 2019, order. Dkt. # 598-2 (“the 21CP Assessment”). With the 21CP Assessment completed, the City now intends to address the second part of the Court’s order: developing a methodology to address the Court’s concern that “the old accountability system is inadequate for purposes of compliance with the Consent Decree.” Dkt. # 562 at 13. Despite the Court’s warnings, however, the City is already using the assessment to justify the current accountability regime, which the Court has found to be inadequate. According to the City, the 21CP Assessment “concludes that Seattle’s disciplinary and oversight system is working as intended,” and that there may be some areas “in which the system could benefit from improvement.” Dkt. 598 at 1 (emphasis added).
The CPC disagrees. The City’s synopsis is contrary to the Court’s conclusion that there is a “critical need for reform to that [accountability] regime.” Dkt. # 562 at 7. For the accountability system to work “as intended” it must be transparent, fair, just, and instill public confidence. The current regime falls short. That is why the City fell out of compliance with the Consent Decree. Vaguely referencing that the system “could benefit” from improvements suggests that the City does not appreciate the “critical need for reform,” and does not intend to submit a methodology strong enough to bring the City back into compliance.

The CPC’s critique is right on one major point: the city was directed by Robart to submit its methodology for reaching compliance along with the assessment, and it failed to do that. But its loud complaints that the city simply intends to defend the current system rather than work on further reforms rings hollow — especially since the city has invited the CPC to work together on defining the methodology for coming back into compliance. And the CPC sends a mixed message in its response, by both arguing that the consultant report is a pretense for making no changes to the current system, and also highlighting all of the recommendations that the consultant report raises that the CPC agrees with. But the CPC is nothing if not consistent: its brief fully reiterates its earlier critiques of the SPOG collective bargaining agreement, which rolled back portions of the 2017 police-accountability ordinance.

The CPC also included in its brief a letter that it sent to the city with its recommendations for topics to be negotiated with SPOG in the new round of contract negotiations planned for this spring. Again, the CPC reiterates its well-known list of issues with the current SPOG contract, which goes well beyond the four issues that Judge Robart has raised.

It’s not entirely clear what happens from here. In his order last fall, Robart noted that the city didn’t need his approval for the plan to assess the accountability system (though he gave it anyway), and presumably that extends to the actual assessment and the plan to come back into compliance. And at this point the city hasn’t asked Judge Robart to appprove the assessment report. So there is no question or motion in front of the judge that he is required to respond to. However, he has shown on more than one occasion that he is perfectly willing to drag the parties into his courtroom for a frank discussion if there is something that he is unhappy with. It’s unclear how he would feel about the consultant’s assessment report, or about the fact that the city didn’t deliver the methodology for coming back into compliance (or an expected date for delivering it). Perhaps Judge Robart will just sit back and wait to see what the city, the CPC, and the DOJ come back with. After all, this case isn’t wrapping up anytime soon: after the city figures out how to get back into complaince, which will likely require a new SPOG contract, it will need to sustain that compliance for another two years before it can ask Robart to terminate the consent decree.

Or perhaps Robart will tire of the bickering and decide to take a stronger hand in moving things forward.