Late last month, the consulting firm McKinsey published a new report looking at the cause of the deep homelessness crisis in the Seattle/King County area — despite the obvious prosperity the region is enjoying.

The report is a follow-up from one the firm published two years ago in the midst of Seattle’s head-tax deliberations. The new report gets right to the point: the homelessness crisis is due to a lack of affordable housing, and the crisis persists because the response effort has been aimed primarily at addressing the symptoms instead of doing the one thing that will solv ethe problem: building a lot more affordable housing.

In particular, it focuses in on the need for housing that is affordable for the lowest-income residents of Seattle and King County, noting that the number of units of housing available to households with income below 80% of the area median income (AMI) has declined over the past ten years. They present this in three charts: first a comparison of the growth rates since 2010 of the population (12%), jobs (21%), and income (12%) compared to the growth of the housing stock (8%). This has led to a 52% increase in market-rate rental prices over the same period. 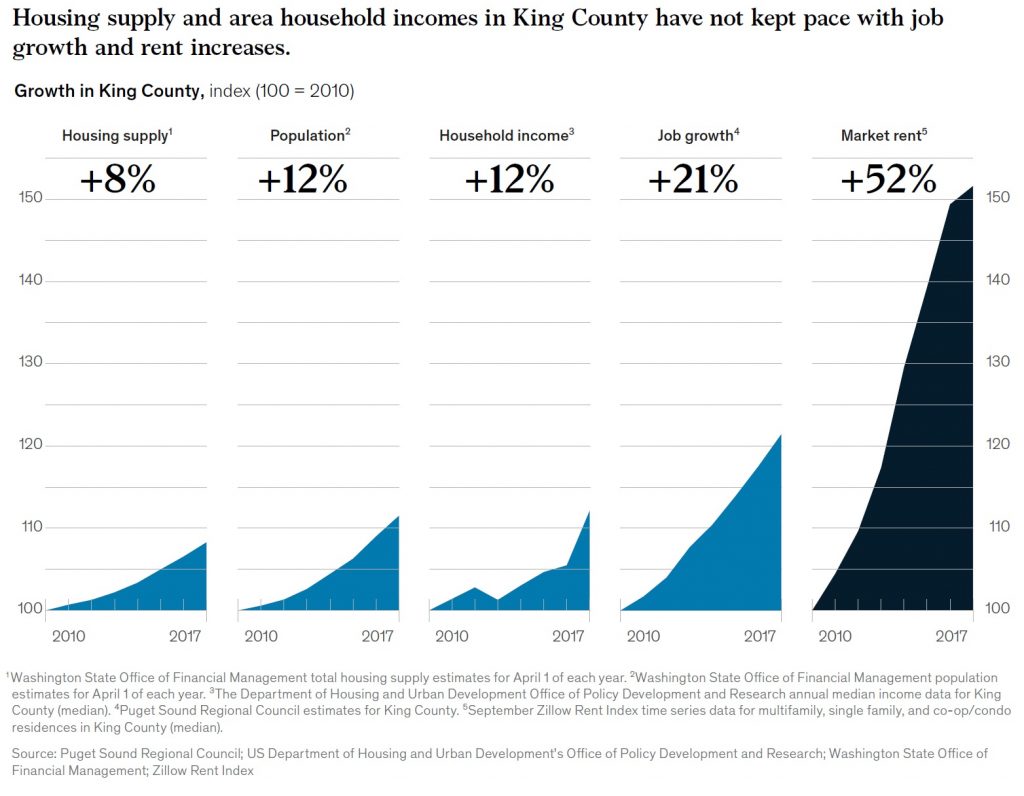 Having more money chasing a constrained pool of housing units has driven up rents, and in turn reduced the subset that is affordable to low-income residents — both because of rising rents and because of the demolition of older, “naturally affordable” units in order to build new market-rate units. 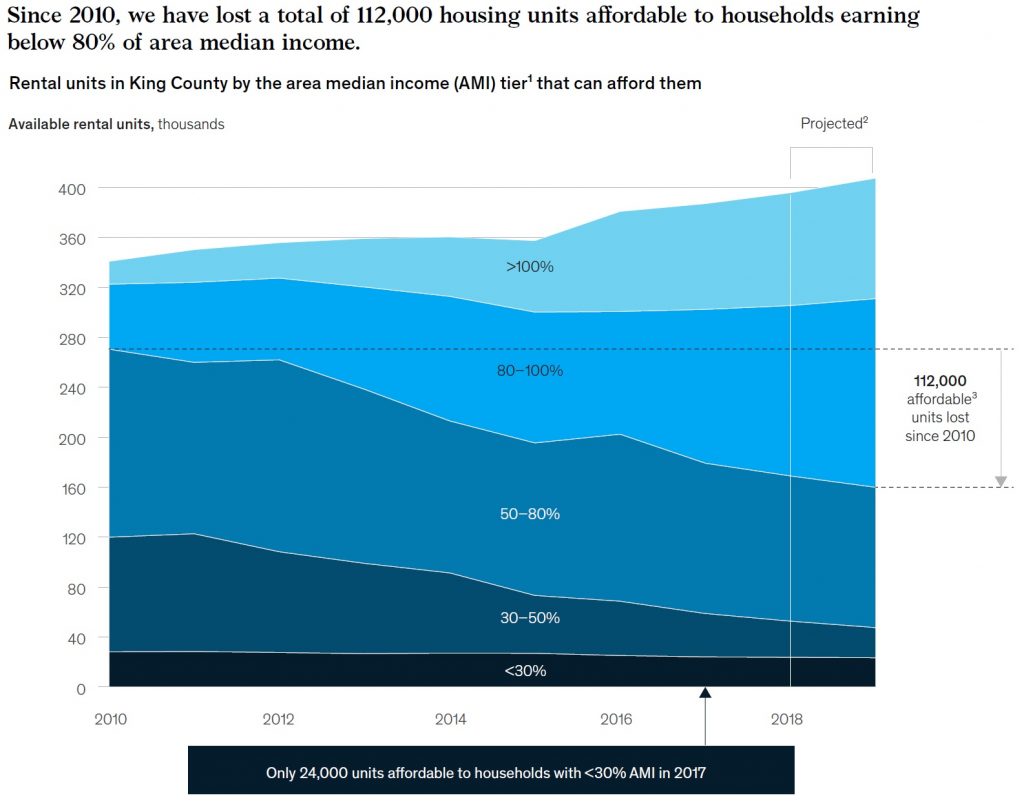 Because of this, the percentage of income that low-income households must spend on housing has continued to increase — with households earning less than 30% of AMI now spending over 60% of their income on housing.  If a household spends more than 1/3 of its income on housing, it’s considered rent-burdened. 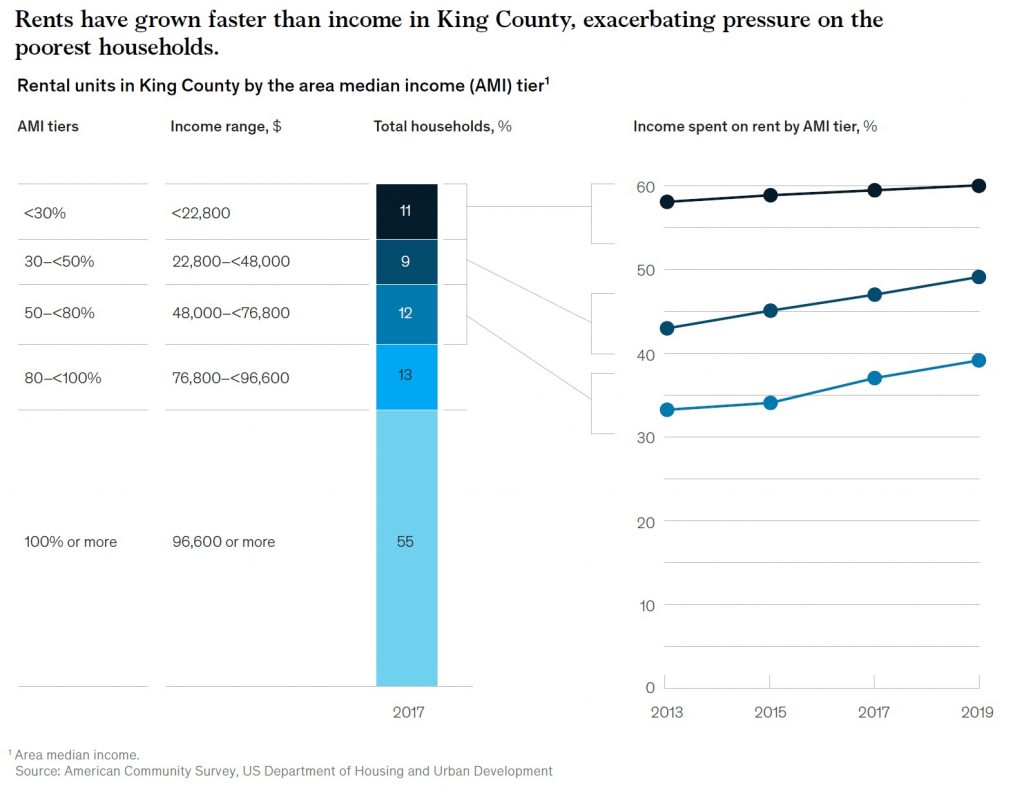 McKinsey breaks out how the portion of King County’s population making less than 30% of AMI in 2017 was housed, and identifies a gap of about 37,000 units needed for this population (not including the 17,000 households in the county receiving federal Section 8 vouchers to allow them to afford market-rate units). 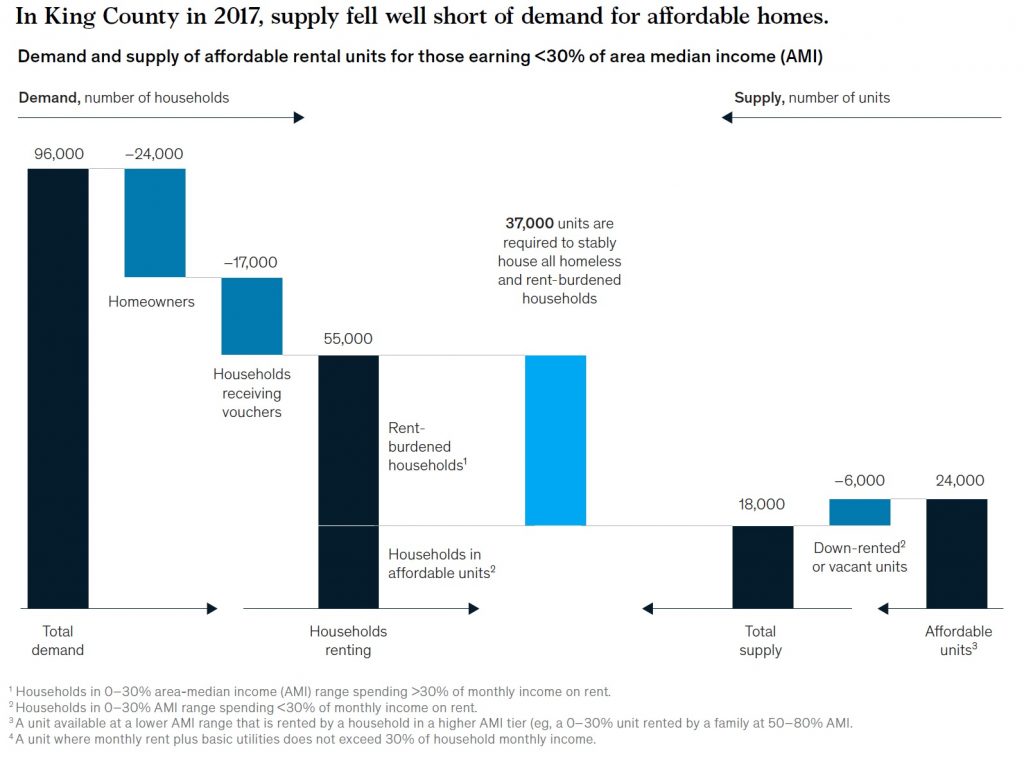 McKinsey then says the thing that the business community has been unwilling to say (though I’ve made the point several times):  there is no private market solution to deliver housing for this lowest-income group.

“Moreover, ELI housing is only rarely profitable and
therefore there is no incentive for the “market” to
solve this problem and meet the need for housing
for those in this bracket. Based on the current
analysis, it will take far too long for high-end
housing development to ever “trickle down” to ELI
households. It is inconceivable, for example, that
enough housing could be built to cause rents to drop
below the $600-a-month level that is affordable to
ELI households.

“For this reason, the public sector will play a critical
part in meeting incremental funding demands.”

Then comes the really bad news: the price tag for delivering housing for households below 30% AMI. They calculate a total cost between $4.5 billion and $11 billion over ten years, or $450 million to $1.1 billion per year. 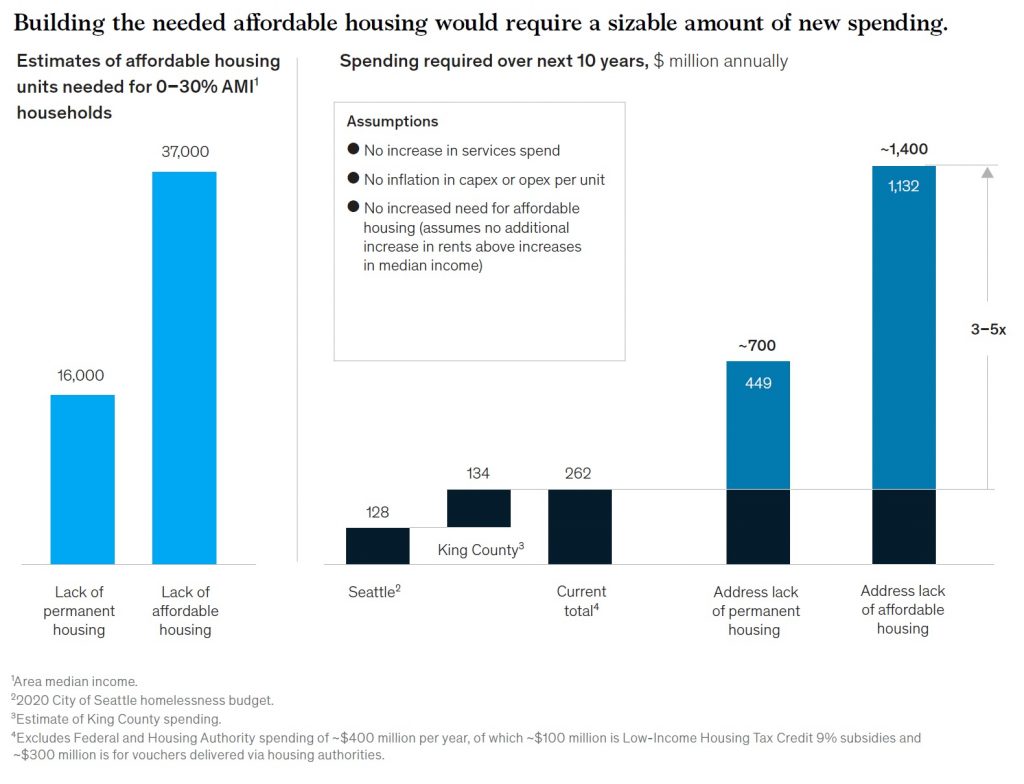 It should be noted that the money doesn’t all need to come out of King County taxpayers’ pockets; while a new affordable housing unit costs about $325,000 Seattle’s Office of Housing has become expert at leveraging matching funds and recently has been building units at a local cost of about $50-150 thousand. Nevertheless, it’s still an extraordinary amount of money.

It also must be pointed out that this only addresses the under-30%-of-AMI population, about 11% of households in King County. According to McKinsey’s figures, another 21% of households make between 30% and 80% of AMI and are also rent-burdened. The higher you go in that range, the greater the chance that market-based solutions could address the need for additional housing, but nevertheless there is still a substantial additional need for housing at price points that don’t rent-burden those groups. McKinsey’s cost calculations also don’t account for the ongoing expenses for operations and maintenance of the housing, or for “wrap-around” services such as mental health and substance abuse treatment.

But here’s the thing: this isn’t new information. In 2018 when the City Council was debating the head tax, it looked at the same issue and came up with similar figures (just for Seattle, not King County as a whole as the new McKinsey report calculates). We’ve known about this problem, but as a community we have been unwilling to confront it at the scale needed to address the problem.

It will be interesting to see if this time, with a respected business consultant confirming the same analysis, the conversation gets farther. At the moment, the state Legislature is debating a bill that would authorize King County to implement a payroll tax on employees paid more than $150,000, estimated to raise about $120 million per year — still a fraction of the need, but chipping away at the problem. And Seattle City Council member Kshama Sawant is organizing an effort to place a new “head tax” on the ballot in November (assuming the state bill passes and doesn’t preempt the city from passing its own tax).

Surprisingly, in its report McKinsey says the quiet part out loud: “Businesses must own their share of the problem.” Though they propose looking at a combination of contributions by the business community, including taxes:

“It is clear that business bears some of the
responsibility for the homelessness crisis. With
continued success comes renewed responsibility
to employees and communities. More companies
today are acknowledging that it is to their advantage
for employees to have access to affordable housing
within reasonable commuting distance from the
workplace, and for all citizens to live in a society
that provides access to basic human needs such as
housing for those in the ELI bracket.

“There is not a single, prescriptive position on
how best to fund needed ELI housing. However,
what will be crucial is dialogue between business
and the community to develop fair and effective
funding proposals.

“Business can do more to invest in initiatives such as
continuous education and worker-training programs,
transportation subsidies for those with lengthy
commutes, and flexible work schedules, among
others. Companies with robust balance sheets
might, for example, emulate Microsoft’s offer of low interest
loans to builders, especially if other funds are
available for operating expenses and debt service.”

McKinsey also points out that the annual societal costs for homelessness are about $24,000 per household, which is less than the building costs for a unit of housing (about $15,000 per year). Solving the problem is cheaper than not solving it.

A spokesperson for McKinsey confirmed that the study and report received no external funding and was completed as part of the firm’s internal pro bono efforts in its Seattle office.