On Friday, HB 2907, which would authorize a new payroll tax in King County on companies with employees earning more than $150,000, passed out of the Washington State House Finance Committee. But the road ahead is still long and bumpy, and what lies at the end is still far from clear.

You can watch Friday’s hearing here. It was interesting because while several amendments were proposed (mostly by Republicans in the minority), almost none of them were given any consideration as the Democrats have apparently decided to leave it up to the reconciliation process and a group of “stakeholders” to decide on any changes to the bill from its original draft. That won’t happen until after the Senate passes its companion bill, which as of this wrting hasn’t been scheduled for a hearing in the Senate Ways and Means Committee.

Nevertheless, the bill has received unprecedented support from the business community in King County, as well as from labor organizations — though not without qualifications.

The Downtown Seattle Association has published a list of its requirements for a new county tax, including prescriptive instructions on how the money may be spent.

The most contentious issue, however, is whether the bill will include a preemption for the City of Seattle to impose a similar tax on top of the county tax. The business community is pushing for a preemption — some explicity, and some subtly — and Seattle City Council members, as expected, oppose such a move. Council member Sawant has introduced a resolution opposing such a preemption, and has sent out emails to her “red army” requesting them to “pack City Hall” to demand that her colleagues support her resolution.

Sawant also put out a press statement reiterating the same points, and calling out Mayor Durkan for not taking a stand on preemption. Durkan issued her own press statement on Friday after HB 2907 was voted out of committee, ducking the question of preemption but instead saying, “The bill will continue to go through a robust and thorough process in the State Legislature, and I believe more input will make this bill better.”

In a conversation with a spokesperson for Mayor Durkan yesterday, I pressed for Durkan’s position on preemption — and got an interesting, if complicated answer. Here’s an outline of their logic:

To that end, the Mayor’s Office thinks that there are a wide variety of dials to be adjusted as the bill is amended.  It shared the City Budget Office’s revenue projections for the proposed King County tax, where we can see how they cam up with the estimate of up to $121 million of new revenues: 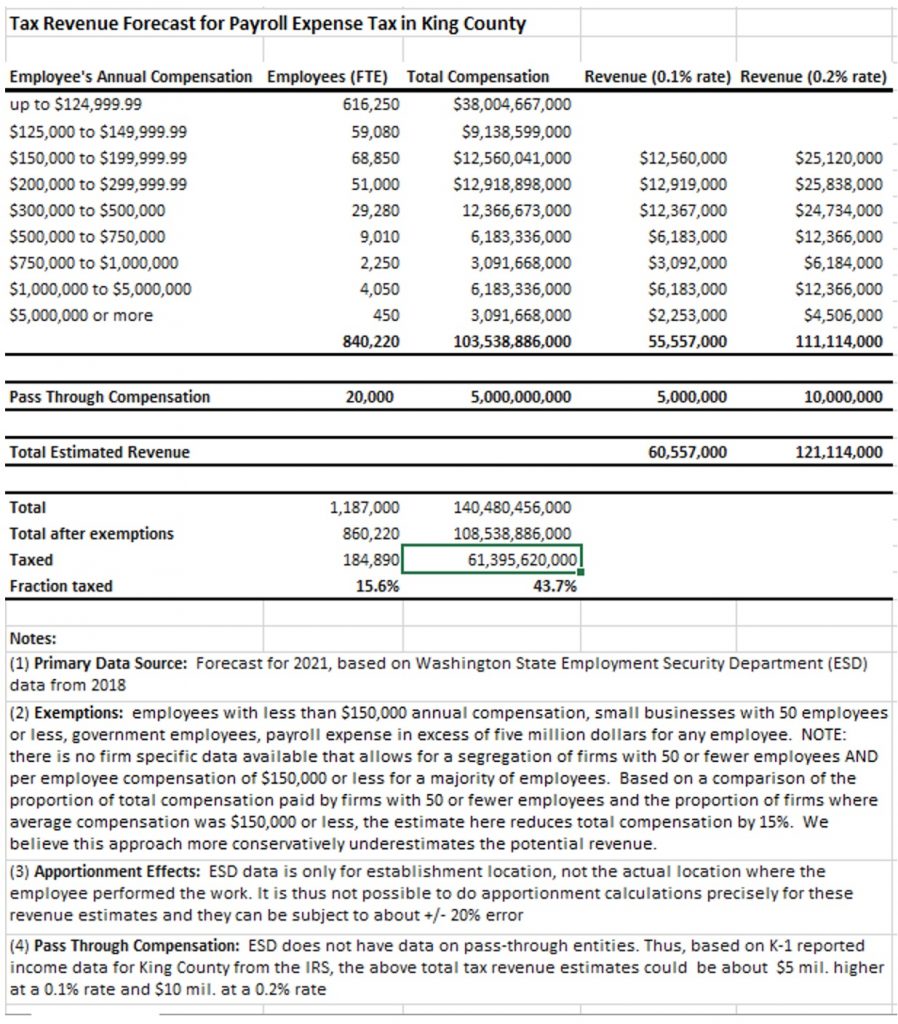 The Mayor’s Office points out that if the salary threshold were lowered from $150,000 to $125,000, that would sweep in another $9.1 billion of compensation and could result in an additional $18.2 million of tax revenues annually. Alternatively, raising the rate cap from .2% to .3% would increase revenues by $60.5 million. To be clear, the Mayor is not necessarily proposing those specific amendments; her spokesperson mentioned those simply to illustrate that there are many tweaks to the current proposal that have substantial impact on the tax revenues raised — and Seattle’s share of it. Thus the Mayor’s focus is on negotiating the complexities of the arrangement to the best outcome, rather than getting hung up on just the question of whether there is a full preemption of Seattle’s ability to impose its own tax.

The counter-argument to this, as Sawant states, is that even within the range of possible tweaks to the proposal, it will still generate far less than what is required to address Seattle’s housing and homelessness crisis. As I wrote about last week, the recent McKinsey report estimates that King County will need to spend between $450 million and $1.1 billion per year for the next ten years just on affordable housing for its lowest-income residents to meet the need (not to mention all the other needs going unaddressed: middle-income housing, behavioral health and substance abuse programs, etc.). While $121 million per year is a good start and can be leveraged (especially for housing) to get closer to the mark, we’re still way off, and it’s a fair question to ask whether the City Of Seattle should agree to a deal that restricts its ability to  meet the real target.

That brings us full-circle to look again at why, after opposing the “head tax,” the business community is now embracing a new payroll tax albeit with a preemption. There are four possible motivations:

The truth is probably some combination of all four.

That raises another tough question though: with a regional homeless authority now in place, why should 43% of the new tax revenues be passed through to Seattle? Why shouldn’t it all go to regional/county programs?  Because there are parts of the homeless and housing crisis response that King County simply isn’t good at. The best example is affordable housing: the Seattle Office of Housing excels at leveraging local dollars with matching funds from other sources, and at driving housing projects forward; whereas King County has shown itself to be fairly ineffective at those efforts. This probably needs to change anyway, since the availability and price of land for affordable housing projects is much better outside Seattle city limits — and because the homeless population is spread throughout the county — but for now the money will be better utilized by the city than by the county. It is also broadly recognized that King County, which in its division of responsibilities with Seattle for public health investments is responsible for  mental health and substance abuse treatment programs, has generally dropped the ball, and according to the spokesperson for the Mayor’s Office the city would like to have the resources to make its own investments in those programs where necessary to advance its own goals. Of course, there’s no guarantee that the city will fare any better than the county at spinning up mental health and substance abuse services, given the challenges with siting facilities and the critical shortage of trained staff in those areas.

Where does that leave HB 2907?  It’s still early days. The number of stakeholders at the table is large, and assuming it advances out of both houses, the final, high-stakes negotiation will not be easy and it is impossible to predict what the final bill will entail. Meanwhile, the Seattle City Council will probably pass its symbolic but otherwise meaningless resolution tomorrow opposing a preemption clause. Then we will all sit and wait for the state Legislature’s process to work its way through.