It’s become a common meme in political circles to claim that Amazon pays nothing, or next to nothing, in income taxes. But is it true?  Let’s dig in. 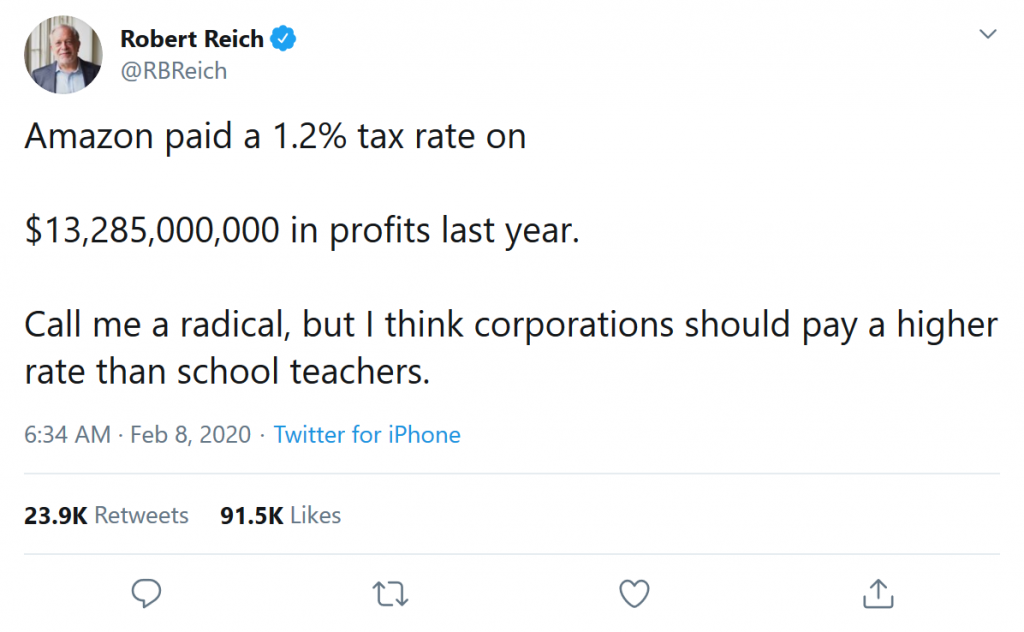 Amazon’s 2019 annual report, which was released two weeks ago, gives us a fair amount of data on Amazon’s income tax bill, both in the U.S. and abroad. But the details are complex, and the context in which the numbers are reported is also useful in interpreting the company’s profitability.

Caveat emptor: if you’re expecting me to draw a conclusion at the end as to whether Amazon is paying its “fair share,” you’re going to be disappointed. That’s a political and policy question beyond my pay grade. But hopefully I will provide some elightenment as to what they do pay, and how that compares with other corporations. Also, I’m not an accountant, but I was trained by a Fortune 500 company to read and understand corporate finance and earnings reports; there are almost certainly a few details I got wrong here or didn’t express as precisely as an accountant or lawyer would have, so if you are an expert and find an error, please send me a message and I’ll check it out and try to make corrections.

First, some background on corporate finance to help us understand Amazon’s finances. Large public corporations such as Amazon are required to keep at least four sets of books:

All four of these are different, though related, and they operate under different laws and rules. The most straightforward of the four is the cash flow books, since they deal with the ground-truth of actual dollars moving around. But the first two, the SEC and IRS books, operate under under a different set of accounting rules, referred to as accrual accounting. The essence of the accrual method of accounting is that the point in time when you record revenue or an expense is, in many circumstances, diferent from when money actually transfers hands. The rules for corporate accrual accounting are encapsulated in an industry standard referred to as Generally Accepted Accounting Principles, or GAAP. Both the SEC and IRS heavily influence GAAP, though it’s often the case that the SEC and IRS will decide their own rules for handling some specific case and at some point later those rules will get incorporated into GAAP.

The SEC’s rules are to ensure that companies can’t cook their books to make their company’s business look better than it really is. For example, when a company sells you a $100 gift card, GAAP and the SEC say that it can’t book the $100 revenues right away — it must wait until you actually redeem the gift card, because there is a corresponding expense that must be fulfilled. So it lists the $100 as “unearned revenues” and then accrues it to its earned revenues once you redeem it.  In a slightly more complicated example, if you buy a $120 annual Amazon Prime membership, Amazon doesn’t book the $120 in revenues up front; it accrues $10 every month throughout the year as it delivers the accompanying service to you.  Expenses work the same way: for example, if Amazon signs a 20-year lease for office space, then it will recognize a deferred expense on its books because it signed a written commitment, and then it will accrue the annual expense year-by-year over the course of the lease as rent is paid. The folks at the SEC explain that this makes sure  investors see what the company is doing today, but also gives transparency to everything the company knows will happen in future years.

The IRS’s rules are very similar, and also heavily overlap with GAAP. But they have to deal with tax laws passed by Congress that specify what gets taxed, and when certain taxes can be deferred.  A great example of this is “depreciation,” which is accountants’ way of acknowledging that property wears out over time and must eventually be refurbished or replaced — representing a “loss” for the company that can be written off as an expense. The SEC has rules about how many years it takes for different kinds of property to depreciate down to zero, and those rules allow companies to write off a portion of the depreciation every year evenly across that period. But the 2017 Trump tax cut included a provision allowing certain kinds of equipment to be depreciated on an accelerated schedule, giving greater tax breaks in the short term but balancing out in the long term. The net result is that the way depreciation is calculated for the SEC can be different from how it’s calculated for the IRS — so the value of an asset could be one thing according to the SEC, and another according to the IRS.

Amazon’s annual report to the SEC (known as a Form 10-K) is a public record. Its income tax filing with the IRS is not, however, though its 10-K still reports a great amount of detail on its taxes. The one catch, which we will see later, is that the 10-K reports the company’s taxes on an accrual basis, not on a cash-flow basis: we will see accruals for future tax liabilities and credits that don’t represent exactly how much Amazon paid in taxes to the IRS in 2019.

Here’s the top line summary of Amazon’s 2019 fiscal year in its 10-K report; note these are worldwide figures, not just U.S.:  (click to expand) 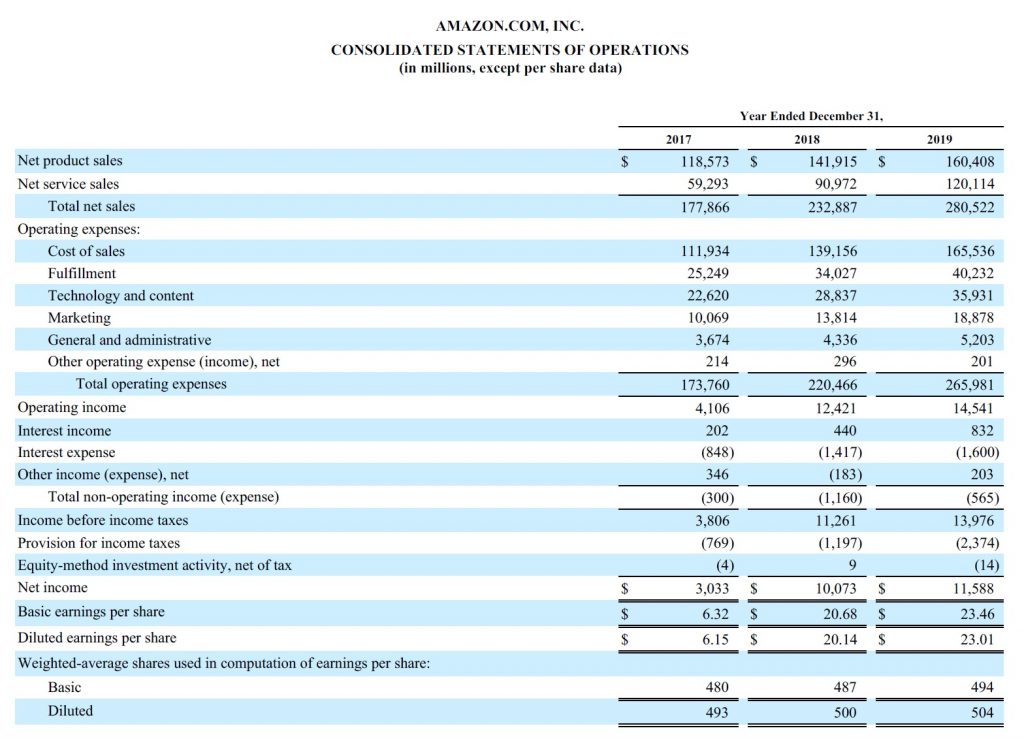 There’s lots of stuff in there we don’t care about, so let’s boil it down to the basics:

Some notes on this:

It claims a tax liability of $1.076 billion to the federal government; $162 million payable immediately, and $914 million deferred to future years. Another $284 million is in state income taxes, of which $8 million is deferred. And $1.014 is in foreign income taxes, including a deferred credit of $126 million.

So let’s take a moment to do some debunking here. The folks who claim that Amazon paid nothing in 2018 and/or got a $129 million rebate are cherry-picking that number out of the chart you see above: the number for its U.S. federal “current” liability. But this is accrual accounting, not cash flow accounting. Amazon accrued a total of $436 million in federal income tax liability in 2018. If we’re going to deduct the deferred portion from that, then we also need to add back in the deferred portions from 2017 and earlier that came due in 2018, because that’s what Amazon actually paid the IRS. Since Amazon’s tax returns are not public information we don’t know how much Amazon actually paid the IRS, but I can guarantee you that the IRS did not write a $129 million check to Amazon for 2018. Amazon does disclose in its 10-K that worldwide its combined cash income tax payments were $957 million in 2017, $1.2 billion in 2018, and $881 million in 2019.

Let’s break out the deferred taxes so we can understand where that’s coming from. It’s both assets (or tax credits) and liabilities.

There are a number of categories, including:

The bottom line here: there is nothing fishy going on. All the rules are set by GAAP, the SEC and the IRS, and Amazon’s auditor ensures that the company follows all of those rules.  Amazon’s discretion is in deciding how aggressively to use tax-advantaged approaches such as stock-based compensation, but at the end of the day the company will eventually pay all of the deferred taxes when the SEC and IRS say they must.

There’s one more thing for us to look at here: Amazon’s effective tax rate. Up to 2017, the statutory corporate tax rate was 35%; the Trump tax cut brought that down to 21% effective in 2018. Again, the company’s tax return is not public, so we don’t know exactly what its federal tax bill was (and it’s not independent of its foreign and state tax bills, since there are credits and penalties that cross those jurisdictions). Amazon does provide a breakout of the various impacts on its tax liability in its 10-K, starting from the fictional premise that it would have paid $2.935 billion in federal taxes if all of its income was domestic and taxed at a 21% rate.

Foreign earnings are an asset and liability: a liability for tax paid abroad and penalties for not repatriating earnings, but a U.S. credit for foreign taxes paid.   The company also benefited from about $450 million of unspecified tax credits. But its largest tax savings was for stock-based compensation: $850 million. In the end, Amazon’s effective income tax rate worldwide, including state tax, is 16.99%. I included in the comparison chart earlier the rates for other tech and retail companies. Amazon’s tax rate is higher than Microsoft and Google, lower than Facebook, and lower than the profitable retail corporations.

It’s important to note that Amazon pays taxes other than income, including property, employment, excise, and B&O taxes — as well as sales taxes on the products and services that it purchases for its internal use. While details for most of these taxes are not available, according to city reports in 2018 Amazon was by far the highest property tax payer in Seattle — about $28.4 million. 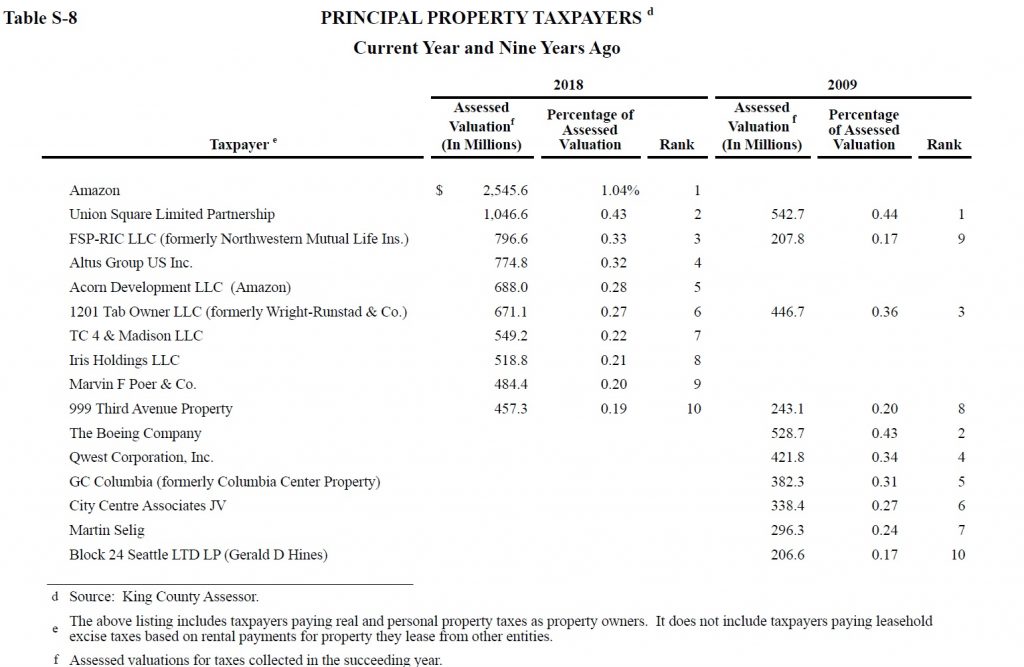 Amazon recently published an article on its “About Amazon” site list some other facts and figures about its 2019 taxes — though without underlying government filings, there is no way to verify their claims.

What did we learn today?