In the ongoing saga of the current state legislative session, last night was the deadline for bills to be passed out of their “house of origin.” One of the many bills that didn’t make it was HB 2907, the much-talked-about bill sponsored by Rep. Nicole Macri that would grant King County the authority to impose a payroll tax to pay for affordable housing and homeless services. For the last several days, Macri had been negotiating with a variety of stakeholders to find a compromise that could gather enough support to pass, and the clock ran out.

But today, Macri introduced a new version of her bill, HB 2948, that apparently will allow her to continue to move the process forward.

At a high level, much of the bill is the same as the old one: it grants payroll tax authority to the county, with the revenues to be used for affordable housing and homelessness services. It also has approximately the same exemptions: employees with salaries under $150,000, businesses that under state or federal law may not be taxed outside the existing regime (e.g. motor fuel and liquor), grocery workers,small businesses with less than 50 employees or revenues less than $3 million.

But the structure of the tax, and the numbers, are bit different. The tax is fixed at .25% of payroll (HB 2907 let the county set it anywhere between .1% and .2%). In addition, there is a new concept of a “participating city”: any city in King County with a population of at least 60,000 that opts in. A participating city will receive two-fifths of the county’s tax revenues collected within the city as a pass-through (so the city would get .1%, and the county would get .15%). There are nine cities that would qualify today based on their population:

In addition, the bill specifies how the funds must be distributed geographically. It says that for the purposes of allocating funds the county must be subdivided into three subregions, each with one of the three most populous cities in the county (Seattle, Bellevue and Kent). Seattle’s subregion will receive 45% of the funding, and each of the other two subregions will receive 27.5%. It also has allocations for specific services within the subregions.

The bill also requires that an advisory committee be set up to set goals and priorities, identify metrics to evaluate the effectiveness of allocations, and monitor use of the funds. 50% of the committee members must be representatives of the employers paying the tax, of which 1/2 “must include members who represent the highest ten percent of taxpayers.” It must also include members representing “persons of communities served by the tax, including representatives of people with lived experience and communities disproportionally impacted by homelessness and the affordable housing crisis;” plus one appointed by cities from each subregion and one appointed by state officials from each subregion.

The tax may be imposed for up to a ten-year term, and may be re-imposed for additional terms up to ten years — though if the revenues are pledged to bonds then they must continue as necessary.

One one-thousandth of one percent of the revenue collected from the tax by the county must be deposited in a state “payroll tax oversight account.” The funds will be used to pay for audits and technical oversight — but more importantly, this provision makes the bill “necessary to implement the state budget” and thus sidesteps the bill deadline that expired yesterday.

There is no explicit preemption for Seattle in the bill that would prevent the city from implementing its own payroll tax — though some clever lawyer might argue that there is an implicit one. However, since it sets up a path for Seattle to get a cut of the payroll tax revenues, it looks like an opening salvo for a round of negotiations where the county’s cap and the participating cities’ share are increased in return for adding a preemption clause. That is the moral equivalent of granting Seattle explicit authority for a payroll tax but placing a cap on it, while also providing certainty to businesses on the maximum payroll tax that can be imposed upon them. Also, granting the same opportunity for a revenue stream to eight other cities in King County is a clever way to build a larger consensus for the tax among cities who so far have balked at it.

Seattle’s City Budget Office has put out some revenue estimates for the county if HB 2948 were to pass. It estimates the county would bring in almost $152 million per year. No word yet on Seattle’s fraction of that 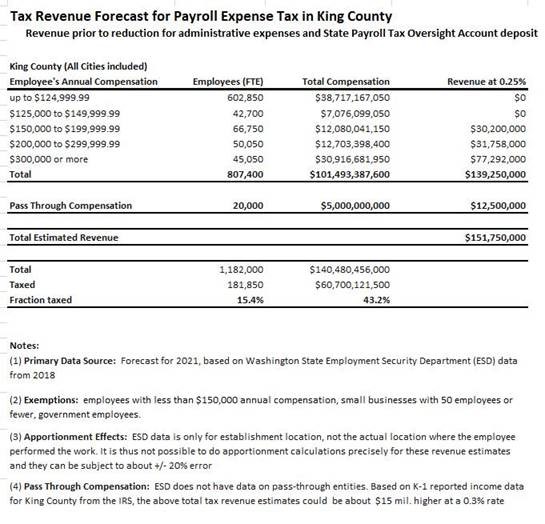 We can expect Council member Sawant and the “Tax Amazon” campaign to continue to oppose any attempt to add a preemption clause, or any kind of cap, on Seattle’s ability to impose a payroll tax. (UPDATE: her statement is below) Meanwhile, the Mayor’s Office put out a rosier press statement on the new bill:

I’m grateful to Representatives Macri and Springer for their continued work to urgently pass a bold, progressive business tax to help our most vulnerable communities across King County. Spending late nights and long weekends, our legislators have been working tirelessly to bring together so many elected leaders, businesses, labor leaders, advocates and cities to achieve our shared values. Seattle’s own Representative Macri truly represents what productive, progressive leadership looks like.

We know good-faith discussions will continue in the coming days, but even in a short session, I’m heartened that a progressive business tax continues to make its way through the Legislature. HB 2948 makes good on issues that Seattle has laid out as our priority from the start. It ensures Seattle has the flexibility to address our most pressing and urgent need: More housing, shelter and homelessness services, and resources to address public safety. There continues to be a strong and diverse coalition of supporters for this regional solution. The bill will continue to go through a robust and thorough process in both the House and Senate, and I believe more input will continue to make this bill better.

“While this bill, HB 2948, is completely inadequate for our needs, I welcome the possibility for King County big business taxes to fund housing and essential services. But let’s be clear: big business haven’t suddenly grown a conscience. What they want is ‘preemption’ – a ban on taxing Amazon and other major corporations. They see the Tax Amazon movement building momentum, and they are afraid,” Councilmember Sawant said, referring to business lobbyists who have publicly made it clear preemption is a top priority. A “preemption” amendment would limit or ban cities like Seattle from enacting their own progressive taxation on big business, in addition to any county revenues.

“In the context of a dire housing crisis, any ban on taxes that protects the wealthy such as Jeff Bezos would be absolutely shameful. It’s only because of the strength of our movement, with activists having gathered thousands of petition signatures and protesting in Olympia against the threat of a ban, that we have so far held off the corporate power grab. We need to build even stronger pressure, to ensure we don’t see a selling out of working people by State Legislators.

“It is unacceptable that politicians, some of whom identify as progressives, are even considering a ‘Protect Bezos’ ban on taxing big business in the state that is ranked dead last among all states, with the most regressive tax system. I urge activists to keep fighting, and I urge the Democrats in Olympia to stand up to the wealthy, reject any rotten, closed-door deals, and declare publicly that you will oppose any ban or limit on local taxation of big business,” Sawant said.