2018 was a brutal year for the Seattle Police Department’s HR department: 109 officers left the force, but only 68 were hired. This led last year to a task force focused on improving hiring and retention, which mid-year issued a report with twelve recommendations that the Mayor adopted. The Mayor and the Council funded much of those recommendations in the 2020 budget, and this morning Mayor Durkan called a press conference, along with Council member Lisa Herbold and SPD Chief Carmen Best, to reveal the final hiring and retention numbers for 2019, the results for January 2020, and a new recruiting campaign. 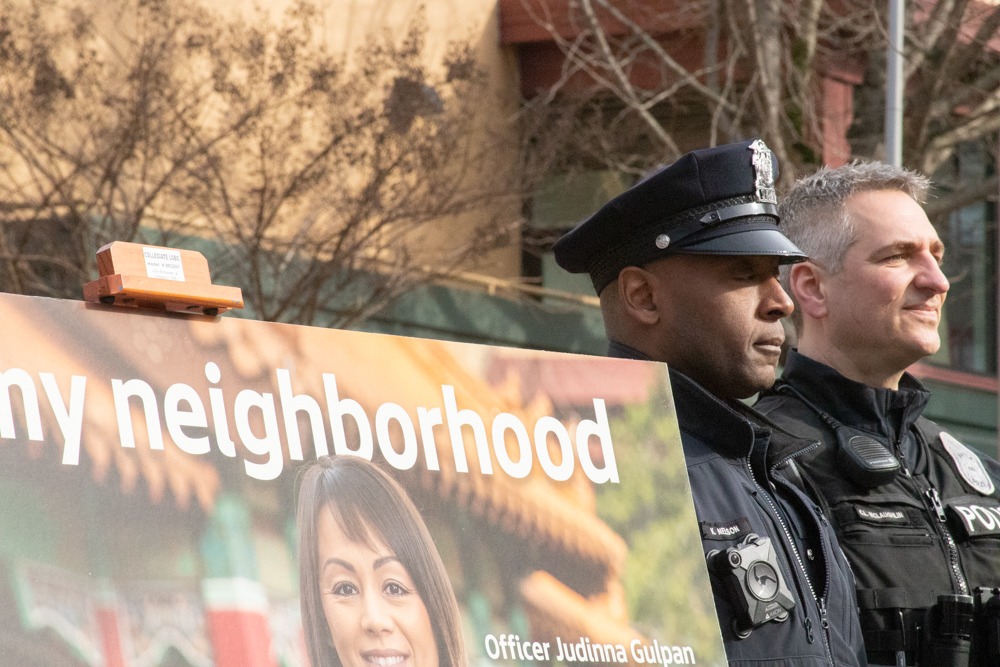 After a net loss of 41 officers in 2018, Mayor Durkan announced that things mildly turned around in 2019: 92 new recruits, 16 lateral hires (from other law enforcement agencies) and rehires, and 92 separations, for a net gain of 16 officers. That puts SPD’s current cadre of police officers at 1,371, still well below its budgeted level of 1,467.

At this morning’s press conference, held in Hing Hay Park in the Chinatown-International District, Durkan also said that 2020 was off to a good start: as of January 31, the department has hired 11 officers and has only seen 4 depart. SPD is predicting that by year-end it will have hired 104 officers and had 91 separations, putting it roughly on par with its 2019 results.

39% of the officers hired in 2019 were people of color — a new record for the department. Unfortunately, it is having more trouble recruiting women: only about 18% of its hires last year were female.

This morning, Durkan and SPD unveiled a new recruiting campaign, specifically aimed at attracting officer candidates from Seattle’s own communities. Called “This is my neighborhood,” it will feature 12 billboards across the city highlighting home-grown SPD officers. The first poster is up at 6th and Dearborn, and features Officer Judinna Gulpan.

Gulpan was present at the press conference this morning, and noted that she had worked in retail for ten years before becoming a police officer. “You don’t have to fit a mold to be a police officer,” she said.

According to the City of Seattle, the billboard recruiting program will cost $31,000. SPD Chief Carmen Best pitched SPD as a great place to work, regardless of your background. “This job is for everybody,” she said. She stressed the importance of letting the community see the diversity within the department. “We think it’s important to put a face to them.” Durkan also took her turn to support the recruiting effort, saying, “If you want to be a police officer, you want to be a Seattle police officer.”

Council member Herbold took the opportunity to reiterate the Council’s support for the police department, pointing out that the Council had voted to increase funding for SPD by nearly $110 million over the last four years and strongly supported a hiring bonus program as well as hiring more officers for the Community Service Officer program, which puts SPD personnel who are not sworn officers into communities to help build communication channels and trust and solve issues without bringing in armed police officers.

Herbold is the chair of the City Council’s Public Safety and Human Services Committee, which meets tomorrow morning to hear a presentation from SPD on its hiring and retention efforts. She and her colleagues have found themselves increasingly on the defensive, fighting a persistent perception for the past few years that the Council does not support SPD. That perception has mostly been fed by the words and actions of Council member Sawant, who has been a vocal critic of the police department, but it has spilled over to Herbold and the rest of her colleagues despite their best efforts to combat it. As such, the Council has been partly blamed for the high attrition and low recruiting in the department.

If you find SCC Insight’s reporting valuable, please take a moment to make a contribution. Thanks!