Yesterday afternoon’s Council committee hearing to review the most recent quarterly report for the Navigation Team was nothing short of a bloodbath. You can watch the video here, if you are so inclined, and read Erica Barnett’s summary. In a nutshell: the Human Services Department tried to put lipstick on a pig, obscuring the struggles that the Navigation Team faces. And the Council was having none of it. Prior to yesterday’s meeting, there were already some vocal critics of the Navigation Team, including Council members Sawant and Mosqueda, but the rest of the Council appeared to see the team as an essential investment even if they were skeptical about aspects of the program. However, in the face of a Navigation Team that is withholding information from the Council and papering over its problems, the already-shaky support for the team might collapse entirely in the coming days.

But the Navigation Team isn’t the problem: it’s a predictable outcome of a city government that continues to struggle to address the real problems. Let’s review those, and then take an honest look at what the city should do with a Navigation Team whose credibility has cratered and whose effectiveness is dubious at best.

Here are the problems that the city faces related to homelessness:

1. There isn’t enough affordable housing. A large portion of Seattle’s population is rent-burdened and living paycheck-to-paycheck because of the cost of housing, and it’s all too easy for one small event to lead to them losing their housing and finding themselves homeless. The city is building more housing overall — including permanently affordable housing — but it’s not enough.  Seattle’s population is still going up faster than we can build housing, which means the affordability problem will continue to get worse.

2. There isn’t enough shelter space that is a better alternative than living on the streets. The good news is that the city has a better idea of what works now: 24-hour “enhanced” shelters and “tiny home” villages that are safer, healthier, offer privacy and a secure place to store belongings, and come with case management and pipelines to other services to help people transition out of homelessness. The bad news is there isn’t nearly enough of it, and what exists is usually full: in the fourth quarter of 2019, there was an average of 7 beds available daily across the city’s enhanced shelters and “tiny home” villages. King County opened up a new 30-bed “bridge housing” shelter in November, which immediately filled up. The City of Seattle didn’t open any additional shelter capacity last quarter.

3. “Outreach” is nearly pointless when there isn’t a place to refer people to. The Navigation Team can’t make meaningful offers of shelter when there is no open space. The city’s contracted outreach providers also are hamstrung.

4. Some (not all) homeless encampments are creating safety, public health, and access issues across the city. Used hypodermic needles, human waste, and garbage collect, attract rats and other vermin, contaminate waterways and stormwater, and create risks to human health. Some encampments become focal points for drug and human trafficking. Sometimes individuals in crisis can create safety issues for the public. And encampments can block sidewalks, building entrances, and other public rights-of-way.  To be clear, I am not saying that all homeless encampments do some or all of these things; but some do, and where they do the city has a responsibility to the public to remove them.

5. The Navigation Team has suffered from “mission creep” as the city has struggled to address these problems. Here’s a slide from a February 2017 city presentation detailing the original goals of the Navigation Team as it was first stood up: 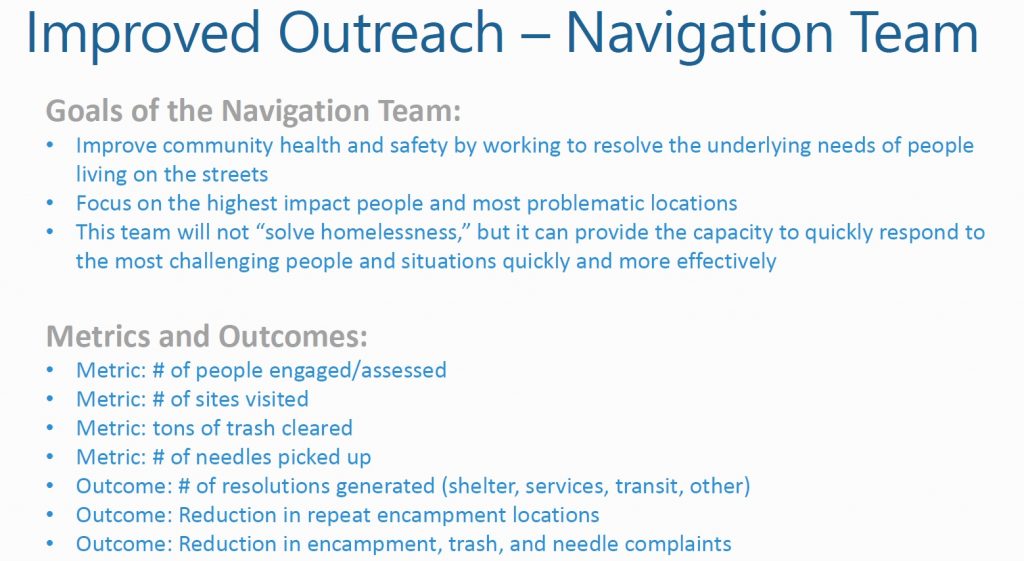 And here is the description of the Navigation Team from its most recent quarterly report:

“The Navigation Team is responsible for addressing impacts of encampments on City property while offering shelter and services to individuals encountered in the course of its work.”

The contrast is stark: the original focus was on helping homeless people, and now the focus is on addressing the impacts of encampments.  In fact, when the concept of the Navigation Team was first pitched to the Council in January 2017, it was even more clearly defined as an outreach team: 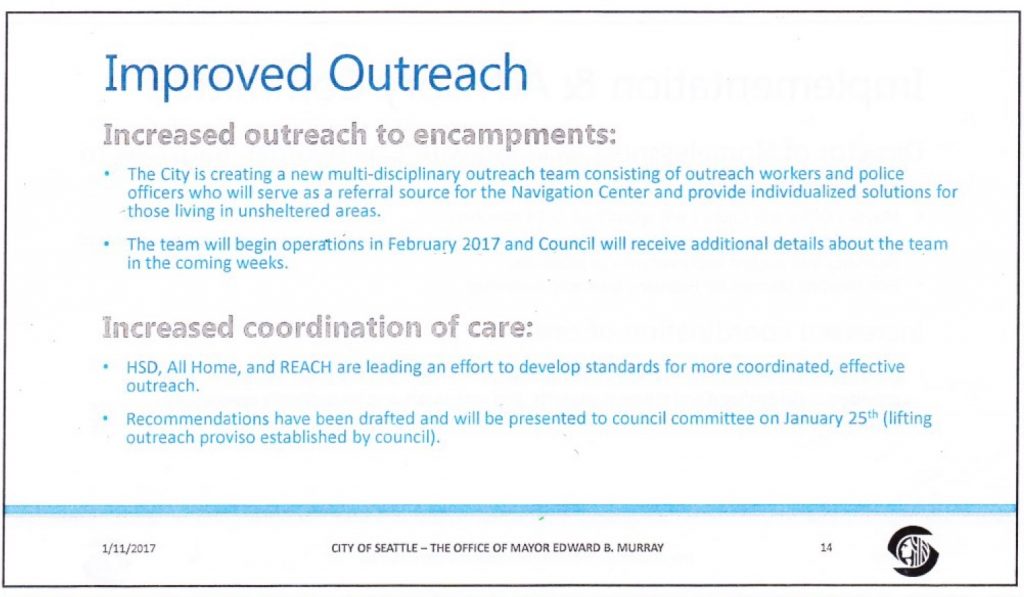 But today the Navigation Team has become the central coordinator for the city’s efforts to remove encampments. In part the City Council is to blame for this state of affairs: the Navigation Team began its life in the Department of Finance and Administrative Services, the natural place for coordination of efforts that span city departments such as encampment cleanups. But the Council insisted that the team be moved over wholesale to the Human Services Department. Their intention was to prioritize the team’s outreach work and ensure that it was well directed, but in doing so they ignored the uncomfortable truth that there is still a need for a group to remove and clean up problematic homeless encampments — and there always will be. They simply moved the group that was doing that work into a different part of the city bureaucracy, where it would be more difficult to act as a central coordinator. They could have split the team up along divisions of work; they could have looked at other approaches. They didn’t. Then the city found itself in the situation where its shelter space is constantly full, making the outreach work less fruitful — and what is left of the Navigation Team’s mission is wholly unsuited for the department that houses it.

Last June HSD admitted that it was shifting the Navigation Team’s focus away from 72-hour cleanups toward obstruction and hazard cleanups because the lack of available shelter space made it impossible for it to follow the rules for 72-hour cleanups by making meaningful offers of shelter. This has raised an ongoing question as to whether the team is stretching the definition of “obstruction” in order to be able to remove encampments that would otherwise require the 72-hour protocol. It still has not answered that question, and it has not been forthcoming with the information that would allow the Council to verify that the line is being drawn in an appropriate place — a task well within the oversight responsibilities of the Council. In the meantime, the number of “obstruction” cleanups by the Navigation Team skyrocketed in the last six months of 2019.

With that all said, here’s what the city should be doing:

1. Build more affordable housing, including permanent supportive housing. The solution to homelessness is homes. We don’t have enough. If Seattle is not building enough affordable housing to clear out the backlog of people who need it and address the continued growth of that population, then it isn’t solving the problem. We will just be filling up shelters endlessly, and those shelters and tiny home villages will become de facto permanent housing. This will require a lot of money, but it’s required spending because the problem will not solve itself if we simply ignore it long enough.

2. Build more enhanced shelters and “tiny home” villages, along with case management and other services (housing placement, substance abuse treatment, mental health treatment). Enhanced shelters and tiny home villages have become a critical element in moving people from homelessness into permanent housing. If we don’t have enough capacity for everyone currently living on the streets, we aren’t doing enough. This will also be expensive, but it’s necessary to make all the rest of the investments work.

3. Focus the Navigation Team, under a new name, on cleaning up occupied obstruction and hazard encampments and abandoned encampments elsewhere.There will always be a need for a certain amount of encampment removal, and the city should admit that and focus on doing it the right way. The team should still have “system navigators” to offer services onsite when cleanups happen, but the city should simply admit that outreach is not the focus of its work. The group should be moved back into the FAS department, and it should be tightly regulated and supervised to ensure that the occupied encampments it is removing are the ones that truly need to be removed to preserve public safety, health, and access.

4. The City Council should request that the City Auditor audit the Navigation Team’s interpretation of “obstructions” in its decision-making around encampment removal,  and provide recommendations on tightening the rules moving forward.

5. The city should focus its contracted outreach teams on getting people into shelters and other programs by reserving available enhanced shelter and tiny home villages spaces to be used by those teams to make referrals, as it does with the Navigation Team today. Outreach contractors should also be required to provide immediate transportation to a shelter for anyone who accepts an offer of shelter.

6. The city should build a better dashboard, that better reflects whether the city is making progress on solving the problem rather than the nuts-and-bolts. It should include:

This is not the only information needed, and certainly detailed reports will be required for many pieces. But right now we keep losing sight of the big picture of homelessness and whether the city is making progress, and we need to see the pipeline of housing, shelter, and people.

7. It’s time for Jason Johnson to go. After his confirmation as permanent HSD Director was withdrawn due to opposition from some community leaders and HSD employees, Mayor Durkan appointed him as interim Director to keep the trains running while the proposal for a regional homeless authority worked its way through. But the failed confirmation process weakened his authority, and his continued stumbles in explaining and defending the Navigation Team have undermined his credibility with the Council. He is simply not effective as a leader for his department anymore. Johnson has been a dedicated public servant and we can be assured that he cares deeply about the mission of HSD and about helping the clients of his department’s program. He deserves our thanks for taking on a truly thankless job, and it’s easy to argue that he too has been set up to fail. But especially after yesterday’s hearing, there is no path forward for him anymore, and Durkan should ask for his resignation.

If you find SCC Insight’s reporting valuable, please take a moment to make a contribution to support ongoing work. Thanks!