Earlier this week, SDOT made an emergency announcement that it was closing the high West Seattle Bridge due to an increase in cracking of the concrete in the bridge that, in their estimation, made the bridge unsafe to carry vehicles. They are now working on a deeper analysis and a repair plan.

Let’s take a deeper dive into what has happened to the bridge.

To fully understand what transpired, we need to know something about how the West Seattle Bridge was built, and why it was built that way. There are actually two bridges over the mouth of the Duwamish River: a low, “swing” bridge, and the high bridge that was closed this week. But prior to 1978, there were two low drawbridges (or “bascule” bridges) at the location. In 1978 a freighter rammed one of the bridges and rendered it unusable, and with steadily increasing vehicle traffic between West Seattle and downtown, the city opted to replace it with a much higher bridge that boat traffic could fit underneath unimpeded. That new bridge opened up in 1984, and is now the primary arterial to West Seattle from I-5 and downtown.

The bridge is 1,340 feet long in three spans, with the center, main span over the river measuring 590 feet long and 140 feet high at its apex.

Of course, the trick with building bridges is supporting the weight of the over-water span. The method chosen for the West Seattle Bridge is called a “box girder,” the same method being used for the elevated portions of the Sound Transit light rail track and for many other overpasses. It’s a fairly common bridge design nowadays.

In a box-girder bridge, the spans of the bridge are long, hollow concrete boxes (or tubes, if you will). Inside the four walls of the box are long steel cables, acting as tendons to hold the box together; they provide the main strength of the bridge itself, while the concrete distributes the weight load to all of the tendons and provides a platform for the roadway to sit on top of. This use of steel tendons is called “post-tensioning” — the spans are built in segments, and as each segment is attached the tendons are tightened so that they carry the weight and reduce the flexibility of the bridge within an acceptable tolerance (there will always be a little bit of movement of the bridge, due to wind, weight and thermal expansion and contraction).

If you’ve watched how the light rail spans are constructed, you’ve seen that they pre-cast the box girder segments off-site, truck them in, then lift them up into position and attach them. But the West Seattle Bridge was built with a different method, one commonly used over deep ravines or for tall bridges over water where it’s impractical to transport and haul up large prefabricated segments. In that method, first the bridge columns are built at either end of the span, and then the first piece of the box is built on top of each column (called a “pier table”). The bridge is built segment-by-segment, working out from both sides of the pier table at the same rate to keep everything balanced. On each end there is a “form traveler,” a moving cast structure that is extended out beyond the most-recently-built section.

The steel is laid in place in a lattice shape, and then the concrete is poured into the form traveler to form the new segment. Once a new piece is complete on both sides of the pier, the form traveler is moved out to where the next segment should be (for the West Seattle Bridge,16.5 feet) and the process is repeated. The process looks increasingly precarious as the span is built and it cantilevers further and further out over open air with no visible supports either above or below. In the case of the West Seattle Bridge, two form travelers were used side-by-side to build parallel box-girders running the length of the bridge.

When the two cantilevered sections of the main span of the West Seattle Bridge were nearly complete and had almost met in the middle, the form travelers were removed and one last pour was done to plug the final hole with a “keystone” of sorts and finish the span.

Keep in mind: all the weight of that bridge span is supported by post-tensioned steel cables, inside the concrete, tied back to the piers on either side. If you’ve ever played with a push-button string puppet, then you understand the basic physics of a box-girder bridge: tendons can hold the whole thing taut.

But the weight dynamics are challenging for this kind of design. Now think back to your high school physics class when you learned about fulcrums and levers — or think about playing on a see-saw. The farther you are away from the fulcrum, the less force you need to create motion. Or put another way: a small weight held far away from the fulcrum puts much more pressure on the system than it does when close to the fulcrum.  And in the case of the West Seattle Bridge, the fulcrums are the piers. So when you get to the middle of the main span, the downward forces are adding a tremendous amount of stress on the steel tendons and the piers.

On top of this, the bridge is now 35 years old — about half of its expected life — and things have happened over its lifetime. Bridges, like all other structures, settle. It’s close to a major earthquake fault, so there’s probably also been some earth movement. There’s the wind pressures, the rain and snow, the thermal expansion and contraction over the seasons. The steel tendons will stretch a bit over time too. There’s also been an increase in traffic: it was originally designed to be a 6-lane bridge, but was expanded to seven lanes and often has stop-and-go traffic during rush hour. That means an increase of weight on the bridge as well

All those forces — and certainly the combination of them — leads to cracks in the concrete. The fact that there is cracked concrete in parts of the West Seattle Bridge is not surprising, and in fact was expected, just as it is with all the other concrete structures in the Seattle area (including the floating bridges, which are strings of concrete pontoons). That some cracking happened is not in itself a concern, but it becomes worrisome in two situations:

The ability of the concrete to efficiently distribute the load is a feedback loop; as it cracks, it puts more stress on other parts of the concrete, which makes them more likely to crack. Since bridges are generally over-engineered small cracks usually don’t add enough stress on their own to cause further cracking, but combined with the external forces that created the crack in the first place at some point they lead to progressively larger cracks. Then the stresses start accumulating on the part of the concrete that is still intact as the load shifts, and the process accelerates.

According to SDOT, up until 2013 the West Seattle Bridge was being checked for cracks less than annually. But that year SDOT observed some initial cracking — not enough to cause alarm, but enough to cause it to start annual evaluations. In the ensuing years through mid-2019, they saw low levels of growth of the cracks, and responded by filling them with epoxy to ensure that they weren’t exposing the steel tendons to moisture that might lead to corrosion. But last August, the inspection discovered moderate crack growth, raising enough concern to cause SDOT to increase the inspection frequency to monthly. In October, November and December, they saw even more cracking beyond the August observations, and SDOT began evaluating options to mitigate it. By February 2020, the continued cracking had progressed enough that SDOT’s engineering consultant recommended reducing the traffic load on the bridge, and SDOT began preparing for discussions with city leaders and the community on options.

On March 19, the engineering consultant notified SDOT of new analysis that raised larger concerns, including that the bridge might need to be entirely closed. And then on the morning of March 23, engineers discovered new cracks and confirmed that the growth was accelerating exponentially. By late morning Mayor Durkan had approved the plan to close the bridge, and at 7pm it was closed — both for safety’s sake and to reduce the weight load on the bridge to decelerate the cracking (hopefully). 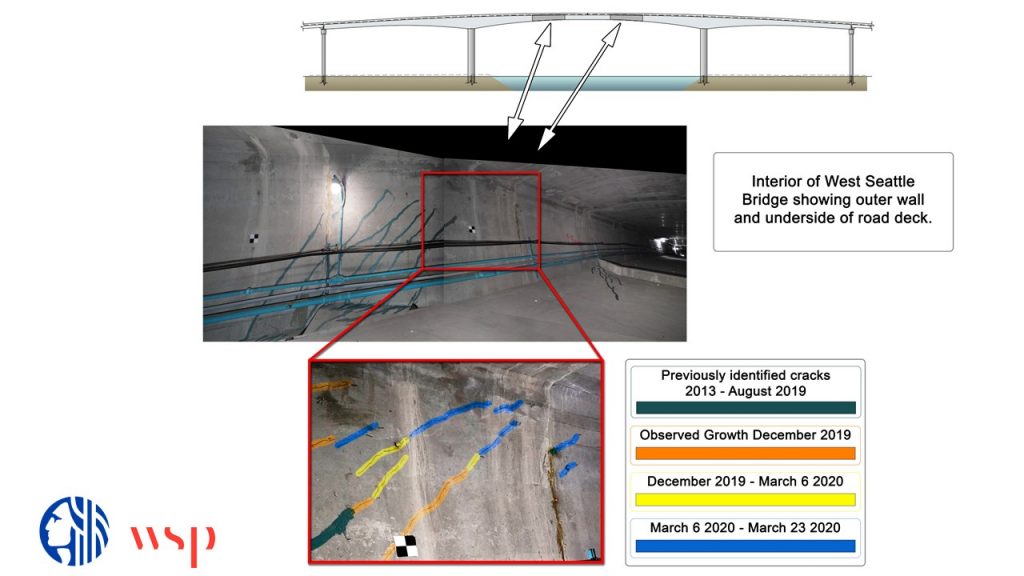 But what is equally informative is looking at where the cracks happened: on either side of the keystone plug, at the most cantilevered parts of the bridge span, farthest away from the piers — where small forces can create the most motion (see the diagram above). It’s also the place where the vertical thickness of the bridge is near its minimum: the box girders are 30 feet tall at the piers, but only 12 feet tall at mid-span. That also means that the amount of steel inside the box girders are near their minimum.  As you can clearly see in this photo by the Seattle Times, the cracks are along the sides and bottom of the box girders, and are very symmetrical — on both sides of the keystone, and fairly equal on both box girders. That all strongly suggests that it is indeed a load issue: too much weight on the weakest parts of the bridge.

The good news is that it can be fixed through a variety of methods. However, SDOT’s first job is to ensure that the situation doesn’t get any worse for the bridge structure, “shoring up” those segments if necessary — not an easy task for the highest part of the bridge, which sits directly above the river. SDOT’s second job is to fully diagnose the issue: identify the causes of the cracking if possible, determine if there is any corrosion in the steel tendons, and recheck the load calculations to understand how much weight that section of the bridge is expected to carry.  Then they will have a much better idea of how to fix it, and can evaluate their options. One option will be to wrap the outside of that part of the bridge with steel: it’s ugly, but very effective — though it will add even more weight, and more stress on the rest of the cantilevered span. However, if there is corrosion in the steel tendons, then the repairs might need to be far more invasive.

Until SDOT has time to do a thorough evaluation, it is difficult to estimate the timeline for reopening the bridge, even partially. It’s also impossible to know how much it will cost, at a time when the COVID-19 outbreak is already causing financial pain for the city. So expect that we will learn more in the coming weeks. In the meantime, SDOT is scheduled to brief the City Council on Monday morning.