When the City Council passed its sweetened-beverage tax in 2017, it commissioned an ongoing study on the impact of that tax in reducing consumption of sugared beverages. Two months ago I reported that the UW team that landed the contract to do the study had yet to deliver a report on 2018 data. But today, the City auditor finally released that report. Its main finding: the soda tax had no effect on the amount of sweetened beverages consumed by low-income children and their parents.

There are two components to the study results released today. The first is a study of “pass-through”: how much of the sweetened-beverage tax (SBT) is passed on to consumers. The tax is actually imposed on wholesale distributors, not end-consumers, so the extent to which it is passed down the line to consumers is important to understand, so that we can tell to what extent it might be a factor in changing consumption patterns.

The research team compared end-of-2018 consumer prices for a variety of beverages (taxed and untaxed) at a variety of retail locations in Seattle and in a comparison area (Federal Way, Kent and Auburn) where the tax is not imposed but the economic situation is similar for the subset of the community being studied (low-income families). Having a comparison area helps control for a wide variety of factors such as regional education levels, cultural/community focus, and media attention to health issues. Keeping in mind that the Seattle tax is 1.75 cents per ounce for sweetened beverages, the change in prices in the comparison area gives us a baseline for inflationary effects on prices. Any increase above that could potentially be attributed to “pass through” of the SBT to consumers: if it is 1.75, then 100% of the tax is being passed through; if it’s less, then the distributor and/or retailer are paying some of the cost themselves rather than impose the full price increase on their customers. Of course, policy makers ideally would like to see a 100% pass-through rate.

The team found that the average price increase attributed to the SBT was 1.55 cents, representing an 89% pass through rate. There was variation by type of beverage (soda was lowest at 82%, while bottled tea was highest at 115%), and by type of store (small stores at 82%, warehouses at 119%).

The team also looked specifically at Seattle stores within one mile of the city line, to understand if those businesses most threatened by “cross-border” shopping were eating more of the tax themselves. And indeed they found that the pass-through rate at those stores was lower, at 64%.

The research team also compared the end-of-2018 prices with the previous data they had collected and published from mid-year 2018. Largely they found that stores had adjusted their prices in the second half of the year to pass through more of the tax, with a few notable exceptions: soda prices were cut substantially, and small stores lowered their prices. 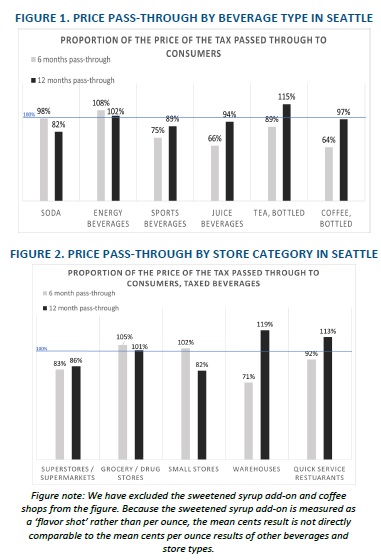 It’s worth noting that the research team also found that the prices of non-taxed beverages increased in Seattle more than they did in the comparison area: .30 cents per ounce for diet soda, and 1.12 cents for unsweetened tea. Nevertheless, they found a substantial amount of pass-through for the SBT, which gives us reason to look to see whether it made a difference in consumption.

Unfortunately, the research team did not undertake a study of the Seattle population as a whole, but instead focused just on low-income families. This makes a certain amount of sense, since soda and other sugary beverages are targeted at low-income communities through marketing campaigns. But at the same time, it doesn’t allow us to see the larger picture, or to square the consumption numbers with other studies of retail purchases such as this recent one. 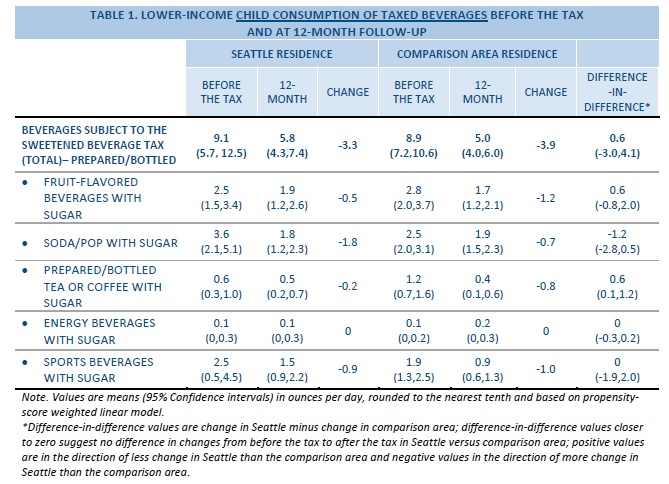 There were also reductions in the percentage of Seattle kids who were “high consumers” of the taxed beverages, measured both by frequency of consumption and by volume consumed — but again, the kids in the comparison group saw even greater reductions. 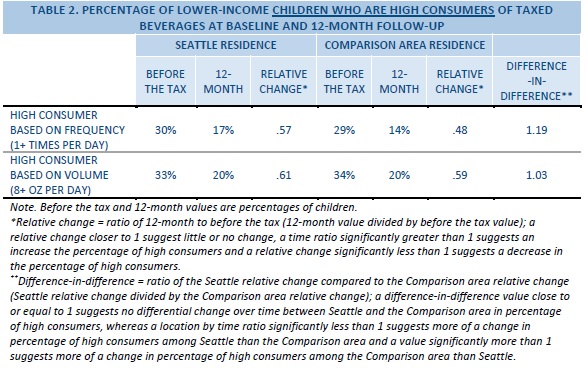 In studies like this, there is always the question of “substitution” — when people stop consuming one bad thing, do they substitute a different bad thing?  In this case, did kids’ consumption of sugared foods increase? The study team found that the Seattle children’s consumption of other sugared foods stayed about flat, but the consumption in the comparison group went down. 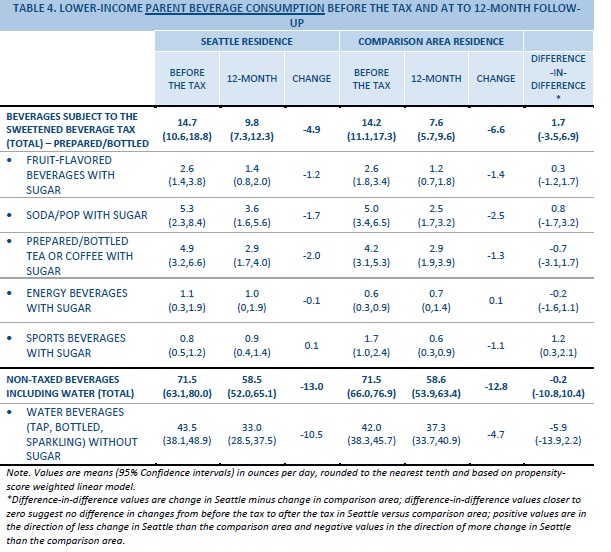 The percentage of Seattle parents who were high-consumers also decreased, but again not as much as the comparison group parents. 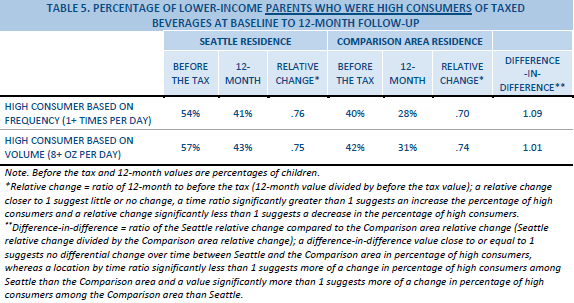 The inescapable conclusion from the data is that while there was a decrease in consumption of sugared beverages by the low-income Seattle children and parents in the study, none of it can be attributed to the sweetened beverage tax. In almost every single measurement, the comparison group not subject to the SBT saw bigger decreases in consumption.

There are limits to the study, including that the study participants knew they were being studied and could have felt pressure to report lower consumption than in reality (which is called “social desirability bias”). Also, the sample size is small: 127 in Seattle and 188 in the comparison area; because of that the variance is high, resulting in large confidence intervals for individual statistics that render many of the differences between the Seattle group and the comparison group of low statistical significance. Finally, it’s a short period of time — just the first year — and it will be interesting to learn what happened in 2019. Did the decreases continue? Or did any initial effect wear off and people reverted back to pre-tax behavior? The study team promises that they will deliver a year-two report later this year.

It’s also worth asking why the comparison group saw a decline as well. There are many possible explanations, including overall health trends in the media; and region-wide media attention to the SBT as it was being debated, passed and implemented. Or perhaps the marketing campaigns funded by SBT revenues had a spillover effect to the larger region; this is unlikely, though, since the programs have largely been under-funded, and research has shown that those kinds of campaigns tend to have little impact.

But the biggest question is for policy-makers: what to do about a highly regressive tax that is now clearly failing to deliver on its intended outcome. The City Council and Mayor are up in arms right now about the regressive nature of Seattle’s and Washington’s tax system, with a payroll tax working its way through the legislative process and rumblings from city officials about wanting to take another shot at a progressive income tax. And yet here is one of the most regressive taxes, self-imposed by Seattle elected officials, failing to deliver on its promise. Unfortunately there is little chance that it would be repealed, because the same city officials have become attached to the revenues — and fights have ensued between the Mayor and Council over how to spend the $20 million or so per year that it brings in. As recently as two weeks ago, city officials changed the rules on the SBT so that revenues could be used for emergency COVID-19 relief food programs; a good use indeed, but proof that it will be difficult, if not impossible, to ever repeal the SBT.

Here’s the spin we can expect to hear from officials in response to today’s report:

The only winner today is Council member Herbold, who is vindicated in her sole “no” vote on the tax when it was imposed in 2017, and who at the time referred to it as “punitive.”