This afternoon, the Seattle Department of Transportation gave an update on its efforts to preserve and repair the cracked West Seattle Bridge. There was plenty of bad news, and not much good news.

After three weeks of working the problem, SDOT now has divided up the work into three phases:

Phase 1:  fix the Pier 18 lateral bearing. See my earlier post for a longer description of a “bridge bearing,” but in short: it’s a shock absorber of sorts so that the bridge span has flexibility and jolts don’t send shock waves throughout the structure. One of the lateral (i.e. sideways) bearings on the eastern end of the high span is “locked,” meaning that it is no longer flexing as it should, and SDOT suspects that it is exacerbating the cracking issues in the center spans (though not solely responsible for the cracking). So job #1 is to fix that. Design work is underway, according to SDOT, and a contractor is being procured to perform emergency repairs. 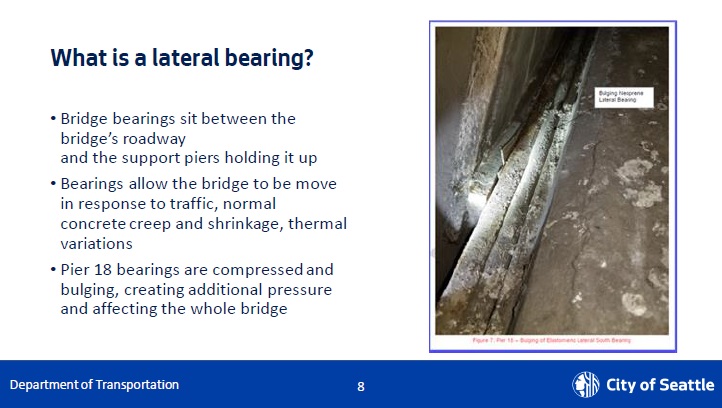 Phase 2: shore up the cracking spans. This will add temporary support structures externally and possibly internally as well to prevent further deterioration and allow repair crews to safely access the bridge. SDOT believes it will likely need to obtain, fabricate and build customized materials and equipment to shore up the bridge, a process that will take several months; then the shoring itself will take months more. 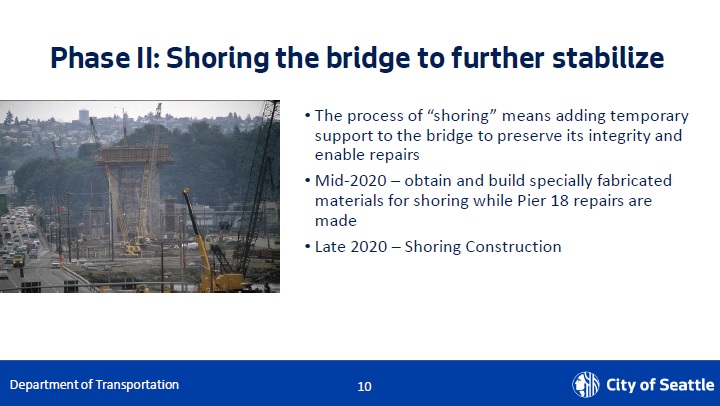 Phase 3: repair of the bridge. The design and planning of potential repairs will take place concurrently with the shoring work, but as of right now few details are known because SDOT needs to collect and analyze more information in order to make key decisions.

SDOT released their early, rough estimates of schedule and budget for the Pier 18 repairs and the shoring work — but not the bridge repair itself. The Pier 18 work will begin immediately and conclude in the summer. Shoring design begins immediately; procurement will happen over the summer and into the fall; shoring construction begins in the late fall and should wrap up in spring of 2021. 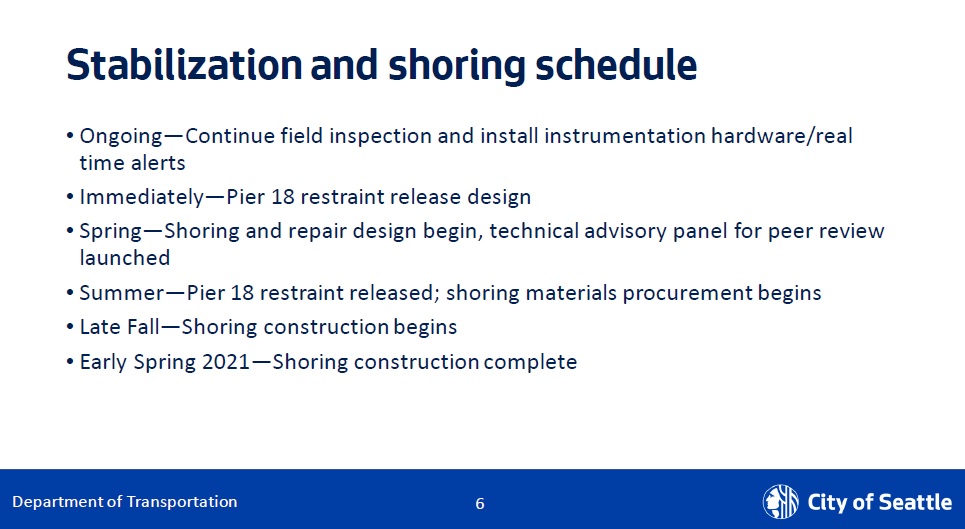 The total budget through shoring is roughly estimated at around $33 million, including $5 million for planned maintenance of the lower swing bridge that has been bumped up in priority given the critical need for the bridge now: 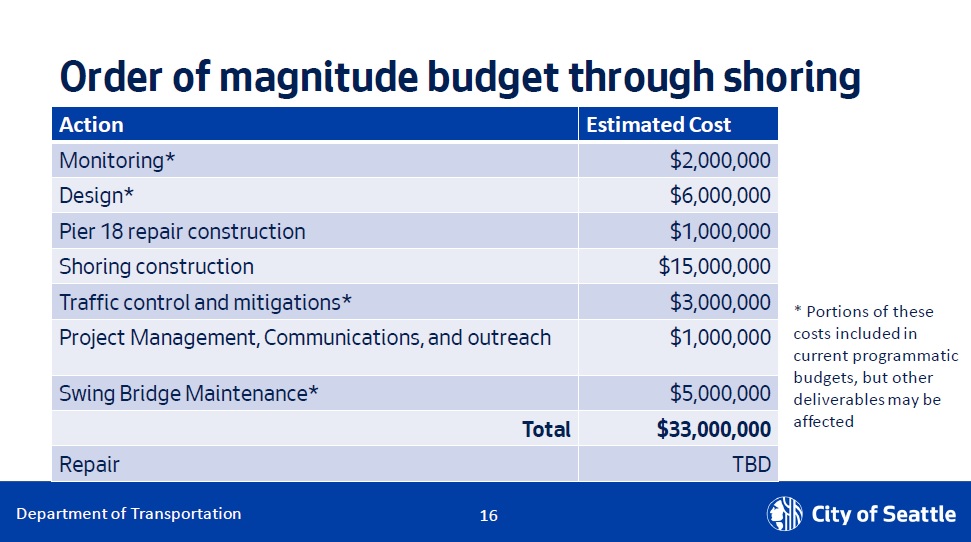 According to SDOT, part of the funding for the immediate response has been redirected from other SDOT projects, but most of the shoring work is unfunded and money will need to be found from other sources.

That’s the first bit of bad news: just getting through the shoring phase is likely to take the next year.  The next bit of news is no better: at this point SDOT isn’t even sure that the West Seattle Bridge can be repaired — and even if it can, based upon the outcomes of similar repair projects on other bridges, it estimates that it will only add about 10 years to the lifetime of the bridge and it will need to be replaced sooner than anticipated. SDOT Director Sam Zimbabwe said that the bridge, built in the early 1980’s, cost about $400 million adjusted for inflation to today’s dollars. Mayor Durkan said this afternoon that she is speaking with the city’s Congressional legislation about opportunities for federal funding for the bridge; both she and Zimbabwe suggested that the federal government is interested in funding infrastructure projects as part of the COVID-19 economic recovery package, and so the city will try to be well-positioned to use that as an avenue for funding for this project. 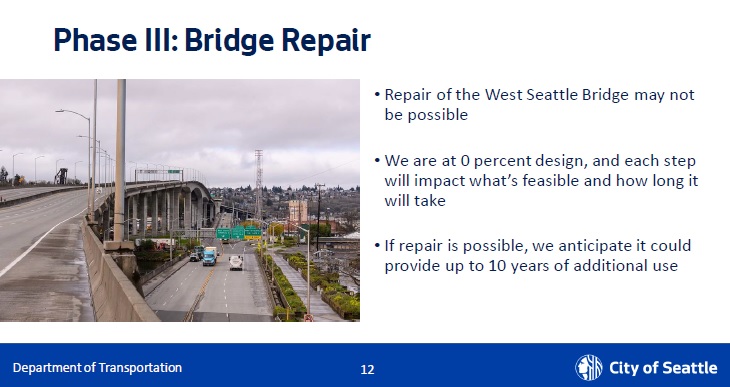 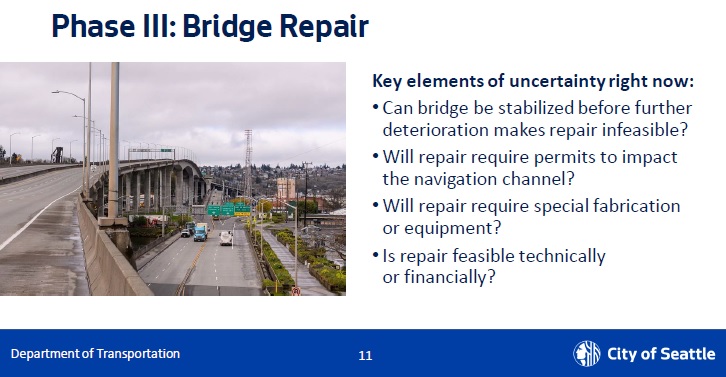 It may also turn out that repairing the bridge is prohibitively expensive, or that the return on investment is simply too low, and replacing it is a better option — though that will significantly extend the time it takes to get traffic flowing to and from West Seattle. As it is, SDOT is now saying that it doesn’t expect to allow vehicle traffic across the bridge through the end of 2021, and possibly longer depending on how long repairs take — more bad news. 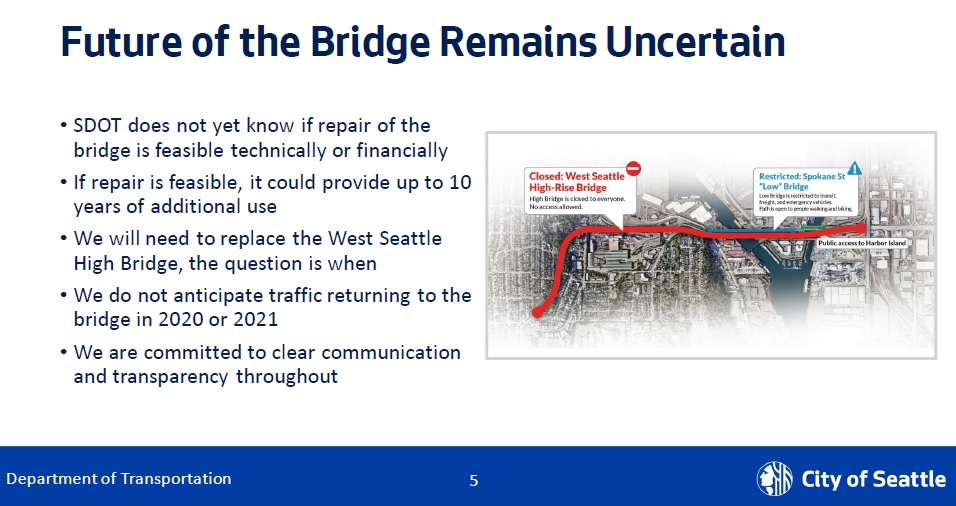 Credit goes to SDOT for being honest about the situation. Zimbabwe, a West Seattle resident himself, said that his department is committed to providing information early and often as the effort moves forward.  In the meantime, the department is inspecting the bridge daily and while it does not believe that there is imminent danger of bridge failure, they have analyzed failure scenarios (he says there are multiple), and they have response plans just in case they need to respond quickly. 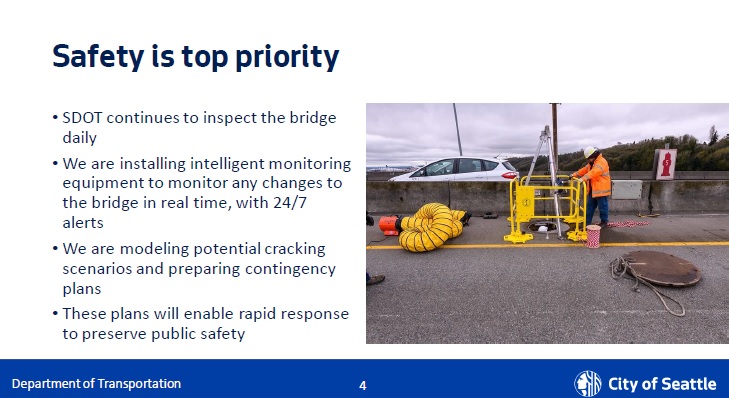 In a press conference this afternoon, Mayor Durkan said, “I will not allow any car to go over the bridge until it is safe,” but added, “We know the impact this has on everybody who lives in West Seattle” and committed to doing everything the city can to support West Seattle residents and businesses. Council member Lisa Herbold, who represents West Seattle, noted that the impacts of the “Seattle Squeeze” lasted for eight months, and this will be longer; she particularly emphasized the need to address the needs of businesses in West Seattle during the bridge closure. “The impacts of this closure are huge; they cannot be overestimated.”