This afternoon Mayor Durkan and City Budget Director Ben Noble briefed the press on the city’s new projections for how the COVID-19 shutdown is affecting city revenues. This comes on the eve of a presentation to the City Council tomorrow morning on the same information as the Council begins considering a new $500 million payroll tax.

Under their most likely scenario, revenues will fall around $210 million below budget. But in a more pessimistic outcome, the shortfall could increase to almost $300 million.

Let’s dive into the details.

As a preface, it’s important to point out that the city is using national state and regional economic forecasts to model what happens over the next 2-3 years. Those forecasts are coming from reputable sources, but we are in largely uncharted territory so there is room for skepticism in any forecast. Also, the city has essentially no revenue data since the beginning of the shutdown, because it happened so recently (even if it doesn’t feel that way) and because some tax payment deadlines such as property taxes have been pushed out. In the coming weeks and months when there is real data to look at, the models will undoubtedly tighten up.

The city has modeled three scenarios: a pessimistic one, an optimistic one, and a middle-ground “baseline” one. According to Noble, the current unemployment numbers have already overrun the optimistic model, so he is no longer considering that viable. Based on national economic forecasts, both remaining scenarios predict a short but deep recession, though they vary on the depth of the trough and whether the recovery that follows is rapid or slow.

Here are the assumptions for the two scenarios for the Seattle metropolitan area, in terms of job loss and income per capita: 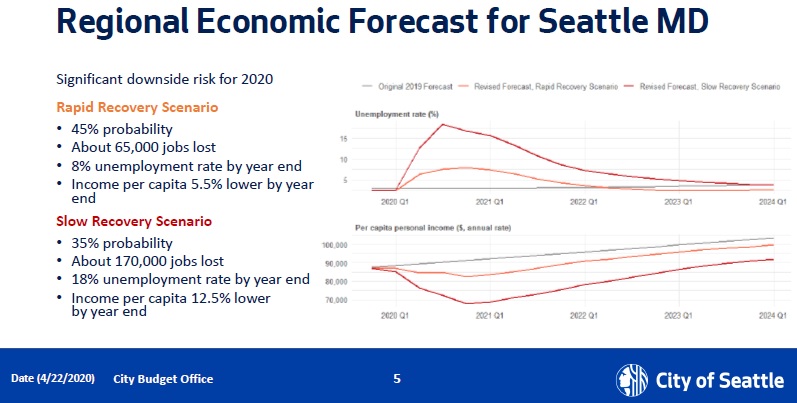 Under the rapid recovery scenario, the 2020 budget revenue deficit is about $210 million; under the slow recovery scenario, it’s $299 million. Under both scenarios, it takes until 2022 for general fund revenues to climb back up to last year’s levels. This isn’t a one-time blip; it’s going to affect city revenues for multiple years. 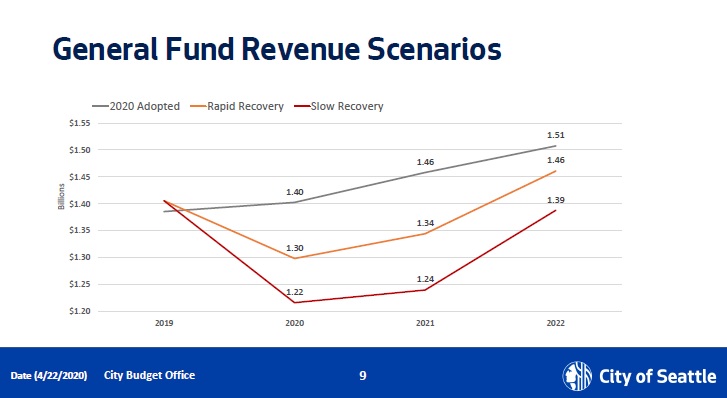 If you are a regular reader of SCC Insight, then you know that every September I do a deep dive on the proposed budget, including where all the revenues come from. As you will recall, I point out every year that a large percentage of the city’s “general fund” revenues come from four sources:  sales taxes, property taxes, B&O taxes, and utility taxes.

Because of that, the city’s total revenues are highly vulnerable to changes in those four sources; even small swings can translate into large dollar amounts. And that is exactly what has happened during the COVID-19 shutdown: two of the four big sources, sales taxes and B&O taxes, are getting hammered. Sales tax revenues are in trouble for the obvious reason: stores are closed, and everyone is staying home. This afternoon, Noble shared the sector breakdown of sales taxes from last year, in which you can see the heavy exposure to retail, the hospitality and tourism industries, and construction (we’ve discussed before the extent to which the city’s revenues have become increasingly dependent on the construction boom). 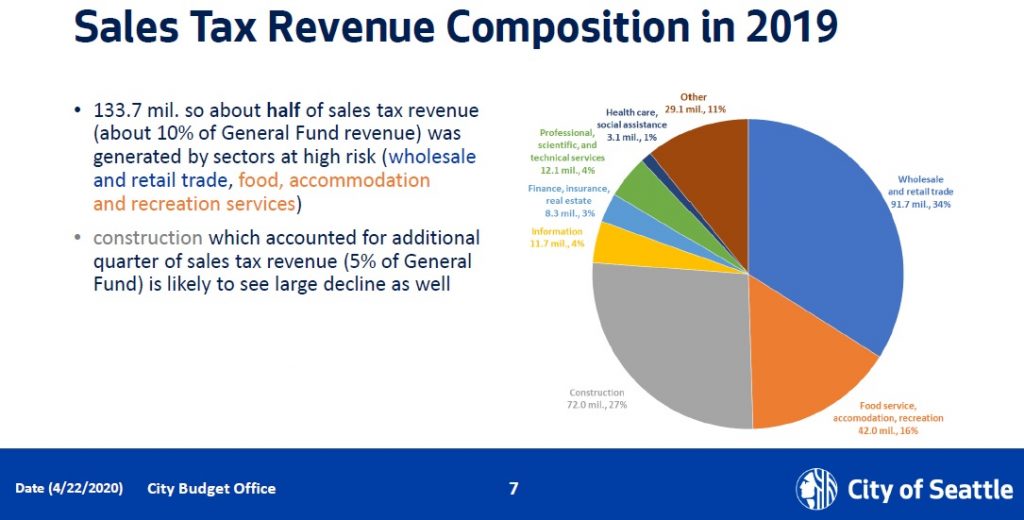 B&O taxes are cratering for the same reason: businesses are closed. The sector exposure there is much more evenly distributed, but unfortunately almost all of them are being equally hammered by the shutdown. 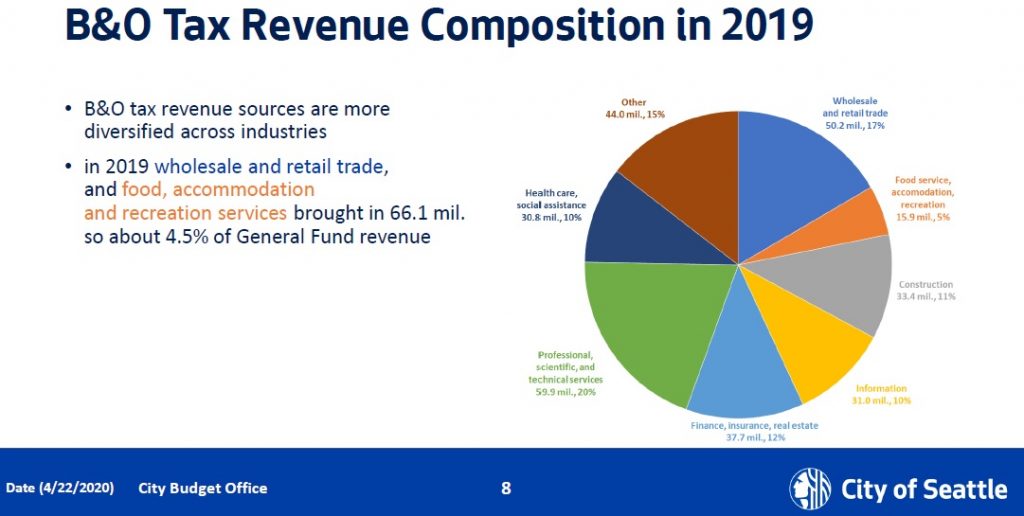 The projections for utility taxes and property taxes are not nearly as dire, and in fact property taxes so far are projected to be flat (and still slightly above last year). That’s largely because of the strange way that property taxes are calculated: the government sets a total amount to be raised, and then assesses it proportionately based upon property values. The only potential weakness in property tax revenues is from owners who default on payments, and the city looks are default rates from prior recessions to estimate those levels.

Let’s look at a breakdown of the projected revenue shortfall under the worst-case, “slow recovery” model: 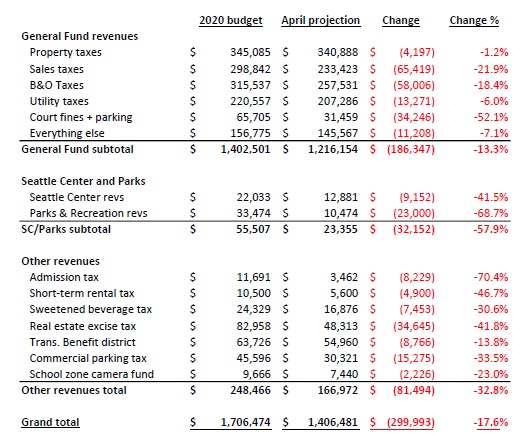 Every line-item is in the red, which obviously is very bad, but you can see that there are a handful that make up the bulk of the deficit. Let’s chart it so we can visualize the changes better: 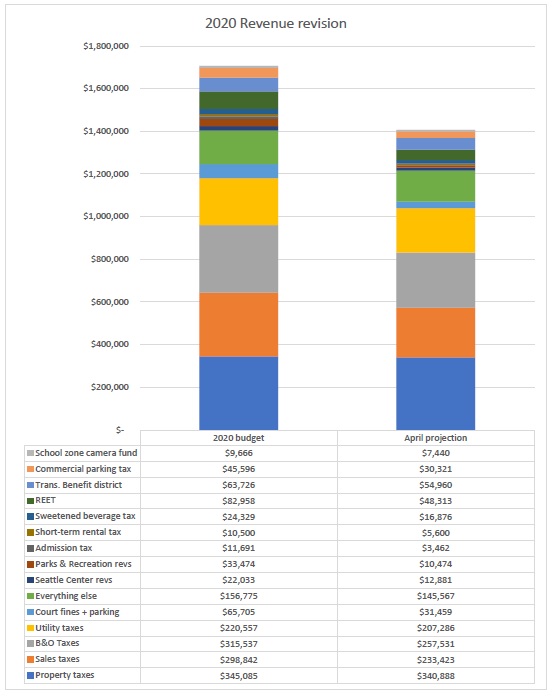 Everything got smaller, but you can really see the big difference that sales and B&O taxes make in the total. I mentioned earlier the four taxes that make up the lion’s share of the city’s revenues; interestingly enough, with the new projections, those four now make up an even larger share — and property taxes alone are nearly one quarter: 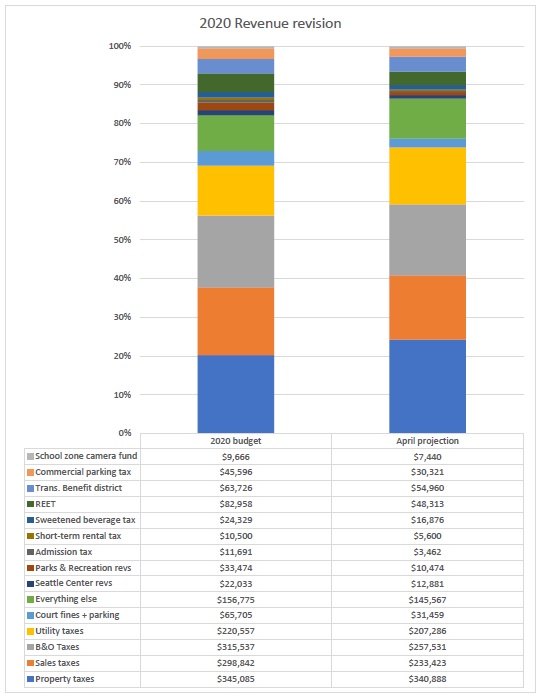 Parking meter revenues and commercial parking taxes are essentially nonexistent at the moment, and together represent nearly $40 million of revenue shortfall. Real estate excise tax is also expected to be off; REET is highly variable from year to year because a single large commercial real estate transaction can represent millions of dollars in REET; for that reason, the city resists using REET to fund long-term commitments, and instead prefers to use it for one-off capital projects (it also has some severe restrictions under state law in what it can be used for).

Durkan and Noble seemed particularly worried about the projected drop-off in revenues for Seattle Center and the Parks and Recreation Department, as that could put at risk programs and related staffing.

I showed you earlier the city’s projections for general fund revenues out to 2022. Here’s another look, including other revenue sources outside the General Fund. Under the “slow recovery” scenario, sales and B&O taxes are expected to mostly recover by 2022, but the total revenues are still projected to be a bit below 2019 levels. Part of the deficit is the blue line near the top: the Seattle Transportation Benefit District, which expires at the end of the year (and thus it goes to zero in 2021). Seattle’s elected officials plan to put a renewal transportation benefit district levy on the November ballot, but with the current economic climate its fate is unclear. 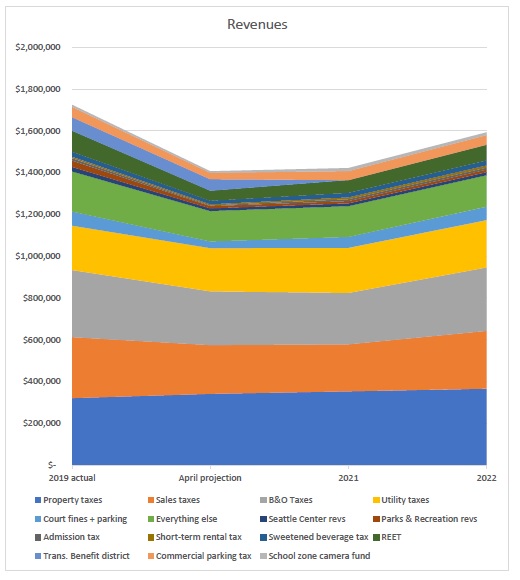 So what does this mean for the city budget?  According to Durkan and Noble, not only does the city need to write a balanced budget every year, but it needs to balance it quarterly. Durkan has already put in place some measures to control spending: a hiring freeze, restrictions on travel for city employees, and limits on consultant contracts. There haven’t been any layoffs yet (in part because it involves negotiations with the unions representing city workers).

And the city is eyeing a number of other options for filling the gap. It has a “rainy day fund” of $60 million whose purpose is precisely this: compensating for sudden revenue shortfalls. The city also has an “emergency fund” of $67 million that is intended to be used for emergency expenses (though at the moment there are plenty of those). And they are looking at existing fund balances to see which ones they are legally allowed to dip into. Durkan was unwilling to commit yet to an amount from the rainy day and emergency funds that she was willing to spend, saying that she needed to understand all the resources available first (though in truth, that decision isn’t hers to make — it’s the City Council’s). Durkan and Noble also said that they may consider whether the city should issue debt to cover some of the city’s expenses, taking advantage of its excellent credit rating. When asked whether issuing debt to cover a revenue shortfall might put the city’s credit rating at risk, a spokesperson for the Mayor’s Office answered, “Currently, not at the scale we are contemplating. Municipal debt may well be seen as generally more risky in the near-term given that municipal finances are directly linked to the health of local economies.  However, the overall diversity, our emergency and rainy day resources available, and recent strength of Seattle’s economy will continue to make us make a better credit bet than most other municipalities or states.” 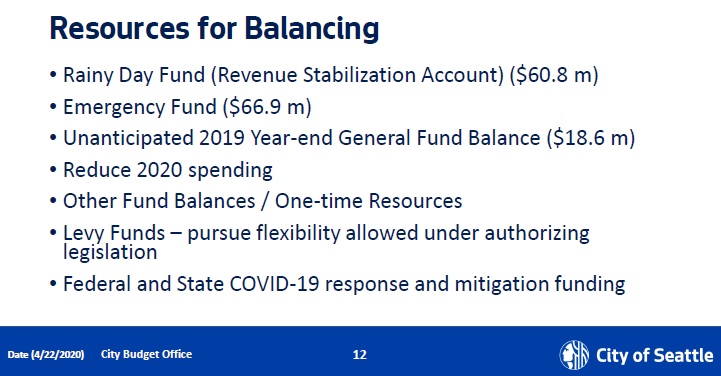 The city expects that much of its unanticipated expenses related to the COVID-19 response will be reimbursed by the state and the federal government; Noble said today that the city has already spent $15 million and that figure could eventually reach $100 million. Also, this week Congress is working on a $450 billion relief package that would direct more funds to states and local governments.

But if the city can’t cobble together enough money to cover the shortfall — and if it’s $299 million they almost certainly will not — then they will need to start making cuts to some existing programs in order to bring the budget into balance. That is not a skill that Seattle’s elected officials have exercised in about ten years, since the last recession, and even then not on the scale facing the city today. And none of the sitting Council members, nor the Mayor, were in office ten years ago, so there is zero institutional history at the top on how to do it.

Tomorrow the City Council begins to discuss the payroll tax proposed by Council members Sawant and Morales. As it is currently written, the revenues ($260 million in 2020, $500 million annually in future years) would go entirely to new spending, not to filling the revenue gap. It seems unlikely that the Council will find that acceptable given the new, stark reality they face.

Needless to say, Council Budget Chair Teresa Mosqueda, the Mayor, and the other Council members have some very difficult decisions ahead of them as they attempt to re-balance the city budget — while making good on campaign promises for programs the city should be funding.