Last Friday, Council member Alex Pedersen sent a letter to the City Auditor, requesting that he complete an audit report “to assess the physical conditions and maintenance investments for the major bridges owned by the Seattle Department of Transportation.”

Pedersen’s request comes on the heels of the closure of the West Seattle Bridge last month and revelations that the cracking issues that eventually led to the close had been known and monitored since 2013; they were not considered serious enough to warrant heightened concern until last summer.

In his letter, Pedersen provides details of the information he is looking to the audit to provide:

Some of this information is already known, if buried somewhat in documents published by SDOT and the City Budget Office. According to the 2019 SDOT Capital Projects and Roadways Structures report, SDOT manages 317 bridges, including 124 that the city fully owns and are worth $6.5 billion.

The average age of Seattle’s bridges is about 60 years, with a wide variance; 40 of them over 80 years old.

That places many of them beyond their expected design life, and many more approaching that point.

The Federal Highway Administration requires that all bridges be inspected at least every two years (and more often if they are known to have deficiencies). It also sets guidelines for rating of bridges: all bridges are given a “sufficiency rating” score from 0 to 100, where 100 is in ideal condition. They also set conditions for a bridge to be rated “structurally deficient” where a bridge has at least one major element in poor condition, and “functionally obsolete” where a bridge has geometry or clearance aspects that no longer meet traffic standards (which may have changed since the bridge was constructed).  According to SDOT, Seattle has 45 functionally obsolete bridges, and 6 structurally deficient ones. As of last year’s report, the average sufficiency rating for Seattle’s bridges is 68.94. In 2006, Seattle voters passed the “Bridging the Gap” $365 million levy for transportation infrastructure investments, and the city’s bridges benefited from that over the levy’s nine year span.

Generally speaking, maintenance for bridges and other structures (including most buildings) is broken down into two categories: “routine or preventative maintenance,” and “major maintenance.”  Major maintenance often deals with components that are expected to wear out or have a defined lifetime, such as a roof or a mechanical system. Well-run institutions have a long-term plan for major maintenance that anticipates when components will need to be replaced so that budget and logistical provisions can be made in advance for that work. Since major maintenance often involves expensive items, the budget for it can fluctuate significantly from year to year.  In contrast, routine maintenance encompasses all the things one needs to do to preserve and possibly extend the lifetime of a structure: cleaning, sealing out the elements, servicing mechanical systems, etc. Routine maintenance is much more predictable, and in fact industry guidelines suggest that the annual budget for routine maintenance should be in the range of 1-4% of the asset value of the structures. Whether it’s on the high or low end of that range will depend upon the kind of structure being maintained: a high-traffic drawbridge has very different needs than a retaining wall (though SDOT’s bridges and structures group maintains both).

As mentioned earlier, SDOT’s inventory of bridges and other structures is worth about $8.3 billion, of which bridges make up $6.5 billion. If we lowball the department’s routine maintenance budget at 1% of value, that would suggest it should be budgeting $83 million per year. Unfortunately, it’s nowhere near that: this year it’s about $10 million, including $7.6 million from the city’s coffers and $2.4 million from the Move Seattle Levy.  The good news is that it took a big jump up in 2016; the bad news is that it rose from “impoverished” only to “wildly insufficient.”

As of the end of 2018, SDOT had a backlog of 976 maintenance and repair work items, expected to cost over $10 million. And those are just the items that work orders were filed for: the bridge inspection reports often note other items needing attention but are marked “Continue to Observe,” to kick them down the road rather than filing work orders that will never get prioritized high enough to be taken care of. The inspection reports for the West Seattle Bridge are a case in point: inspections back at least to 2014 noted that the wires holding the fire suppression and water main pipes in place had been damaged along nearly the entire length of the bridge — and even though a work order was eventually filed on the problem, as of the January 2020 inspection it had still not been repaired.

SDOT, to its credit, is not hiding the problem of underfunding for maintenance; in fact, it calls it out explicitly in last year’s report: 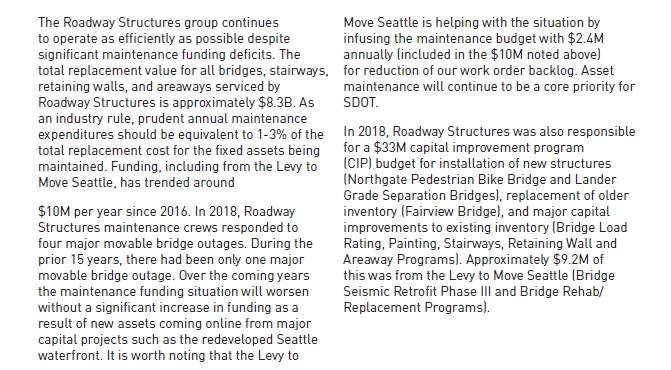 Why is routine maintenance so underfunded? A spokesperson for SDOT attributed it in part to a decline in federal transportation funding, which has fallen from 1% of GDP to .5% over the last 35 years. Congress has kept the federal gasoline tax, a primary source of transportation funding, at 18.4 cents per gallon since 1993 — while construction costs have continued to increase. For what it’s worth, Seattle is in good company: a 2017 report by the American Society of Civil Engineers found that 9.1% of America’s bridges are structurally deficient, and that the nationwide backlog of bridge rehabilitation work totaled $123 billion.

However, modulo the possibility of some token amount of infrastructure funding trickling down to Seattle in a future one-time COVID relief package, the sustained decline in federal transportation funding is unlikely to reverse itself in the near future. That leaves SDOT — and by extension the Mayor and the City Council — with another dilemma: how to address the chronic under-funding of bridge maintenance.

To be clear, there is currently little evidence that under-funding of routine maintenance on the West Seattle Bridge led to the cracking that eventually closed the bridge, though as the issues with the Pier 18 lateral bearing become better understood, that might become a contributing factor (the current thinking seems to be that it may have exacerbated the cracking, but it was not the original cause). It’s possible that the lateral bearing, if discovered to be a structural stressor early enough, could have been addressed through routine maintenance. The Pier 18 lateral bearing is noted in the 2014 inspection report as “extruding,” though not “locked,” and it is marked as “continue to observe.”

With the COVID-19 shutdown blowing a massive hole in the city’s budget somewhere in the range of $210-300 million, and an ongoing critical need for resources to address the homeless crisis, the timing couldn’t be worse to go looking for another $75 million per year for bridge maintenance. SDOT’s annual operating budget for 2020 is $322 million; it seems unlikely that $75 million of other spending can be cut to offset such an increase, and it seems equally unlikely that the department’s budget will suddenly be increased by 23%. This is especially true given the number of bridges near or at the end of their expected lives that will need to be replaced, including the Magnolia Bridge — and potentially the West Seattle Bridge.

In Pedersen’s letter to the City Auditor, he acknowledges that it will take some time to complete the audit and deliver the report, especially since SDOT is very focused on preserving the West Seattle Bridge at this moment. However, he asked for an interim report in mid-September, in time to inform the Council’s 2021 budget deliberations. No doubt the $75 million annual under-funding in routine maintenance will be highlighted. It will likely be accompanied by more bad news about bills coming due soon for major maintenance, and in some cases replacement, of several bridges in the near future.

1. With some additional data supplied by SDOT, here is a chart of the annual routine maintenance budget, compared to actual spend. 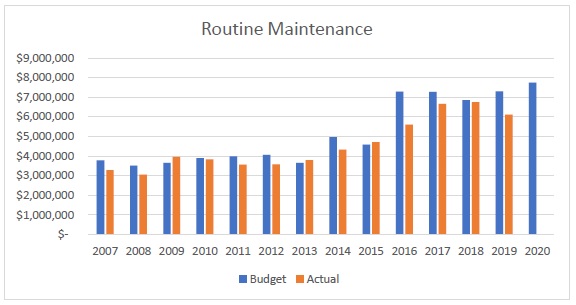 You can see for the most part they track, though in recent years SDOT has struggled to spend the full annual budget — a bit strange given how dramatically under-funded it seems to be. This is the kind of thing one would expect to see for a major-maintenance budget, where one delayed, expensive project toward the end of the year would leave a good chunk of money unspent (though it would likely be carried over to the next year). But routine maintenance should not have the kind of under-spend SDOT had in 2016 and 2019. That suggests they need to re-think the way they are planning and scheduling maintenance work to better utilize the budget they have — especially given a 1000-item backlog of work items.

2. Earlier this week, SDOT sent a letter to Council member Pedersen in response to his request for an audit of bridge maintenance. In the letter, SDOT Director Sam Zimbabwe pledges his cooperation with the City Auditor and the Council, “to help illuminate for the public and Council the physical conditions and maintenance investments needed to ensure the safety and longevity of all of the roadway structures owned by SDOT.”