Yesterday in another marathon committee meeting, the City Council delved further into the intricacies of the payroll tax proposal put forth by Council members Kshama Sawant and Tammy Morales.

Where last week’s meeting focused entirely on the spending plan, this week’s briefing covered the tax ordinance itself as well as the proposal to borrow $200 million from other city pots of money through an occasionally-used “inter-fund loan” mechanism.

Much of the discussion on the payroll tax concerned which businesses would pay it, and which would be exempt. Pay to independent contractors would count as “payroll expense,” to ensure that Uber, Lyft, PostMates, DoorDash, and other “gig economy” companies fully account for their workforces. The story for conglomerates of smaller companies and franchises is slightly more complicated: essentially, the rule would be that employees accrue to a business license, so McDonalds will total up the employees at all the franchises it directly owns, but an independent franchise owner with their own business license will only count their own employees. In a similar vein, a holding company that owns multiple businesses, each with its own business license, will tally each one separately and only pay for those businesses that exceed the $7 million payroll threshold on their own.

The Council also reviewed the pertinent dates: companies would start accruing tax liability for their payrolls on June 1, 2020, but would not make their first tax payment until the last quarterly payment for 2021 — which is due in February 2022.

Most of the inter-fund loan briefing focused on how much money is expected to be available in each of the six pots of money that the bill intends to borrow from. The bill as currently written authorizes borrowing a total of $200 million across the six funds, with no more than $50 million from a single fund; so it could be implemented as $50 million each from four funds, or smaller amounts across five or six.

However, the City Budget Office’s current estimates for year-end fund balances for the six funds, partially accounting for the COVID-19 recession, paint a different picture. On paper, the total amount potentially available for inter-fund loan is greater than originally estimated, but nearly all of it is in one fund: the Low Income Housing Fund. That means that, at a minimum, the legislation would need to increase the $50 million cap on loans from each source in order to source the entire $200 million. 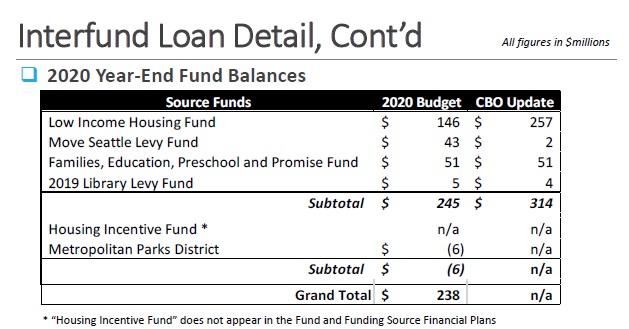 The Low Income Housing fund is used to partially fund affordable housing projects around the city, and is leveraged to secure other private and public funding sources as well: the city makes the initial commitment of a certain dollar amount to a project, months or sometimes years in advance of when a project will need the money, and that commitment is used to entice other funders to join in. So from a cash-flow perspective, money could be sitting there for a long time, while on paper the dollars are allocated to projects. That makes borrowing possible, but tricky: if for some reason the money hasn’t been repaid yet by the time the housing project needs it, then it could delay or jeopardize the project.

All six of the funds are mainly fed by property taxes, which are expected to remain relatively stable in the COVID-19 recession. However, payroll taxes are expected to fluctuate, which creates a rick for repayment of the inter-fund loans. Currently the city is forecasting a 12% decline in payroll in Seattle for the purposes of calculating tax revenues, though it’s challenging to know at this time whether that is is appropriately conservative.

Council member Sawant hammered on the point that, in her view, inter-fund loans are a “routine practice” by the city that creates little risk and are not controversial. Council staff backed her up to a certain extent, providing a list of other projects (above) that had utilized inter-fund loans to accelerate their timeline in advance of revenues being collected. But they also noted that the proposed inter-fund loan of $200 million is much larger than the historical ones. In addition, staff pointed out that while the city has always repaid its inter-fund loans (with interest), there have been cases where those payments were late. A question left unexplored was the awkward timing: as written, the loans would need to be repaid by December 31, 2021, but the first revenue collection for the payroll tax would not occur until February 2022. As mentioned in the slides above, they anticipate that “accrual accounting” would be used to repay the loans on paper, even if the city didn’t have the cash in hand yet. That could be fine, if the cash isn’t needed by then for housing or other projects.

In last week’s meeting, City Budget Director Ben Noble suggested that these same pots of money might be needed to help cover the expected revenue deficit in the 2020 city budget — currently projected in the range of $210-300 million. That would make them unavailable for inter-fund loans for accelerating the payroll tax spending plan. Council member Lewis took note of that in this week’s meeting, expressing great concern that committing the funds to the payroll tax plan might set off a “massive time bomb” for the city’s general fund budget. Sawant countered by saying that she believed using fund balances to cover budget shortfall is a form of “austerity budgeting.”

Council member Gonzalez drilled in on the implications of passing the bills as emergency legislation: passing them would require a 3/4 vote by the Council (7 of 9 members), plus the Mayor’s approval. If the Mayor did not sign the bills, then the Council would not have the option to override. In that case, their full range of options for the Council to pass the payroll tax are less clear: they could re-introduce it without the emergency clause, which would allow them to pass it with a simple majority vote and override a Mayoral veto, but then it wouldn’t go into effect immediately and would be subject to a voter referendum vote. The Council might be able to introduce a new emergency bill with other modifications, but it’s uncertain how extensive the modifications would need to be in order to qualify as a new bill (they are restricted in their ability to reintroduce exactly the same bill). For her part, Sawant defended the choice to introduce the tax as emergency legislation, arguing that it was not done to avoid a referendum but because it is a true emergency that requires immediate action — and because the city would lose $40 million in potential revenues if the bill isn’t put into effect immediately. She also expressed her confidence that they would win a potential referendum vote, if it came down to that, but reiterated that it would unacceptably delay relief payments to workers until 2021.

Gonzalez also questioned whether the city’s legal department was certain that the city had the authority to borrow money from the targeted internal funds, since their revenues come from voter-approved levies that seemed to neither authorize nor prohibit inter-fund loans. In order to avoid disclosing attorney-client privileged information, Council staff declined to answer that question directly, but they did affirm that the legal department had been consulted on that question.

One other question was left unasked: whether the city currently has the authority to pass this legislation given the Governor’s prohibition on public agencies taking action on items not either “necessary and routine” or responding to the COVID-19 emergency. The payroll tax legislation is mostly a $500 million per year payroll tax, with no expiration date, to pay for affordable housing and “Green New Deal” projects, which was drafted before the COVID-19 emergency was declared and later tweaked to divert $200 million from the first year’s revenues to COVID-19 relief. Is that enough for the entire bill to qualify as responding to the COVID-19 emergency?

Before the briefing began, there was about half an hour of public comment, which was weaponized by both the “Tax Amazon” campaign and by a coalition of business owners to express their respective support and opposition to the payroll tax. Following that was a panel of community members invited by Council member Mosqueda to discuss the community’s needs with respect to the COVID-19 emergency. To no great surprise, all of the invited panelists spoke in favor of the payroll tax — though Molly Moon, the founder of the local ice cream shop chain, expressed concern both at the divisiveness of the campaign for the tax, and at the implications for her customers who work for the large companies that would pay the tax.  Mosqueda, who chairs the committee hearing the legislation, didn’t flinch at the one-sided perspective of the panel, but did say that she hopes to bring in other panels of stakeholders before they finish deliberations.

The payroll tax legislation will be taken up again on May 13th. You can watch yesterday’s committee hearing on the Seattle Channel.