Last week SDOT released a consulting engineer’s report that answers the question, “if the West Seattle Bridge were to fail, how exactly would it fail?” The department asked the question to help it plan for emergency procedures — including an evacuation of nearby areas — if it determined that a failure were imminent.

While a failure of the West Seattle Bridge would likely not be quite the spectacle that the collapse of the Tacoma Narrows Bridge was, according to the engineers’ analysis it would still be a sight.

In previous articles I’ve discussed the structure of the bridge, and how it was assembled; both are key to understanding the failure scenarios. Briefly: the bridge is built as segments of hollow concrete girders that have steel tendons running vertically and horizontally across the width of the span to hold a segment together, and horizontally along the length of the span to tie segments together and secure them to the pier columns (or “piers”). 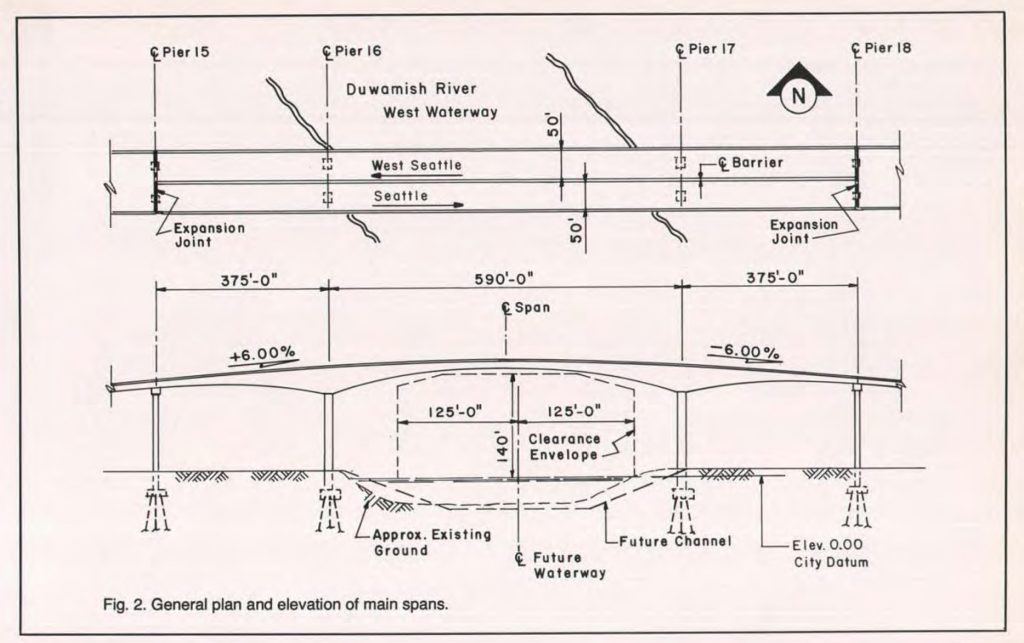 It was assembled starting at the columns and cantilevering out in both directions at the same pace in order to keep everything balanced, using a “form traveler” to pour one segment at a time, something like this:

When the two sections of the main span met in the middle, a final segment was poured to plug the hole and connect the two into a single span.

It’s helpful to think of the bridge as a series of see-saws tied together at the ends, all balanced, with the columns they rest on serving as the fulcrums.

As we know from SDOT’s inspections, there are two places in the main span where cracking started at the underside of the girders and worked its way up the side. Separately, the concrete slab underneath the bridge deck has also been cracking. The side cracking continues to advance up, and SDOT and its engineers are concerned that if it makes it all the way to the cracked slab at the top, then the bridge could rupture all the way through.

There still aren’t definitive answers as to why the bridge is cracking, but their best guess is a combination of factors including that the places where the stresses on the bridge are the greatest are not where they were originally calculated to be, and that the “creep” of the concrete over time has caused the steel tendons holding the bridge together to stretch and yield (but not break — yet). The stuck bearing in Pier 18 probably doesn’t help, nor does that fact that as the concrete continues to crack it further shifts the distribution of load and stresses.

There is a possibility that the bridge will find a new equilibrium point and the cracking will stop on its own, but SDOT’s consulting engineers think that the probability of that is very low. They believe that the more likely scenario is that without reinforcement, the concrete cracking and tendon stretching will continue until the tendons rupture, pull out of their anchorage, and/or are ripped out of the concrete; then a section of the bridge fails, and the redistribution of forces from that failure could stress or damage other parts of the bridge structure.

This is as good a time as any for a reminder: SDOT does not believe at this time that a failure of the bridge is imminent, and it is working hard to prevent such an occurrence. It has already taken one step to relieve some of the load on the bridge by closing it, it is currently working on another step (fixing the lateral bearing on Pier 18), and it is planning how to shore up the bridge starting this summer. By exploring these “modes of failure,” SDOT is prudently ensuring that it understands and is prepared for what it might need to do in the worst-case scenario. Good for them.

There are two scenarios for how the main span might fail: “symmetric” and “asymmetric.” The “symmetric” scenario is based upon the fact that similar cracking is happening at two places on the main span, approximately equidistant from the center of the span. The diagonal cracking on the underside and walls is known as “shear cracking” and signifies insufficient structural support for the center part of the span.  In the symmetric failure scenario, both cracks rupture at the same time, and the under-supported section of the span in between the two cracks disconnects and drops straight down into the water below.

The main post-tensioned steel tendons supporting the span are along the top of the bridge, and if they are ripped out from the concrete they might stay intact and leave the bridge somewhat precariously tied together. The big question then is how unbalanced that leaves the two see-saws at Piers 16 and 17. Since there is no hinge at the top of the columns the unbalancing forces will be transferred into the columns. And as we know from lever theory (and nutcrackers), a small amount of motion far away from the fulcrum creates an enormous amount of force near the fulcrum. If the force is great enough, the columns are likely to deform, and might tip or break.

As that occurs, the downward forces on the spans to either side of the main span (between piers 15 and 16, and 17 and 18) could bend — and possibly break — those spans as well. And that would potentially unbalance Piers 15 and 18.

When looking at the symmetric scenario, we saw that both remaining sections of the main span would likely be lighter than their counterparts on the other side of Piers 16 and 17; they would tilt up, and the adjacent spans would be pushed down. In the asymmetric scenario, however, the long section is dramatically heavier than the other side of the column, and it is cantilevered so far out that the forces it would apply to the column would be extraordinary. It would be pulled down, and it would push the adjacent span up.

But if we look at that extra-long part of the main span that remains, we realize immediately that the status quo won’t last for long. The steel support tendons on one side of the main span were not designed to sustain the weight of that much of the bridge, so the span itself is likely to break — and probably at its weakest point, the other existing crack. But the pier column was also not designed to handle that much unbalanced weight, and it will deform. The only question is which will happen first, and how quickly.  If the span breaks apart first, then we’re back to the “symmetrical” scenario. If the column tips over first, then it will rip apart the adjacent span as it is pulled up and out.

Both the symmetrical and asymmetrical scenarios raise the question of how far out from the center a failure will propagate. Keeping in mind that the bridge is essentially a line of see-saws tied together, every time one half of a span is pushed down by a rotating column, it pushes down on the other half of the span as well. If they bend but don’t break, then it creates rotational force on the next column over; or if it breaks mid-span, then it potentially unbalances the next column. The alternating up-down effect could continue to move out from the center across the spans and through the columns. Of course, there are several factors that will mitigate that, including the extent to which the girders and columns can absorb the forces rather than bend; and the fact that farther out from the main span the bridge is lower and the spans between columns are closer together.

So we don’t entirely know what would happen if the bridge were to have a failure on the main span. SDOT’s engineers seem fairly confident that the two directly adjacent spans would see damage, but it’s possible that the damage could cascade out farther than that. According to the engineers, spans and columns that see damage would need to be demolished.

SDOT’s emergency plan defines a probable area impacted if the bridge were to fail that includes the main span plus two adjacent spans on either side.

Then to be on the safe side, they added another 75 feet on either side to their “fall zone” that would need to be evacuated. SDOT believes that the real-time monitoring equipment they have in place will give them ample advance notice to organize a safe evacuation of the fall zone, if it ever comes to that.

Let’s all hope that we never have to find out which of the engineer’s scenarios was the correct one. But if the bridge does fail, I hope someone captures it all on video — it could be dramatic.