With the issues of police misconduct and excessive use of force on the top of everyone’s minds given last week’s police killing of George Floyd as well as the events of this past weekend, it’s worth having a quick refresher on how Seattle’s police accountability system works, and what the process is for investigating police misconduct.

Let’s start with the accountability system, which was established in 2017. There are three components, all civilian-led and independent of the police department:

The Office of Police Accountability is the main investigative arm; it receives complaints both from inside SPD and from community members, and is empowered to investigate those complaints as it sees fit. It has a team of investigators, including both sworn SPD officers on full-time assignment to OPA and also civilian investigators. While it might seem inappropriate to have officers serving as OPA investigators, the feedback from OPA leadership is that the officers provide important context on how officers perform their job — and somewhat counter-intuitively, many stakeholders have observed that the officer-investigators are often tougher on the officers they are investigating than the civilian investigators. OPA makes recommendations back to the Chief of Police as to whether officers should be disciplined as a result of a complaint; however, the decision to discipline an officer is ultimately the Chief’s, not the OPA’s.  OPA also has the ability to direct its own investigations independent of whether a complaint has been filed. The Director of the OPA is nominated by the Mayor and confirmed by the City Council; he or she is a civilian with relevant expertise, and may not be a former sworn SPD officer. The OPA Director may serve for up to three four-year terms, and may only be removed for cause by a majority vote of the City Council.

The Office of the Inspector General has two main responsibilities: it provides a final “quality control” certification on OPA investigation reports (and can send them back for a re-do if they are not thorough, timely and objective), and it is responsible for reviewing and auditing SPD processes and operations and for recommending changes to department policies. The OIG also handles complaints of OPA misconduct. The Inspector General is nominated by the Council’s public safety committee and confirmed by the full City Council. The IG can serve a maximum of two six-year terms, staggered from the OPA Director’s terms, and also can only be removed for cause by a 2/3 vote of the Council.

The Community Police Commission is the official “voice of the community” in the accountability system. It reviews and provides input to stakeholder entities on the police accountability system, police services, and SPD policies and practices, including on recommendations from OPA and OIG. The CPC also provides assistance to SPD on soliciting community input as necessary. There are 21 CPC commissioners; 7 are appointed by the Mayor, 7 by the City Council, and seven by the sitting members of the CPC as an opportunity to ensure the commission broadly represents the community. Commissioners can serve up to three three-year terms. Commissioners may only be removed for cause by the appointing authority. The CPC also:

Here is a memo prepared by the Council’s staff that provides more detail.

The disciplinary process for police officers is very complicated, due to being a mix of federal, state and local law as well as negotiated processes in the collective bargaining agreement between the officers’ union (SPOG) and the city. A quick reminder: under state law, police officers are prohibited from striking; but in return they have specific guarantees in terms of their ability to negotiate terms of employment and working conditions, and specific rights (such as arbitration). The union can choose to negotiate those guarantees and rights away in return for other bargaining concessions, but the city may not unilaterally refuse to provide them or negotiate for them in labor agreements.

SPD categorizes its use of force into four types (or levels — SPD uses them interchangeably):

Type III use of force is also subdivided into “officer involved shooting” (OIS) and other types of severe force.

The supervisor, FRU and FRB may flag any incident of the use of force for disciplinary action, or may refer it to the OPA for an investigation or to the City Attorney for criminal prosecution. The OPA director also has access to reported uses of force and has the authority to pull any out of the internal review process for investigation and possible recommendation for disciplinary action or referral for criminal prosecution. And if the OPA receives a complaint, either internal or external, related to a use of force then that incident may be pulled over to OPA for investigation and possible recommendation for disciplinary action or prosecution. Once OPA takes over, the internal review process is terminated.

The OIG has provided an overview of the disciplinary process, along with some helpful “subway map” diagrams. 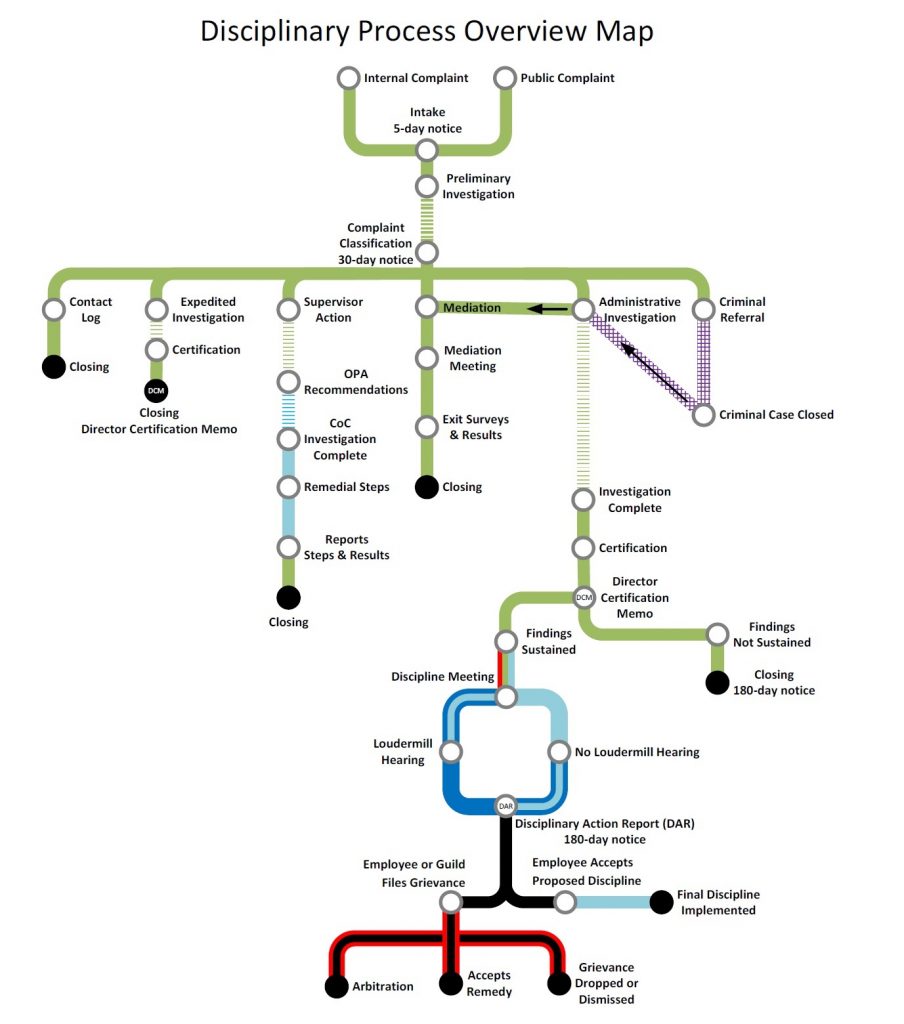 Of particular interest are the grievance and arbitration processes, which are one of the reasons that Judge Robart last year found the city out of compliance with the Consent Decree. The arbitration process allows for “forum shopping” by officers between the Public Safety Civil Service Commission (PSCSC) and an outside arbitrator, and allows the arbitrator to overrule a disciplinary decision by the Chief of Police (something Robart found particularly problematic).  However, under state law public safety officers have the right to arbitration as a path for appealing disciplinary findings, in part to compensate for the fact that they are forbidden from participating in labor strikes. The 2017 Police Accountability Ordinance removed arbitration as an option, forcing all appeals to go through the PSCSC, but arbitration was reinstated as part of negotiating the SPOG contract (because the city can’t unilaterally take it away if the officers don’t want to give it up). 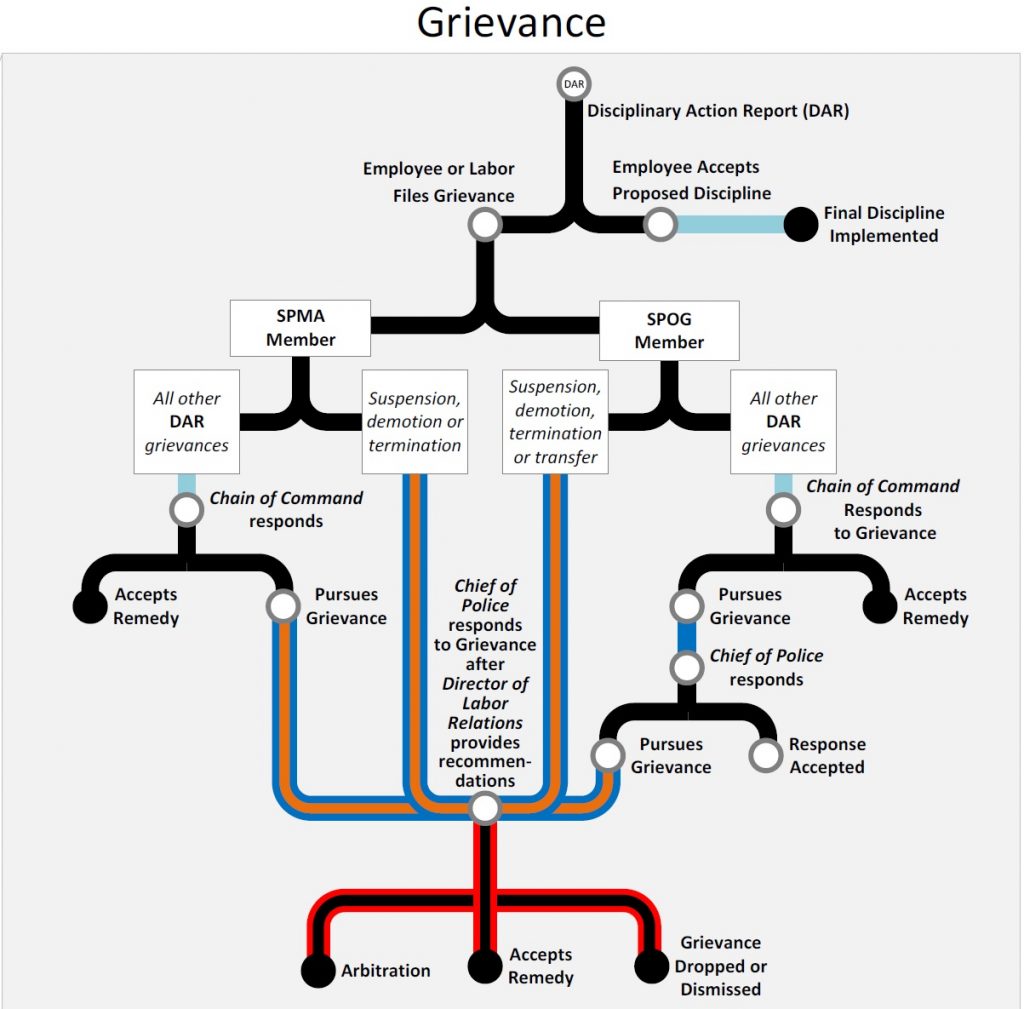 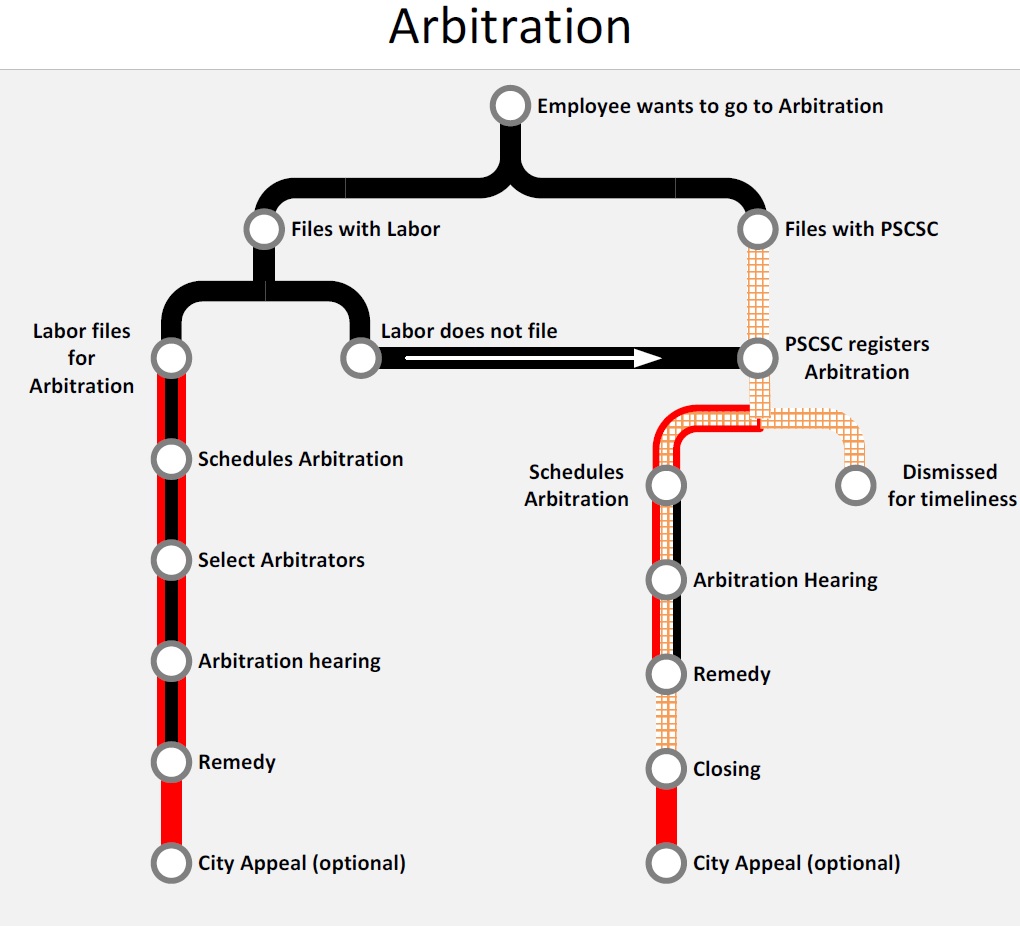 The CPC has raised a long list of issues with the accountability process, of which the multiple appeals paths is only one. A key one is that the OPA only has 180 days to complete an investigation before the “statute of limitations” effectively prevents an officer from being disciplined for misconduct. That is not entirely unreasonable, for all the reasons that statutes of limitations exist in the first place: as time passes, it becomes more difficult for a defendant to gather evidence to mount a robust defense. And there are exceptions to the 180-day rule, including when an officer has not been forthcoming with relevant evidence or lied, or when SPOG voluntarily extends the deadline.

That is particularly relevant now, given the events of this past weekend and the 12,000 complaints the OPA has received to-date. While the Mayor has promised to give the OPA any resources it needs to follow through on investigations, it has an enormous task ahead of it to interview witnesses and complainants, gather and review evidence, and make recommendations.

It’s important for us to understand that the OPA will likely take months to make recommendations on many of the complaints it has received this week, despite the desire of many of us to see swift justice for alleged police misconduct. OPA Director Andrew Myerberg has made clear that he will not be issuing findings on a complaint until a full and complete investigation is performed. So we all need to exercise patience.

As to the issues that the CPC has raised with the accountability process: while there is hope that they will be addressed in the upcoming round of contract negotiations with SPOG, there is no assurance that they will. Today Mayor Durkan said that she will be working on a method for community members to have greater say in those negotiations, but at the end of the day it will probably require pressure on SPOG to drive a different outcome. An interesting first step is that a petition is being circulated to oust SPOG from the MLK Labor Council. In the meantime, the city has submitted the assessment of the accountability system that it hired an outside consultant to produce, and it has committed to telling the judge overseeing the consent decree by August 1 how it plans to address the issues raised.

Last month the city filed a motion with the court to terminate most of the consent decree, with the exception of the issues related to police accountability. The judge has already found the city to be in compliance with the consent decree on all the other issues, and the city just completed a required two-year sustainment period. However, as more data becomes available on the events of the past few days, that may call into question whether compliance has truly been sustained, and some have called this week for the city to withdraw its motion. The Mayor has not yet indicated whether she intends to do that.