Last night and this morning, there were various (often conflicting) reports on social media about a possible burglary in the CHOP (formerly known as the CHAZ) area on Capitol Hill that is the site of an ongoing occupation and protest. There has also been conflicting information about whether first-responders have been told not to enter the CHOP if the city receives a 911 call from there.

I asked the Mayor’s Office what SPD and SFD have been instructed to do if the city receives a 911 call from the CHOP. Below is their full response.

The City of Seattle has been on site working with many of the organizers every day – this includes Fire Chief Harold Scoggins – to help ensure the safety of individuals, residents, and businesses. Chief Best and SPD have been on site multiple times, and there is no “police free” zone in the City. City staff, including representatives from the Mayor’s Office, Fire Chief Scoggins, and department directors from Seattle Public Utilities (SPU), the Seattle Department of Transportation (SDOT), and the Office of Economic Development have been meeting daily with CHAZ/CHOP leaders to work with the organizers on sanitation, hygiene, and any other needs since June 9. Utilities including Puget Sound Energy and SPU have been able to respond to the area for service.

The Seattle Police Department will respond to significant life-safety issues within the CHAZ/CHOP (defined as the shaded area in the below map). The Seattle Police Department’s definition of life-safety issues may include an active shooter incident, an assault, a structure fire, significant medical emergency (i.e. heart attack, stroke, trauma) and other incidents that threaten a person’s life safety. The Seattle Fire Department will respond to fire and medical emergencies within the CHAZ once SPD officers secure the scene and say it is safe for fire crews to enter. For all other calls originating from this area, SPD dispatchers and officers will attempt to coordinate officer contact outside of these boundaries when safe and feasible. 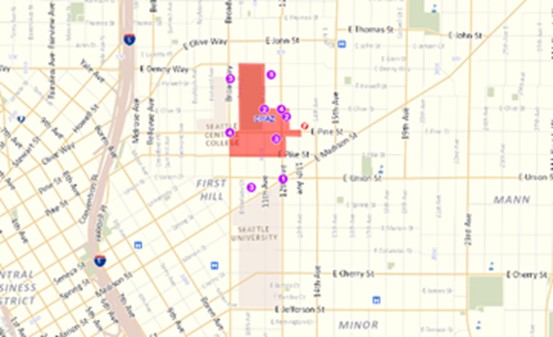 As part of this effort, SFD has worked with the volunteer medical staff at the site to ask that if a person becomes injured in this area, residents walk them to the perimeter of the crowd and call 9-1-1 to report their location. SFD fire extinguishers and Mega Movers (portable stretchers), have been provided by the fire department to the volunteer medical staff (unaffiliated with the City) to assist with this effort. Additionally, SFD has advised businesses in the area on how to proactively remove combustibles, such as removing garbage and recycling on a daily basis to minimize the risk of intentionally set fires spreading. It is incredibly important to clear a pathway for emergency vehicles as the respond into the area, so medical and fire responses are not further delayed.

Chief Scoggins and SDOT have also been meeting with the organizers to discuss how the City can appropriately allow additional traffic access to the area. This could include an updated footprint to facilitate more access and ensure CHAZ/CHOP residents can continue to protest peacefully around the East Precinct while allowing deliveries, sanitation, and easy access.

To sum up, according to the city:

There are obvious tradeoffs to this policy. It has clearly helped to de-escalate the nightly standoffs between protesters and the police. But it’s not what local businesses and residents expect when they call 911 — a service they pay taxes for the city to provide.