This afternoon, the Mayor’s Office released its proposed “rebalanced” 2020 city budget, accounting for the expected revenue shortfall as well as hefty expenses for responding to the COVID-19 pandemic.

Currently the revenue shortfall is predicted to be at the low end of the expected range: about $210 million. In addition, the city expects to spend $233 million this year on COVID, including $65 million in existing, redirected resources and $168 million in new spending. That leaves a total budget gap of $378 million to fill. 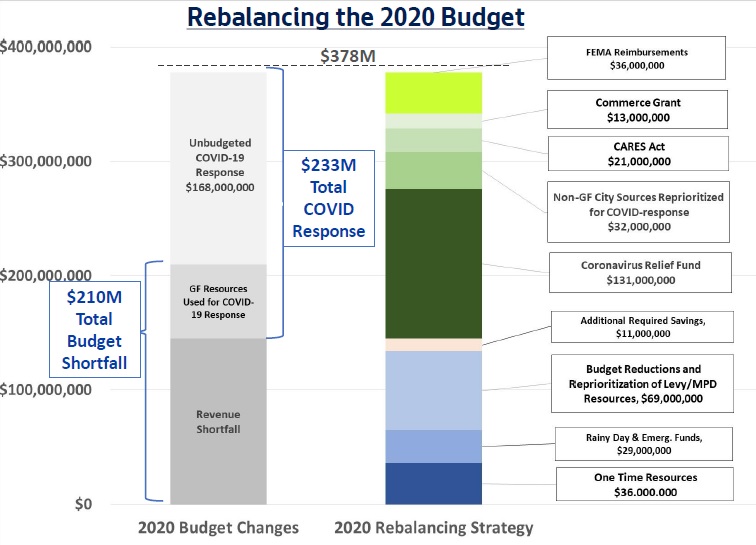 The Mayor proposes to cover this through a combination of measures:

There’s a lot of moving parts to this plan. Here are some things worth noting:

The big question on everyone’s mind, however, is what the Mayor is proposing for SPD’s budget given the calls for defunding the police department by as much as 50%. She is calling for $20 million in cuts in 2020, about 5% of the full year budget and 10% of the budget for the remaining half of the year — recognizing that the city can’t “unspend” what SPD already spent in the first six months of 2020. $16 million of that savings had already been identified prior to the protests and the calls for defunding SPD; since then, the Mayor’s Office additionally cut $4 million of capital funding earmarked for planning for a new North Precinct facility. We learned last week in the Council’s Budget Committee meeting that SPD’s hiring and attrition issues disappeared with the onset of COVID-19, and now SPD is on track to be fully staffed this year for the first time in several years. Unfortunately, that leaves little to reclaim in headcount expenses — and over 80% of SPD’s budget is headcount-related.  This will create a big challenge for the City Council to meet the demand for a 50% cut this year without laying off a lot of police officers. 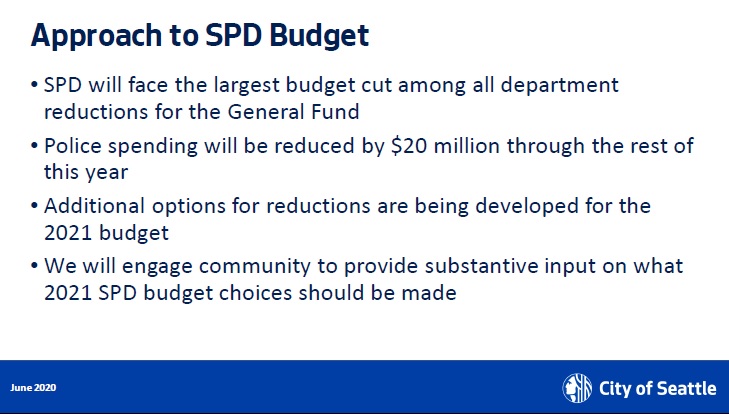 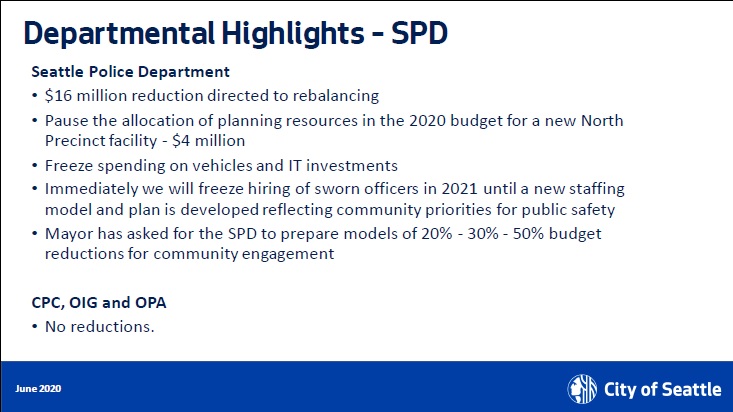 Durkan has instead promised to create a community-driven process for re-evaluating SPD’s budget, starting with next year’s. She has set aside $500,000 in the 2020 budget to fund that process through the Department of Neighborhoods. In addition, last week Durkan sent a memo to her senior staff letting them know that she has asked SPD and the Budget Office to develop preliminary budget scenarios for cuts of 20%, 30% and 50% to SPD’s budget in 2021, with an emphasis on understanding “where behavioral health professionals, social workers, case managers, community-based organizations, or civilians can better serve our community.” Durkan also directed that SPD officer hiring will be frozen for 2021 “until a new staffing model and plan is developed reflecting community priorities for public safety.”

In a small nod to community demands emanating from the recent protests, Durkan’s proposed budget makes a few concessions this year, including $5 million in new spending on mentorship programs with BIPOC youth. Plus there are a few not-really-budget-related items, such as finally executing on the much delayed transfer of three properties back to the community and a promise to “develop a new vision” for the East Precinct area along with the community. 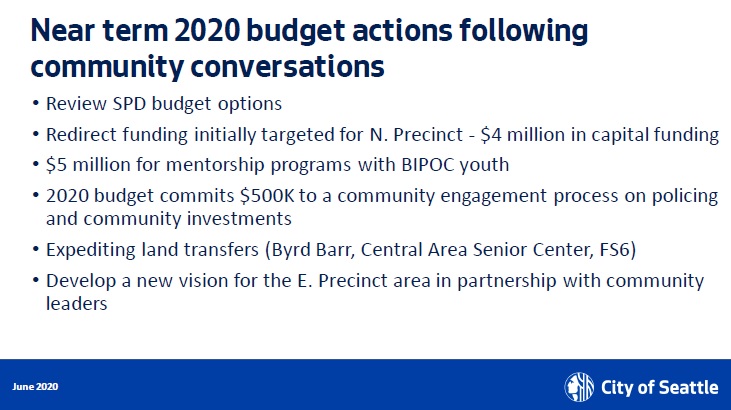 In sum, Durkan’s budget proposal realizes neither the worst fears of those expecting an austerity budget, nor the best hopes of those who wanted to see SPD’s budget cut in half and the funds redirected to community programs this year. 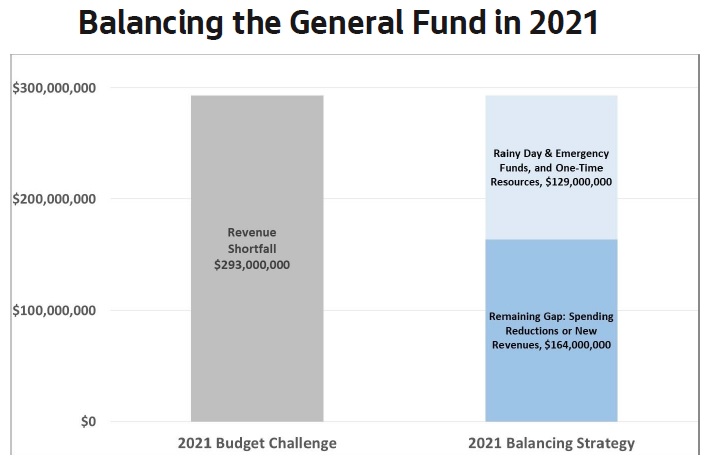 But 2021 is shaping up to be ugly. The City Budget Office expects a revenue shortfall of $293 million next year. By using the other 75% of the balance in the rainy day and emergency funds (about $129 million), it can cut the shortfall to $164 million. But it knows that some combination of new revenue sources and more painful budget cuts will be required to bridge that gap. The budget office notes that since 65% of the city’s General Fund spending is personnel-related, layoffs may be inevitable. 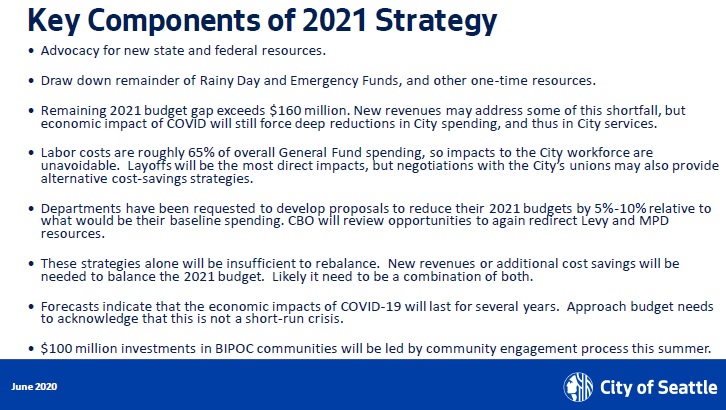 Both payroll tax proposals under consideration by the City Council right now would raise substantial sums next year, except that in both cases it would be allocated to new spending, not covering the potential revenue shortfall. Likewise, Council member Lewis’s forthcoming proposal for a capital gains tax would fund new spending on permanent supportive housing. Mosqueda’s plan would also tap into the rainy day and emergency funds in order to fund additional COVID-19 relief programs this year, but it looks like Durkan’s proposal leaves enough in those funds to cover what Mosqueda wants to use — so they are not mutually exclusive.

The Council will hear a presentation on the Mayor’s proposed budget revisions tomorrow afternoon in it budget committee meeting.

Later this week I will publish a separate “deep dive” on the SPD budget, where the money goes, and implications for making major cuts. In the meantime, here are the slides from this afternoon’s press briefing on the Mayor’s budget proposal, which contain extensive details on changes to funding and allocations: