The past month has brought calls for dramatic reductions to police departments budgets, including here in Seattle. In order to make sense of those demands, it’s important for us to understand how police departments request and spend their budgets. Here is a deep dive of the SPD budget, with a historical perspective, breakdowns from a number of different angles, a look at Mayor Durkan’s proposed 2020 cuts (as well as her early thoughts on next year’s budget), and some of the principles behinds calls to “defund the police.”

The City Budget Office provides SPD budget information going back twenty years, which provides a unique and important historical perspective on how the budget has grown and changed over the years. In 2001, the police department budget was approximately $229 million (in 2020 dollars); this year, the budget is about $409 million. For much of the past two decades, it has grown at approximately the same pace as the overall city “general fund” budget, except for the recessions of 2001-2003 and 2009-2011 when the city budget was trimmed down. At first glance it looks like the two diverged again between 2015 and 2019, but the story is a bit more complicated: that was the period where SPD officers were working without a contract and didn’t receive raises. After the new contract was signed at the end of 2018, there was a large lump-sum payment in 2019 for retroactive raises.

SPD’s budget has grown a bit faster than Seattle’s population (as has the city’s general fund budget).

But interestingly enough, SPD’s headcount has not — headcount growth has been significantly slower than Seattle’s population growth.

Put together, that means that over the years the amount SPD is spending per headcount has been growing, in fact about 50% over the last 20 years from $121,500 in 2001 to $186,900 this year.  We’ll come back later and look at where the money is going (spoiler: some is city accounting changes, some is related to compliance and training, and some is officers’ pay).

The most recent growth in the “Administration” budget is a reflection of a few things:

Patrol operations budget has grown by about half from $96 million in 2001 to $148 million this year. You can see in the chart below the creation of the Southwest Precinct in 2003 (spun out from the South Precinct). The Metro Response Unit, including the Harbor Patrol, was moved into Patrol Operations from 2003 through 2008. Other units moved in and out of Patrol Operations between 2014 and 2020.

Patrol headcount, however, was much flatter: starting at just under 800 in 2001, peaking in 2015, and shrinking somewhat over the past few years as SPD has struggled with hiring and retention issues.

After seeing some cuts in the recession of the early 2000’s, the investigations unit — and particularly criminal investigations — has seen fairly steady growth since then.

This year, several small investigative units previously under Special Operations were consolidated and moved into Criminal Investigations. And as you can see, the headcount numbers track with the budget numbers: the unit grew from 220 employees in 2003 to 379 this year. 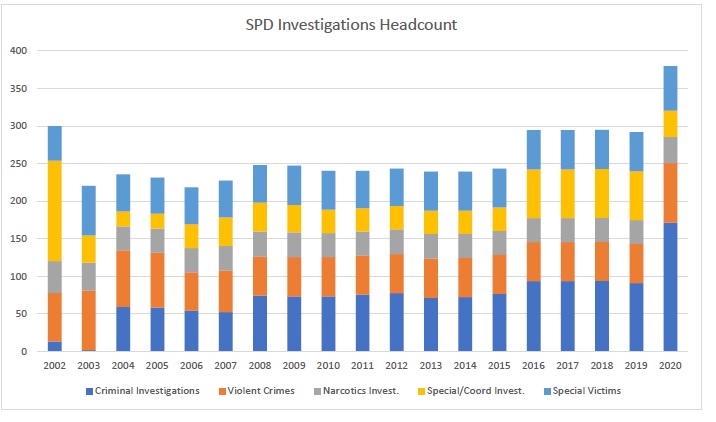 Now let’s turn to what the money is spent on. As with many other city departments, the vast majority of the department’s spending is on personnel-related expenses: about 82% on wages, benefits and overtime. 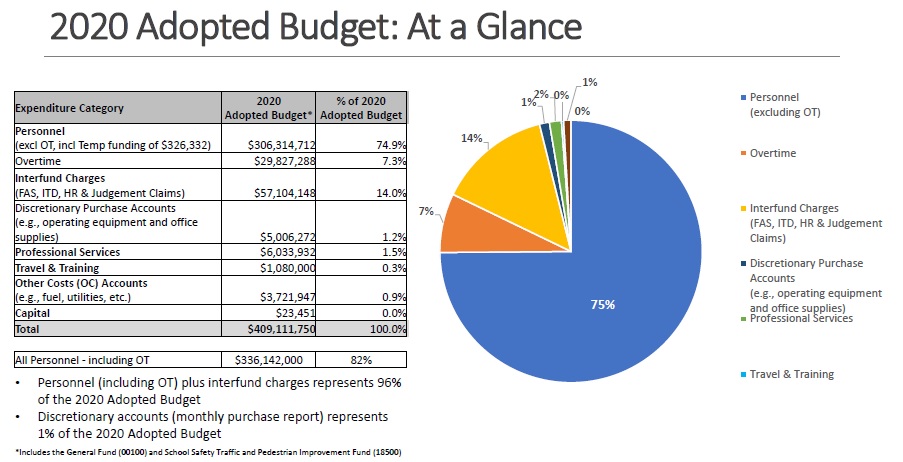 Another 14% is the inter-departmental bill-backs for central services we discussed earlier, most of which are in support of personnel: IT, HR, vehicle fleet services, etc.

Together that accounts for 96% of the budget in people-related expenses. That doesn’t mean it’s all going into employees’ bank accounts, but it directly scales up and down proportionally with the number of employees on the payroll. It includes both sworn and civilian positions: it may surprise you to learn that of SPD’s 2014 employees, almost 600 of them are civilians. 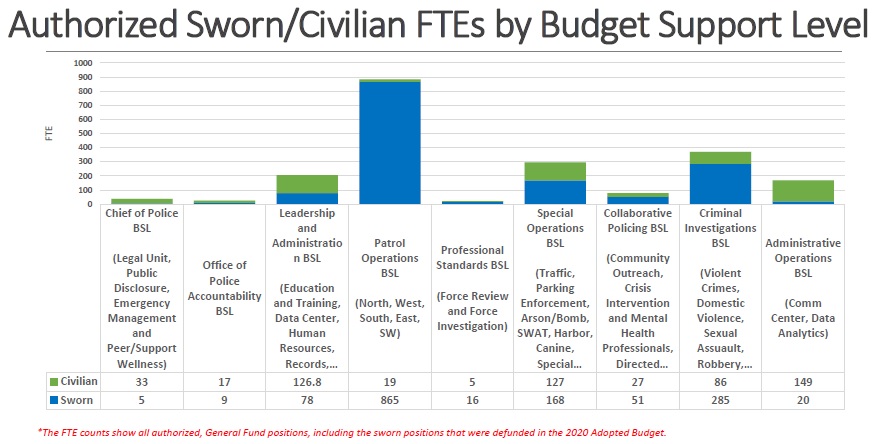 That said, the sworn officers are both more numerous and paid better, so the vast majority of the wages and benefits go to them.

Here’s a chart of the average cost per employee of the ten most common positions in the department (blue are sworn officers, green are civilians): 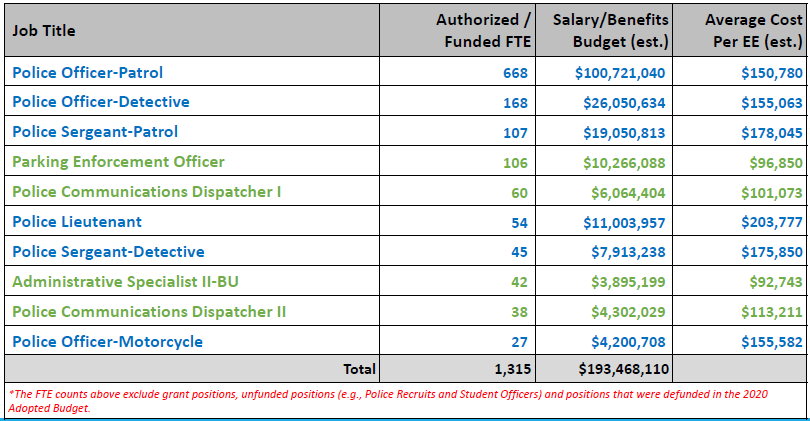 So where might we find obvious opportunities for savings or programs to cut?  In practice, that turns out to be tricky — a lot of work for not a lot of payoff.

Most of the equipment that officers wear and use, including “riot gear” that they use during crowd control activities, is issued when an officer joins the force and is only replaced as needed. That means that SPD’s equipment budget mostly just covers allocations for new hires and for some modest amount of replacement due to wear and tear, damage, or loss — in total only about $73,000 this year.

Similarly, crowd control weapons such as tear gas, pepper spray canisters, and blast balls are only purchased to replace existing stock that is either used or expired. The amount spent varies from year to year, and it will doubtless be higher this year given the events of the last month, but it will be in the low hundreds of thousands of dollars — again, not a large sum in a $409 million budget.

SPD currently budgets about $706,000 for the five School Resource Officers stationed at Seattle public schools; if that program is cut entirely (which it seems the school district will do), that still doesn’t save much.  In a similar vein, the budget for the police officers that are assigned to the Navigation Team this year is about $2.35 million, with an additional $47,000 for overtime put in by other officers in support of the Navigation Team.

The department has just under $30 million budgeted for overtime, spread over a number of departments. Much of the overtime dedicated to events and sports is reimbursed by the event organizers, though the reimbursement doesn’t go back to SPD — it goes into the city’s coffers. 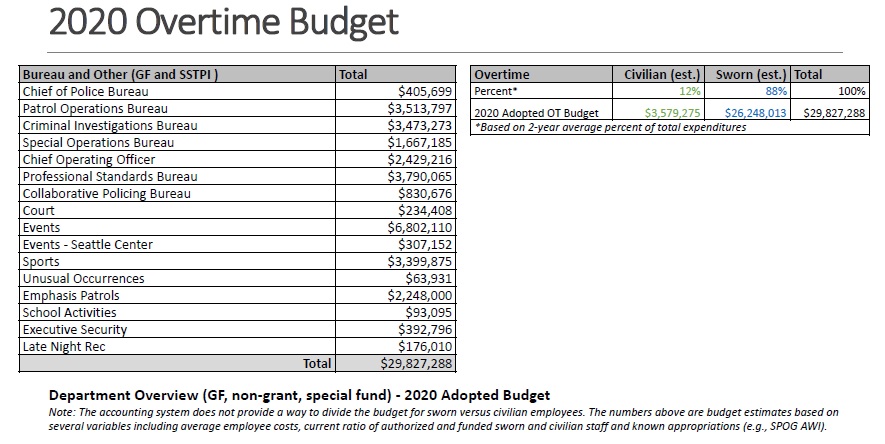 Last week I wrote about Mayor Durkan’s proposal for $20 million of cuts to SPD’s 2020 budget.  Of those proposed cuts, $16 million of reductions had already been identified in advance of the protests and demands for defunding SPD, largely due to budget restrictions put in place in response to the COVID-19 crisis and the ensuing economic meltdown. The only cut that came later, in response to the protests, is $4 million of capital funding to start the planning for a new North Precinct facility this year — that project is now on hold again.

Much of the overtime is from events, including sports, that didn’t or won’t happen this year due to COVID-19 restrictions in place. The “civilian vacancy savings” is from the hiring freeze currently in place, which in practice has only affected civilian positions in the department; since the COVID-19 emergency and economic meltdown started, SPD’s attrition has largely gone away; and since it had new recruits already in the training pipeline, for the first time in years SPD is fully staffed for sworn officers up to its budgeted limit. SPD has stopped hiring new sworn officers, at least through the end of the year.

Supplies, equipment, travel and training are all down anyway because so many employees are staying home and working from home. The “SPOG annual wage increase overappropriation” relates to the way the city set aside money to eventually provide back-pay for officers once their contract was signed; it was based on an estimate written into the contract for the annual inflation rate that turned out to be too high.

The North Area Capital Improvement Project funds were intended to start planning for a new North Precinct facility, after the last one was stopped because of opposition from advocacy groups. That has now been put on hold.

In sum, with the exception of the North Precinct funding the 2020 budget cuts proposed by the Mayor were all money that wouldn’t have been spent anyway — there isn’t any substantive belt tightening, let alone meaningful cuts to SPD. However, Durkan has directed SPD and her Budget Office to work on scenarios for cuts of 20%, 30% and 50% to SPD’s budget for next year.  Since the budget is almost entirely personnel-related costs, those kinds of cuts would inevitably involve layoffs. Their first estimate of the number of positions eliminated, assuming they keep the same ratio of sworn to civilian positions (which is admittedly not a very good assumption):

And that leads us to consider what would happen if the cuts were more directed, as the advocates of a “defund the police” approach are suggesting. They note that by some estimates only 10% of calls for service are for violence-related issues (SPD will be presenting their own statistics to the Budget Committee in the coming weeks).

There are already programs within SPD that are staffed with non-sworn personnel, including parking enforcement and the reconstituted Community Service Officer program; those could easily be spun out of the department. There is also a remarkable level of agreement that police officers are asked to respond to all sorts of calls that are not best served by sending someone with a badge and a gun, such as people in mental health crises, and funding skilled teams of workers who can more appropriately respond to those calls would be good for everyone involved — including the police.

But the bigger “defund the police” bet is that investing in upstream programs that prevent people from entering the criminal justice system in the first place will reduce the need for police and get us off the treadmill of year-over-year increases in the police department budget simply to maintain the status quo in a growing city. That includes programs addressing mental health, domestic violence, poverty and homelessness. There is research to back up that claim, but the challenge is planning the transition period since those programs take time to staff, incorporate into the emergency call system, and ultimately have an effect on the people they are intended to help. In an ideal world we would substantially increase the funding for those programs in advance of slashing the police budget, but it’s unclear whether there is the political will to increase overall spending now, or to wait on cutting SPD’s budget.

There will be difficult choices to be made in where to place those cuts: whether to decrease the number of patrol officers, or to shrink the investigations unit. Puget Sound Indexer reports that Seattle has a low rate of violent crime, but the highest rate of property crime of any large U.S. metropolitan area.

And that, at its heart, is the challenge before the Mayor and City Council in 2020 and 2021 if they want to respond to calls to re-think SPD’s budget: deciding how many employees to cut, what calls to stop responding to, and how quickly alternative programs will be staffed up.