This afternoon the Mayor’s Office announced its proposal for renewing the Seattle Transportation Benefit District. Assuming the voters approve, it will be substantially slimmed down from the current STBD that expires at the end of the year.

Under state law (pre-Initiative 976), voter-approved Transportation Benefit Districts may rely on a combination of revenue sources:

The current STBD imposed a $60 vehicle license fee and a 0.1% sales tax; this year it was originally budgeted to raise $63.8 million in revenues, $32.9 million from the sales tax and $30.9 million from vehicle fees. Combined with $20.5 million in carryover fund balance from earlier years, SDOT was expected to spend a toal of $84.2 million this year: 79% on added transit service, 5% on transportation-related capital projects, and 7% on the ORCA Opportunity and low income-access programs (the remaining 7% is held in reserve, in part to ensure a smooth transition for a few months after it expires until the next opportunity to change Metro routes and schedules).

And then the double-whammy of Initiative 976 and COVID-19 happened. Initiative 976 removed the ability for transportation benefit districts to impose vehicle license fees — voter-approved or otherwise. And COVID-19 has gutted sales tax revenues. However, the shutdown phase of the pandemic also dramatically reduced ridership, and it’s anyone’s guess how long it will take for demand to rebound. Lower ridership means heavy financial losses for Metro and Sound Transit, and some difficult choices about how to adjust transit offerings while minimizing the negative impact on low-income workers who depend upon transit.

The legal challenge to I-976 is now before the state Supreme Court — it held a hearing on the case last week — and until it decides, a major source of revenues is off the table. The economic prospects of the region over the next few years might make others unpalatable, such as increasing the sales tax to the maximum allowed 0.2%; sales taxes are considered one of the most regressive forms of taxes.

With all that in mind, the Mayor has proposed renewing just the sales tax levy at 0.1% for six years (2021 through 2026), and forgoing any other revenues. That is expected to raise about $20 million in 2021, growing to a little over $30 million by 2026 and averaging about $27 million per year over the six years. 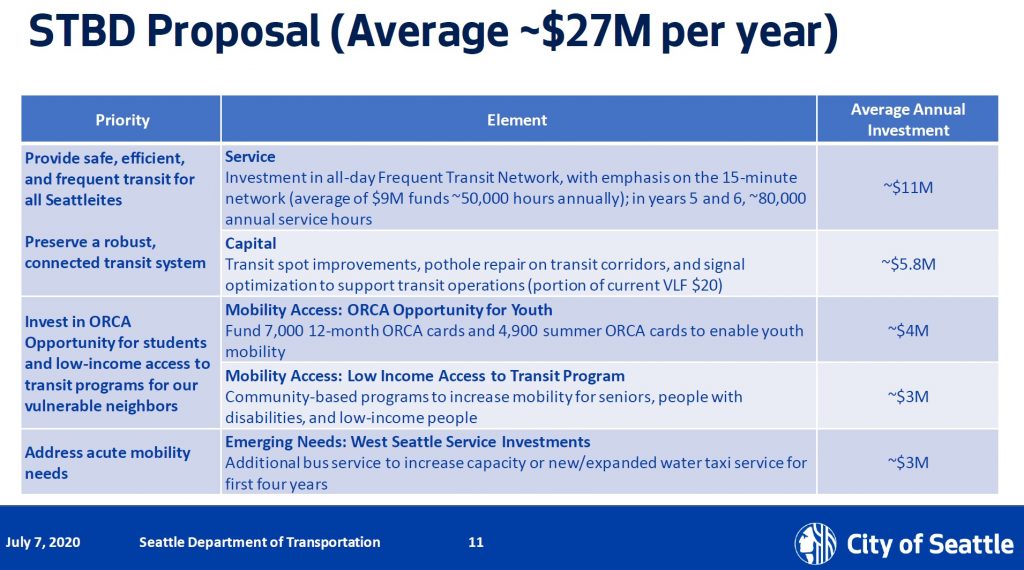 The Mayor’s proposal for using the revenues mirrors closely the existing STBD, with a major focus on adding transit to expand access to frequent transit, preserve a robust connected system, and continue to support the ORCA Opportunity and low-income access programs. Additionally, about $4 million per year over the first four years will go to addressing acute mobility needs in West Seattle as a result of the closure of the West Seattle Bridge. At first look, the focus on West Seattle might seem to contradict the equity goals, but SDOT argues that the current alternate routes have diverted substantial traffic through vulnerable neighborhoods such as Georgetown, South Park and Delridge, and that mitigating those impacts is an important equity consideration.

The proposal, as presented by SDOT, acknowledges that commute patterns have changed substantially this year and may take a long time to go back to the way they were — if ever. Accordingly, it is light on specific projects and leans on the need for flexibility to design to new patterns of travel, while still setting goals for mode share. 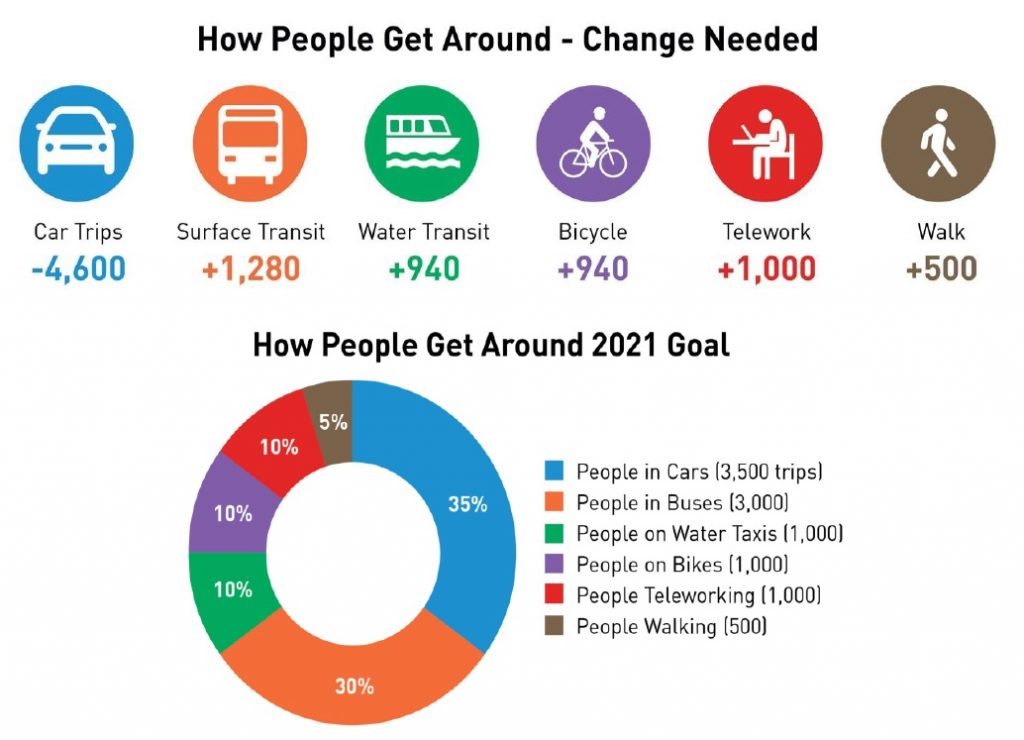 The City Council will deliberate on the Mayor’s proposal and decide whether to place it (potentially modified) before the voters on the November ballot. Council member Alex Pedersen will chair a special Select Committee on the Transportation Benefit District that will be the focus of the deliberations. Pedersen announced earlier this week that the committee will meet both this Friday and next to hear, discuss and potentially vote on the renewal proposal.