Late this afternoon the City of Seattle filed a response to the motion earlier this week by Black Lives Matter and the ACLU to hold the city in contempt for violations of the preliminary injunction put in place by Judge RIchard Jones last month. That injunction put restrictions on SPD’s use of crowd-control weapons, include tear gas and blast balls.

In its filing today, the city denies wrongdoing by the department (though not necessarily of individual officers, who are subject to investigation and disciplinary procedures for their actions). The major points of its argument are:

Judge Jones has scheduled a hearing for 9:00am Friday morning.

Among the declarations included with the city’s filing today is that of SPD Lieutenant John Brooks, the Deputy Operations Section Chief last Saturday evening, and the one who declared the protest to be a riot. He details the intelligence that the department recieved from the FBI in advance of Saturday’s protests and riot:

In advance of the July 25, 2020 demonstration, we received intelligence information from the Federal Bureau of Investigations that anarchists were driving up to Seattle from California and Portland, bringing explosives and radios with them in a van. The intelligence bulletin informed us that these anarchists planned to cache the explosives in various locations in Seattle, so they could more easily access them during the July 25 demonstration.

Brooks also described the tactics that protesters were allegedly using to coordinate their actions:

In recent demonstrations that have resulted in officer injury and property damage, there have been tactics used by some in the crowd that were similar to the ones used on July 25. On July 25th, 2020, individuals in the crowd used vehicles and bicyclists to re-direct traffic and law enforcement away from the demonstrations. These individuals tried to forcibly stop police vehicles and personnel from entering the area of the event. The group demonstrated, what appeared to be a high degree of coordination. Members used small radios, cellphones and mobile scouts around the periphery to identify police resources. As police units move, they were tracked by two to four similarly dressed people on bikes who appeared to be updating others in the event. As police move units, officers have observed the group appeared to respond and move at the direction of their scouts. This coordinated effort makes it very difficult for police to monitor events so they can respond and react to any developing safety issues. Often it is impossible for police to see the actions of the group or to identify those committing specific criminal acts. Often police will hear damage to property or receive calls for service indicating the group is committing crimes. Entering past these improvised mobile barriers creates confrontation and escalation exposing both officers and bystanders to violence. The potential for confrontation and the likelihood that entering the demonstration will result in physical resistance creates a substantial officer safety risk. The use of mobile barriers are but one form of action that limits or is intended to interdict the actions of police to hold people individually accountable for criminal acts. Members of the crowd on July 25, 2020 employed these tactics.

Brooks also claims that SPD found this image on social media prior to last Saturday’s incident, and the tactics shown by protesters last Saturday match the ones in the image. 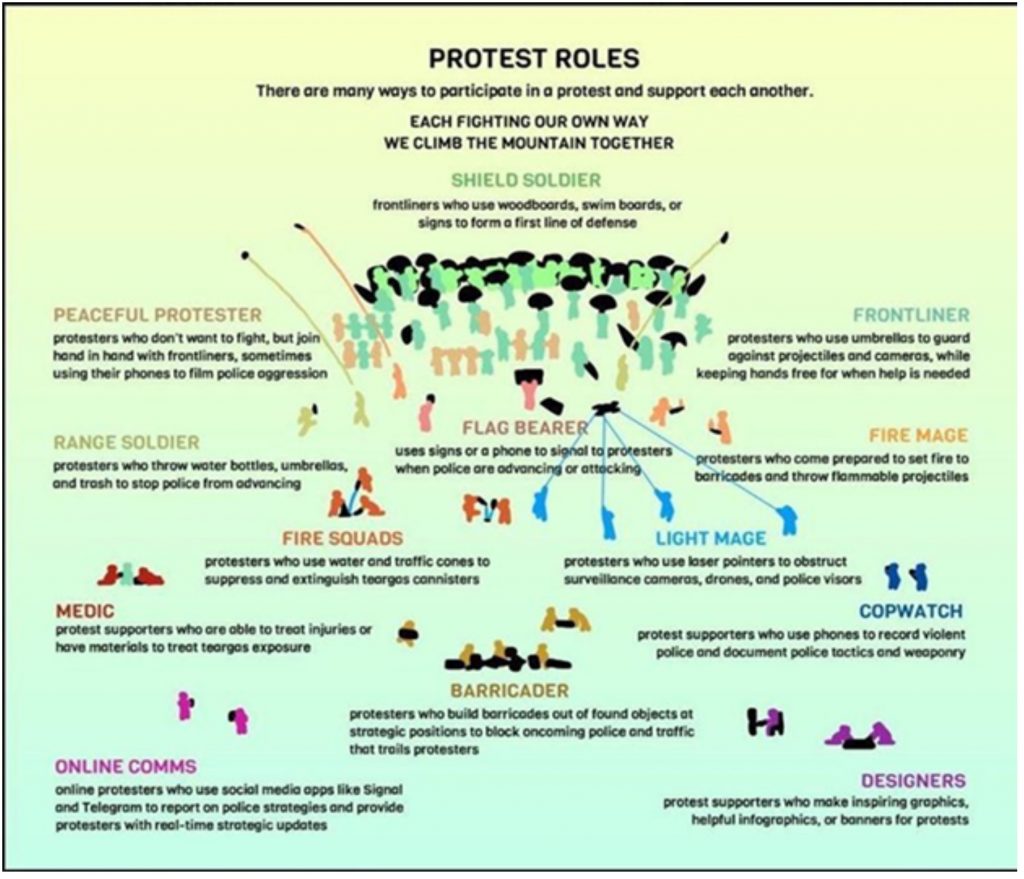 Brooks’ declaration gives an account of the events of last Saturday from his perspective, and makes for interesting reading.