It happened in a blink of an eye: the bill was brought to the floor and immediately passed, and the budget was done.

Just kidding. It was six hours of tedium. But there’s a rebalanced budget now — sort of. And more problems down the road.

This morning the Budget Committee met for the final time to take up the suite of bills that make up the 2020 budget rebalancing package, apply some final amendments, and vote the bills out of committee. And with the big arguments and decisions having taken place last week, this morning was mostly dedicated to tying up loose ends and giving speeches to honor the occasion and thank everyone who helped get it to the finish line. This afternoon the same Council members gave the rebalancing package a final vote of approval and a send-off with another round of speeches

The Council also passed a resolution authorizing this fall’s budget process to be for 2021 only, instead of the typical two-year budget developed in even years. The belief is that with COVID-19 and the ensuing economic meltdown, it is simply impossible to predict with any accuracy what either revenues or spending will look like two years from now.

And the Council passed a resolution expressing its intent to create a new, civilian-run Department of Community Safety and Violence Prevention that can serve as a home base for re-imagining how the city delivers on public safety without centering the police.

What notably failed to pass today is an amendment offered by Council member Sawant that would have prohibited SPD from assisting in the prosecution of anyone protesting in the George Floyd protests over the past two months. Last week it seemed that Council members’ issues with the draft amendment would get worked out, but apparently that was not to be; Sawant’s amendment failed today for lack of a second and so never even made it onto the table to be discussed.

On Wednesday a handful of additional budget-related bills will be approved at a special City Council meeting (by city law, bills may not be adopted by the Council on the same day they are introduced, so last-minute bills introduced today could be adopted tomorrow at the earliest).  Then the package goes to the Mayor for her signature — or veto.  After today’s vote, Mayor Durkan’s office released the following statement:

Mayor Durkan continues to have concerns with the City Council’s approach to cut Chief Best and her leadership team’s salaries and remove workers at the Human Services Department who are involved in outreach and engagement with people experiencing homelessness.

It is unfortunate Council has refused to engage in a collaborative process to work with the Mayor, Chief Best, and community members to develop a budget and policies that respond to community needs while accounting for – not just acknowledging – the significant labor and legal implications involved in transforming the Seattle Police Department.

This follows on a letter that Durkan sent to the Council yesterday, requesting that they address four complaints she had with the budget:

And if that weren’t enough, this morning the City Budget Office distributed a memo letting it be known that its most recent forecast predicts this year’s General Fund revenue shortfall to be about $25 million worse than the last gruesome estimate: a full $337 million off the budget adopted by the Council last fall. 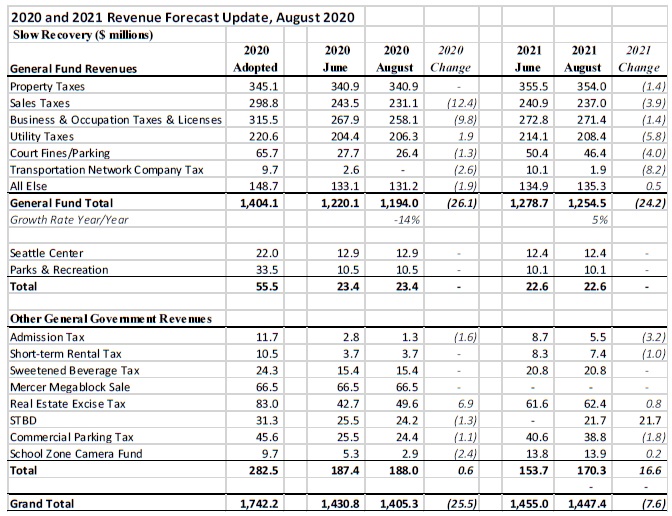 That will put the Council in a bind come Wednesday, when it looks to override the Mayor’s veto of its COVID-19 relief bill that withdrew $86 million from the city’s two reserve funds. According to the city’s budget director, the city will need to dip further into the “rainy day” fund to cover the increased revenue deficit, leaving even less for the Council to spend on new COVID-19 relief programs.