Today Mayor Durkan vetoed the heart of the City Council’s changes to the 2020 budget rebalancing package, while also announcing that she had reached a compromise deal with several Council members on a revised COVID-19 relief package that would deliver $45 million this year and next without fully draining the city’s reserve funds.

In a press release and press conference this afternoon, Durkan cited several items that led her to exercise her veto pen:

The veto notwithstanding, relations seem to be getting on a more promising track between the Mayor and the City Council. In her press release, the Mayor said:

“The Mayor and Mayor’s Office have been in active discussions with several Council offices regarding potential joint efforts to address Executive and Legislative priorities, and the veto allows all parties more time to reach consensus.”

In that spirit, Durkan along with Council members Gonzalez, Mosqueda and Morales also announced today that they had come to a deal on a compromise COVID-19 relief package to replace the one that the Mayor also recently vetoed (and the Council overruled, then immediately changed). The package would spend $45 million over 2020 and 2021 while leaving $50 million in the city’s reserve fund to offset the huge revenue shortfalls the city has seen and is expected to continue seeing next year. Here are the details on the proposed spending in that compromise package: 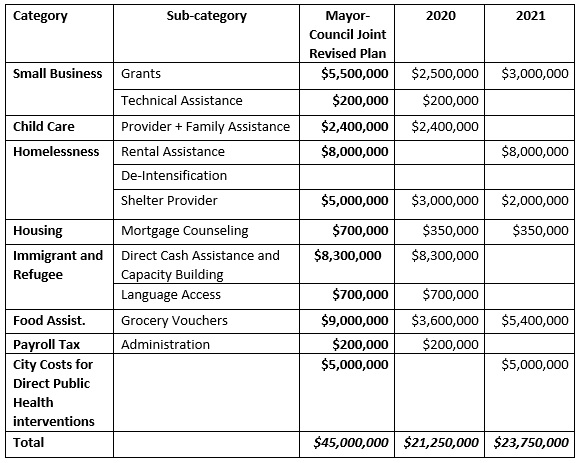 With the Mayor’s veto now a done deal, the Council has 30 days to vote to either sustain or override the veto — which means they also have 30 days to try to reach a compromise budget deal with the Mayor. The city is required to have a balanced budget, so the only two real options on the table are overriding the veto or reaching a new deal. And overriding the veto is the less attractive option, not only because of the political pressure on City Hall to put aside differences and make progress, but because the Council can’t actually force the Mayor to spend money that it appropriates. If they want to make cuts to SPD and actaully see the money moved to new community-led programs, they need the Mayor’s cooperation.

The City Council will be in recess for the next two weeks, so one can expect that this will be a top priority for them when they get back — and there will likely be a fair amount of behind-the-scenes diplomacy over the next two weeks as well.