Last week the City Council advanced out of committee two bills that would set up SDOT to launch a much-anticipated scooter-share pilot program in Seattle.

The scooter-share pilot has been in the works for some time. In May of 2019, Council members Mosqueda and O’Brien were publicly pushing for a program to go ahead, while Mayor Durkan was dragging her feet over issues of safety and indemnification. Last December, the city quietly issued a “determination of non-significance” (DNS) for a scooter-share program, for the first time going on the record for what a program might look like. The DNS was challenged, and in late spring the Hearing Examiner sided with the city and rejected the challenge. That cleared the path for SDOT to move ahead.

SDOT’s plan is to start with a “pilot” program that would eventually scale up. Initially, the department would permit up to three vendors, each providing between 500 and 2,000 scooters — yielding an aggregate fleet of 1,500 initially and 6,000 maximum across the city. It would permit three different types of vendors: one that would offer a mix of bikes and scooters; one that would offer only seated scooters, and one that would offer either standing scooters or a mix of seated and standing. In addition, at a later time in the pilot program SDOT might issue a fourth permit to a vendor for up to 1,000 new, prototype scooters to allow them to be tested. 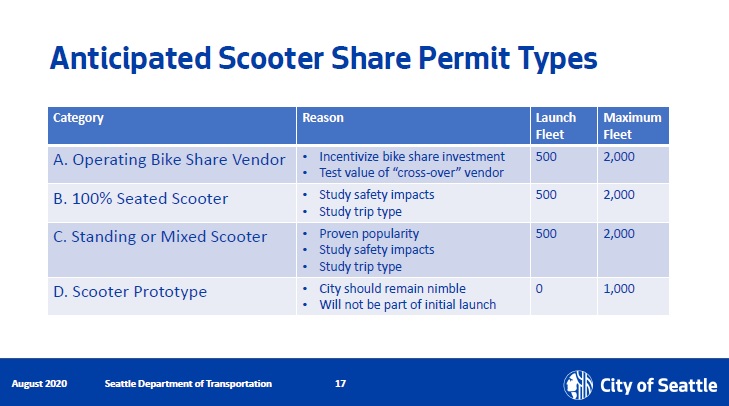 According to SDOT, the initial launch of 1,500 scooters puts Seattle at the low end of comparable cities, and the full 6,000 puts it at the high end when comparing density per square mile or per 1,000 residents.

There are, however, several issues that the city must address as part of the launch of the program:

Safety. As I have written before, there are serious concerns about the safety of scooters; a study published earlier this year leads to the conclusion that they can be at least as dangerous as cars, if not more so. Earlier this month, Dr. Frederick Rivara, a co-director of the Harborview Injury Prevention and Research Center sent a letter to SDOT and the City Council warning them of the dangers of scooters, and particularly the high rate of head injuries since so few people wear helmets when operating them. SDOT Director Sam Zimbabwe replied to Rivara, highlighting tactics that the city will be using to mitigate the safety risks.

Here are some of the ways the city plans to address scooter safety: 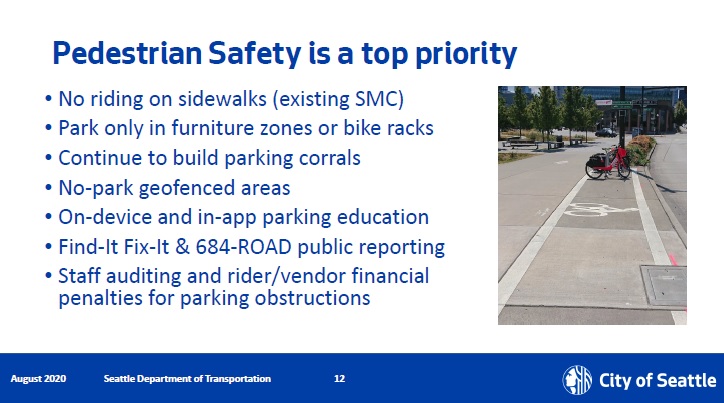 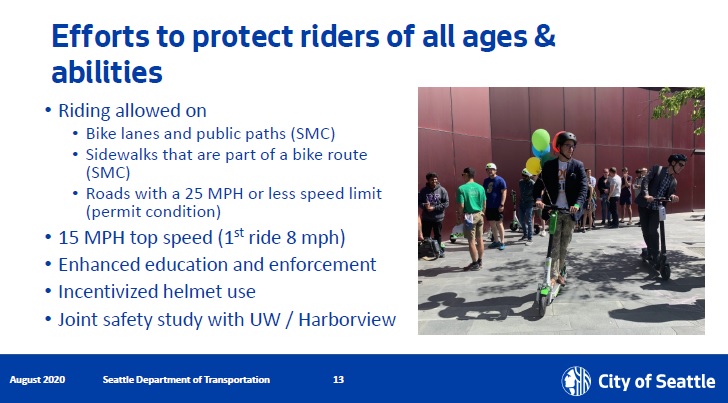 Of course, one of the issues is that not all the scooters in Seattle will be scooter-share; in fact, SDOT predicts that there will be more privately owned scooters than scooter-share-managed ones.  Another issue is that much of the city still doesn’t have bicycle infrastructure; Council member Morales particularly highlighted that issue for the south end of the city — though South Seattle is hardly alone.

Equity. As with other privately-managed infrastructure (such as high-speed Internet access), there is a tendency to create equity issues by favoring more affluent areas of the city when provisioning service. To address that, the city will be requiring vendors to stage at least 10% of their scooters in a designed “environmental justice community” area, which encompasses low-income areas of the city and roughly 10% of the overall area. Vendors will also be required to offer low-income plans that charge less than $1.50 per ride, and low-barrier plans to allow access to scooters for those without a smartphone and/or credit card or bank account. 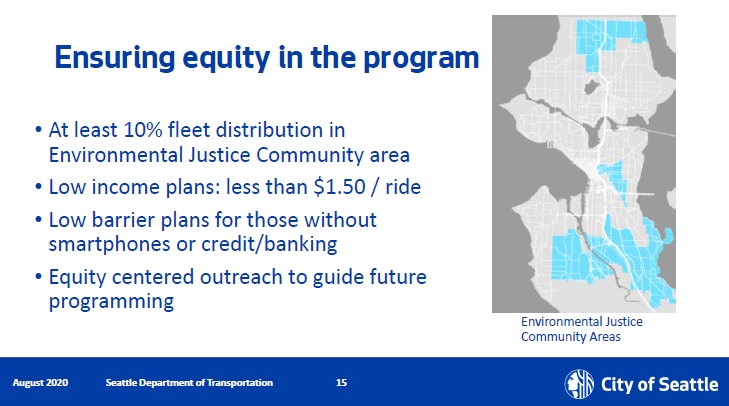 Council members raised issues with the “environmental justice community area” requirement, which had been included in a substantially similar form in the previous bike-share programs and was, in their view, not entirely effective in ensuring that bikes were available to low-income communities because vendors could concentrate vehicles in one small portion of the target area and leave the rest unserved. They suggested that SDOT should look at micro-allocation requirements to ensure that scooters are available in every community.

Parking. Mis-parked vehicles have been a perennial problem for free-floating bike-share programs and in the city’s community outreach is listed as one of the highest concerns for scooter-share as well. Under the pilot program, scooters may be parked in designated corrals and bike racks, as well as in the planting strips and “furniture zones” between the sidewalk and the curb. The city will also have the ability to geofence “no parking” zones in which scooters may not be dropped off, and vendors will be required to educate customers on the parking rules.

Last week, Council President Gonzalez suggested that SDOT address the parking problem by more aggressively building parking corrals and bike racks around the city, along with signage, to make it easier for riders to do the right thing. She encouraged them to look to Copenhagen as a guide for how to do it right. SDOT officials said that a quarter of the $1 million in anticipated permit fees the city will collect will be devoted to building out more parking areas for bikes and scooters; with an estimate of about $2000 for an on-street parking corral, that could add around 125 more around the city. In the past, former Council member O’Brien — an early advocate for scooter-share — argued for launching the program sooner because in his view the increased demand/need for bike lanes would force SDOT to fund them and build them out.

Seattle residents will also be able to report mis-parked scooters and bicycles through a phone number and the city’s Find-it-Fix-it app, and SDOT will be doing its own auditing and enforcement and issuing fines to the vendors for violation of the parking requirements in the permit (i.e. mis-parked scooters must be fixed within a certain time after a report).

COVID precautions. Vendors will be required to sanitize all the common touch-points on a scooter every time it is serviced (including nightly charging). In addition, the vans used by vendors to service and relocate scooters must be sanitized daily. Vendors’ staff and contractors must be educated on safe practices, and vendors will be required to implement any new COVID-19 requirements immediately upon request by the city. 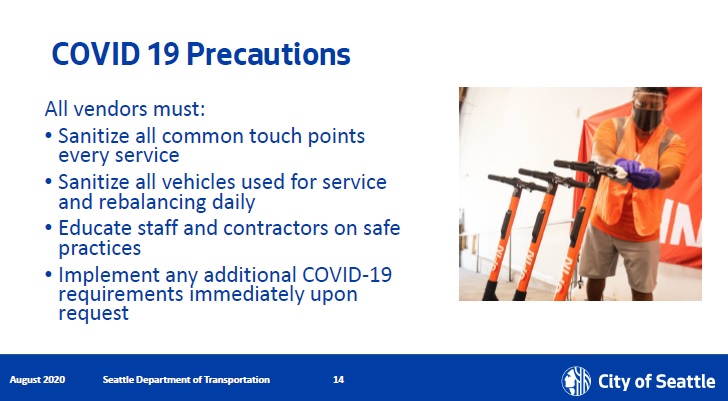 Enforcement.  While the permit includes some enforcement mechanisms, SDOT seems to be aiming for an approach that emphasizes the carrot over the stick. It is trying to prioritize education and incentive programs for both vendors and riders over fines and forced deactivation. That said, the city’s enforcement powers range from minor fees to reductions of a vendor’s allowed fleet size as well as outright revocation of a permit. Vendors are requirement to provide a substantial amount data to the city to allow SDOT to audit and verify compliance, as specified in the permit requirements.

Is it really a pilot program?  This is a question that came up several times in SDOT’s presentation to the Council last week. While officially the permits will need to be renewed annually, SDOT has not stated the length of the “pilot” stage, and none of the changes that the Council is required to make by ordinance in order to launch the program have an expiration date — so once authorized by the Council, SDOT could continue it indefinitely. While on one hand Council member Strauss, one of several advocates for scooter-share on the Council, argued that its time to move beyond an “academic conversation” and try it out for real, other Council members were somewhat unnerved by the number of times that SDOT officials responded to their questions with some form of “we’re going to work that out as we move forward” or “we plan to stay nimble.” The combination of a “pilot program” with no end-date and a plethora of issues still to be worked out leaves an unsettling feeling that SDOT is flying by the seat of its pants in rolling this out.

The Council moved two bills out of committee that are required for SDOT to move ahead.  The first updates the street code to allow scooters on bike paths, public paths, and road where the posted speed limit is 25 MPH or less. The second sets the permit fees for the scooter-share program; SDOT intends to charge $150 per vehicle annually. The two bills are expected to come up for final approval on Tuesday, September 8.