After this morning’s hour-long hearing, late this afternoon King County Superior Court Judge Jim Rogers certified four charges in a recall petition against Council member Sawant to be factually and legally sufficient to proceed to the signature-gathering phase of the recall effort.

As background, here is my article from earlier in the week previewing today’s hearing and ruling.

In his legal brief filed last Friday the petitioner, Ernest Lou, indicated that he was abandoning two of the six original charges, leaving four remaining ones asserting that she committed misfeasance, malfeasance and/or a violation of her oath of office when she:

The back-and-forth in the hearing didn’t cover much new territory, largely restating their arguments from Friday’s submitted briefs. The petitioner’s attorney, former U.S. Attorney for Western Washington John McKay (who now works for local law firm Davis Wright Tremaine) mostly hammered on the facts and evidence.  Sawant’s attorney, Dmitri Iglitzin, largely argued technicalities: that the original statement of charges wasn’t specific enough (and that supplemental briefs may not be used to supplement facts), that hiring and firing employees is a discretionary decision immune to recall attempts; that a ballot initiative isn’t a real ballot initiative until it’s actually been filed (so elected officials can apparently use public resources to promote them right up until the day they are filed); and that there was no official citation showing that City Hall was closed to the public. Iglitzin also pushed hard on the idea that the recall petition is a “political screed” against Sawant by her political opponents.

Judge Rogers flatly rejected all of Sawant’s defenses, finding all four charges factually and legally sufficient. He rejected the idea that the petitioner couldn’t file a brief to supplement the facts supporting the charges, citing case law indicating that it is allowed so long as the opposing party has sufficient opportunity to meaningfully respond (which Sawant had). Rogers also picked apart Iglitzin’s argument that the charges were too vague, pointing out that despite the fact that the petition didn’t list the specific incidents for the first two charges, both sides independently submitted evidence about the exact same incidents — indicating that they both knew what the charges were referring to.

Rogers also shredded Iglitzin’s argument that a “ballot proposition” isn’t real until it’s filed, disagreeing with his interpretation of the state law and pointing out that Seattle’s law is crystal clear on the point in that it covers “any measure, question, initiative, referendum, recall, or Charter amendment submitted to, or proposed for submission to, the voters of the City.” Rogers also rejected Iglitzin’s argument that even if Sawant’s use of public resources was illegal, it was so small as to be inconsequential; he pointed to the SCC Insight reporting from earlier this year in which a public records request on Sawant’s office found over $2000 of receipts related to spending on the Tax Amazon initiative.

More interestingly, Rogers criticized the dismissal by the Seattle Ethics and Elections Commission of a complaint related to the first charge: that Sawant had delegated decision-making to her political organization, Socialist Alternative. He specifically took issue with the reasoning by SEEC Executive Director Wayne Barnett in his written decision, calling it “not persuasive, to say the least.” 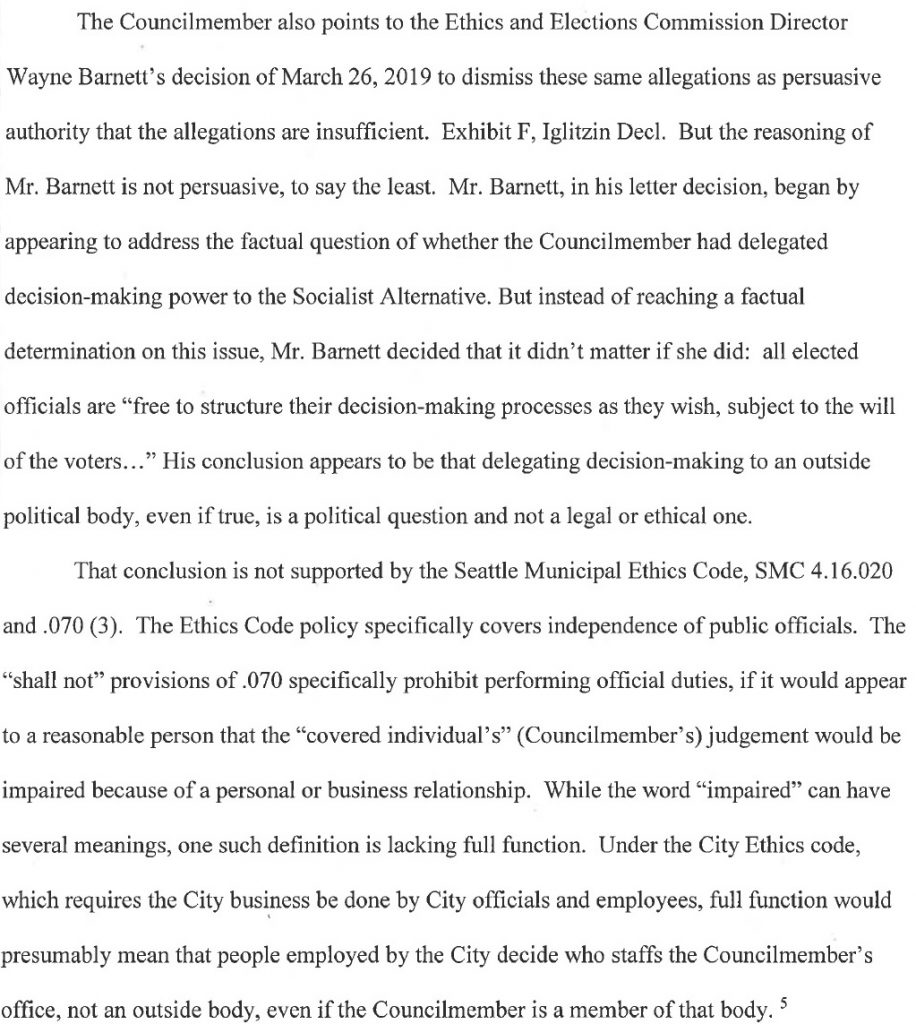 Much of the debate in the morning hearing was over the third charge: that Sawant violated the Governor’s COVID order when she used her personal passkey to let hundreds of protesters into City Hall for a protest/rally. Iglitzin argued that city officials bring guests in to City Hall regularly, even after hours and as mentioned above that there was no official order closing City Hall. But Rogers sided with the petitioner, finding that not only was the Governor’s order prohibiting gatherings in force at the time, but that Sawant knew that City Hall was closed to the public precisely because of the Governor’s order — establishing her intent to violate it. Sawant partially proved the case against her by retweeting others’ tweets of the rally/protest, the judge found.

The final charge, that Sawant led a protest march to Mayor Durkan’s home despite knowing that it is protected under the state address confidentiality program, was dealt with quickly by the judge. He didn’t attempt to determine whether the key assertions, that Sawant led the protest, knew Durkan’s address, and knew that it was confidential) were true — nor did he need to. He simply determined that evidence was presented that voters might conclude would be a basis for those conclusions, and that if they are true then they are violations legally sufficient for a recall.

With that, Judge Rogers certified all four charges for recall. But he has one more task that he left undone today, at the request of Sawant’s team: determining whether the ballot synopsis submitted by the King County Prosecuting Attorney needed any rewriting (beyond excising the two abandoned charges). Iglitzin requested 48 hours to consider and propose changes, and the judge granted that request, giving both parties until Friday at 4:30 to submit briefs.

Judge Rogers’ ruling today is likely not the final word: in a fiery speech to Socialist Alternative members earlier this evening, Sawant vowed to appeal the ruling, lashing out both at the petitioners and at the court. “The laws and courts and police under capitalism do not serve working people, people of color, those already marginalized under capitalism – they are made to hold us down,” Sawant said. She launched into a political screed of her own:

We should not be surprised that the courts would side with the racist police and system, rather than with this awakening movement. The ruling class is on the defensive. But they are empowering reaction. We saw how not only Trump, but a section of the mass media defended the murders in Kenosha. We see in Seattle how a section of the Democratic establishment, led up by Mayor Durkan, has gone to war against Black Lives Matter. And has joined this to the effort to try to drive out our socialist City Council office.

We will appeal this court ruling.

Just as the repeal of the 2018 big business tax was part of a broader right-wing, anti-homeless, big business offensive, this recall is part of an overall right wing reaction against black lives matter, and against social movements generally.

This recall attempt is also a huge attack against the proven principled leadership of our socialist City Council office, an elected office that has never bowed to the pressure from either big business and the billionaires or the pressure that comes from politics as usual, the pressure to get along with others at the top which implies selling out the working-class people and oppressed people our office stands with.

It is important that the City Council yesterday voted 7-1 in favor of supporting funding for our legal defense against the recall effort.

At the same time, those who get elected wanting to use their position to fight alongside the working class face the relentless pressure of respectability politics or civility politics.

So we need to keep building the pressure. And we need to begin to prepare the ground for our grassroots campaign.

As with the recall petition filed against Mayor Durkan, an appeal of today’s ruling would go directly to the state Supreme Court, which would likely hear it on an expedited schedule.