After a new inspection report indicated that the remaining south terrace of Pier 58 could spontaneously collapse, the city has closed the adjacent Pier 57.

Seattle Structural, a local design and inspection firm with a history of work on the waterfront, conducted the new inspection after the partial collapse of Pier 58’s north terrace on Sunday afternoon. It found that the south terrace of Pier 58, which is wedged between Pier 57 and the seawall, is prone to a spontaneous, vertical collapse similar to Sunday’s incident. But since it is more structurally integrated with Pier 57 than the North Terrace is with its surrounding structures, if it were to spontaneously collapse it would likely impart a “lateral” or sideways force onto Pier 57 and the electrical services that connect to Pier 57 where it adjoins the south terrace.

Piers are built to withstand strong vertical loads from the weight of the structures above, but only much smaller lateral loads from wind, waves and earthquakes. The lateral load from a collapse of the south terrace, according to Seattle Structural, “represents an imminent danger to the surrounding structures.” 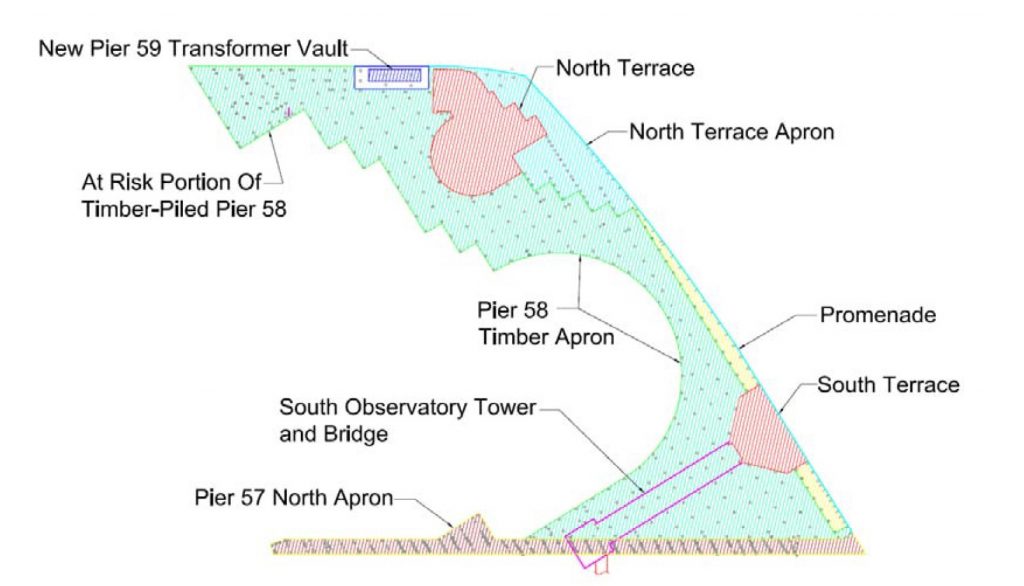 The original demolition plan for Pier 58 involved first removing the concrete area in the north terrace, as its support pilings had failed and it was pulling the pier away from the seawall. But now that the concrete area has collapsed, the priority is either to demolish the south terrace, or at least to remove the structural elements that would transmit lateral force onto Pier 57 if it were to collapse.

Pier 57, known as Miner’s Landing, is privately owned, and is home to the waterfront’s giant Ferris wheel. According to the city’s press release, the Department of Construction and Inspections has “red-tagged” Pier 57, “which will prevent access and operations on the pier until further notice.” The city maintains that they have found no damage to Pier 57, Pier 59, or the seawall as a result of Sunday’s partial collapse of the north terrace.

The city also says that in preparation for restarting demolition work it is re-installing monitoring systems and making other preparations, and it hopes to restart the work next week.

Here is the full text of the city’s press release:

PRESS RELEASE FROM CITY OF SEATTLE

SEATTLE (September 18, 2020) – Today, the Seattle Department of Construction and Inspections (SDCI) will close privately-owned Pier 57 (Miner’s Landing) due to its proximity to the failing Pier 58 structure and the potential for failure of the remaining structure. Public access and businesses on Pier 57 will be closed effective at 5 p.m. today.

“Our top priorities continue to be public safety, the safety of our construction team and protecting critical infrastructure,” said Marshall Foster, Director of Seattle’s Office of the Waterfront and Civic Projects. “We support SDCI in taking this necessary action and will continue to work with waterfront partners and businesses to both protect public safety and minimize impacts.”

An inspection was conducted by the City’s structural engineering consultant, Seattle Structural, following Sunday’s partial collapse at Pier 58. The results of the inspection found an increased failure risk exists from the remaining concrete structure at the south end of Pier 58, and the potential for resulting damage to Pier 57.

“We agree with the engineer’s assessment and believe this increased risk to public safety requires temporary closure of Pier 57 until the hazard is mitigated,” said Nathan Torgelson, Director of Seattle Department of Construction and Inspections. “Per the letter from the engineer, Pier 58 is structurally integrated with Pier 57 to the south. If a spontaneous collapse of Pier 58 were to occur, it could present an imminent hazard to the adjacent Pier 57. As a precaution, we have posted a red-tag on Pier 57 which will prevent access and operations on the pier until further notice.”

The City is currently re-installing monitoring systems and preparing for demolition work to begin once it is safe to do so; work is anticipated to re-start next week.  Pier 58 removal is still expected to be completed by early 2021, though the duration and sequence of the removal may change.