Two weeks ago the City Auditor released a report on vehicle bridge maintenance in Seattle. The report, which was commissioned by Council member Alex Pedersen following the closure of the West Seattle Bridge earlier this year, highlights a point SCC insight reported earlier this year: that SDOT’s bridge maintenance budget is only a fraction of the recommended amount. However, the Auditor cautions that before the Mayor and City Council try to increase the budget, SDOT needs to get its house in order to make sure that the money is well-spent and the work is done well.

Depending on how you count them, SDOT maintains a portfolio of either 77 or 51 bridges. For federal purposes, the count is 77; however, that separately counts any bridge component that spans over 20 feet — making the West Seattle Bridge seven separate bridges in the city’s portfolio. Factoring that out, there are 51 that you and I would call a “bridge.” But those are only a portion of SDOT’s “bridges and structures portfolio, which includes a variety of other human-engineered constructions that facilitate transportation. According to a 2018 SDOT report, the replacement value of the entire portfolio is about $8.6 billion; according to the City Auditor’s report, $3.4 billion of that is bridges over 60 years old.

The Federal Highway Administration (FHWA) maintains a federal register of bridges, and requires that they be inspected and their condition rated at a minimum every two years.  The bridges are rated on a nine-point scale for each of several components, and then those ratings are combined together to create an overall rating of “good,” fair,” or “poor.”

Of the city’s 77 “bridges,” only 22 are rated “good.” 50 are rated “fair,” and 5 are “poor.” Between 2010 and 2019 there has been a significant decline in the overall condition of the portfolio, with the number of “good” bridges shrinking and the number of “fair” bridges expanding. According to the audit report, six bridges improved and fifteen worsened.

Here’s another look at the map, this time showing bridge sizes and conditions. You’ll note that two of the city’s largest bridges, the Magnolia and University Bridges, are both in poor condition. 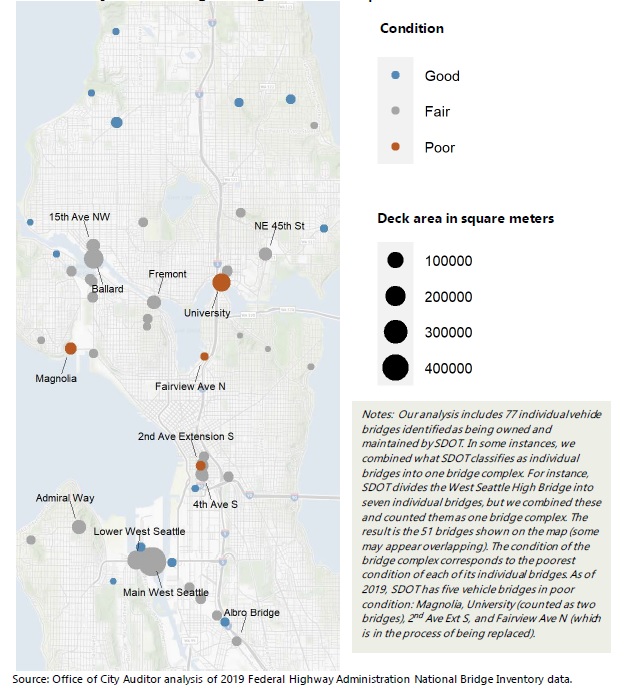 To provide some context, Seattle is not alone: across the country the condition of bridges and other transportation infrastructure has declined, and Seattle’s portfolio is similar to many other cities. Much of this can be attributed to the large transportation infrastructure investments made in the latter half of the twentieth century now feeling their age, and decreases in federal funding for maintenance — leaving states and cities on the hook. 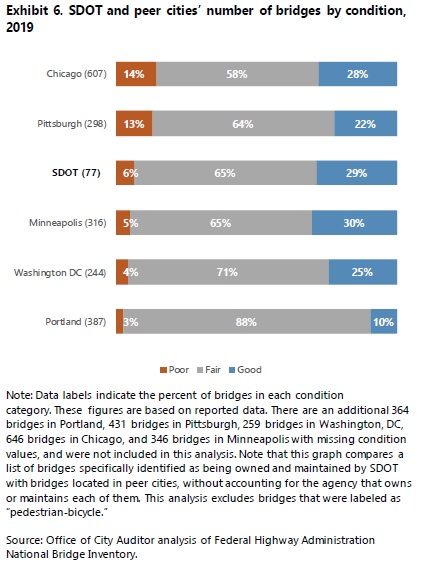 The general guideline in the industry for bridge maintenance suggests that somewhere between 1% and 3% of the replacement value of structures should be budgeted for annual maintenance. For Seattle’s entire portfolio of transportation bridges and structures, that would be about $86 million. For SDOT’s bridges older than 60 years alone, the figure would be $34 million per year. In contrast, the City Auditor found that SDOT spent on average $6.6 million per year between 2006 and 2019 — a tiny fraction of the recommended amount. SCC Insight has written about the deficit in bridge maintenance funding previously. 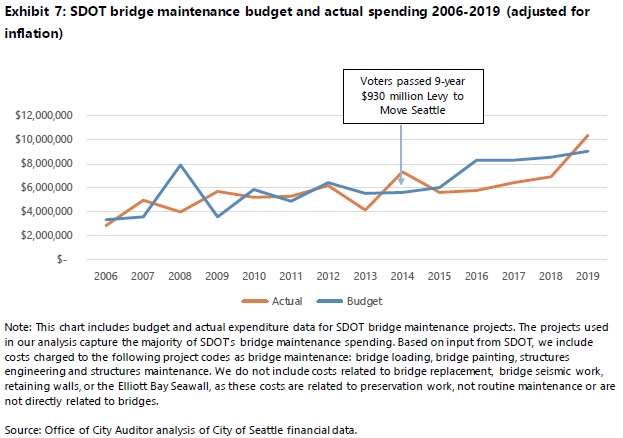 The year-to-year comparisons of budgeted amounts versus actual spending is a bit deceptive, as projects can be deferred or delayed for a number of reasons, including simply slipping out into the next year during the wet-weather months in Seattle when projects become more difficult. The auditor found that over the fourteen-year span, SDOT’s budget totaled $98.5 million and the department spent $91.5 million, with a faster ramp-up of budget in the past few years due to the passage of the Move Seattle levy.

Obviously the city is dramatically under-budgeting routine bridge maintenance, a problem for the City Council to fix since it holds the purse strings. But the audit report makes clear that before the budget goes up, SDOT needs to get its house in order to ensure that the money is used — and well-spent. And it seems the FHWA agrees: SDOT invited it in to do an informal review of its bridge maintenance practices last year, and it also recommended several things for SDOT to address. The stakes are high in whether SDOT manages to address FHWA’s feedback, because the department is due for a formal review in 2022 and if it does poorly it may become ineligible for federal funding.

Here are some things that the auditor and FHWA recommended that SDOT address:

Now that doesn’t mean SDOT is doing nothing to address the limitations of its current bridge maintenance efforts. Last year the department elevated its Roadway Structures Group to its own division, no longer buried deep in the organizational hierarchy. It hopes this will help to raise issues to the attention of senior management, including insufficient funding for maintenance.  They also expect that the change will lead to improved communication with city leaders about the needs of the bridge program.

In a written response attached to the audit report, SDOT officials acknowledge and concur with the auditor’s findings and recommendations, other than the recommendation to curtail reimbursable work done on behalf of other departments.

At some point down the line, once SDOT gets its act together, the Mayor and City Council will face a difficult challenge: finding sufficient funds for bridge maintenance work. Not only must they fund an effort to catch up with the substantial backlog of work (which led to over two-thirds of the bridges being rates fair or poor, but they must also fund 1-3% of the replacement value of the bridges every year in order to stay caught up. Given the city’s current budget crisis, the Mayor’s and Council’s focus on emergency relief and human services,  and the surprise extra cost of fixing or replacing the West Seattle Bridge, it’s unlikely that bridge maintenance will attract substantial new funding over the next two years. What happens after that will depend on how quickly the economy recovers (as well as city coffers), state and federal transportation funding availability, and whether SDOT can show that it has fixed its internal processes enough to built trust in its ability to spend tens of millions of dollars well.