This afternoon, Mayor Jenny Durkan officially released her budget proposal for next year. Let’s dive in to the details and see what’s in there.

The Mayor has articulated six priorities in her budget proposal:

But as the “rebalancing” exercise that just concluded demonstrated, this is a tough year for both revenues (which collapsed) and expenses (which exploded due to COVID, the economic meltdown, and the West Seattle Bridge shutdown — among other factors). The city is required to pass a balanced budget, which means that revenues constrain spending. And there’s the rub: when revenues are going down, it’s hard to make spending go up.

On top of that, the Mayor (and City Council) need to address the calls for a major downsizing of the police department.

And there are other nagging issues, such as the renewal of the Seattle Transit Benefit District on the November ballot, and the pending state Supreme Court ruling on Tim Eyman’s most recent effort to cut car tabs. Both of those have impacts on SDOT’s budget.

In most years, General Fund revenues (the kind of flexible-use dollars that elected officials can actually make decisions about how to spend) have progressed in a steady, unremarkable march upward. And if you simply look at the bottom line in the Mayor’s 2021 budget proposal, that trend hasn’t changed much: revenues are up about $14 million over the original 2020 pre-COVID budget, now just shy of $1.5 billion. Given everything that’s happening, it’s surprising to say the least that General Fund revenues are up.

But underneath the covers, a lot has changed. Most of the major revenue streams that contribute to the General Fund have dropped in 2020, and few are expected to recover quickly in 2021. Property taxes are the notable exception in that they have stayed strong, but sales taxes are expected to be about $62 million off from the original 2020 budget; B&O taxes will be $40 million down; utilities taxes will drop $11 million; and paid parking will be off by $15 million.

But the flip side is that the Council passed a new payroll tax (and overrode the Mayor’s veto) that is currently projected to bring in $214 million next year. The Council approved a spending plan resolution laying out its preferences for how that money should be spent in 2021, including:

In the graph below, you can see the effect of the COVID recession on overall general fund revenues, and how the payroll tax (in dark blue) neatly filled that gap:

In past years, there were four revenue sources that provided more than 70% of the General Fund revenues: property taxes, sales taxes, utility taxes, and B&O taxes. Now with the addition of the payroll tax, it’s become the “big five” sources, and collectively they represent 79% of General Fund revenues. 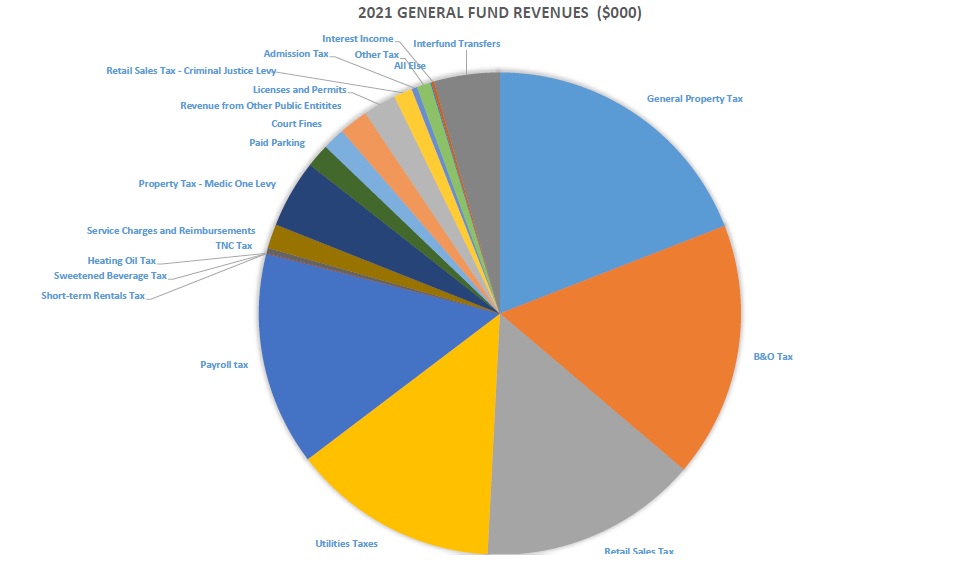 Here’s one more look at the historical trend for various revenue sources, that once again makes clear how dominant the “big five” revenue source are — and how vulnerable the city is to fluctuations in those five. Property taxes and utilities taxes are stable; B&O and sales taxes took a big hit. Changes in most of the other revenue sources are rounding errors in comparison.

There are about thirty departments in Seattle city government, but the ten largest ones represent 82.9% of the city’s expenditures. We could spend a lot of time digging through the finances of the other twenty (which do important work), but the numbers are so small for most of them that the return on our time investment largely isn’t worth it if we’re trying to understand where the money goes.

In fact, half of the spending is in two departments: Seattle City Light and Seattle Public Utilities, both of which largely run as separate businesses (the city can’t siphon off their business revenues for other city purposes). 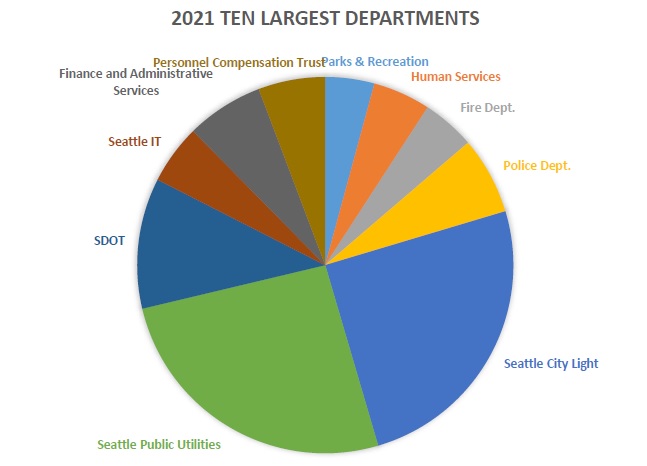 Looking across the “top ten” departments, it’s difficult to see a lot of austerity budgeting; the city seems to be managing to sustain spending in most areas, with the notable exception of SDOT — though compared to 2019 and earlier, it still looks robust.

Of course, all the attention is on the police department funding. On paper, SPD will be taking a 12.1% cut of almost $50 million and reduce headcount by 334 positions.

The Mayor has proposed moving four units out of the department. The 911 Call Center and Emergency Operations Management will be spun out into a new department: the Seattle Emergency Communications Center.  The parking enforcement unit will be transferred over to SDOT, and SPD’s victim advocates group will move to HSD.  Here’s what budget and headcount look like for those four teams: 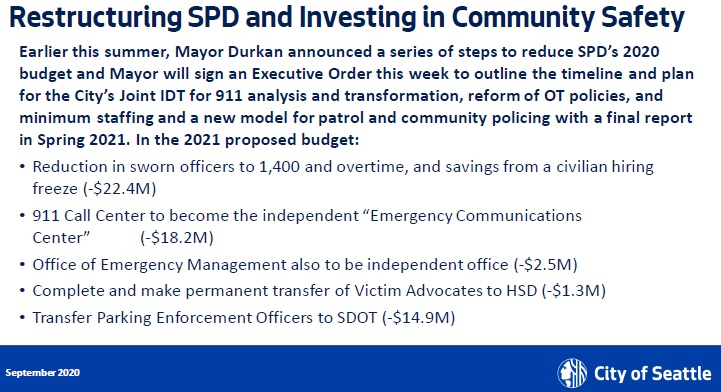 In total, these four groups represent $36.4 million and 285 headcount.  So outside of those transfers, SPD’s budget and headcount will be reduced $12.45 million and 49 headcount. If you’re of the mindset that transferring groups out of SPD is a good start with shrinking and transforming SPD, then you probably like this a lot. But it still falls far short of the 50% cut that advocates continue to push for, and that many Council members verbally committed to. 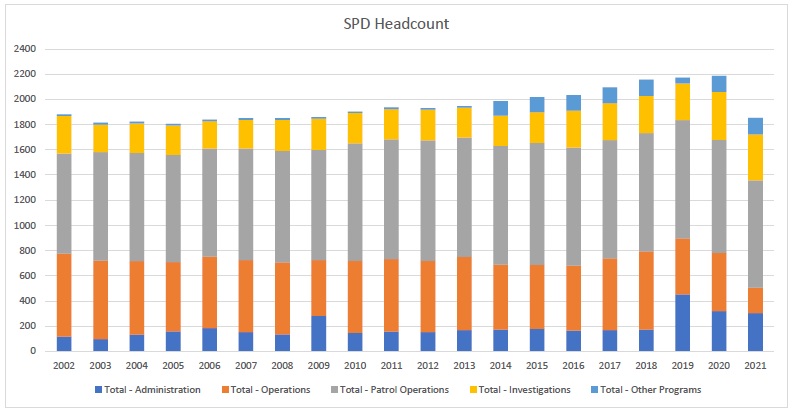 I reran the numbers for my deep-dive on SPD’s budget from June. It’s difficult to do a historical comparison when four groups are being spun out, but a few other things did pop out as interesting notes.

First, the employees of the four groups transferring out of SPD represent some of the lower-paid employees in SPD, so the department’s budget per employee actually went up with this change.

The transfers out and other headcount reductions are mainly in operations and administrative overhead groups. Patrol operations is cut by 48 positions, but half of that is in the administrative group; another 14 are cut from the Southwest Precinct, and the remaining ten are scattered across the other four precincts.

Cuts to the investigations unit are minor. 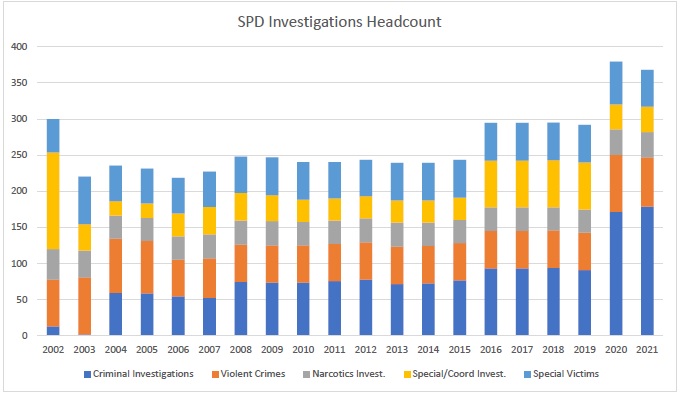 In short: if you want to see big cuts in SPD’s sworn officers, this is not the budget proposal you are hoping for.

So with no drastic cuts to any departments, how did the City Budget Office balance the budget?  Through a combination of actions:

The Mayor also left open some other questions. She will be asking the task force she is convening to recommend new sources of revenue to sustain the one-time $100 million investment in BIPOC communities into future years. In a press briefing this morning, she also made clear that she believes that Seattle should have a city-specific income tax (including the possibility of a flat income tax, part of which is used to reduce other, more regressive taxes), and that the payroll tax should be regional, not Seattle-specific, to avoid creating incentives for companies to shuffle employees between cities to avoid paying the tax. 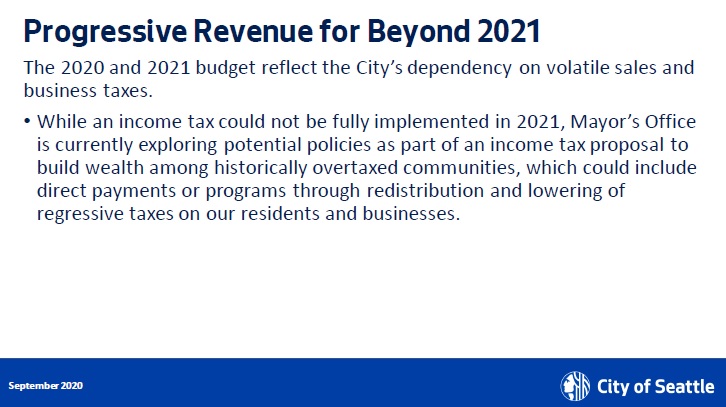 How will the City Council react to the Mayor’s budget? There are parts that many of them will like, including the absence of “austerity budgeting” in many departments. But they may not be happy about the redirection of payroll tax revenues to support General Fund spending.

The Council will also likely push for many of its own priorities as it goes about editing the Mayor’s proposal. Things sure to be at the top of their list: