Buried on page 13 of today’s Washington State Supreme Court ruling invalidating Initiative 976 is a lengthy footnote. It does something very unusual for a footnote: it explicitly overturns a 1960 ruling by the Court, in an attempt to make amends for an incredibly racist opinion that has sat on the books for sixty years. 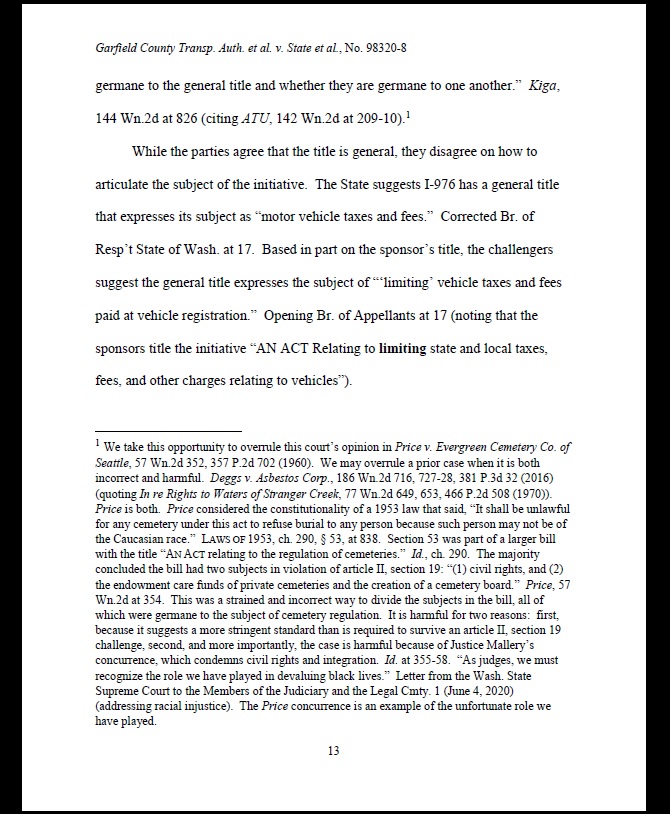 The 1960 case in question is Price vs. Evergreen Cemetery Co. of Seattle. In that case, Mr. and Mrs. Price inquired with the cemetery company about having their deceased infant buried in a section of its cemetery set aside for infants, known as “Babyland.”  They were informed that the company’s rules restricted Babyland to Caucasian infants. Mr. and Mrs. Price sued, alleging that the cemetery violated a state law (at the time RCW 68.05.260) that read “It shall be unlawful under this act to refuse burial to any person because such person may not be of the Caucasian race.”  The cemetery argued that the law was unconstitutionally enacted because it was part of a bill that contained multiple subjects: civil rights, and “the endowment care funds of private cemeteries and the creation of a cemetery board.” The Court agreed and invalidated the law, allowing Evergreen and other cemeteries to continue a practice of racial discrimination. But the truly offensive part is the concurring opinion by Justice Mallery, an unhinged screed against civil rights for Black people. I won’t do it the favor of quoting it here, but if you are so inclined you can find it at the link to the case above.

Up until today, that ruling was still the law in Washington State. But with its footnote, the state Supreme Court wiped it off the books, declaring it technically incorrect with current jurisprudence on whether a bill contains multiple subjects (the heart of today’s ruling on I-976), but also harmful because of Mallery’s concurrence. Here is the footnote in full:

We take this opportunity to overrule this court’s opinion in Price v. Evergreen Cemetery Co. of Seattle, 57 Wn.2d 352, 357 P.2d 702 (1960). We may overrule a prior case when it is both incorrect and harmful. Deggs v. Asbestos Corp., 186 Wn.2d 716, 727-28, 381 P.3d 32 (2016) (quoting In re Rights to Waters of Stranger Creek, 77 Wn.2d 649, 653, 466 P.2d 508 (1970)). Price is both. Price considered the constitutionality of a 1953 law that said, “It shall be unlawful for any cemetery under this act to refuse burial to any person because such person may not be of the Caucasian race.” LAWS OF 1953, ch. 290, § 53, at 838. Section 53 was part of a larger bill with the title “AN ACT relating to the regulation of cemeteries.” Id., ch. 290. The majority concluded the bill had two subjects in violation of article II, section 19: “(1) civil rights, and (2) the endowment care funds of private cemeteries and the creation of a cemetery board.” Price, 57 Wn.2d at 354. This was a strained and incorrect way to divide the subjects in the bill, all of which were germane to the subject of cemetery regulation. It is harmful for two reasons: first, because it suggests a more stringent standard than is required to survive an article II, section 19 challenge, second, and more importantly, the case is harmful because of Justice Mallery’s concurrence, which condemns civil rights and integration. Id. at 355-58. “As judges, we must recognize the role we have played in devaluing black lives.” Letter from the Wash. State Supreme Court to the Members of the Judiciary and the Legal Cmty. 1 (June 4, 2020) (addressing racial injustice). The Price concurrence is an example of the unfortunate role we have played.

The footnote refers to a recent letter from the Court to the state’s legal community, in which the justices say, “We must remember that even the most venerable precedent must be struck down when it is incorrect and harmful. The systemic oppression of black Americans is not merely incorrect and harmful; it is shameful and deadly.”

A footnote to the footnote: in 1987 the state cemetery regulations were reorganized, and RCW 68.05.260 was moved to RCW 68.50.035. It’s currently still marked as unconstitutional (as of this writing it’s only been four hours since the ruling came out), but we can look forward to that being revised in the very near future.