As the legal proceedings in the effort to recall District 3 City Council member Sawant begin to wind down, the election campaigns — both for and against recall — are spinning up. Over the last two months the “Recall Sawant” campaign and the “Kshama Solidarity” campaign have both formally organized, filed their paperwork, and begun furious fundraising. While there are many similarities between the two sides of the recall — including their use of mailchimp to send out regular missives demonizing their opponent while pleading for money (Recall Sawant, Kshama Solidarity) — their campaign finance filings reveal some stark differences between the two operations.

Here’s a quick snapshot of the most pertinent details, as of 10/31.

Both campaigns have raised large sums of money, and both are already burning through their war chests. For the Recall Sawant campaign, they have one massive expense: legal representation as they continue to litigate the recall petition. To-date they have paid their law firm, David Wright Tremaine, $55,000 and they have an accounts payable accrual of $17,167 on top of that. In this respect, Sawant has a huge advantage: the city is footing her legal bill to defend against the recall petition, with the City Council’s approval. This has saved them tens of thousands of dollars already.

On the flip side, while the Recall Sawant campaign is largely run by volunteers, the Kshama Solidarity campaign has nine people part-time on its payroll. Interestingly, of those nine (all of whom seem to have some form of affiliation with Socialist Alternative), three also worked on the Tax Amazon ballot initiative earlier this year, and five (including those three) worked on Sawant’s re-election campaign last year. One of those three is Calvin Priest, Sawant’s husband: Priest was drawing about $2,100 per month on the Tax Amazon campaign as recently as August, and then mid-September switched over to the Kshama Solidarity Campaign where in his first six weeks he was paid over $3,500.  The positive spin on this is that Socialist Alternative has decided that it likes to have experienced campaign workers at the heart of its political campaigns and has chosen to spend its campaign dollars on that; the negative spin is that political campaigns, successful or not, have become a jobs program for the benefit of Socialist Alternative members — and especially for Priest (and Sawant’s household). It wouldn’t be surprising if Socialist Alternative takes a page from Tim Eyman’s playbook and always has some form of active election campaign from this point on, so long as their fundraising machine can sustain it.

Both campaigns seem to have attracted a stable of active volunteers willing to “table” and to spread signs and campaign literature around District 3. Assuming the recall petition survives the pending appeal, we will see whether the recall campaign relies on volunteers for signature gathering or decides to spend on paid signature-gatherers, since they will be under intense time pressure to try to make the February 26th filing deadline for the April 2021 election.

On the fundraising side, there are again clear differences between the two campaigns. The Recall Sawant campaign has almost three times the number of contributors as the Kshama Solidarity campaign, with much smaller contribution sizes. In the early days of the recall campaign, it proactively solicited donations of $25 or less because it is not required to publish the donor’s name when the contribution is that small. It seems to have moved beyond that point, though still well over a third of its donations are $25 or less and only three are at the maximum allowed amount ($1000). 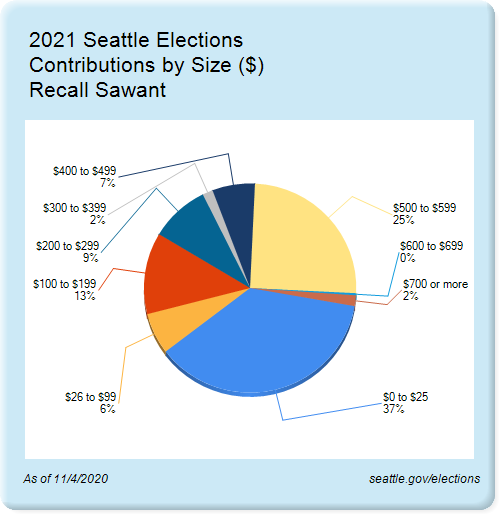 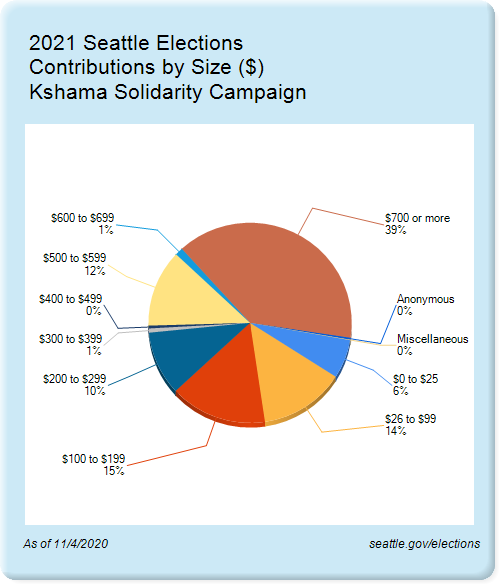 The pattern of where its donations are coming from is familiar, with 50% coming from outside of Seattle (though both campaigns have only raised 22% of their contributions from within District 3). 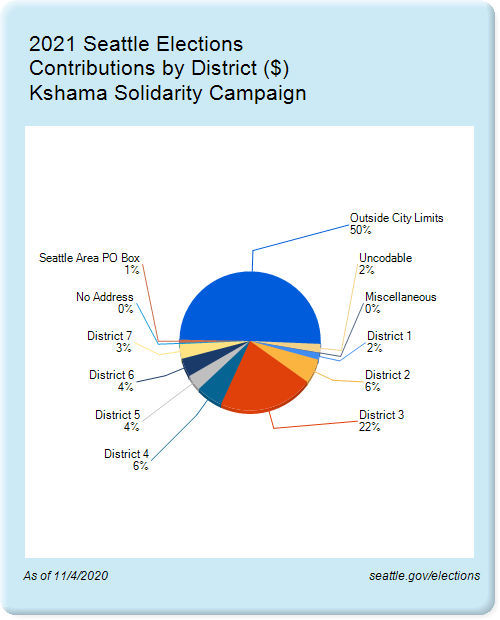 The recall campaign’s true geographical distribution is unknown, since so much of it is small, anonymous donations. 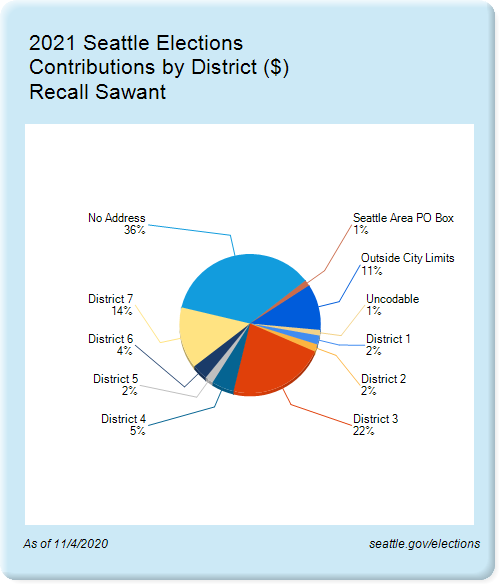 A clear take-away from the data is that Socialist Alternative is using the same playbook for this campaign as it used on the Tax Amazon ballot initiative and on Sawant’s re-election campaign last year: hiring many of the same people, fundraising from the same pool of prospective donors (including Socialist Alternative members in other areas of the country), and campaigning with the same tactics (tabling, signs, emails). In case you need further convincing, here are are a couple of charts that look eerily familiar: 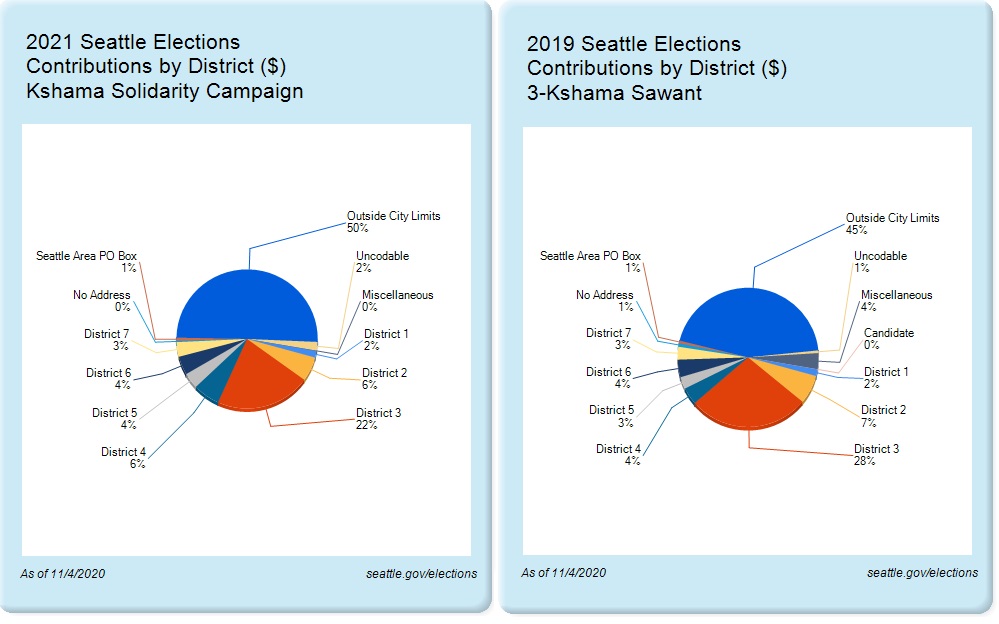 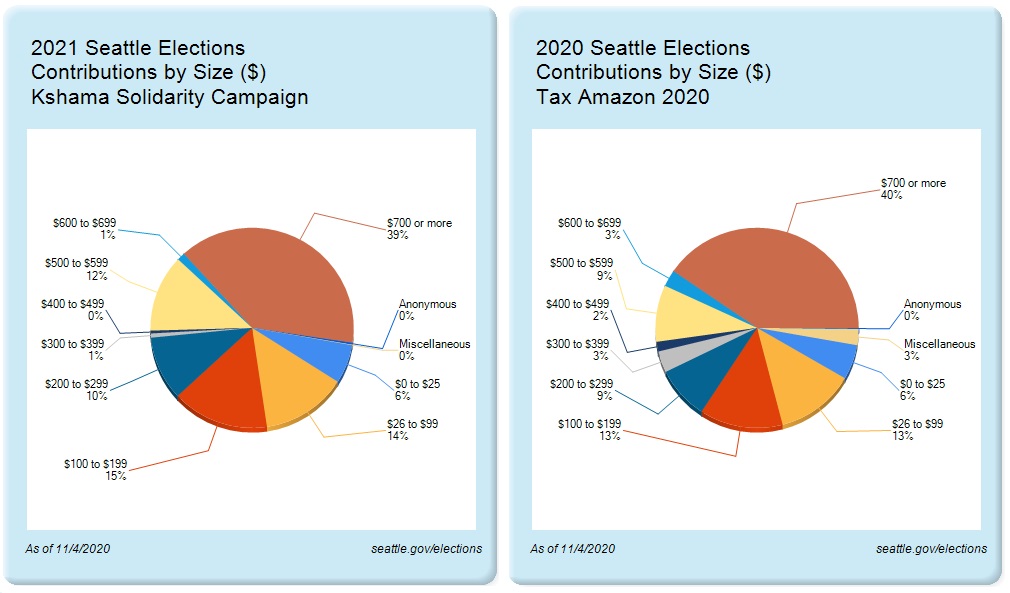 The big question, of course, is whether the playbook will work again. So far, not only are they are being out-fundraised, but the recall campaign’s fundraising looks far more “grassroots” than theirs does. On the other hand, the battle is on Sawant’s home turf, and her team won’t be learning on the job how to run an election campaign.

If the state Supreme Court upholds the certification of the recall petition in early January — far from a sure thing — look for both sides to immediately kick their campaigns into high gear.