This morning Mayor Durkan announced that the city will move forward with repairing the cracked main span of the West Seattle Bridge, with the expectation that it will reopen by mid-2022, restore the bridge to its original expected lifetime, and push out building a replacement for up to 40 years. However, she also said that SDOT will start studying an eventual replacement strategy now, and it will approach Sound Transit about jointly building a third span to West Seattle that could incorporate light rail, bicycles and pedestrians.

In a media briefing yesterday, Durkan and SDOT Director Sam Zimbabwe said that the decision had been narrowed two two alternatives: repairing the cracked span, or a “rapid replacement” concept proposed after the city’s cost-benefit analysis study was largely complete. The rapid replacement option proposes that replacement spans would be assembled elsewhere while the current bridge’s main span was demolished, and then the new spans would be barged in and lifted into place — a process that could potentially have the bridge reopened as soon as 2023 with a new 75-year lifetime. 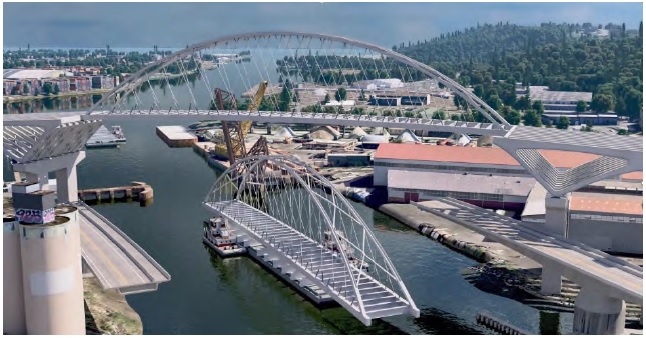 Community feedback, including from the Community Task Force that Durkan convened, was evenly split between the two options. But according to Durkan and Zimbabwe, as they dug into the details the rapid replacement option looked less attractive, largely for issues unrelated to the novel construction method.

One big issue was funding: a replacement would cost an estimated $391 million to $522 million, more than the city could self-fund, so it would need to pass the hat in Olympia and Washington D.C. The state government is dealing with many of the same financial pressures as the city, and with the upcoming transition to the Biden administration next year, Durkan’s call to the state’s congressional delegation and leaders in the House led her to understand that the next federal infrastructure bill likely won’t be brought forward until late in 2021, significantly delaying the city’s ability to secure federal funding. Durkan was also clear that the city would not begin demolition of the existing damaged span until the necessary funding was secured, diluting much of the value of “rapid replacement” through simultaneous demolition and construction.

Another issue that affects timing is the permitting process. While even repairing the bridge requires permits, those are much simpler than what is required for a replacement project — especially since the West Seattle Bridge site intersects with a federal waterway, a salmon spawning river, a Superfund site, and tribal lands (all on top of state SEPA requirements).  SDOT provided some comparisons with the permitting and consultation requirements for other city projects; they paint a clear picture of years of potential delays, making a “rapid replacement” option far less rapid. 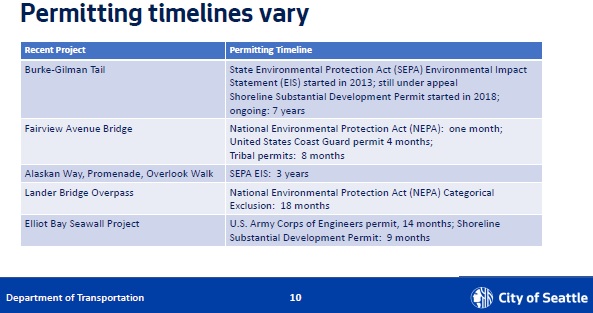 Between the financing and the potential for long delays, Durkan (with SDOT’s support) concluded that repair was the best option to move forward in order to expedite re-establishing mobility to West Seattle and the Port. This was bolstered by the positive results to-date in the stabilization effort, which is not yet complete but according to Zimbabwe is performing to expectations. Durkan was clear that the speed in which mobility between West Seattle and downtown could be restored was a priority factor in her decision, both to relieve the impacts on the affected communities and to ensure that the city is well-positioned for economic recovery post-COVID. 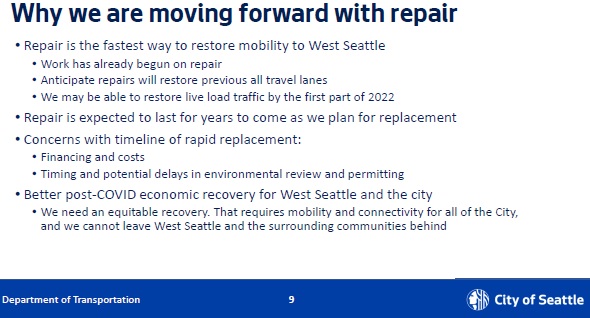 Durkan also noted that neither the repair nor the replace option would accommodate the addition of light rail on the bridge, since the constraint is not only the main span but also the approaches on both sides. Instead, she intends to approach Sound Transit about jointly adding a third span across the Duwamish to West Seattle that would support light rail, bicycles, and pedestrians. That seems like a tricky endeavor: making either a “high bridge” that would work for bicycles and pedestrians, or a lower draw bridge. But Durkan was insistent, saying, “It makes no sense to build a bridge that only does one thing.”

The Mayor also said that SDOT will begin studying the eventual replacement for the repaired bridge, with a “type, size and location” study to assess requirements and options. Those options could potentially include a tunnel under the river, according to SDOT.

Zimbabwe stated that the current stabilization work is on track and scheduled to wrap up in early 2021. That work involves adding an additional set of steel tendons inside the bridge, “post-tensioned” to hold the cracked area of the main span together to prevent further structural cracking.

From there, the full repair work will involve adding more post-tensioned tendons to adjacent lower spans and across the full width of the main span, anchored together at the bridge piers.

SDOT said that it is also reviewing the seismic condition of Pier 18 (the pier with the stuck lateral bearing that was fixed earlier this month), and is completing a study on the need for future repairs of other parts of the bridge as it enters the second half of its originally-expected 75-year life. Design, permitting and construction planning for the full repair begins now and is expected to continue into next summer, followed by construction work starting next fall and extending into early 2022. If all goes well, the bridge will be back open to traffic in mid 2022, without any lane reductions, though SDOT held out the hope (but didn’t promise) that a subset of the lanes might be able to open earlier than that. 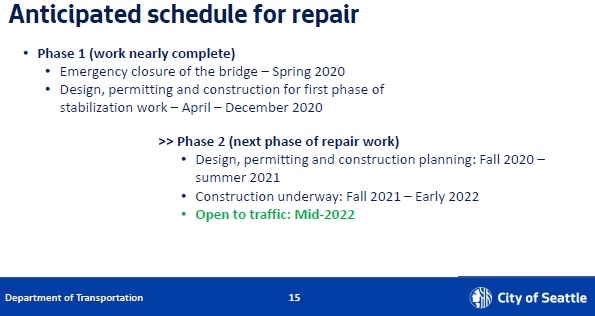 SDOT acknowledged that risks still remain with the repair option. Officially the repair is expected to last for “15 to 40 years,” but according to Zimbabwe the department’s tests so far and the encouraging results of the stabilization work is steadily increasing their faith that the repair work will restore the broken part of the bridge to its original full lifetime of 75 years (about 40 more from now).  But questions remain about what will happen to the rest of the bridge as it ages into the second half of its life: whether similar problems will emerge elsewhere, or whether other problems, potentially exacerbated by the cracking issues, will be discovered. Staying ahead of such issues is why SDOT has doubled its estimate of the annual maintenance costs of the repaired bridge, assuming that it will need a thorough inspection (inside and out) twice a year, that the new tendons will add to the maintenance checklist, and that installing and managing an electronic monitoring system for the bridge’s structural components will add costs.

Other notes of interest: