It’s been a whirlwind two days in court, as one of the individuals living in an encampment in Cal Anderson Park attempted to convince a federal judge to issue a temporary restraining order to stop the city from clearing out the park. It ended late this afternoon when the judge firmly denied the request.

On Monday morning, the Parks Department posted notices around the growing homeless encampment in Cal Anderson Park that the city had deemed the site to be hazardous and intended to clear it all 48 hours later. According to the city, this followed several days of outreach to the residents in which “virtually everyone” was offered alternative shelter, and several individuals accepted. Over the next two days, activists and residents barricaded themselves in to make it more difficult for the city to get in and remove them. 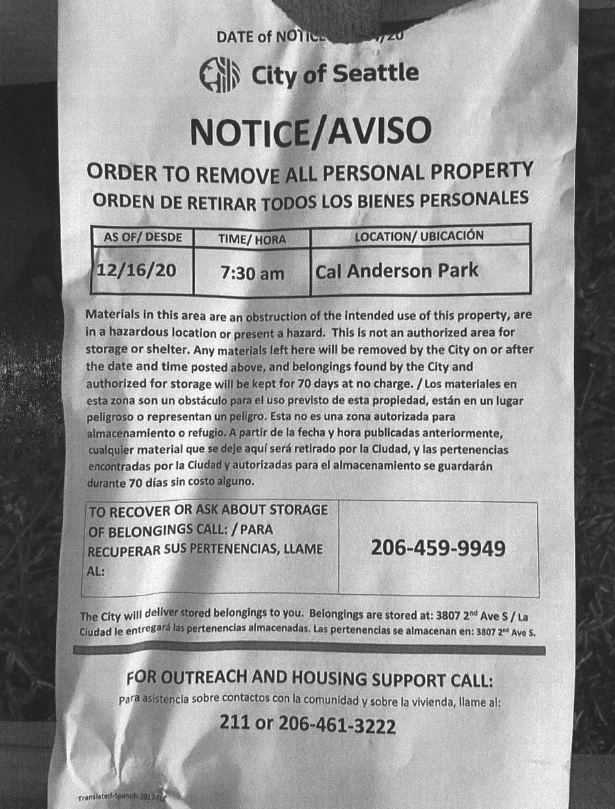 Wednesday morning was a standoff as Parks Department staff, supported by police, gathered at the edges of the park to begin the effort but chose not to start what would probably have ended as a violent confrontation.  But as that was playing out, one of the encampment residents, Ada Yeager, was filing a lawsuit against the city in U.S. District Court, asking for an emergency temporary restraining order to prevent the city from proceeding with the removal (which is expected to take about 48 hours to complete).

However, Yeager’s attorney failed to officially serve the city with a copy of the lawsuit (which puts it on notice that it is being sued and must appear in court). In fact, the city’s attorneys first found out about the lawsuit on Twitter, when Crosscut reporter David Kroman tweeted out an excerpt from the complaint.

The case was assigned to Judge Richard Jones, the same judge who is hearing the ACLU/Black Lives Matter lawsuit over SPD’s use of crowd-control weapons, and who found the city in contempt last week. Jones scheduled an emergency hearing for 3:30 yesterday afternoon. By the start of the hearing, the city had still not been officially served, the city had not yet been able to write and submit a written response, and the lawyers for Yeager and the city had not even directly communicated with each other yet. All this was made clear to Jones at the beginning of the hearing, and yet with the grumbling assent of the city’s attorneys, they proceeded with the hearing in lieu of written briefs given the time pressures.

The complaint, as submitted, is peculiar in many ways. First, it refers to Yeager’s tent as a “protest encampment,” in order to assert both the First Amendment protections afforded to free-speech activities, as well as the constitutional protections given to homeless individuals under recent case precedents such as Martin vs. Boise. That is, as judges would diplomatically say, a “novel legal theory.” Along those lines, it claims that by removing Yeager and her encampment from the park, the city would be violating her rights under the First Amendment (protected speech and assembly), Fourth Amendment (unreasonable search and seizure), Fifth Amendment (taking of property without compensation and due process), and Fourteenth Amendment (state prohibitions). It makes many claims, including some highly speculative ones such as that Mayor Durkan is pressing for the cleanup of Cal Anderson Park because she has ambitions to take a role in the Biden Administration. What it doesn’t do is provide much evidence to support those claims.

In order to obtain a temporary restraining order (TRO), a plaintiff needs to meet every part of a four-part test:

In cases such as this one, a violation of the plaintiff’s civil rights is assumed to be a form of irreparable harm that couldn’t otherwise be compensated for through awarding monetary or other forms of damages. Also, when a plaintiff is suing the government, the “balance of harms” and “public interest” parts usually merge into a single question.

About halfway through the two-hour hearing, it apparently became clear to Judge Jones that despite the urging from both parties that he issue a ruling immediately from the bench, he would not do so. Instead, he needed to do further research on the relevant case law to inform his ruling. But without a TRO the city could move ahead with the encampment removal at any time, and the city would not give ground on its desire to do so “imminently” given the public safety hazards that it said the encampment represented. But given that (due to the earlier procedural screw-ups) the two parties had not conferred in advance, there was no agreement on maintaining the status quo if Jones ended the hearing without ruling. To try to facilitate some kind of arrangement, the judge recessed for about twenty minutes in the middle of the hearing so the parties could confer. But it was to no avail; they came back just as entrenched in their positions. So after listening patiently to both sides, Judge Jones ended the hearing and said that he would likely issue his ruling in the morning. The plaintiff’s attorney momentarily lost his composure as he realized that the city was still free to proceed with the removal, and nearly said something inappropriate to the judge, but he caught himself just in time.

He need not have worried, as the odds that the city would move forward with removing the encampment while Judge Jones was deliberating were effectively zero. The city does far too much business in front of Jones — including still-pending sanctions over the contempt finding last week — to do something that outrageous without very good reason. If a gun battle or a massive fire broke out in the encampment, they might have moved in; but instead they sat tight last night and this morning and waited for the judge.

With much of the city (and all of Capitol Hill) waiting impatiently, Judge Jones didn’t rule this morning. But that doesn’t mean that nothing happened in the case — or that it couldn’t get weirder. Late morning, the city filed a declaration informing the court that Yeager had accepted an offer of shelter in one of the city’s tiny home villages and was in the process of filling out the intake paperwork. That’s a piece of information that changes everything: if the case’s one and only plaintiff is no longer residing in Cal Anderson Park, then there is no longer an “active controversy” and the case is moot (and should be dismissed).  A spokesperson for the city confirmed for SCC Insight that Yeager was, indeed, offered a tiny home village unit and had accepted — and that she had previously been offered one before filing her lawsuit. There has been no further explanation as to why Yeager chose to accept the offer of shelter today, especially after refusing it before.

But there’s more weirdness. Today Mayor Durkan made her regular weekly appearance on KUOW’s “The Record,” in which the topic of the encampment removal at Cal Anderson Park naturally came up. According to a declaration filed with the court this afternoon by Yeager’s attorney, Mayor Durkan referred to the encampment as a “political occupation,” which he claimed reinforced their claims that the city’s effort to remove the encampment is an attempt to violate Yeager’s First Amendment rights. Further, he included an email thread between an activist and Parks Department employee noting that the city is not removing encampments at other nearby parks, and asserted that it was further proof that the the Cal Anderson removal was an effort to suppress protected speech — neglecting to mention that later on in that email thread the Parks official makes clear that the Cal Anderson encampment is being removed because of threats to the physical safety of Parks maintenance staff.

Finally, just before 4:30 this afternoon, Judge Jones issued his ruling, in which he denied the plaintiff’s request for a TRO. He focused on the first of the four-part test, showing likely success on the merits of the case, which courts recognize as the most important of the four. And he found that the plaintiffs had not shown that they were likely to succeed on the merits of any of their allegations, in most cases simply because they failed to produce much (or in some cases any) evidence to support their claims. Nor could they refute the city’s interest in restoring public safety for the Park and for Parks staff. Finding that “failure to satisfy this prong is fatal to Ms. Yeager’s motion,” Judge Jones declined to address the other three.

Technically, the case is still alive, and the judge ordered the two sides to confer and propose by December 28 a mutually agreeable schedule for briefings for a preliminary injunction. However, this case will be moot long before then: either because Yeager will imminently move to a tiny home village, or because the city will remove the encampment. While the city was willing to sit tight overnight, it is unlikely to wait two or more weeks without a court order forcing it to do so.

Judge Jones did acknowledge the seriousness of the situation for the homeless individuals living in the park, saying that “the City’s timing is regrettable — clearing the park during the winter season during a pandemic.” But in the end he decided that the law did not allow (or perhaps compel) him to grant a restraining order against the city.