Yesterday Councilmember Lisa Herbold and her Public Safety and Human Services Committee tried to move forward their effort to rewrite the Council’s ban on SPD’s use of so-called “less lethal” weapons for crowd-control. Herbold is charting an unconventional and somewhat tenuous path; there are ample headwinds, and progress is slow.

At the committee’s last meeting two weeks ago, Herbold unveiled a draft “base bill” that incorporated the consensus views of the city’s triumvirate of accountability organizations — the OPA, OIG and CPC — and led a discussion among the Council members on the remaining points of disagreement to begin to collect feedback for the next revision.

That “revised base bill” was the centerpiece for today’s meeting. Herbold’s plan was to walk through it, have the committee vote on potential amendments, and then vote to send it on to its next step. But that anticipated next step is different from typical Council bills: instead of moving to the full Council for final approval, it would be sent to the Department of Justice and the court-appointed police monitor for their review and feedback, and if they approve then on to Judge James Robart for his blessing, all before the Council formally adopts it.

Herbold has chosen a creative, if somewhat dubious, way to do this: she is intentionally not running it through the Council’s normal legislative process, which involves placing it on the weekly Introduction and Referral Calendar and having it referred to her committee. Instead she is simply holding “briefing and discussion” meetings to craft the bill. In practice, what this means is that the public’s view into this process is constrained. The Council’s regular legislative and bill-tracking process is a bit cumbersome, but it guarantees that bills’ contents are publicly disclosed and changes and approvals are formally documented, with enforced transparency at several points along the way. In this case, the “revised base bill” was never published in advance of yesterday’s meeting, nor were the proposed amendments to be discussed. Official bills must have a title that tells the public what is in a bill: if a bill is amended in a way that renders the title no longer accurate, the bill must start the process over and be re-introduced with a revised title, so that everyone has full transparency to the contents of the bill. Under Herbold’s process, those rules don’t exist.  Further, the agendas for Council meetings, which must be published at least 24 hours in advance, must provide notice of agenda items, including when votes are scheduled. The agenda for yesterday’s meeting listed the crowd-control weapons bill as a “briefing and discussion” with no notice of Herbold’s intent to vote on amendments and a motion to send the bill directly to the DOJ and police monitor for review.

In an interview following the meeting, Herbold claimed this was all appropriate, though she said that the bill and amendments were supposed to be published to the Council’s web site late Tuesday afternoon and apologized for the fact that they had not. She also said that she had validated the process she is using with the City Clerk (who serves as parliamentarian for the Council) and with the City Attorney, saying “We’re not legislating right now,” and “It’s more a series of recommendations. There’s not a base bill.”

To quote our new President, that’s a bunch of malarkey. The original draft of the bill was referred to dozens of times in yesterday’s meeting as the “base bill,” with the most recent version as the “revised base bill.”  The proposed amendments all were presented the same way that as they are for introduced bills (and the ones for this bill are explicitly labeled as amendments “to the base bill”). 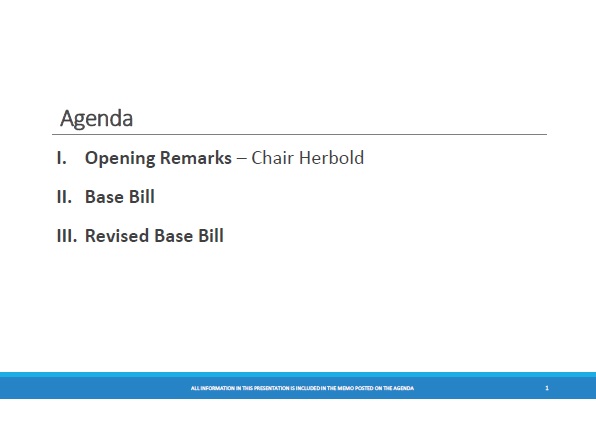 What’s puzzling is that there are at least three different ways that Herbold could have run it through her committee without cutting corners:

So in a nutshell: Herbold is legislating, but not legislating, and that makes it harder for us to track what’s going on with this effort.

Unfortunately, Herbold couldn’t even pull off her light-process version of getting the bill out of committee yesterday. She placed the bill late in the agenda, and it fell victim to three earlier agenda items that ran well past their allotted time block. The committee ran out of time and was forced to adjourn before it could finish its discussion of all the potential amendments, and never got to vote on any of them. So the bill is still stuck in her committee.

But that’s only half of the problems with this effort. The Seattle Police Department is also simultaneously revising its crowd-control and use-of-force policies, following the process specified in the 2012 Consent Decree and with the intent to submit them to the DOJ and police monitor. It too has hit some stumbles, mainly in engaging with the Community Police Commission, but seems to be on-track to send over its draft updated policies next month. That means that the DOJ and monitor will be reviewing two sets of proposed changes to SPD’s allowed use of crowd-control weapons that are not aligned, and will be put in the awkward position of addressing the conflict between the Council and SPD.

The Consent Decree only lists a role for SPD in proposing revisions to the department’s policies — though Herbold notes that it doesn’t explicitly prohibit the City Council from doing so as well. Last summer Judge Robart enjoined the Council’s original ban on crowd-control weapons from going into effect, in part because it didn’t follow the process laid out in the consent decree. He followed that up in October with a preliminary injunction with no explicit end-date, at the request of the city and DOJ in order to allow the Council’s bill to go through the official Consent Decree policy review process — which Herbold reads as Judge Robart’s tacit acknowledgement that the Council has the right to legislate in this domain.

Still, the Council and SPD are on a path for a head-on collision, one that seems unavoidable at this point: SPD is required to do regular policy revisions under the consent decree; and as Herbold explains, “there is a desire on the Council to legislate and have a policy on the books.” When asked whether she and SPD have tried to combine their efforts, Herbold said that SPD has expressed their view that the Council should not be legislating at all in this area, and that has made collaboration “difficult.”

Herbold hopes in the end to see “a high-level ordinance that doesn’t get into the nitty-gritty of some of the deployment decisions that are more appropriate for policy,” allowing for an ordinance and an SPD policy to co-exist. Yet she and her Council colleagues believe that there is an important role for an ordinance: for instance banning blast balls, a perennial recommendation of the CPC that has never been implemented, and a concern raised by Judge Richard Jones in the ongoing lawsuit by the ACLU and Black Lives Matter:

“Of the less lethal weapons, the Court is most concerned about SPD’s use of blast balls, the most indiscriminate of the four. As explained below, SPD has often hurled blast balls into crowds of protestors. In many cases, the accuracy of these baseball-style throws is suspect. And when blast balls explode, they explode in all directions and kick OC powder in the air. Given their indiscriminate nature, blast balls pose a greater collateral danger to peaceful protestors than, for example, the FN 303 launcher.”

Here’s what’s in the “revised base bill” discussed yesterday:

The Council briefly reviewed four potential amendments as well. One extends the effective date of the ordinance until 30 days after the Court approves it. Four offer variations on the private right of action included in the original ordinance passed last summer. Herbold, at the urging of the City Attorney, proposes a change that disallows the private right of action for anyone who participates in a violent public disturbance prior to or during the use of the less-lethal weapon by SPD; while Sawant believes that is a new loophole that SPD will exploit and wants to remove it, or short of that to limit it to the cases where SPD’s use is permitted (so if SPD uses a banned weapon, a victim will have a private right of action regardless of whether they broke the law themselves).

Herbold said that by the time her committee takes up the legislation again in two weeks, there may be additional amendments for them to consider.

To sum up: nothing is simple with this effort. The Council is going off the beaten path to rewrite their crowd-control weapon ordinance, and when they are done the DOJ and police monitor will need to try to reconcile it with SPD’s own proposed policy revisions. Assuming all of that works out (far from a sure thing — it’s hard to predict which provisions the DOJ and police monitor will like), the result will still need to run the gauntlet with Judge Robart.