(updates below re: rescheduling the second half of the presentation — it will now be on February 26 instead of next Monday)

Over the weekend the City Council published the preliminary report of the Black Brilliance Research Project, a $3 million effort commissioned by the City Council and led by King County Equity Now. The contract calls for KCEN to do research in advance of a community-led “participatory budgeting” program to invest $30 million of public funds in creating community safety.

The 1045-page report, originally submitted to the city on December 21, has spent a month being hammered into shape by the Council and KCEN through an internal review and editing process. In concert with the publishing of the preliminary report, project leaders are presenting their findings and recommendations split over two meetings with the Council. The first half of the presentation was delivered yesterday morning and focused on priority areas for community investments; the second, originally scheduled for next Monday but rescheduled for February 26, will concern recommendations for how a participatory budgeting program should be implemented this year. You can watch yesterday’s presentation here.

The core of the report is about 85 pages, and is split between discussion of priority investment areas and a proposed roadmap for the participatory budgeting (PB) process. The other 950-or-so pages are a hodge-podge of appendices, mostly consisting of reports from some of the subcontractors in the research team.

There are several important learnings in the report that are worth consideration, and some serious thinking went into what a participatory budgeting program might look like in Seattle. That said, the report can be challenging to read: it’s a flashy, shifting maze of colorful page layouts, photographs, and non-sequitur pull-quotes that make it difficult to follow the flow of the report and to identify those key insights.

The research project identified five high-level recurring themes in their investigation that form the basis for priority areas for investment of the $30 million in funding allocated by the City Council:

Housing and physical space:  There are two important insights in this section. First, it reminds us that decades of structural racism in zoning, real estate transactions, and financing has left the Black community, and other BIPOC communities, with little ownership of housing, commercial spaces, and community buildings in the city, which severely limits their independence and self-determination; they are at the mercy of landlords and developers. That suggests that investments that increase the number of Black-led and Black-owned properties and spaces should be one priority. The second insight is that there is a critical scarcity of housing for those formerly incarcerated, leaving them vulnerable to homelessness and dependent on family and the community for shelter. Post-incarceration housing, the report argues, should also be an investment priority.

Mental health: The report calls out several issues specific to how mental health services are made available to BIPOC communities. First, many of the city’s mental health service providers are not prepared to provide culturally-relevant services, including for example being prepared to address issues of race and the impact of racism with their patients in therapy sessions. There is also a lack of providers who can adequately provide therapy for those suffering from the trauma of incarceration. There are also limited sources for financial assistance in obtaining mental health services; this is exacerbated by the fact that according to the report most Black therapists don’t bill health insurance companies directly, so their patients must pay for services out-of-pocket and wait to be reimbursed by their insurance provider. The reimbursement model creates an extra burden on financially strained individuals attempting to obtain mental health services.

Youth: The report argues that the youth incarceration system creates additional trauma for jailed kids, with little to no mental health support to help them move forward post-incarceration. Separately, it suggests that youth, who are stakeholders in the programs targeted to them, need and want to have a greater say in determining the programs that are funded. Finally, it argues that mentorship programs outside of school should be a funding priority.

Crisis and wellness: The report identifies two areas in particular as funding opportunities: support for victims/survivors of domestic violence, and support and treatment for those with substance abuse issues. But it goes further, explaining that their researchers found a desire in the community for peer-based, “hyper-local” approaches to delivering programs and services around crisis and wellness with roots in the communities they serve, rather than larger, outside organizations.

Economic development: The report lists several impediments to individual and community economic development that suggest investment priorities. First, there are structural barriers to BIPOC communities accessing affordable housing, due to qualification requirements that insist on a tenant having documented monthly income at least 2.5 times the rent amount, as well as other rules that serve to exclude members of BIPOC communities from subsidized housing. In addition, the report argues that a culture of criminalization, and the stigma that accompanies those with past criminal records for the rest of their lives, creates an unending series of structural and cultural barriers to Black economic development through policies governing housing, employment, and access to services. The report recommends that community-based organizations receiving public funding should be required to offer services to formerly incarcerated individuals. It also suggests that “cradle to career” pathways, with relevant mentoring, should be a funding priority to help individuals establish their economic footing.

Recommendations for a Participatory Budgeting process

At a high-level the participatory budgeting process, as sketched out by the Participatory Budgeting Project, a nonprofit that advocates for and supports PB efforts in jurisdictions around the world, is fairly simple: 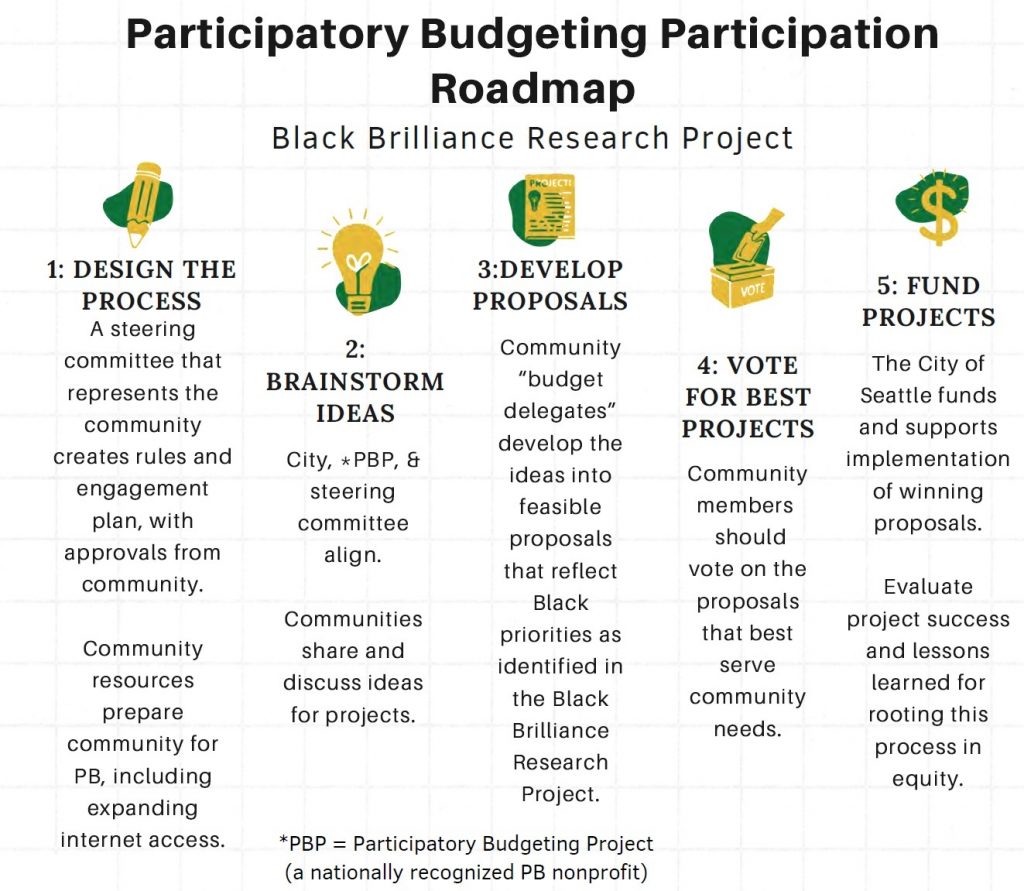 The trickier part is in deciding who runs the process, who is responsible for what, and who gets to appoint people to the various workgroups with decision-making power. 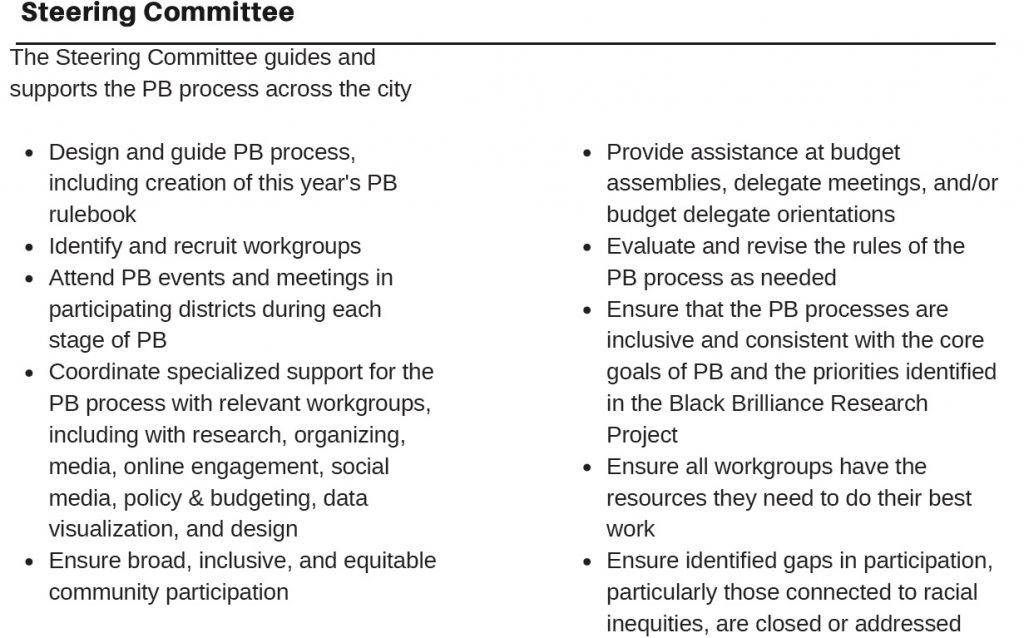 Here’s the report’s somewhat confusing description of how the members of the central Steering Committee would be chosen:

The citizen jury will be selected using a random sample from the candidate pool. The citizen jury will include individuals who complete the aforementioned application, representation from BBR organizations (to ensure BBR priorities are implemented), and 1 member from the City department that is leading PB (e.g. OPCD). The steering committee may decide a different selection process  for other PB workgroups’ members.

Must include people with the following lived experiences:

From there, the report lists a number of workgroups and other stakeholders that must be joined into the PB process, starting with some key workgroups that the Steering Committee must populate: 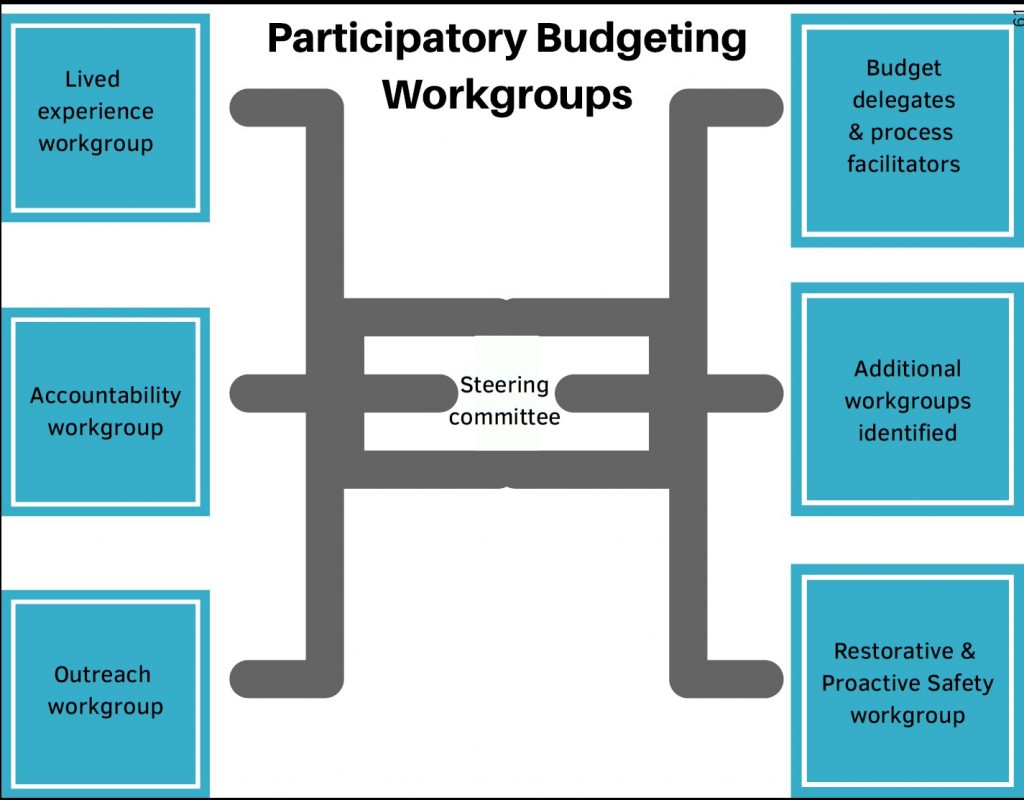 The other stakeholders include:

The BBRP report advocates for an aggressive timetable in order to allow for funding of projects in the fall of 2021, starting with idea collection later this month and with voting occurring from mid-July to mid-August:

This is more aggressive than what the Participatory Budget Project suggests in its sample timeline (included in the report’s appendices): 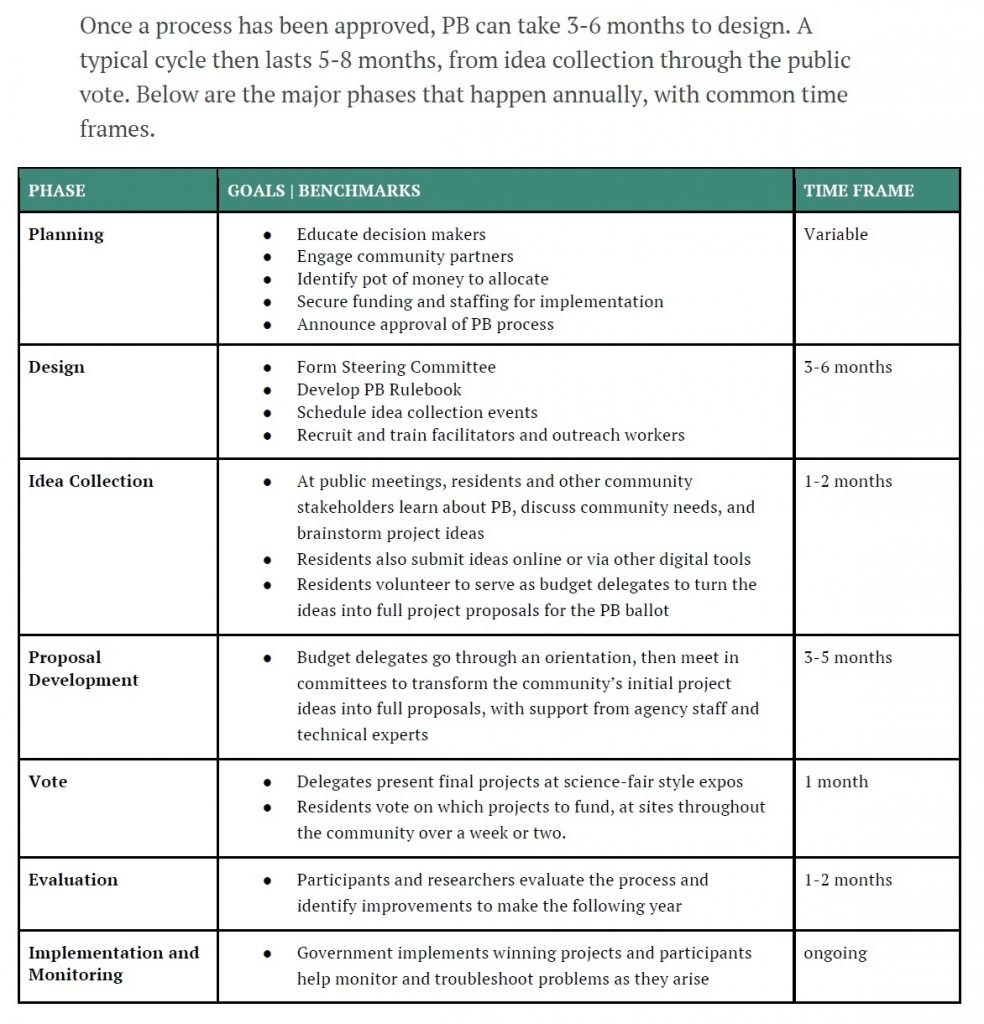 According to this template, the most optimistic estimate would say there is seven months of work to do before voting can begin; the pessimistic estimate is 13 months, and given that what is envisioned in Seattle is a comparatively large PB program being done for the first time, it’s fair to assume that it will be toward the longer end of the range (even before taking into consideration the “Seattle process”).

There are many other issues that will need to be worked out during the remainder of the planning phase, and into the design phase. Those include:

Expect a follow-up SCC Insight article in the coming weeks on “process issues” related to the Black Brilliance Research Project, including its finances (Crosscut confirmed that the State Auditor is investigating the contract) and the work that went into hammering this report into shape since it was delivered to the Council in mid-December. Your faithful reporter is still collecting important information relevant to that story.

In the meantime, Councilmember Morales expects both to hear the second half of the presentation with recommendations for the PB process, and to receive the final report, in her committee on February 26.