As if election years weren’t fun enough, the time has come for the first Seattle City Council redistricting, when boundaries get adjusted to rebalance the populations of the seven Council districts. 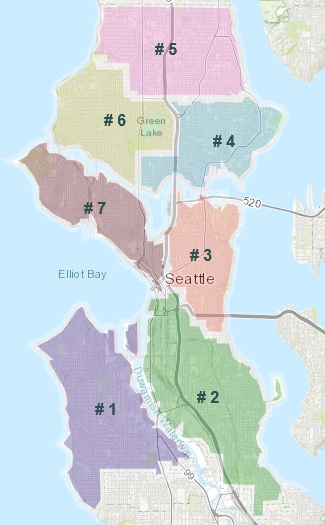 In 2013, Seattle voters passed a City Charter amendment that switched the City Council over to a mix of two city-wide positions and seven district-based ones. The initial district boundaries were defined in the charter amendment, based upon 2013 population estimates for neighborhoods, so that each district had about 89,000 residents plus or minus around two thousand. 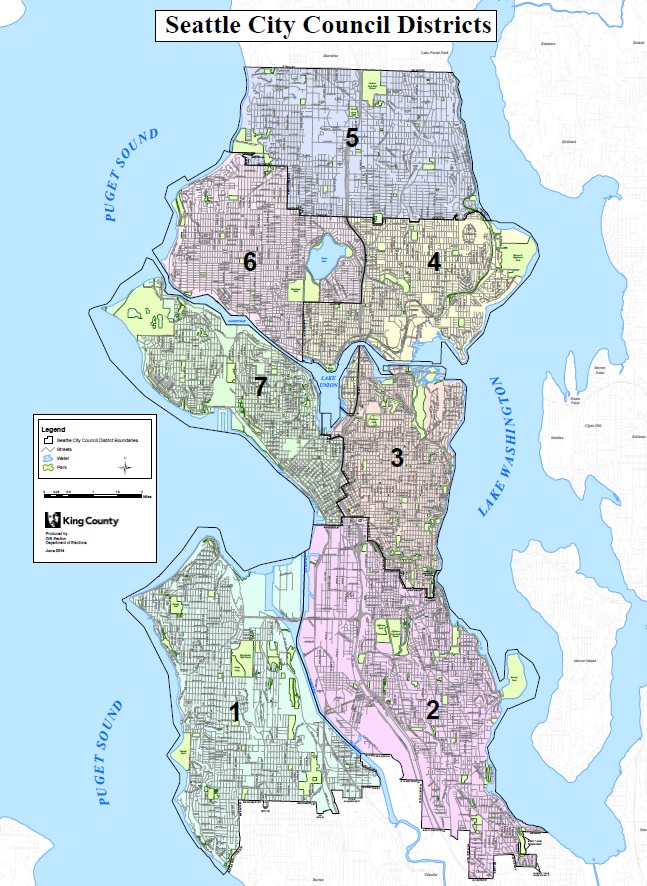 The charter amendment also establishes the process and rules for redistricting following every decennial census — like the one held last year. Here’s what it says:

The charter amendment also lays out the ground rules for the Commission and districting master in designing the new districting plan:

In late 2019, the Seattle Times looked at how Seattle’s dramatic population growth over the previous several years had affected the size of each Council district. Using the most recent figures from the Washington State Office of Financial Management, they found that while all seven districts had grown, it was very uneven: at the low end, District 5 had only added about 10,000 people, while District 7 had added over 33,000.

We can use those figures to take a first look at where the upcoming redistricting is likely to shift some boundaries, but there is a big caveat we need to keep in mind: 2020 was a crazy year. There is evidence of a significant net migration out of the urban areas of the city last year, though we don’t have clear data on what happened in the less dense residential areas. Also, we need to keep in mind that the 2020 census figures, which will be the basis for the redistricting, were being collected in a rolling count throughout last year; we don’t know how much of the count took place before, during, or after the migration happened (it was likely a bit of each) and so the final census counts are still a big question mark until they are released in September. Nevertheless, the 2019 numbers that the Seattle Times used give us a rough idea of what lies ahead.

Here are the population counts for each district, as of 2019:

You will recall that according to the rules in the city charter, the difference between the largest and smallest districts can be no greater than 1% of the population — in this case, 7,410 people. I’ll spare you the complicated math (if you’re interested, email me and I’ll send it to you) but it turns out that the absolute maximum population that can be in a district after the redistricting process is 113,132, and the absolute minimum is 100,325. But in truth we want the district populations to straddle the average more closely to ensure that all Seattle residents have equal representation. If we want them to stay near the average plus or minus .5%, then the allowable range is 102,993 to 110,464.

But there are other problems too that become obvious when we start looking at the map. For example, District 1 needs to grow, but the only other district that it touches is District 2 — which also needs to grow. Since by the rules the district boundaries must be contiguous, we have to move part of the western section of District 2 into District 1, thereby making D2 even smaller. That isn’t a huge problem, because D2 is just barely outside of the allowable population range. But since we also want to keep neighborhoods intact there are really only two options for what to move over: SODO/Duwamish to the south end of the D1/D2 boundary, or Pioneer Square and the CID to the north end. And the population of SODO/Duwamish, which is mostly industrial land, is not large enough to push D1’s population up to where we need it to be. So that means there is little choice but to move the Pioneer Square/CID neighborhood into D1.

But now we’re repeating ourselves, because after that adjustment the only other district that D2 now touches is District 3. It turns out that this isn’t too hard to fix though: the existing map already slices the Mount Baker neighborhood in half; if we push the northern part of Mount Baker, plus Judkins Park and Leschi, into D2 (a nice, clean east-west line at Yesler) then that balances D2 out.  District 3 needed to shrink anyway, and stealing that little sliver of Eastlake from D4 and adding it back into D3 makes the numbers work out.  It does raise one important concern though: this would concentrate the Black community even more in D2, potentially reducing its representation on the City Council. Whether that is the right thing to do will need to be a topic of robust conversation in the community as the redistricting process moves forward, if the districting master does end up proposing that change.

District 5 is also a problem: it’s adjacent to D4 and D6, and needs to grow more than any other district, but D4 doesn’t have enough to spare (and it already has a clean boundary with D5 that would be hard to change). And D6 also needs to grow.

District 7, on the other hand, has the opposite problem: it needs to shrink by a LOT. But if we’re willing to make some big changes in D6, we can solve all of these problems: move Magnolia from D7 to D6, and move Greenwood from D6 to D5. 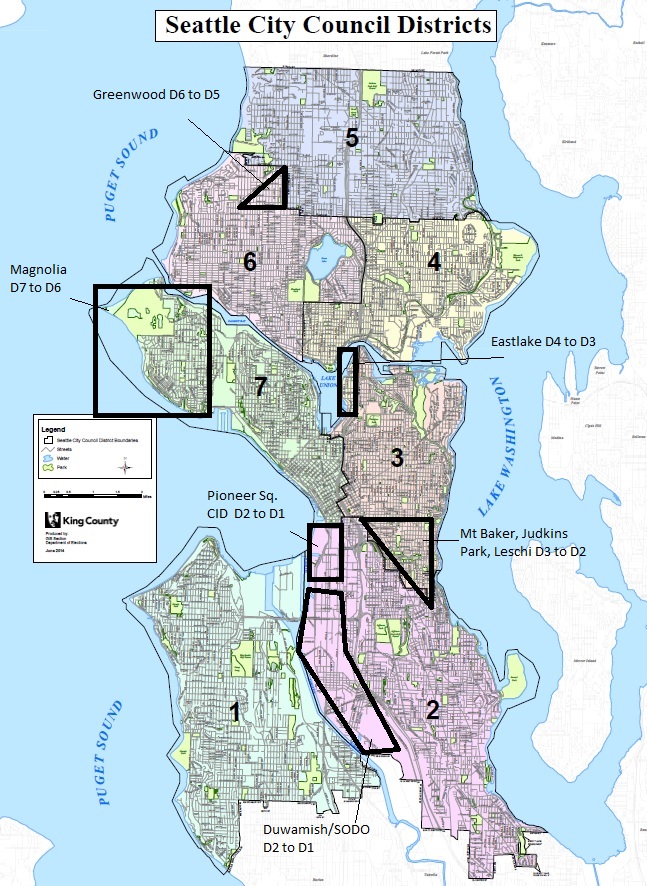 By no means should you read this as an exact prediction of what the redistricting master will ultimately do, but as a proof-of-concept it gives us a sense of the kind of changes to the Council districts we can expect given the uneven growth Seattle has seen in the last several years, and the problems that the master and the Commission will need to wrestle with. A few districts, most notably 2 and 6, are likely to see a lot of boundary movement. Others will see less, but only D4 might escape redistricting unchanged.

If you want to try your hand at messing with the district boundaries, I recommend this site as a starting place, which can show you the Council districts as well as neighborhood and census tract populations. The population data is a bit dated, however it should still give you some good approximations.

The city is getting an early start to the redistricting process: it has already opened up applications for seats on the Districting Commission. If you are interested, you can apply here.  Applications will be accepted until March 29.