Right to counsel legislation passes, plus other happenings today.

It took two hours — an hour of public comment, and an hour of debate and wrangling over amendments — but in the end the City Council unanimously approved an ordinance granting a right to legal counsel for tenants facing eviction who cannot afford an attorney. The big hangup, as expected, was the question of whether it should extend to all tenants, or just poor ones. Councilmembers attempted to thread the needle between avoiding the state Constitution’s prohibition on gifts of public funds other than to the poor or infirm, and avoiding creating a means-testing system that creates barriers to access.  Council President Gonzalez proposed an amendment that limited the right to counsel to the indigent, but left it up to the organizations contracted to provide legal services to determine how to certify indigence — and it is expected that they will simply ask tenants to self-certify that they can’t afford to pay for a lawyer.  Councilmember Sawant fiercely opposed the amendment, but in the end stood alone: the amendment was adopted by an 8-1 vote. The bill now goes to the Mayor for her signature.

The Council also passed an ordinance approving an update to Seattle City Light’s retail rates. On paper the rates will go up 3% by May, and another 3.9% next January. But this year’s update will be fully offset by the removal of a 3% surcharge, and next year’s will be partially offset by an expected 1.5% decrease in the Bonneville Power wholesale rates that the city uses to buy electricity.

Councilmember Juarez noted that her next committee meeting will be April 6, and will include the final round of appeals to the Waterfront LID assessments.

Councilmember Pedersen announced that his next committee meeting is scheduled for April 7, and will include a briefing and discussion of Seattle Public Utilities’ strategic plan and rate schedule. He noted that King County just raised their wastewater rates, which will be passed through to SPU customers.

Councilmember Mosqueda has published a schedule for her committee to consider and pass two ordinances appropriating funding from the federal American Rescue Plan Act. She is splitting up the funds expected in the first tranche of funding into two bills, in order to ensure that money can get out the door by the end of June to continue funding for existing programs that are about to run out of money. 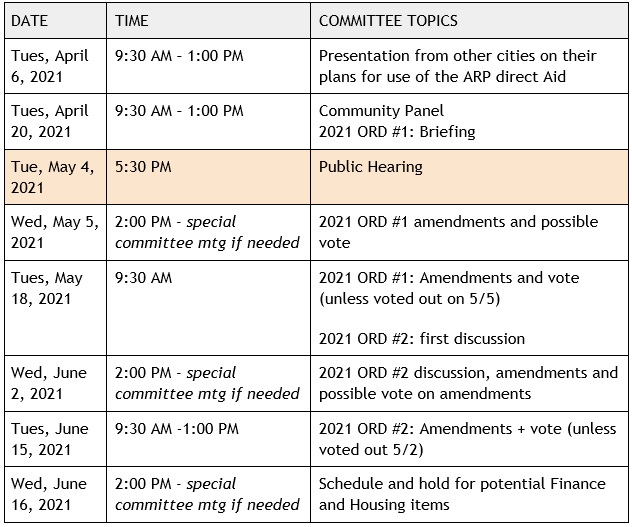 According to a press release today, Mosqueda expects to address the second tranche of ARPA funding, due next year, as part of the fall budget process.

Councilmember Pedersen reminded us that we can vote on the name for the tunneling machine cutting the new stormwater tunnel along the ship canal.

Pederson also highlighted WSDOT’s announcement that it will be closing the Montlake Bridge from August 9 through September 3, and then again for five weekends in the fall, to conduct major maintenance.

Councilmember Sawant announced that the Office of Sustainability and the Environment is now recruiting to fill more positions on the Green New Deal Oversight Board. Applications are due by April 16.