In a unanimous opinion issued this morning, the Washington State Supreme Court ruled that a recall petition filed against Councilmember Kshama Sawant may move forward. It found that three of the four charges in the petition were both factually and legally sufficient to justify a recall election.

Here is SCC Insight’s previous summary of the arguments made by both the petitioners and Sawant in front of the Court.

The Court’s role in reviewing recall petitions is narrow: it doesn’t determine whether the charges are true or not — that is left up to the voters — but it determines whether the evidence provided, if true, is factually sufficient to prove the charge, and whether the charges are legally sufficient to meet the standard for a recall. Elected officials may only be recalled for malfeasance, misfeasance, or violating their oath of office; they may not be recalled simply because voters dislike discretionary decisions they have made.

In brief, here is what the Court decided on the four charges:

1. That Sawant delegated decision-making on hiring and firing city staff in her Council office to an outside organization, Socialist Alternative:  the charge is factually sufficient, but legally insufficient, so it cannot move forward.

2. That Sawant used public resources to support a ballot initiative (the Tax Amazon ballot initiative) in violation of city and state laws: the charge is both factually and legally sufficient and can move forward.

3. That Sawant opened up City Hall using her passkey and allowed protesters to occupy the lobby and hold a protest during the COVID “stay at home order” and while City Hall was shut down:  the charge is both factually and legally sufficient and can move forward.

Now for the deep dive on the decision.

Here’s SCC Insight’s original story from 2019 that led to this charge. Sawant argued that she had “consulted” with Socialist Alternative but had not delegated decisions to them; but both the trial court and the Supreme Court found that the evidence supported the conclusion that she had in fact allowed Socialist Alternative to make decisions, and specifically the decision to fire one of her staff members. However, the Court cited case law allowing elected officials broad freedom in how to structure their decision-making process, and especially so when it relates to political organizations, so it decided that the charge was not legally sufficient. The petitioners did not present any of the evidence of Sawant’s financial entanglements with Socialist Alternative (her husband works for them, and SA pays travel expenses for both of them to fly to meetings), which might have swayed the Court to rule otherwise.

Using city funds to support a ballot initiative, and for other than a city purpose.

Here is SCC Insight’s reporting on this charge, which is still pending in front of the Seattle Ethics and Elections Commission and which has been concluded with the state Public Disclosure Commission.

Sawant argued that since the Tax Amazon ballot proposition had not been filed at the time she authorized her office’s staff and funds to sponsor two events in support of the initiative, provide food for the events, print up promotional materials and pay for phonebanking, it was all legal. She cited a prior case in which it was ruled that initiative campaigns don’t need to file financial reports if they never actually file their initiative to begin gathering signatures. The Court disagreed, noting that even that case required financial records from before the filing to be submitted once the initiative is actually filed — and the Tax Amazon initiative was indeed filed. Further, it said that both state and city laws make clear that the rules for allowed campaign contributions and expenses apply regardless of whether they happen before or after the initiative is filed.

Sawant further argued that she did not intend to violate the law. The Court’s ruling bluntly retorted, “An elected official’s ignorance of the law is not enough to circumvent an elected official’s responsibilities,” and pointed out that Sawant’s annual financial disclosure form requires her to acknowledge that she has read and is familiar with the city ordinance on the use of public facilities in campaigns.

Interestingly, the Court got into the weeds on what is and is not allowed: “Councilmember Sawant is correct that as a politician, she is free to sponsor events using her office and to provide food to constituents. But, by providing picket signs and phone banking for the initiative, her conduct crossed into the territory of promoting a ballot proposition because these are explicit actions taken in support of the ballot proposition.”

The Court notes that Sawant “does not appear to contest the factual sufficiency of this charge” and focuses on the legal issues.

Sawant argued that she was exercising her right to protest, that she did not believe that her actions violated the Governor’s “stay home” order in effect at the time because it did not explicitly prohibit political protests, and that she had discretion to bring guests into City Hall and was unaware that City Hall was closed that day.

The Court shredded these arguments. It pointed out that on June 1, Sawant and her fellow Councilmembers prohibited in-person attendance at City Hall until June 17, citing the Governor’s order. While it found that Sawant did not have a duty to uphold and enforce the Governor’s order, she “arguably obstructed city business and placed people at risk by failing to ensure social distancing and sanitation measures established by the Washington State Department of Health guidelines.” It found that these were discretionary acts, which an official may only be recalled for if they are found to be “manifestly unreasonable,” but that the voters have the right to decide whether her acts meet that standard. The Court also found that her act of letting protesters in to City Hall was a use of ciy resources “not related to a city purpose.”

Sawant argued that she did not lead the protest — though she spoke at it — and that she does not know and has never known the home address of Mayor Durkan. On the other hand, she said that the protest spot was chosen in part because it was in her district, showing there was clear coordination between her and the organizers.

However, the Court’s ruling on the legal sufficiency is more nuanced. It found that the facts are insufficient to support a charge of criminal harassment or harassment of a public official. “While it is true that protestors defaced and damaged Mayor Durkan’s home, there is no support offered showing that Councilmember Sawant herself threatened to cause bodily injury or physical harm to property; or that she exhorted others to engage in such conduct; or that by use of a threat, she attempted to influence the mayor’s vote, opinion, decision, or other official action.”

However, the Court did find that the facts (if true) are legally sufficient to conclude that Sawant violated Seattle Municipal Code 4.16.070(D)(1), which says that city employees may not “disclose or use any confidential information gained by reason of his or her official position for other than a City purpose.” That would constitute both malfeasance and a violation of Sawant’s oath of office.

That said, the case will need to go back to the trial court for the judge to rewrite the ballot synopsis to remove the one charge that the Court disallowed in today’s ruling. Then it will be officially certified, and the petitioners will have 180 days to gather about 10,000 signatures from District 3 voters to put it on the ballot.

Assuming they manage to gather the necessary signatures, the timing of the election becomes very interesting. In order for the recall to land on the August ballot, the signatures would need to be submitted by the mid-May deadline. That might be a stretch. If they miss that deadline, then state law says that once the signatures are verified (which could take a month or so) an election must be held no less than 45 days and no more than 90 days after, with a preference for inclusion in regularly-scheduled elections. Depending on exactly when the signatures are filed and verified, the recall could end up on the November ballot, or a special election may be required solely for the Sawant recall. The recall campaign may have some interesting decisions ahead of them to suss out which of those options is to their advantage; but at the moment their focus will be on getting the ballot synopsis done and gathering signatures.

Sawant, of course, won’t take this lying down. Her “Kshama Solidarity” campaign has been aggressively fundraising to fight both the gathering of signatures and any potential recall election. As of two days ago, they had raised $426,000 to the recall campaign’s $294,000. 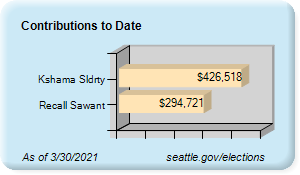 However, only 16% of that campaign war chest was raised from District 3 residents; nearly two thirds comes from outside the city entirely. The financial reports suggest that she has been running fundraising events in several cities where Socialist Alternative has a significant presence, including Philadelphia and Minneapolis. 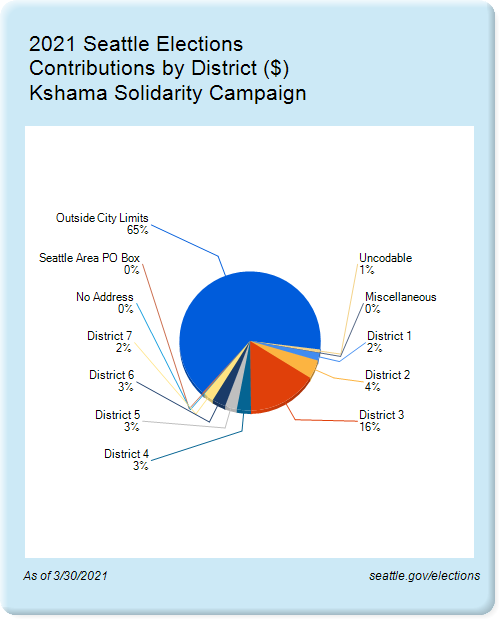 The recall campaign’s fundraising is a bit harder to make sense of; they have emphasized smaller donations below the threshold at which names and addresses must be collected, so while at least 31% of its donations are from within District 3, it’s difficult to know how much larger than that the real number might be — or how high its donations from outside the city truly are.

One other note: Sawant will have another distraction as well: the case pending in front of the Seattle Ethics and Elections Commission related to Sawant’s misuse of public funds in support of the Tax Amazon ballot initiative. The case been on hold pending today’s ruling, as it was clear that the Court would largely be deciding the legal issues for them. Now with the ruling in hand, the case will go forward — and Sawant has all but lost it. At a recent meeting of the Seattle Ethics and Elections Commission where the status of the case was discussed, Sawant’s attorney indicated that if the Court ruled against her then she would be willing to negotiate a settlement. Of course at this point with the tide going against her, it won’t be a favorable settlement.