A lot has happened since April 1 when the Washington State Supreme Court ruled that the recall petition against Councilmember Kshama Sawant could move forward.

As you may recall, on the morning of April 1, the Supreme Court ruled that three of the four charges alleged in the recall petition were factually and legally sufficient to move forward to the signature collection phase of the recall effort. That sent the case back to King County Superior Court Judge Jim Rogers to re-issue the ballot synopsis with modified language to reflect only the three surviving charges.

Wasting no time, that afternoon the attorneys for the recall campaign filed a motion with the King County Superior Court, proposing an updated ballot synopsis. It dropped the disallowed charge, and also recommended some light editing to fix typographical and grammatical issues with the original synopsis approved by the court.

Last week attorneys for Sawant filed a response that asks for much larger changes to the synopsis. They largely re-litigate points that they raised last fall that Judge Rogers flatly rejected — twice (in his original ruling and in a motion for reconsideration). They also add two additional requests: that the ballot synopsis should drop references to Sawant having violated the City Charter and having “failed to comply with the public disclosure requirements” related to the Tax Amazon ballot initiative, with the reasoning that the state Supreme Court ruling didn’t reference them.

The claim that the Court’s ruling doesn’t rule on Sawant’s violation of public disclosure requirements is equally false, and made even more comical by the forceful language used by Sawant’s attorneys to make it:

“Not one word of the Supreme Court’s ruling, however, identified or discussed the legal or factual sufficiency of the latter part of the allegation, regarding failing to comply with “the public disclosure requirements” related to such support.”

From the last paragraph of the Court’s ruling (boldface added):

“We affirm the trial court, in part, and hold that petitioner’s charge that Councilmember Sawant used city resources to promote a ballot initiative and failed to comply with public disclosure requirements, disregarded state orders related to COVID-19 and endangered the safety of city workers and other individuals by admitting hundreds of people into city hall while it was closed to the public, and led a protest march to Mayor Jenny Durkan’s private residence, the location of which Councilmember Sawant knew was protected under state confidentiality laws, are factually and legally sufficient to support recall.“

Judge Rogers has called for oral arguments on the motion next week, though the hearing has not yet been scheduled. Sawant and her legal team are very likely to lose (and might get a tongue-lashing from the judge in the hearing next week), but even if they lose they will still have won in their battle to delay the beginning of the signature gathering process for at least another three weeks.

In the meantime, both sides have continued campaigning for hearts and minds in District 3 in advance of signature gathering — and both sides continue aggressive fundraising. According to the Seattle Ethics and Elections Commission, the recall campaign has raised $337,000, and the “Kshama Solidarity” campaign opposing the the recall has raised $425,000. However, the two war chests have been filled very differently: 41% of the recall campaign’s funds have come from within District 3, which Sawant represents, while only 16% of Sawant’s campaign funds have come from within her district. In contrast, nearly two-thirds of Sawant’s money has come from outside Seattle city limits altogether, versus 15% for the recall campaign. The finances for the recall campaign have been difficult to interpret in the past because of the very large number of small donations for which the campaign was not required to provide identifying information, but according to a campaign official they recently re-filed most of those donations and added sufficient information to allow them to be categorized by district — and thus the most recent reports from the SEEC provide a more accurate snapshot of where their money is coming from. The two factions have an ongoing PR war over which has the larger number of supporters within the district, but with the re-filing of the recall campaign’s reports, the recall campaign has 1,349 listed contributors to Sawant’s 898. We’ll see what happens once the signature gathering phase begins in earnest. 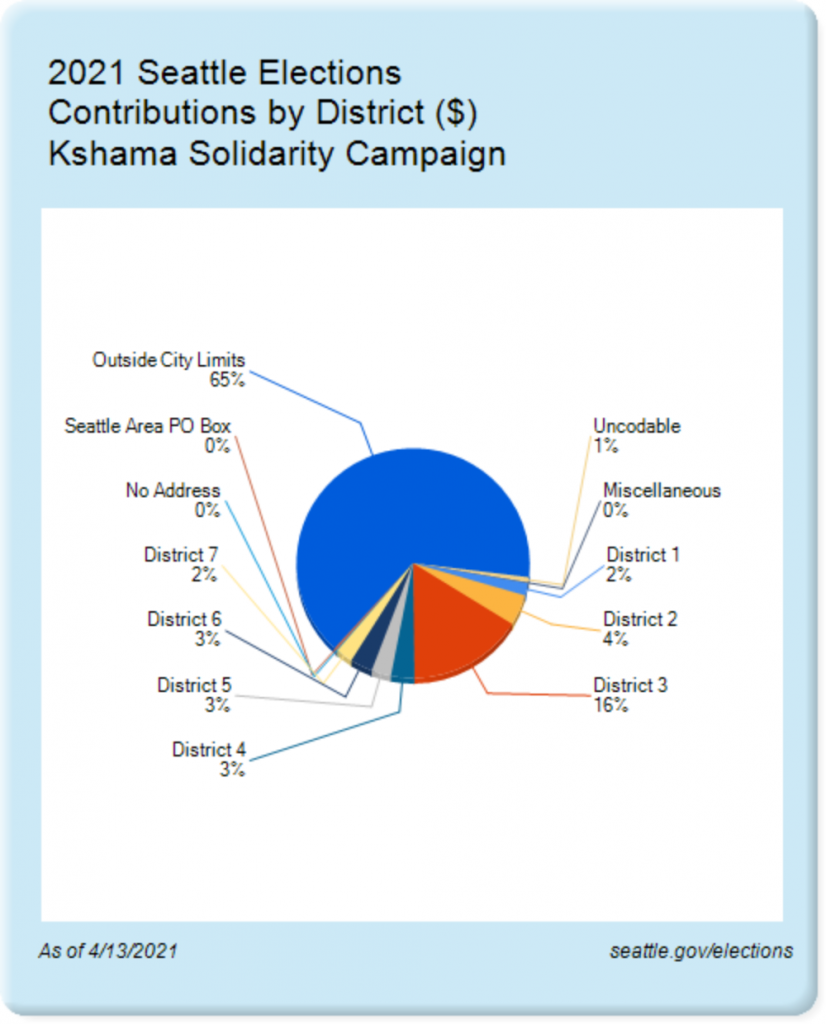 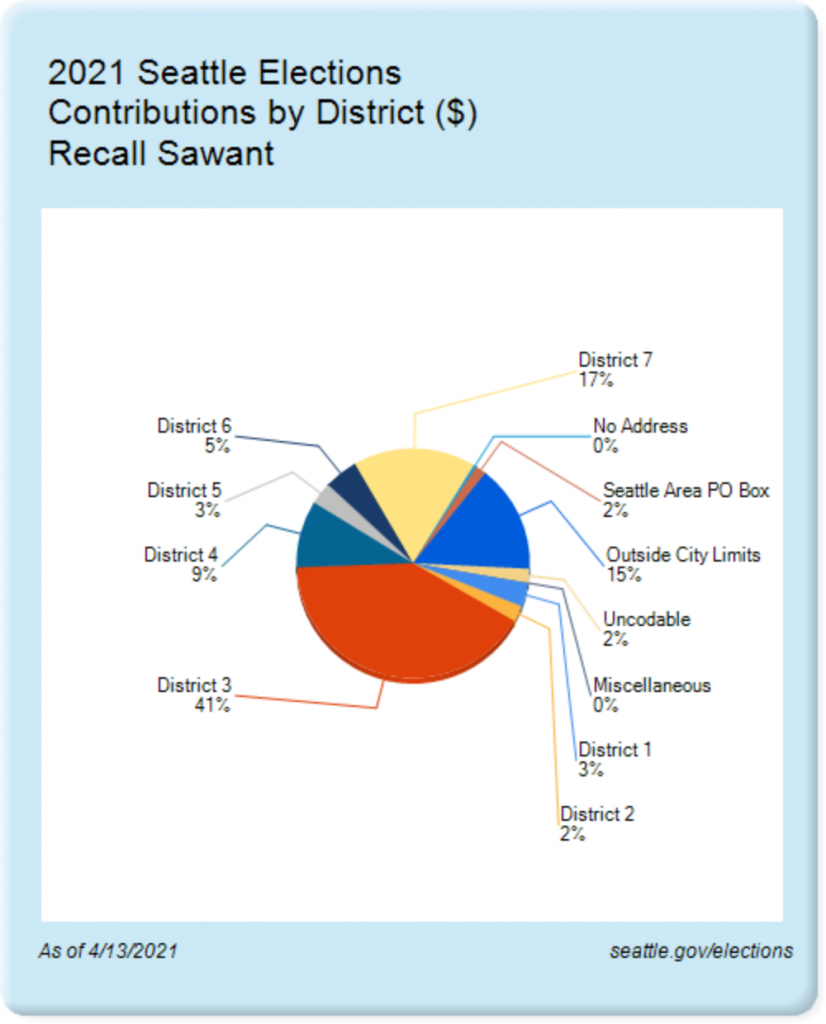