This afternoon Mayor Durkan, Council President Gonzalez, and Council Budget Chair Mosqueda announced a draft plan for how to spend $128 million in federal COVID relief funding that the city expects to receive this year.

The spending plan, to be introduced next week as draft legislation, follows the outline that the Council wrote into a resolution in March. It roughly organizes the spending into four buckets:

Housing and Homelessness. The biggest chunk of the housing and homelessness funding goes to capital investments to create an additional 300 units of permanent housing: $28.5 million that the city hopes to leverage with state funding to reach a total of $90 million. Accompanying that will be a series of incremental investments in programs to address homelessness: diversion and rapid rehousing, increasing emergency shelter (hotel rooms, tiny home villages and safe lots); and increased outreach services. 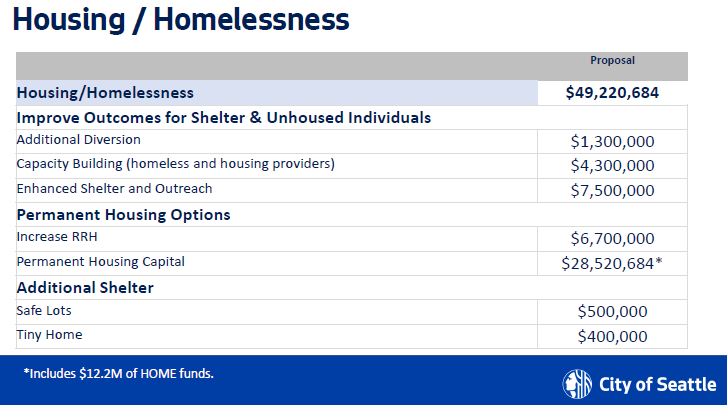 Reopening city programs and services. At a briefing yesterday, a spokesperson for the City Budget Office acknowledged that with the rapid deployment of vaccines, reopening is happening faster than city officials interpreted — and faster than they had budgeted for in 2021. So some of the funds are proposed to supplement city department funding so that parks and arts programs can restart this summer, along with a continuation of the Stay Healthy Streets program and investments in other community-led programs to activate public spaces. But the city will also need to spend nearly $8 million preparing for city workers to return to on-site work: changes to buildings and office space, and supplementing IT services to allow for flexible work over the transition.

Community and small business recovery. $22 million will be administered through the Office of Economic Development toward grants for small businesses, nonprofits, and neighborhood and downtown community organizations to assist with stabilization, recovery and reactivation across the city. Another $1 million will go to apprenticeships, retraining, and youth internship programs. 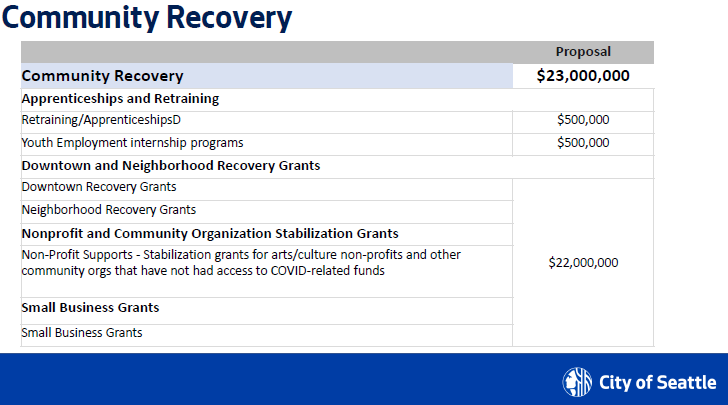 Community well-being. The majority of items in this last bucket are arguably a collection of earmarks for elected officials’ pet programs as well as funding requests from community-based organizations; that doesn’t mean that they aren’t good things to spend money on, however. 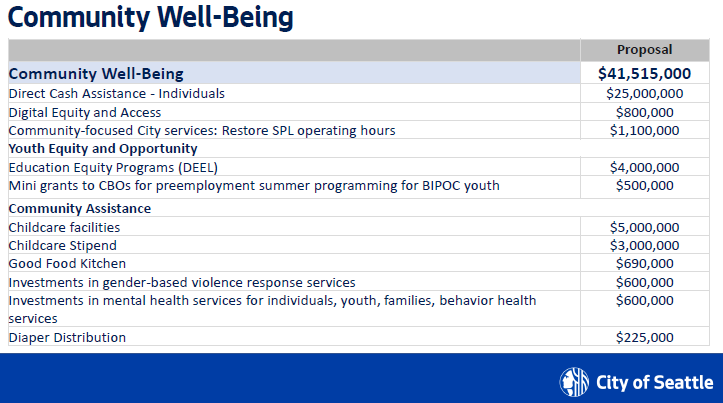 As the city built the proposed spending plan, it used a special checklist it created to evaluate the racial equity impacts of each of the components proposed to be included.

It’s easy to see the fingerprints of elected officials in the earmarks in this package: $25 million to the Office of Immigrant and Refugee Affairs for direct assistance to individuals (though the city claims the money isn’t solely targeted to immigrant and refugee residents), a favorite project of Council President Gonzalez; $8 million for childcare programs and facilities, close to Mosqueda’s heart; funding for gender-based violence response services, which Herbold added to the Council’s spending priorities resolution; $225,000 for diaper distribution, which has been promoted in the past by both Herbold and Morales; $1.1 million to restore Seattle Public Libraries’ operating hours, previously championed by Juarez; Stay Healthy Streets, which Strauss regularly cheerleads for.

And while the city has many needs as it comes out of the COVID shutdown, it’s also easy to be somewhat disappointed by the level of “peanut butter” spreading of the money, so that everyone gets a little but few things get enough to make a significant difference. This holds for the housing and homelessness spending as well: for example, the $500,000 to set up a “safe lot” will only support 25 RV’s, a drop in the bucket given the thousands of people living in their vehicles in Seattle and King County. Also the city expects to add only about 130 units of homeless shelter space. Spending $28.5 million on permanent affordable housing will create 300 units; every bit helps, but the city is still just nibbling away at its affordable housing shortage. No stakeholder will be able to complain to City Hall that they didn’t get their slice of the pie, but there are no big, transformative ideas — or funding proposals — coming out of this $128 million windfall.

The loser in this plan is transportation. While the Council’s original resolution laying out spending priorities included four related to transportation:

the only one of these that is getting any love is the first, with an unspecified amount going to support Stay Healthy Streets.

The spending plan bill will be introduced on Tuesday, and will get its first hearing in Mosqueda’s Finance and Housing Committee next Friday. Mosqueda expects to move it out of committee as soon as June 15, and get final Council approval on June 21. Later this summer the Council will take up additional spending authorization bills for smaller chunks of money coming out of other targeted programs in the federal ARPA package, included an expected $7.4 million to support seniors and $28.7 million for rental assistance.