This morning, Councilmember Lisa Herbold held a first hearing on her bill revising the Council’s ban on SPD’s use of so-called “less lethal” weapons.

SCC Insight previously summarized the changes in the bill from the version approved by her committee earlier this year. The hearing mostly was a walk-through of the bill, with only a handful of questions; the Council’s central staff provided a memo detailing the changes, as well as a handy chart: 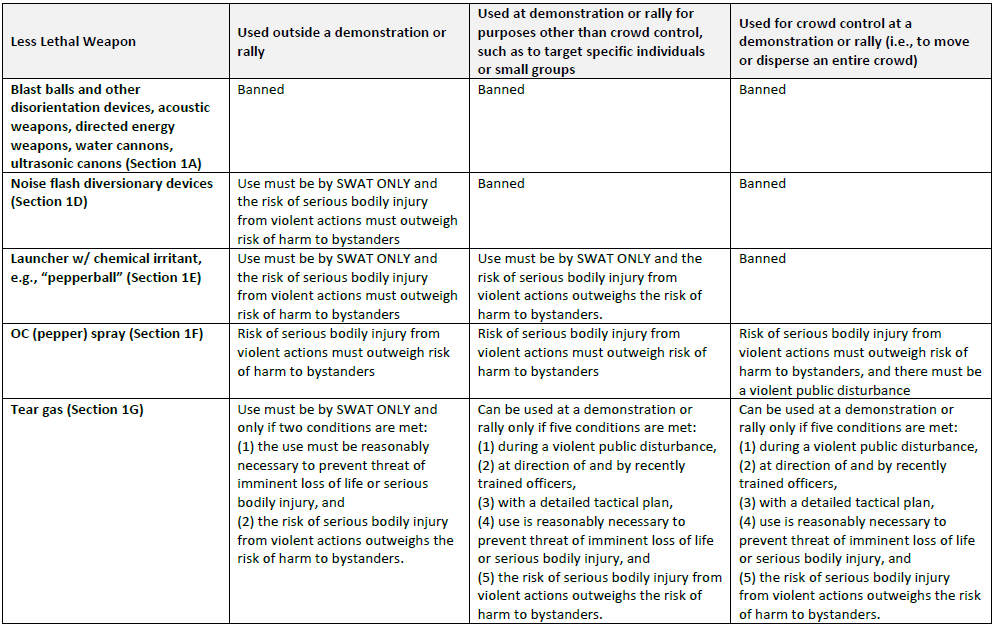 Herbold positioned the new bill as addressing issues raised by the DOJ and “recent court decisions.” She said that the DOJ raised two concerns addressed in the new bill: that restricting SPD’s use of certain less-lethal tools in crowd-management situations could lead to officers using greater levels of force; and that there needs to be sufficient time for SPD to retrain officers on the new policies before they go into effect. Herbold also noted that Judge James Robart, who oversees the 2012 consent decree, recently approved an update to SPD’s crowd-control and use-of-force policies that the department had developed, and so any changes the Council makes that conflict with that policy might not be approved by the judge.

SCC Insight reached out to Assistant U.S. Attorney Christina Fogg, who leads the DOJ’s team on the consent decree, and to the court-appointed police monitor, Dr. Antonio Oftelie, as to what feedback they had provided Herbold. Both Fogg and Oftelie said that Herbold had held a phone briefing with them, and neither provided written feedback — though Fogg confirmed that she raised the two concerns that Herbold had cited:

“First, to be clear, we did not take a formal position on the draft bill, because DOJ does not comment on pending local legislation. However, given our previous filing for a TRO (in 2020) and the subsequent preliminary injunction, we thought it appropriate to engage with the City at this early phase in the hopes of avoiding future disagreements on these issues (i.e. when the changes are being implemented through changes to SPD policy, which are subject to DOJ review under the Consent Decree).

In terms of the what we conveyed to Council, we did not provide anything in writing. However, I can convey the substance, which is that we expressed concern about the potential that restricting the use of certain less-lethal tools in crowd management circumstances could actually lead to officers using higher levels of force, putting both assaultive protestors and the surrounding non-violent protestors at higher risk of harm. In order to ensure that such an outcome does not occur, we asked how officers would be instructed to respond in circumstances where SPD’s previous practice involved the use of a less lethal tool that would now be prohibited. For example, in circumstances where officers were previously trained to use OC spray at an assaultive person three or four lines deep into an otherwise non-violent crowd, what would they be instructed to do instead? We did not prescribe a specific revision or approach for how the City should respond to the question. We also inquired as to whether the draft bill will provide time for relevant SPD officers to be trained to changes in policy, again, to avoid the unwanted impact of having untrained officers resort to higher levels of force than necessary.”

Oftelie stated that he was waiting to review and advise Judge Robart once the Council passes a bill:

“The Monitoring Team didn’t have any written questions or feedback on the previous draft of the ordinance. We had a phone-based discussion with Herbold and Gonzalez in which they briefed DOJ and the MT on the bill.

It looks like this revised version of the ordinance has a required review by the Court prior to (Section 5. Section 1 of this ordinance shall take effect and be in force 30 days after the Court in United States v. City of Seattle, Western District of Washington Civil Case Number 12-cv-1282, has approved the revised policies required by Section 4 of this ordinance.) effect, so the MT and DOJ will review and advise the Court once the ordinance is passed by the full Council.”

When asked why he declined to provide feedback at this point, Oftelie expanded on his previous comment, and also expressed his disappointment at the Council’s approach:

“The [Monitoring Team’s] role at that time was to ask some substantive questions on intent – mostly directed towards the process of getting more input from stakeholders before moving legislation forward. Once the legislation moves forward there will be some process (not yet defined) to put the ordinance in front of the Court for review.

My hope in all of this is that SC would work more directly with the Mayor’s office, SPD, and the accountability partners (OIG, OPA, CPC) to draft a comprehensive, evidence-based, and pragmatic new policy. But so far SC has chosen to work on this on their own which is disappointing.”

So it appears that both the DOJ and the police monitor are withholding judgment for the time being, making Herbold’s job more challenging in trying to write, as she put it this morning, “the strongest legislation possible within the constraints of the consent decree.”

At the moment, the timetable for moving the bill forward is uncertain. Herbold’s next committee meeting is scheduled for July 13. According to a spokesperson for the City Council, “It’s possible the legislation could be heard for a vote at that time, and then it would go to Full Council.”