This morning, the Council’s Transportation and Utilities Committee voted to move forward a bill to allow SDOT to dramatically increase street parking rates around the Seattle Center during large events, in preparation for the opening of Climate Pledge Arena in October.

The parking rate proposal is part of a larger plan by SDOT to make changes to street parking in the Uptown area, which includes expanding the areas of both the existing Restricted Parking Zone (RPZ) and metered parking. And those changes accompany ongoing transit, bicycle and pedestrian improvements to the area as well, many of which are prescribed under the Arena Access Management Plan as part of the arena redevelopment program (see this presentation from last August). 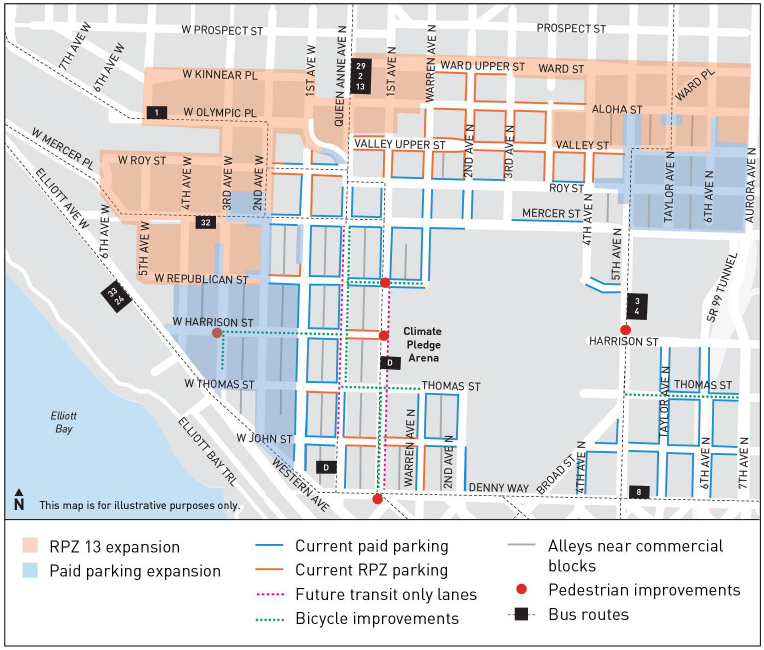 Currently SDOT has authority to charge between fifty cents and five dollars per hour for street parking throughout the city. As it has upgraded the metered street parking systems over the past few years it has given itself the flexibility to adjust prices over the course of the day, with the goal of around 80% utilization of street parking (so one doesn’t need to drive far to find a parking spot). The electronic payment systems give the city enough data to determine precisely the peaks and valleys of parking demand, and to raise and lower prices accordingly.

However, the Uptown residential and commercial area surrounding the Seattle Center creates extra challenges with large events: even at the current maximum rate of $5 per hour, street parking is far less expensive than garage parking (which can cost up to $80 for an event). That leads drivers to circle neighborhoods looking to score a street parking spot — while wasting gas, polluting the air, and creating traffic jams.

SDOT has asked the Council to increase its cap on street parking rates to $12 per hour during large events. However, it doesn’t plan to max out the rates immediately; rather, its initial plan is to charge a low rate for the first two hours, then increase it to $8 an hour for hours 3 through 5. The $12 legislated cap is to give the department some room to make ongoing adjustments — both up and down — over several years, as part of its long-term goal of keeping utilization at about 80%.

As originally written, the bill would have given SDOT authority to set rates up to $12 per hour anywhere in the city during events with at least 10,000 attendees, such as an NHL game at Climate Pledge Arena or a Mariners game at T-Mobile Park. However, Councilmember Morales successfully pushed through an amendment to the bill today which would limit the authority to within one mile of Seattle Center, effectively excluding the stadiums for now. Morales said that she had heard from residents and business owners in Pioneer Square and the Chinatown-International District that the city had not yet consulted them on the impacts of the parking rate changes. SDOT acquiesced to the geographic limit, saying that Seattle Center was the immediate priority, though it would like to address the stadium areas in the near future.

The amended bill passed out of committee unanimously, and will come before the full Council for final approval next Monday.