Between a Council committee meeting in the morning and a court hearing in the afternoon, the Seattle Police Department has a lot going on Tuesday.

At Tuesday morning’s Public Safety committee meeting, the Councilmembers will take up again the issue of moving SPD’s parking enforcement unit out of the department as part of their overall effort to downside the police. There isn’t any serious debate about moving the PEOs out; but there has been significant debate about which department to move them to — including among the PEOs and their supervisors. One proposal would move them into the newly-created Community Safety and Communications Center (CSCC); another would send them to SDOT instead. The former would potentially create other opportunities for the PEOs to contribute to community safety programs; the latter wold leverage the existing partnership between the PEOs and SDOT’s Curbside Management Team while still allowing the PEOs to have an expanded role in traffic management.

In May the Council struck the PEOs out of a bill creating the CSCC and moving SPD’s 911 call center into the new department, kicking the can down the road and giving the two unions representing PEOs and supervisors time to confer and hopefully negotiate a preferred destination. There has been no announcement in advance of Tuesday’s meeting as to whether an agreement has been reached. The Council has hedged its bets: the bill as written would transfer them to the CSCC, but a proposed amendment that the committee might adopt would switch that to SDOT.

In that same committee meeting, the Council will hear a report on SPD’s quarterly finance and staffing, which the Council required of the department in order to track spending and attrition.

The Council received the report on July 23rd, and last week at the Finance and Housing committee previewed the findings in anticipation of this week’s briefing. The headline is that SPD’s officer attrition continues to run well above historical norms; in the first six months of 2021, the department lost another 100 officers — on top of the 186 separations in 2020. At the same time it hired 38 officers, so the net loss is 62. For the full year, SPD is now forecasting it could lose as many as 160 officers while only hiring 87, for a net loss of 73.

If true, that means that SPD’s salary savings will be as much as $15 million. You may recall that the Council flirted with cutting $5.4 million from the department’s budget, an effort that fell apart among debate over whether to accommodate some requests from Chief Diaz to allocate some of that funding to other uses within the department that would allow him to compensate for the high officer attrition.

The Council is now poised to resume that debate with even more money on the table — but Diaz is equally positioning himself to ask for more to address the even higher losses. In fact, the SPD memo says that the department is already planning to use some of the salary savings to address the extra costs directly attributable to attrition, including separation pay and deferred compensation.

In addition, SPD proposes $2.5 million for a form of hazard back-pay for department employees who were forced to work through the pandemic; $700k for startup costs for the new “Triage One” program; $340,000 for a new 911 dispatch protocol system that is expected to make it possible to plug in third-party service providers; and $2 million in additional funding for the King County Regional Peacekeepers Collective.

SPD also expects that it will need additional overtime budget year given that major events were restarted earlier than had been anticipated last fall when the 2021 budget was written. It is asking for $3 million. The good news is that it is asking before the end of the year, and it has a plausible reason; the bad news is that the Council reflexively opposes more overtime for SPD.

There are several other requests that Diaz is proffering, including an additional Community Service Officer unit, some technology investments, and finally finishing a new timekeeping an scheduling project that is years overdue (SPD still tracks schedules and timekeeping on paper).

Finally, SPD would like to spend some of the salary savings to ensure it hits its hiring goal, including contracting out background-checks and re-introducing hiring and retention incentive programs. 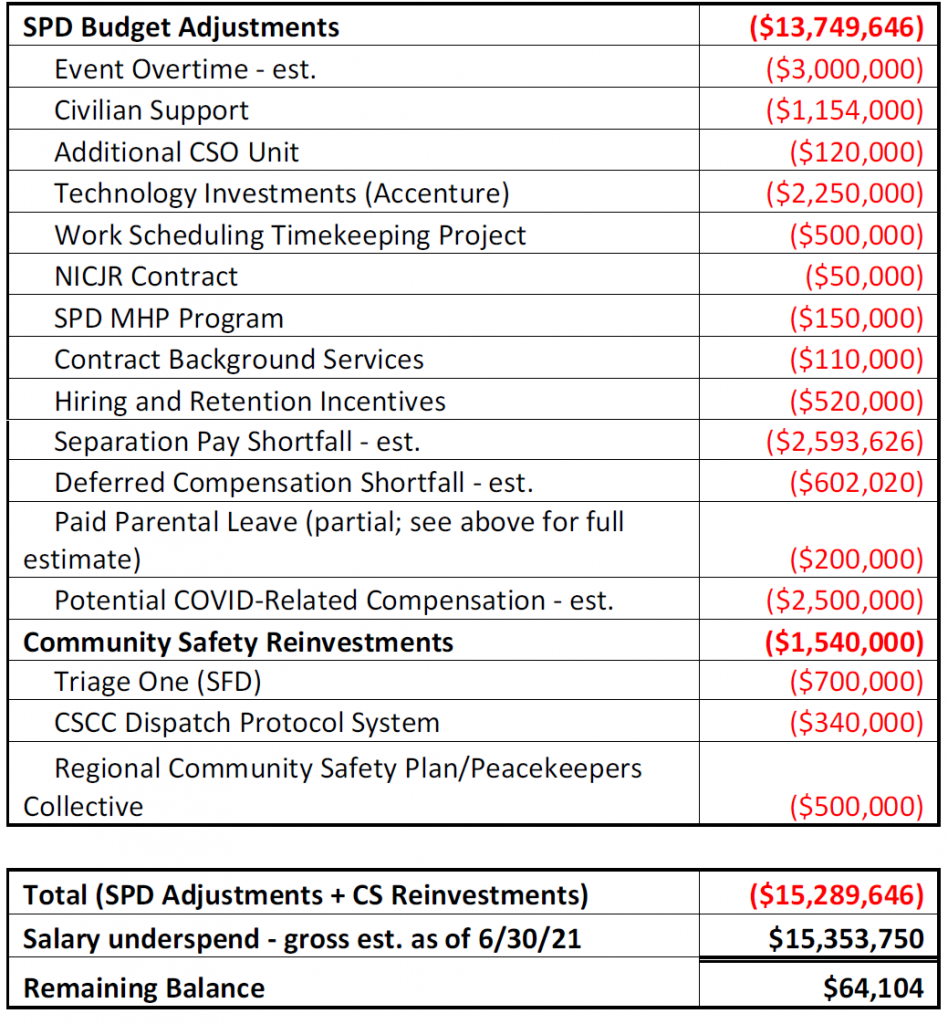 Councilmember Sawant will, of course, oppose all such expenditures, arguing for removing the entire $15 million for SPD’s budget. Morales has signaled in the past that her preferences are not that far away for Sawant’s on this issue. Mosqueda and Gonzalez, both running for office this year, will need to thread the needle on this issue — and especially Gonzalez who looks to be in a close race for Mayor. The other Council members may turn out to be more open-minded, but none of them will make this an easy layup for SPD and Diaz to keep some or all of the money.

Tuesday afternoon, U.S. District Court Judge James Robart has called a status hearing in the ongoing saga of the 2012 consent decree against SPD for its policing practices. He has not tipped his hand as to what he wants to discuss, though he will almost certainly give both the city and the DOJ opportunities to speak. He is also no doubt aware that the City Council has a pending update to the ban on less-lethal crowd control weapons that Robart enjoined last summer.

Last week, the Community Police Commission also requested an opportunity to speak at the hearing, in a filing with the court that also requested Robart to push hard on the court-appointed police monitor’s 2021 plan and the continued absence of a plan for how the city will come back into compliance on police accountability issues. Robart struck those other requests, but granted the CPC speaking time at the hearing.

Following the release of the police monitor’s semiannual report last week, on Friday the city filed its quarterly report with the court, detailing actions that SPD and the accountability partners (the OPA, OIG and CPC) have taken over the past few months. There are some interesting updates on the collective bargaining process as the city negotiates contracts with SPMA, the union representing SPD supervisors, and SPOG, the union representing rank-and-file officers. The report notes that negotiations with SPMA began in early 2021, and negotiations with SPOG are set to begin “after the City sets parameters” — a “confidential set of guidelines, priorities, and upper and lower boundaries that tell the City’s negotiators what type of contract the LRPC and City Council would be willing to accept.”

The quarterly report calls out the Council’s draft bill restricting less-lethal weapons, though it notes that the DOJ and police monitor have only provided informal feedback and won’t issue formal opinions on it until the Council passes it and submits it through the process detailed in the Consent Decree. It also notes that they are not putting it in front of Robart yet either:

Accordingly, at this time, it would be premature to brief the Court on the contents of the bill or submit it to the Court. As currently drafted, the bill provides that its restrictions on the use of less lethal weapons do not take effect until after the Court has reviewed and approved them. The City will continue to keep the Court apprised of further developments.

The last time Robart called a hearing, he had “harsh words” for the Council for their attempts to “defund” SPD, which in his eyes would have left it unable to fulfill its constitutional policing duties under the consent decree. It’s hard to predict what Robart might be thinking now: the Council explicitly waited to take a final vote on its less-lethal-weapons ban until after this hearing in case Robart had thoughts to share on it (though since it’s not formally in front of the court, he probably won’t dive into the details). He might also have ideas on the Council’s mixed signals on further cuts to SPD’s budget in the face of Chief Diaz’s pleas to provide him with predictability about what his budget will be for the rest of the year. Robart is also known for following local news, and is no doubt aware that City Attorney Pete Holmes just lost his bid for re-election, with a police abolitionist and a “tough on crime” Republican advancing to the general election in November

We will learn more Tuesday afternoon when Judge Robart speaks his mind.