It’s only Tuesday, and this week has already been super busy on the city budget front. In addition to passing a mid-year budget update out of committee today, the Council also got a revenue forecast update from the City Budget Office, and it released the schedule for ts upcoming 2022 budget development process.

The revenue forecast was generally good news. The federal stimulus package seems to have done the trick; in the second quarter of 2021 the economy took off. Despite warnings that people were holding their stimulus checks in their bank accounts, it turns out a lot of people went out and spent them: personal outlays skyrocketed in the second quarter, and retail sales followed suit.

You may recall that in April economists were giving equal probabilities for “baseline” and “pessimistic” national economic forecasts, given the unclear timeline for the next federal stimulus package and the slow rollout of COVID vaccines. But now with 20/20 hindsight, here’s a graph of how much the economy outperformed “baseline” and “pessimistic” scenarios in the first half of 2021 (mainly the second quarter): 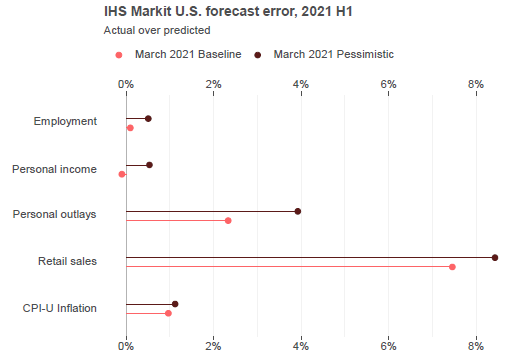 You can see the extent to which personal outlays and retail sales dramatically outperformed even the baseline scenario.

Employment is a different story altogether. Both nationally and in Seattle, employment is recovering more slowly — but in a different way than in past recessions. The drop in jobs happened dramatically, with a very speedy partial recovery, and then it shifted into low gear (with some signs that it might be starting to pick up again). Currently both nationally and locally we’re off about 4.5% from pre-pandemic employment levels. 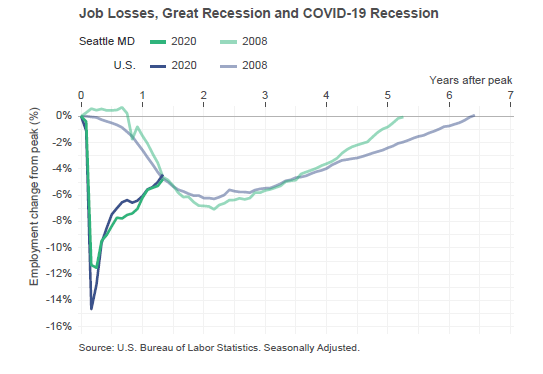 However, job openings are now at a record high, and wages are significantly up. 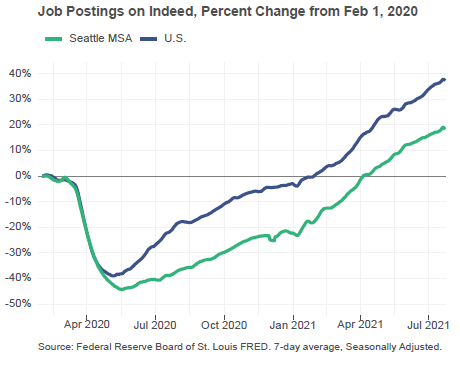 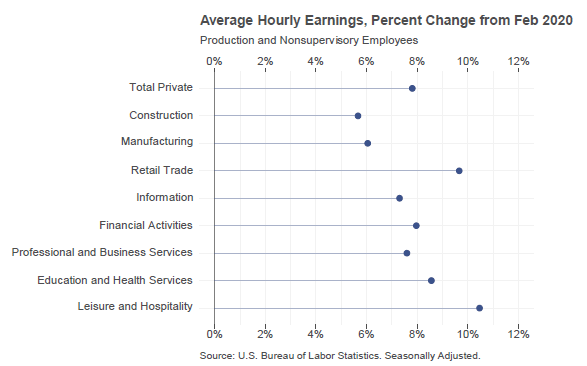 At the moment, this unique situation is being attributed to a shortage of workers. Economists are citing a combination of contributing factors:

Here’s a graph of what’s happened to employment in the Seattle metropolitan district compared to pre-pandemic. Some sectors are approximately back to where they were eighteen months ago; but manufacturing has still been hit hard, and the hospitality industry is only now starting to come back to life. 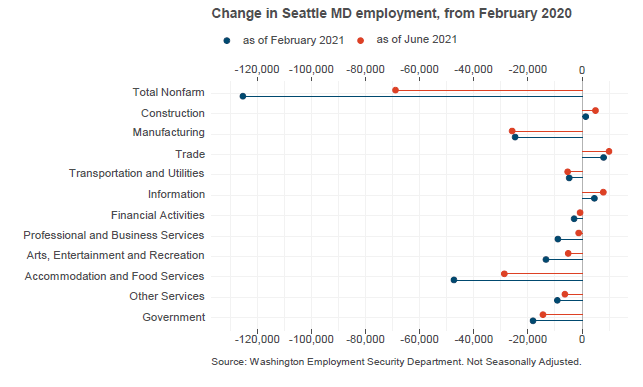 There are other dynamics at play too, most notably what’s happening with office workers. Nationally office space vacancy rates are running a few percentage points higher than before the pandemic, but in Seattle and neighboring cities, it’s much worse. In Seattle’ central business district, vacancy rates are over 20%. 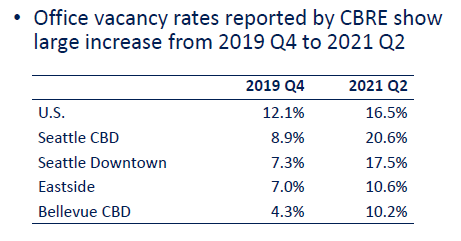 In Seattle’s case, it is suffering from having a bounty of “remote-friendly” jobs; that is depressing demand for office space.

Seattle’s office demand, as of June 2021, was only at 71% of pre-pandemic levels. Worse, it actually dropped seven points in the second quarter. 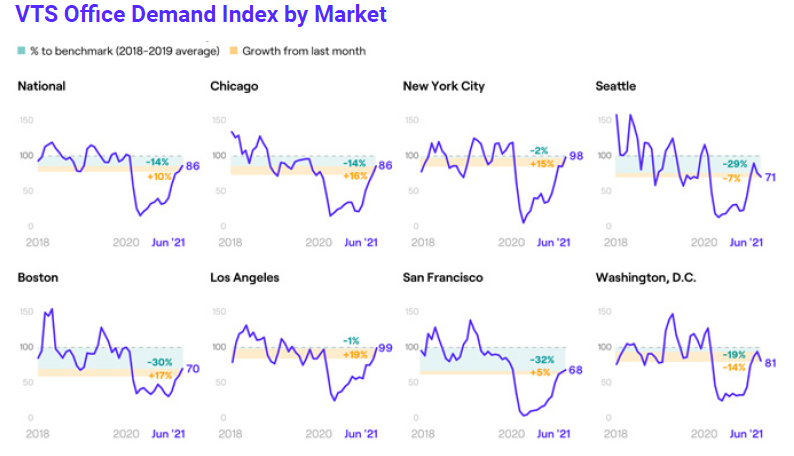 We can see this reflected in the count of office workers downtown, which is still at 20% of 2019 levels and is not budging. 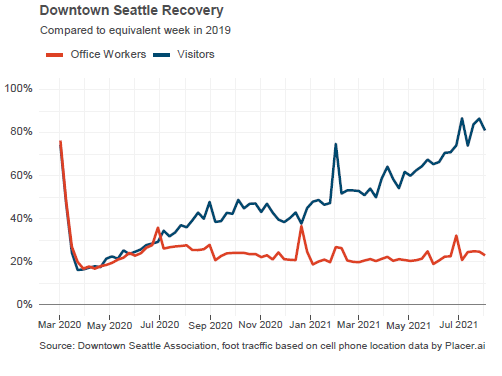 (one note of explanation on the above graph: the large, brief spikes in “permit intake,” aka new permit applications, are tied to the dates where new, more restrictive zoning and construction regulations take effect, as developers rush to vest their project with the old rules just before the deadline)

So in short, the economic analysis tells us:

With that, we can turn to the city’s economic and revenue forecasts. Given that in the second quarter the national economic indicators tracked with the baseline model and economists have now shifted to a 50% probability of the baseline forecast being correct (and only 20% probability for the pessimistic model), the City Budget Office has now switched to basing its revenue estimates on the baseline instead of the pessimistic forecast. Those forecasts predict that national employment should return to pre-pandemic levels by the end of 2022, and by then personal outlays should be tracking with the expected trendline before COVID hit. 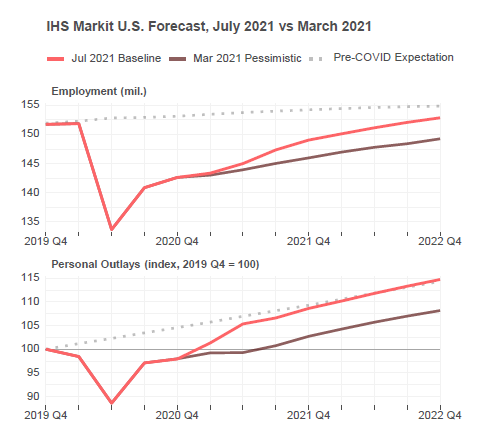 The forecasts for the Seattle metropolitan districts are very similar, with even more dramatic upward revisions. 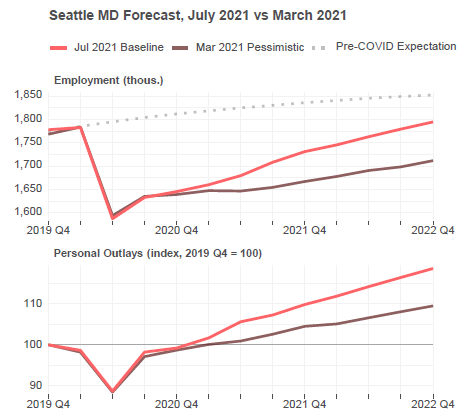 There are of course risks to these forecasts, including COVID’s resurgence, inflation, and a worker shortage.

The City Budget Office gave the Council one more jolt of good news today: with the booming economy in the second quarter, several categories of revenues are running significantly over forecast — and total revenues are now expected to come in over $52 million higher for the year. Nearly all of the additional revenue is “general fund,” which gives the city the most flexibility in how to spend it. Over $36 million of that is two line-items: sales taxes and B&O taxes, which is consistent with the consumer spending data we’ve seen. The city also recalculated its payroll tax projections using updated employment figures from the state, and revised up its 2021 revenue estimate by $3.4 million to a new total of $217.7 million.

In addition, with the early reopening of the economy admissions taxes are now projected higher. However, REET revenue estimates are unchanged: real estate prices are higher, but the volume is lower.

The numbers aren’t quite as rosy for 2022, though they are still quite good. B&O tax continues to roar back according to the city’s projections, but earlier forecasts had already built in assumptions of a fairly robust recovery in 2022 so there isn’t much additional upside. Interestingly, while school zone traffic cameras are expected to bring in over $10 million next year, the revenue estimates have been revised down due to delays in installing all eleven cameras that are currently planned.

At the same time, there are some one-time windfalls that need to be taken into consideration. This year the city recognized $66.5 million in income from the sale of the Mercer Megablock property. It also got a huge amount of federal COVID relief dollars, both the first tranche of its ARPA funding and some specific federal program grants. Next year Seattle will get its second and last tranche of ARPA funding, but it’s unclear what it might get from a federal infrastructure bill — assuming Congress passes one. But the city will also have payroll tax revenues to offset the loss of grant funding. By the city’s estimate, general government resources will be about $1.74 billion in 2022, $35 million less than this year’s current forecast.

That brings us back to this year’s revised revenue forecast, which is now a $52 million wad of cash burning a hole in the City Council’s pocket. There will, of course, be temptations to spend some or all of it this year. Perhaps the biggest limit on that will be time: with the mid-year supplemental budget ordinance passed out of committee this morning, the Council in recess until September, and the 2022 budget process starting on September 27th and running until the week of Thanksgiving, there is little time for the Council to consider additional spending bills this year. They may, however, fold one into the 2022 budget process, as they have in past years; and this morning Councilmember Herbold did suggest that she might offer a last-minute amendment to the mid-year supplemental budget ordinance when it comes up for a final vote on September 13th. But on the other hand, the Council might simply decide to carry over the excess revenues into 2022 and use them to offset the slight decrease in expected revenues next year.

And speaking of the 2022 budget, this morning budget chair Mosqueda released the schedule for the fall budget development process. It begins on Monday, September 27th, with the Mayor’s delivery of her proposed budget for 2022, followed by three days of department presentations on the details of the proposal. Like last year, the Council will then step through four stages:

Council President Gonzalez, who holds the power to create select committees (including the Select Budget Committee) and determine their rules, flexed her muscles this morning too, distributing a memo outlining the rules and deadlines for Councilmembers to submit proposed budget amendments — and stating that the rules and deadlines will be strictly enforced.

So there you have it: the city looks to be in the black by a comfortable margin for the remainder of 2021, and seems to be well-positioned for the 2022 budget process, which kicks off September 27th.