This afternoon the Human Services and Public Health Committee received the second part of a briefing on the city’s overall response to the homelessness crisis. Part 1 was focused on the immediate, emergency response; today’s presentation was about the long-term investments being made.

HSD Director Catherine Lester (who at this point should have her name engraved on a chair after spending so much time in Council chambers) brought with her several key partners, including Mark Putnam from All Home, Katie Miller, the regional coordinator for the U.S. Interagency Council on Homelessness (USICH), and Barbara Poppe, who was a key leader in Columbus, Ohio’s response to homelessness, went on to service as Executive Director of the USICH,  and is serving as a consultant to HSD as they formulate their plan.

The briefing began with a fascinating set of statistics which, as Lester said, “set the table” for the bigger conversation. She started with the results of last month’s One Night Count of homeless for Seattle and King County:

You’ve probably seen these stats already: the homeless count ticked up a bit in Seattle, and more significantly in King County outside of Seattle. HSD drilled further into the details, noting that most of the increase was in people living in vehicles: there were 1100 in King county last year, and 1600 this year. Also worth noting: people in shelters are not counted; only people in encampments  (authorized or otherwise) or on the streets are. Which means that it’s really a count not of the homeless but of the unsheltered, and it’s a better reflection of the city’s short-term emergency response (since shelter capacity has increased in the last year) than necessarily a decrease in the number of people without permanent shelter.

They also presented data on income gains since 2000:

Household income is up substantially across the board, EXCEPT for African-American households. Anyone who believes that there is equal opportunity for all in Seattle needs to have this graph tattooed on the inside of their eyelids.

This slide generated lots of discussion, because it’s complicated and needs some unpacking to get at its key insights:

What this graph shows us is the radical shift in focus of federal policy on housing. In the 1970’s the emphasis was on housing programs for those who couldn’t afford it (the bar chart); but during the Reagan administration that was dramatically reduced in favor of tax incentives for homeowners (the grey area) — and the majority of that is tax deductions for mortgage interest. At the federal level we have largely abandoned the people with the greatest need; today only 1 in 4 Americans who qualify for a federal housing subsidy actually receives it. This represents, as Council member Burgess put it, “a gross injustice in what we’re doing to our most needy people.”

This last slide begins to tell the long-term investment plan for Seattle and King County, in its effort to make homelessness “rare, brief, and one-time.” 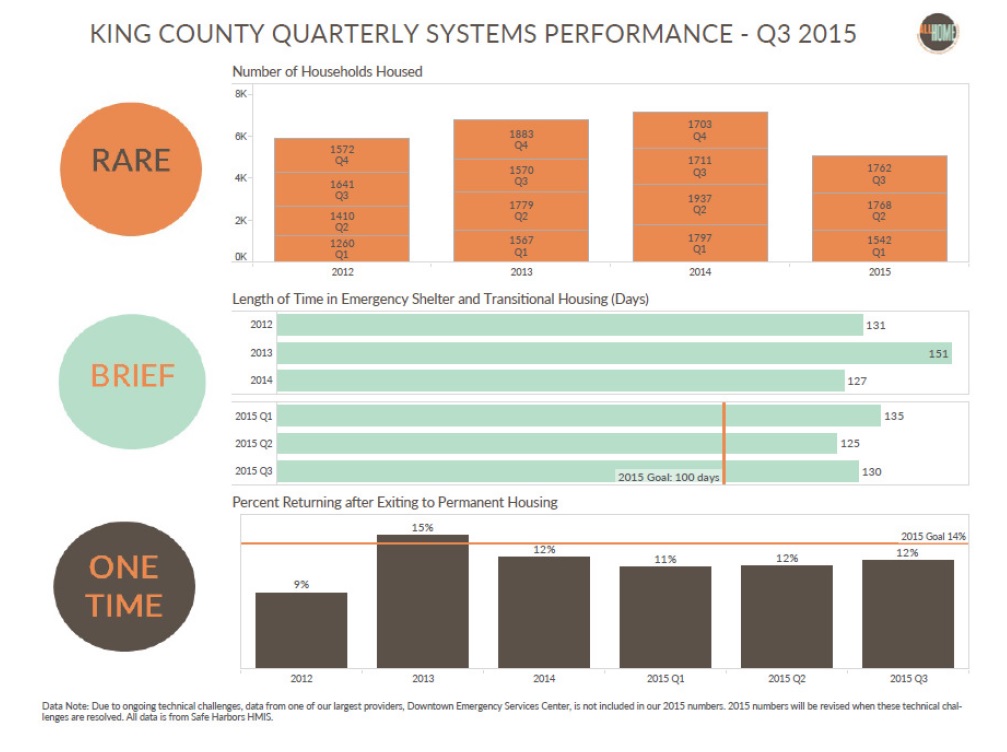 The emphasis is shifting to getting people into permanent housing quickly: if possible by diverting them before (or as) they enter the homeless system in the beginning; otherwise in 100 days or less. Currently the average time in emergency shelters and/or transitional housing is 130 days; Putnam said that they thought ideally they could get that down to 30 days. And it’s worth keeping in mind that this is for the people who couldn’t be diverted immediately because they have other issues that prevent them from getting permanent housing such as lack of proper documentation, etc.  And the system is moving people through today: about 1700 people per quarter were moved out of the homeless system into permanent housing, 7148 people in total. Part of the trick is that for many people the issues can’t be solved quickly, or in some cases ever, such as physical disabilities, addiction, or mental illness. Those people need “supportive housing units” that can provide the intensive services the person needs. There are now 3800 permanent supportive housing units in King County; a good start, but a fraction of what is needed.

It’s also worth noting that currently Seattle’s (and King County’s)emergency shelters are at capacity, and moving people more quickly out of shelters into permanent housing frees up shelter space to be able to help more people who need it — so solving the long-term problem also helps to solve the short term problem.

The people who work in this space aspire to what they describe as a “person-centered” approach focused on moving people along a continuum of care in which their needs are assessed and the right, custom-tailored set of service can be delivered to each person with the intent of getting to specific outcomes: managed health issues, permanent housing, assistive support for disabilities, etc.  Some people may exit the continuum of care completely; those with chronic issues may remain in it in some form for the rest of their lives.

HSD is retooling its approach to deliver an effective continuum of care through three major efforts:

Much more was discussed in the briefing, and I encourage you to watch it all here. (their presentation slides are here)  HSD and its partners will have a very busy spring and summer as they continue to collect data and assess program and resource needs, re-allocate funds, launch new tools, and roll out the portfolio contracting program.