The Parks Department presented their work on park property encroachments to the City Council this morning, and it wasn’t pretty. More than anything, it was a lesson on how much damage a bad presentation can do.

Donald Harris, Property and Acquisitions Manager for the Seattle Parks Department, is by all measures a Parks Department hero and should be lauded as such. After 47 years with the department — where he began as a lifeguard — he retires at the end of the month. That makes it even more of a shame that his last appearance in front of the Council went sideways this morning.

His team is responsible for, among many other things, enforcement of park property boundaries. Seattle parks have thousands of private property neighbors, and some of them (also in the thousands according to the presentation this morning) have encroached into adjacent parks land with everything from landscaping and decks to tool sheds, hot tubs, and even a zip line. Some of these are relatively harmless, such as when a backyard fence extends a foot out farther than it should — the sort of thing that happens between neighbors all the time and is usually a non-issue until the neighbors start fighting among themselves. Others are more egregious.

There are many reasons why the city needs to enforce property boundaries, and the Parks Department laid them out in their slides (though unfortunately didn’t spend nearly as much time in the actual presentation speaking to each of them): 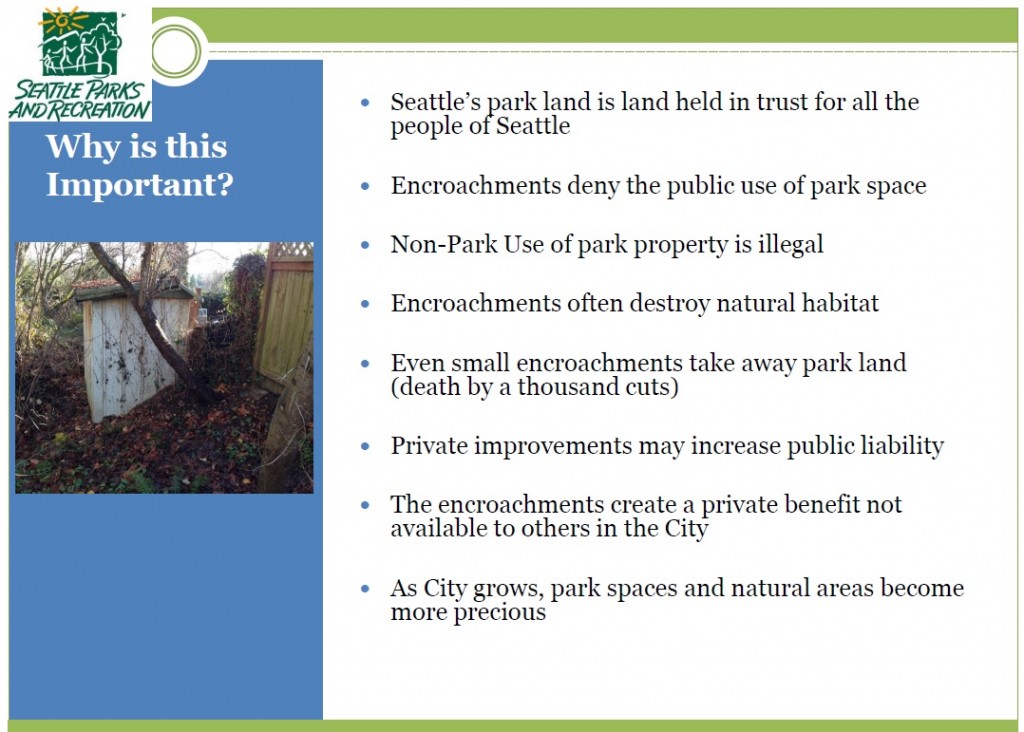 In particular they failed to elaborate on the natural habitat aspect: that the parks space provides habitat for birds and other wildlife, hosts trees that recycle our air, and helps to control water runoff. This gave Council President Harrell a chance later to jump on them for spending time enforcing property ownership of land that “no one is using.” But we’ll come back to that.

In 1996 laws were passed to increase attention on enforcement of park property encroachments. This became a mandate in 2008, but unfortunately an unfunded one. That was fixed in 2014 with the passage of Proposition 1, which finally funded staff in the Parks Department to focus on the encroachment issue. This is important context: focused enforcement of park encroachment is a very recent development, and the policies and priorities are not yet well established. They have a mandate to resolve at least 25 encroachments in 2016, and are choosing which ones to address using their best judgment and learning from that experience this year to help them develop clearer, better policies and priorities for future years. They are under intense pressure from environmental groups and parks stewards/advocates to enforce park boundaries against encroachments — though they are also under intense scrutiny from those who think it’s a waste of time and the city should be focused on other issues. Harris called out the comments thread in a West Seattle Blog post this morning as evidence of the strong feelings on both sides.

If Harris had said that at the beginning of the presentation, he would have saved himself (and the Council members) a lot of frustration and they would have had a productive conversation. He didn’t, and those details came out through the Council members’ pointed questions and critiques of their approach.

Harris made matters worse by cherry-picking a handful of encroachments to share with the Council. Those examples show the diversity, but not the prevalence, of the different kinds of encroachments. Worse, he started with one that in part represents probably the least beneficial kind to enforce: 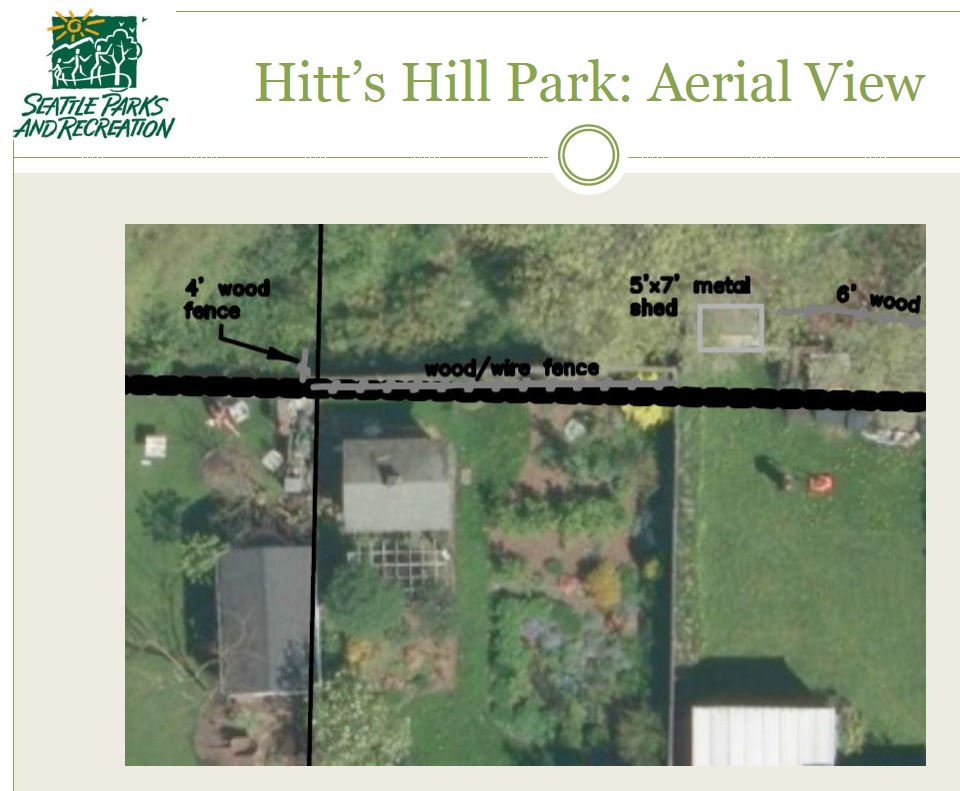 While the bottom-right lot has extended a fence several feet into the park and places a 5’x7′ metal shed in that space, the bottom-center lot has simply erected a fence about a foot into the park, probably by accident in order to square off a diagonal boundary line. Harrell again jumped on this and questioned why they would spend effort (and city money) trying to get the fence moved. He also pointed out that we don’t know the property owner’s situation, and the cost of moving the fence could be a substantial financial burden for them.  That was the first foray into a much larger discussion — and probably the most productive part of the whole briefing — about how the Parks Department learns about encroachments and how they are prioritized for enforcement. Many encroachments are discovered by neighbor complaints; many others are found by parks staff on the grounds doing maintenance work — such as this one where a homeowner build an entire extension of their backyard into park property: 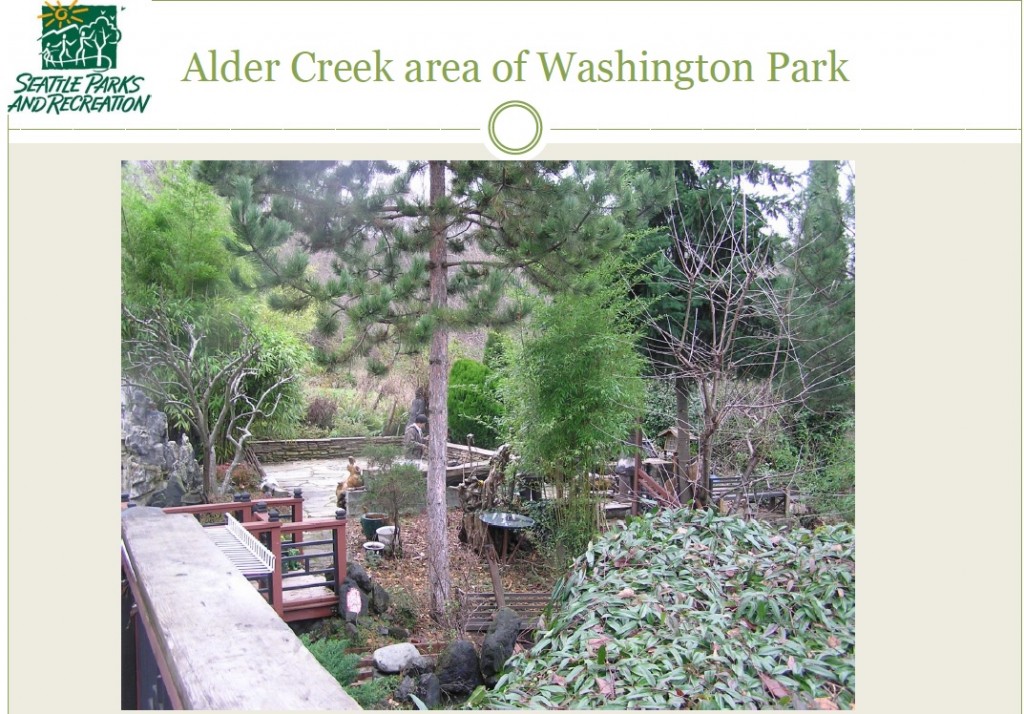 In defense of Harris and his team, they work very hard to take a common-sense and humane approach to resolving the conflicts within their mandate to enforce the property boundaries: for instance, they can issue permits to homeowners for park property (important because it deals with liability issues but also provides a mechanism for the encroacher to pay something since they don’t pay property taxes on the encroached public land). And they can create deferred payment programs for those permits when the encroacher can’t afford it.  They also try to prioritize projects where several property owners are encroaching, rather than singling out individual ones, such as adjacent to the Arboretum along 26th Avenue where around 30 owners are currently encroaching (and have known for years that they were doing so).

Committee chair Juarez pointed out that prioritization is difficult; past experience with street light repair shows that citizen complaints are not an equitable method for prioritizing work as they introduce all sorts of cultural biases based upon who is more likely to make complaints. She also pointed out that it’s important to distinguish between encroachments that are decorative, such as this one along Magnolia Boulevard, from those that are serving an important need, such as where an encroacher is growing food. 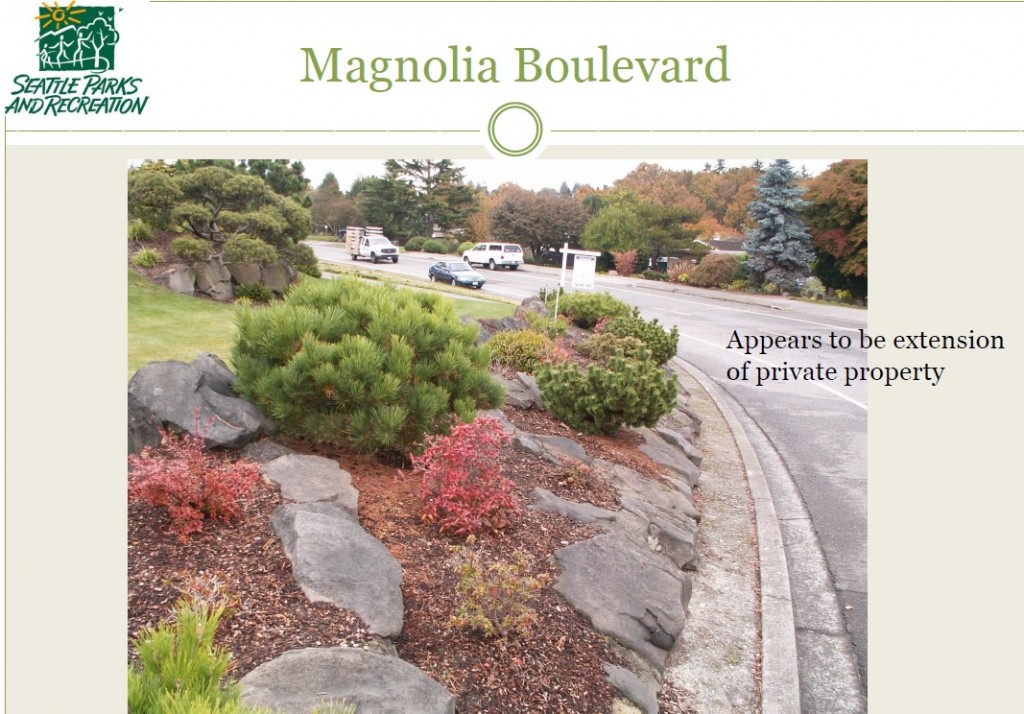 The Council members were very interested in a further conversation around a written policy for prioritizing encroachment enforcement. Council member Bagshaw argued that the priority should be based upon where there is significant public benefit for the expense that the city incurs by going through enforcement procedures. They stressed that the policy should be uniform and consistent, and that the Racial and Social Justice Toolkit provides important input into these sorts of issues. Harris agreed to come back with written priorities and policies, though it wasn’t clear whether that would be later this year or as part of their 2017 plan. Both Harrell and Juarez noted that they wanted to see a “win-win, common sense approach.”

Again, in Harris’ defense, he and his team are good people doing good work, trying to have a humane, “neighborly,” common-sense approach; they just haven’t codified the rules they are using. And therein lies a challenge, since a policy that is common sense, humane, and responsive to individual needs might not look uniform and consistent — at least on the surface.

But even his “wrap up” list of next steps caused problems for him, emphasizing the short list of encroachments they had shown (including the ones that looked like low priorities) and further suggesting that they were struggling to prioritize correctly. Harrell didn’t let that pass without further critique. 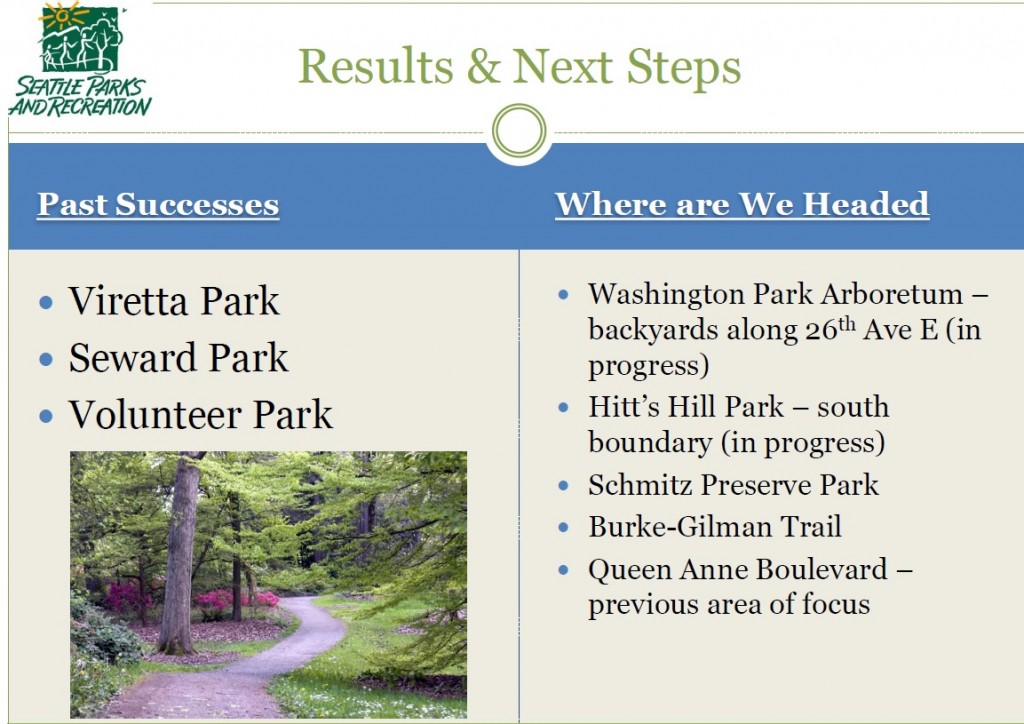 Harris had many “unforced errors” in the presentation by choosing to offer a look at the “flavor” of the issue rather than provide a more comprehensive look. He also missed scoring some easy points, such as delivering to each Council member a map of encroachments in their district. In the new reality of district-based Council positions, it’s quickly becoming common practice for  the Council members to ask for a map of data relevant to their own district (and Juarez asks for this more than any of her colleagues). That suggests that he and his boss, Parks Director Jesus Aguirre, didn’t do their homework well in speaking with Juarez in advance of the presentation to negotiate the questions and issues to address.  They also didn’t anticipate the questions that the Council members would ask, many of which were obvious. My guess is that after the hits they took today, Aguirre won’t make those mistakes again. Further, it’s a lesson in how important it is for executive branch directors to be in close communication with the Council member(s) who chair the committees that oversee their department. Contrast that with HSD director Catherine Lester, who seems to be connected at the hip with Human Services and Public Health Committee Sally Bagshaw; tomorrow’s committee meeting will feature another update from Lester, at which she will no doubt be well-prepared, on point, and a smooth presenter.

As a small consolation this morning’s meeting ended with Aguirre and the Council members heaping praise on Harris for his 47 years of service to the city and promises to appear at his retirement party at the end of the month.

You can watch the video of the presentation here.